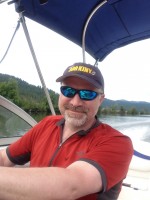 Shaun’s career with the Juneau Radio Center began on August 1, 1985 doing overnights on KINY. Over the past thirty years, his tenure included the afternoon show and Action Line on KJNO and afternoons on KTKU (back when it was Top 40). His love for music started in 8th grade while at Floyd Dryden when his fear of dancing led him to DJ’ing that continued throughout high school, college, and now runs a successful company (TheAlaskanDJ.com).

Born in Seattle, he moved with his family to Juneau in 1972 attending local schools, graduating from JDHS in the Class of 1981, and eventually marrying his high school sweetheart in 1985. He graduated from Western Washington University with a degree in broadcast journalism. He has worked with the State of Alaska since 1987 for the Department of Administration overseeing contracts and traveling throughout Alaska teaching procurement-related classes.