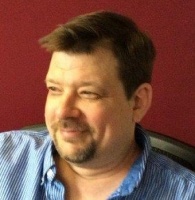 Jerry hails from Muscle Shoals, Alabama, “The Hit Recording Capital of the World” and has been a broadcaster since the age of fifteen. Jerry began his radio career out at one thousand watt daytime AM station, WSHF in Sheffield, Alabama doing a local call-in show similar to KINY’s Problem Corner. From There, Jerry moved on to the FM dial at WQLT and went on to program Rock 100 and Star 94 in his hometown before signing on with Clear Channel as program director for Power 92 in Jackson, TN and WTAK, Huntsville Alabama’s legendary rocker before launching his own voiceover business in 2007.
Jerry is married to JRC News Director Lori James and has three sons, who all made the trip from Alabama up to Alaska shortly following Jerry’s arrival. Jerry says that he might have been born an Alabamian, but he’s an Alaskan now.