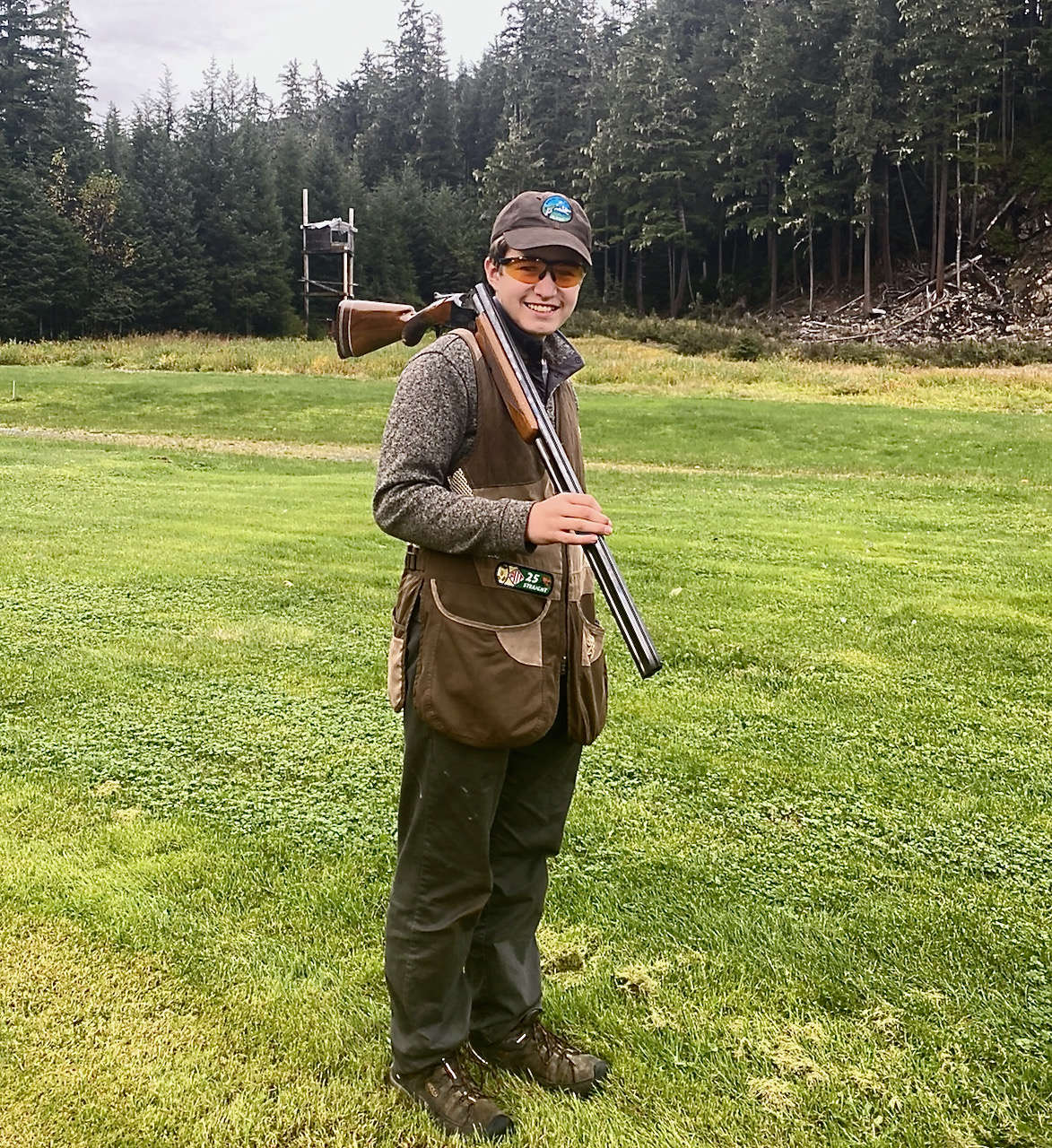 Trüge Hermann, 14, is the youngest Juneau Gun Club trap shooter to hit 100 targets in a row and one of just 15 shooters to accomplish the feat in the past 45 years.

Juneau, Alaska (KINY) - There is a new sheriff in town, so to speak, a new top shooter in the state of Alaska for sure as 14-year-old Trygve Hermann joined an exclusive club with an outstanding trap shooting performance for the Juneau Gun Club, registering 100 straight targets hit.

“It is one of the hardest things to do in competition trap shooting,” Juneau Gun Club caretaker Rick Carter noted. “He has only been shooting four years. The president of the JGC have been shooting for roughly 30 years and not hit 100 in a row.”

“It was really nerve wracking,” Hermann said of the moment hitting 100. “A lot of emotions going through my head. I didn’t let out a yell but the rest of my squad did.”

In trap shooting, clay targets, ‘pigeons’ or ‘birds’ are propelled from an oscillating machine, a ‘bunker’ or ‘house,’ away from the shooter into the air at varying angles on the same plain. The shooter knows the point of origin but not the targets angle. This differs from skeet shooting where two clay targets are propelled in a crossing pattern and mimic real bird flight more accurately.

“I like when you hit the birds and they disappear,” Hermann said. “I like it when birds turn into dust.”

“I just kind of mount, look at the bead and look out a little bit from the trap house,” Hermann said of his routine. “And then call ‘pull.’ You kind of just mount the gun to your shoulder where you are most comfortable with, snug it. Look down the barrel. Get your stance all right. Relax, take a deep breath, and then call pull. Yeah, get up to the line, get your feet positioned for the stance, get the mounting right, just kind of relax. Then call for the bird and just shoot it. Follow through though, follow the bird, be smooth.”

To shoot 100 straight you must do it during one of the eight events. You cannot spread it over multiple events. Shooters move through five stations, shooting five shots on each, taking a break, then repeating that four more times. They shoot 50 rounds on each of two trap fields.

“As we were watching him get close to the 100 straight, breaking targets 96, 97 then 98, you could tell he was in the zone and his concentration was spot on,” coach Mark Kappler said. “You just knew he was going to do it. To be a good shot you must have concentration for each shot.  When it is your time to shoot, you must focus on the target and break it. Trygve has that ability. Word got out around the club house that he was getting close to shooting 100 straight and other shooters came out of the clubhouse to watch him break 98, then 99 and finally 100. A few yells went out and then everyone was clapping for him as he walked off the trap field. A great moment for the young man.”

Hermann said he did not have any expectations for the classic.

“I was just thinking I would hit and miss a couple birds maybe,” he said. “And then when I got to 50 straight I had to really concentrate on them. I kind of had to distract myself with my gun and random things around me. I was just looking at the shell and the letters on it and what it was like and what was in the shell. I was a little nervous when I hit 75 because I wasn’t sure if I was going to make it or not.”

“I was kind of thinking about that,” Hermann said. “I was like, ‘well, it all comes down to the last five shots.’ It was the same as always. Just concentrate on the bird and get your stance right.”

Things got real after 99. He had earned a 75-straight patch, achieved on his accumulation of hit ‘birds’ as he approached that 100-straight.

“I was very nervous on the last one,” Hermann said. “I was thinking if I missed the last one it would be 99 and I would still get a 75 patch but I really wanted the 100 one.”

That 100 straight number puts Hermann in rare company, as there have been less than 15 shooters to hit that mark for the Juneau Gun Club in the past 45 years.
Hermann also stands out as he is the first Sub-Junior - under 15 years of age - in the club’s history to shoot 100 Straight and his name will be added to the exclusive 100 Straight Club inside the JGC clubhouse.

The patches will go on his vest.

When asked if he felt like a celebrity Hermann said, “Maybe a little bit.”
Hermann also earned the Fall Championship Sub-Junior Championship in Event 8 - Handicap Championship - shooting 92 out of 100. Handicap tests a shooters skill by moving them back from the initial 16 yards to their average proficiency yardage - Hermann shot from 20 yards.

Hermann’s gun of choice is a 1953 Browning Superposed 12-gauge, the first over and under shotgun design to be produced. It was purchased from original owner and club shooter Jan Vandort. The length of pull - the measurement between the center of the trigger and the center of the butt - had been cut down from 14-plus inches to 13, so Hermann’s grandpa, Jerry Taylor, added a spacer to match the cut length. A dog had chewed on the grip of the buttstock and the teeth marks are still showing. The gun weighs eight pounds.

“It feels like 20 if you don’t take a break when shooting,” Hermann said. “It can feel like 20 more pounds on the end of the gun when pulling it up.”

He doesn’t have a nick-name for it like some professional shooters do.

Hermann prefers shooting singles from the 16 yard line. Competition doubles are also shot from the 16. His handicap - shooters are moved back when they become proficient at various yardage to challenge them - is at 20 yards. He has hit birds from 27 yards, the length of the gun club field.

He loves shooting ‘Annie Oakley.’ Members of the trap shooting team line up and a bird is propelled out and one-by-one members shoot. It is an elimination game that requires all the elements of trap shooting, just at a faster pace.

He has hit a bird from 27 yards - the length of the JGC trap field.

“You have to aim way under the birds to hit them,” he said. “It is not easy.”

Hermann, who is a freshman at Thunder Mountain High School and a member of the Falcons pep band, started shooting in 2017 at age 10 in the fifth grade. He hit his first 25-straight in May 2021 and first 50 last June. His current average is hitting 90% of singles and 76% of doubles.

“Practice,” Hermann said. “Just lots and lots of practice. You have to be really relaxed. Don’t get discouraged.”

He shoots with the Juneau Trap Team, a clay target shooting youth team in the spring and fall seasons and has been asked to join an adult team during winter league. His older brother Garret Hermann had been a shooter first, then his mother Janel Taylor joined in on the fun.

At the State PITA Trap Shoot in Fairbanks last June Hermann tied for the Handicap Championship hitting 94 of 100 targets competing against 25 adult shooters, and won the Sub-Junior Championship and various Class Championships in some events, totaling 1109 out of 1300. His mother won the woman’s championships there. The two often shoot against each other for high stakes - chores.

“I can never beat him,” Taylor said. “He would beat me by two birds or a bird or eight birds every single time. No matter how many we shot. And usually it is whoever loses has to wash the dishes, so it’s always me.”

Hermann said he doesn’t take it easy on his mother. 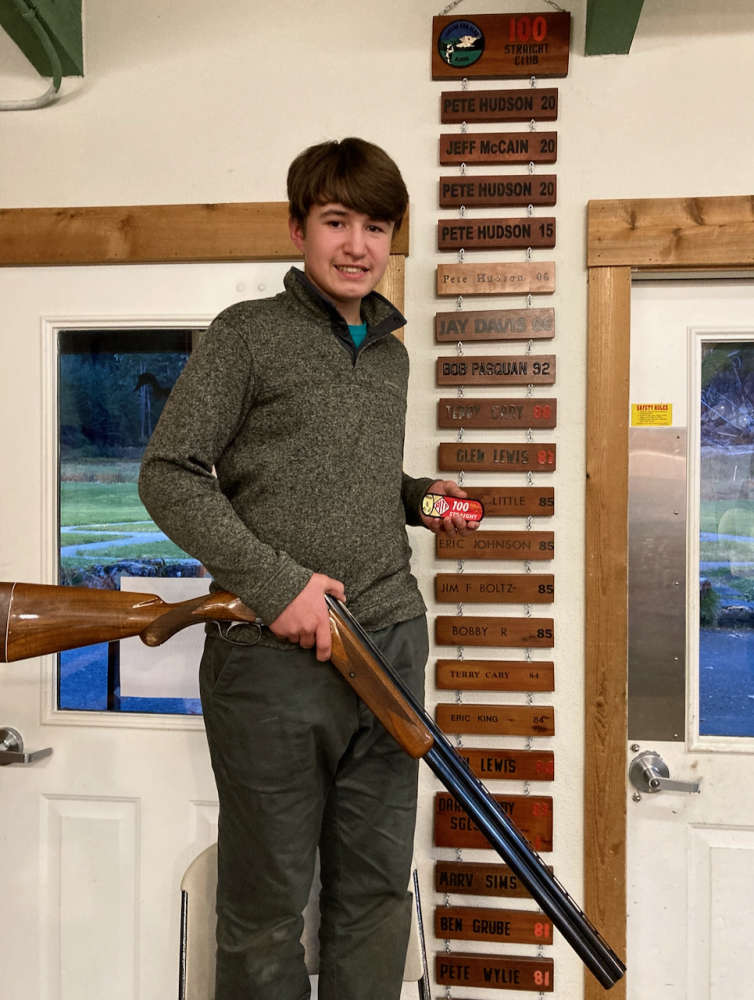