With CFP Title on Line, Georgia Gets Another Crack at ‘Bama 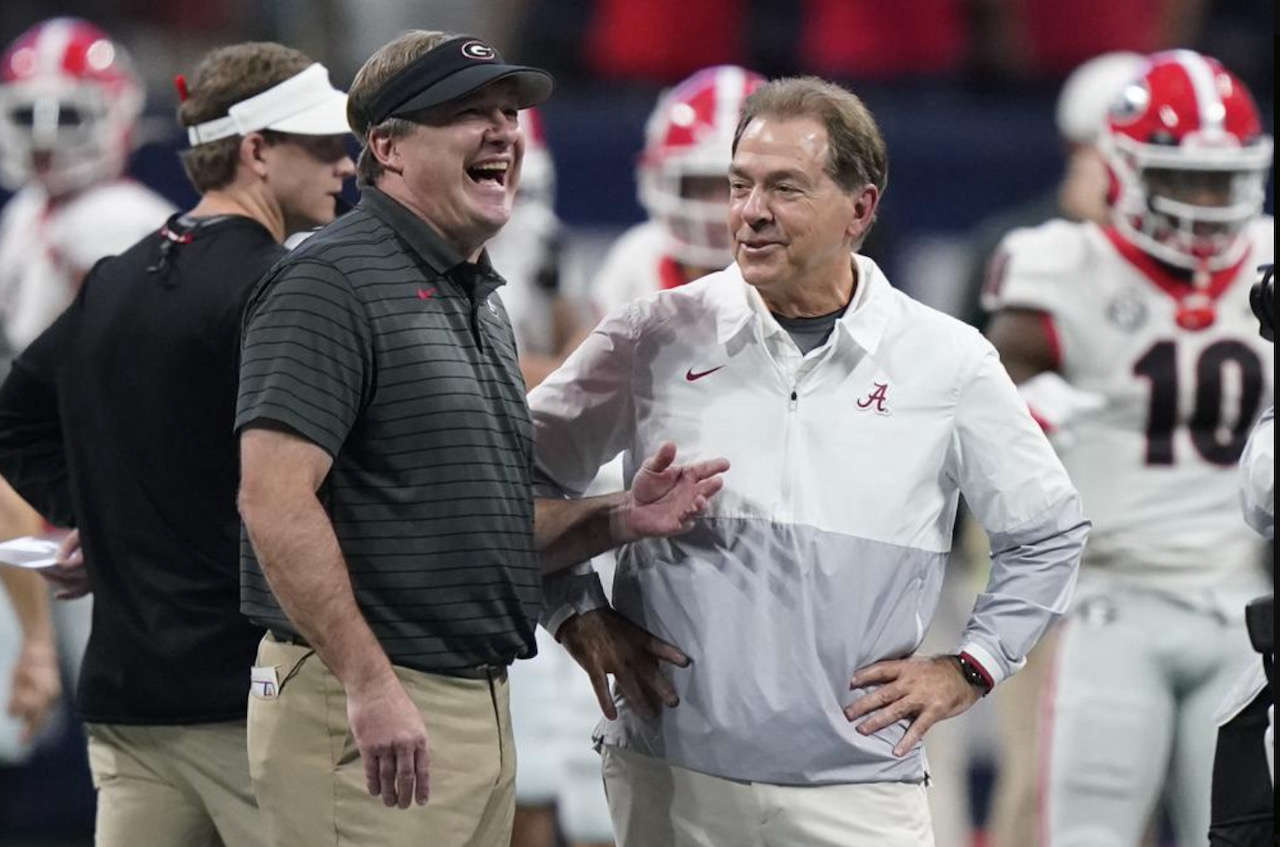 INDIANAPOLIS (AP) — Georgia coach Kirby Smart got an inside look at what it takes to build a college football juggernaut working for Nick Saban at Alabama for eight seasons.

Blueprint in hand, Smart took over at his alma mater in 2016, and the Bulldogs have been ascending ever since, going 57-10 in the last five seasons.

“I think the University of Georgia, Kirby’s program is probably one of the elite programs in the country,” Saban said Sunday.

But to truly be like ’Bama you have to beat ’Bama. Smart and the Bulldogs are 0-4 against the Tide.

No. 3 Georgia gets another shot to take down the king Monday night. The Bulldogs face the top-ranked and defending national champion Tide in all-Southeastern Conference College Football Playoff title game played in the heart of Big Ten country.

Five weeks after Alabama once again asserted its dominance over Georgia in the SEC title game, the Bulldogs drag the weight of a seven-game losing streak against the Tide and a 41-year national title drought into a rematch at Lucas Oil Stadium.

“I mean, it’s definitely motivation,” Georgia tackle Jamaree Salyer said of the losing streak to Alabama. “It’s the truth. You can’t really run away from the truth.”

The last meeting was especially painful for Georgia. The Bulldogs entered the SEC championship favored and undefeated, the unanimous No. 1 team in the country.

Georgia had stomped everything in its path behind a defense that was smothering opponents at an historically stingy pace before Bryce Young and the Tide picked the Bulldogs apart 41-24 in Atlanta.

“He is elite at what he does,” Smart said. “We’ve talked about him as Houdini because he can he can make people miss.”

Young adeptly avoided Georgia’s pass rush while throwing for 421 yards in a performance that essentially won him the Heisman Trophy.

How much of an outlier was the Alabama game for Georgia? The Bulldogs have allowed only 15 touchdowns this season. Five came against Alabama.

Georgia reverted back to form in the CFP semifinals, beating No. 2 Michigan 34-11 in the Orange Bowl. Davis and All-America linebacker Nakobe Dean led the charge defensively and quarterback Stetson Bennett rebounded from a tough game against Alabama with three touchdown passes.

“If you want to have any success in this game, offensively, you have to be able to at least control those guys up front and their front seven to some degree,” Saban said. “They have a very good defense in total but it starts with that.”

While Georgia is trying to win its first national title since Herschel Walker led the Bulldogs to the championship as a freshman in 1980, Alabama is looking to add to an unprecedented run.

The Tide is trying to go back-to-back as national champs for the second time under Saban. It would be title No. 7 for Alabama in the last 13 seasons, and its 13th overall in college football’s poll era (1936-present), more than any other school.

To find more successful runs in college football, you have look beyond the top of the sport.

North Dakota State currently has an even tighter grip on the second-tier of Division I than Alabama has in the first. The Bison won their ninth FCS championship in the past 11 years on Saturday.

Mount Union 13 won Division III championships over 25-year span from 1993-2017, including a string of six in seven seasons.

Georgia often has to go through Alabama just to win the SEC, though being in opposite divisions means regular-season meeting are rare.

The Tide’s winning streak in the series dates back to Mark Richt’s time as Bulldogs coach, and includes three SEC championship games and the 2017 national title game.

That game in Atlanta was the first — and until now the only —- CFP title game matching conference rivals.

The Bulldogs led 13-0 at half before freshman quarterback Tua Tagovailoa came off the bench to rally the Tide and force overtime. Georgia took an OT lead and had Alabama facing second-and-26 when Tagovailoa threw a 41-yard touchdown to fellow freshman DeVonta Smith for the win.

Georgia has not been back in the playoff since.

Smart said he didn’t return to the school where he played in the mid-1990s with the goal of building Alabama East and derailing the dynasty.

He understood the ceiling was high in Athens, Georgia, and those who support the program yearned for championships.

Smart insists he and his team do not feel the burden of history heading into Monday night.