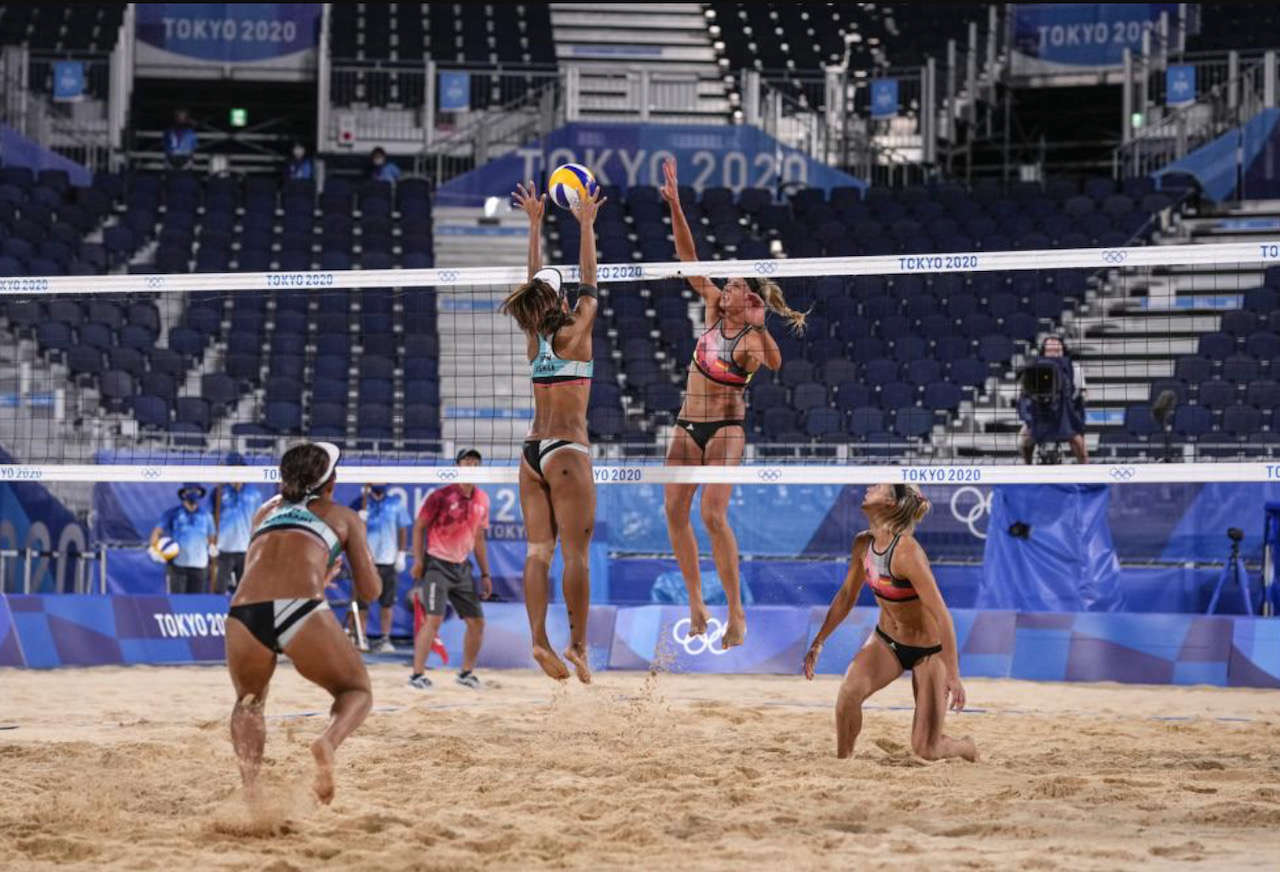 Miki Ishii, right, of Japan, attempts to block against Margareta Kozuch, of Germany, during a women's beach volleyball match at the 2020 Summer Olympics in Tokyo, Japan. (AP Photo/Petros Giannakouris)

TOKYO (AP) — No, women are not required to wear bikinis to play beach volleyball at the Olympics. Yes, TV cameras do tend to linger on their glutes when they hold their hands behind their backs to pass signals to each other. And no, that’s not a problem for the players who believe that those who see the sport will remain fans.

“I have always felt like when you get somebody drawn in, however you get them into beach volleyball, they fall in love with the sport,” said American April Ross, a three-time Olympian. “So, hopefully that happens also.”

Beach volleyball has been one of the most popular sports at the Summer Games since it was added to the program in 1996. It has fast action, a party atmosphere and some telegenic American stars who have paraded to the podium to claim six of the 12 possible gold medals.

But there’s also no doubt that some who tune in on TV are there to ogle the women as they leap and dive across the sand in their bikinis. In 2012, the London tabloids ran photo spreads from the beach volleyball venue without a set or spike in sight; it was also the focus for then-mayor and current British prime minister Boris Johnson, who penned a guest newspaper column during the Olympics that were taking place in his city.

The attention on the bikinis intensified in Tokyo after a viral social media post misidentified a team that protested a beach handball dress code as playing beach volleyball. Beach handball, which is not an Olympic sport, requires women to wear bikinis, and the European federation fined the Norwegians for wearing shorts as a protest at a competition 5,500 miles away in Bulgaria.

In Tokyo this week, the German gymnastics team wore full-legged unitards that went down to their ankles, eschewing the traditional bikini cut that ends high on the hip. The athletes said they were trying to combat the sexualization of young women and girls in their sport, which is trying to recover from a decades-long sexual abuse scandal.

The head of broadcasting at the Tokyo Games said this week said their feeds will not highlight sexualized images of female athletes, instead focusing on “sport appeal, not sex appeal.”

But beach volleyball players embrace their gear — and to them, equipment is precisely what the bikinis are — and choose it in almost all circumstances over more conservative attire.

WHAT ARE THE RULES?

The FIVB issued 22 pages of uniform guidelines for Tokyo, covering everything from fabric and color to names and numbers and how big manufacturers’ logos can be. Teammates also have to match.

An appendix has drawings of potential styles for women, including short sleeves and tank tops, long sleeves for modesty and long sleeves for warmth, long pants and shorts, and a one-piece bathing suit or a bikini. The men wear tank tops and board shorts, which can go over long-sleeved shirts and tights in cold weather.

There are also options for teams with religious dress codes.

“The FIVB beach volleyball uniform guidelines allow for a variety of different options,” the international federation said. “Beach volleyball welcomes all, and these uniform regulations ensure that our sport is culturally and religiously inclusive.”

WAIT — THERE IS MEN’S BEACH VOLLEYBALL, TOO?

Although the women’s side of the sport traditionally gets more attention -- including the prime-time U.S. broadcast slots -- a mirror-image men’s tournament has shared the sand at every Olympics since the sport joined the Summer Games in Atlanta.

Although the men wear tank tops and swimming trunks at the Olympics and on the international tour, they may play shirtless on the AVP domestic tour. Many choose to do so.

“Beach volleyball was a sport that was developed in Hawaii and Southern California and on the beaches of Rio,” Ross said. “And you play, and it’s hot, and then you go and jump in the water.”

One-piece bathing suits won’t work, because the sand gets inside and chafes; in fact, the players say, the less material that can trap sand, the better. Ross and her partner Alix Klineman, who helped design their own uniforms, also said it’s important that the straps don’t restrict her movement or breathing.

“For us, this is what feels most comfortable,” Klineman said. “You’re not wearing more clothing in really hot weather; getting sand stuck in places is not fun. But I totally respect other people wanting to be more covered if that’s what makes them more comfortable.”

Beach volleyball matches also proceed in all kinds of weather, including the rain from the leading edge of Typhoon Nepartak that dampened the Skiokaze Park venue this week. In Beijing, the Olympic championship was played in a downpour.

“This,” said American Misty May-Treanor, who was soaking wet but with a gold medal to show for it, “is just another reason why we play in bathing suits.”

DO PLAYERS EVER WEAR SOMETHING ELSE?

Some teams did wear leggings and long sleeves under their uniforms on the cooler nights in 2012, dismaying the London tabloids, but even then most opted for the traditional board shorts and bikinis.

Four years later, after the FIVB expanded Olympic qualifying in an attempt to spread the sport to new countries, the Egyptians played in long sleeves, a loose-fitting top, full-length pant legs and hijabs to cover their heads.

“I have worn the hijab for 10 years,” said Doaa Elghobashy, a member of the first beach volleyball team from her country to compete in the Olympics.

“It doesn’t keep me away from the things I love to do,” she said. “And beach volleyball is one of them.” 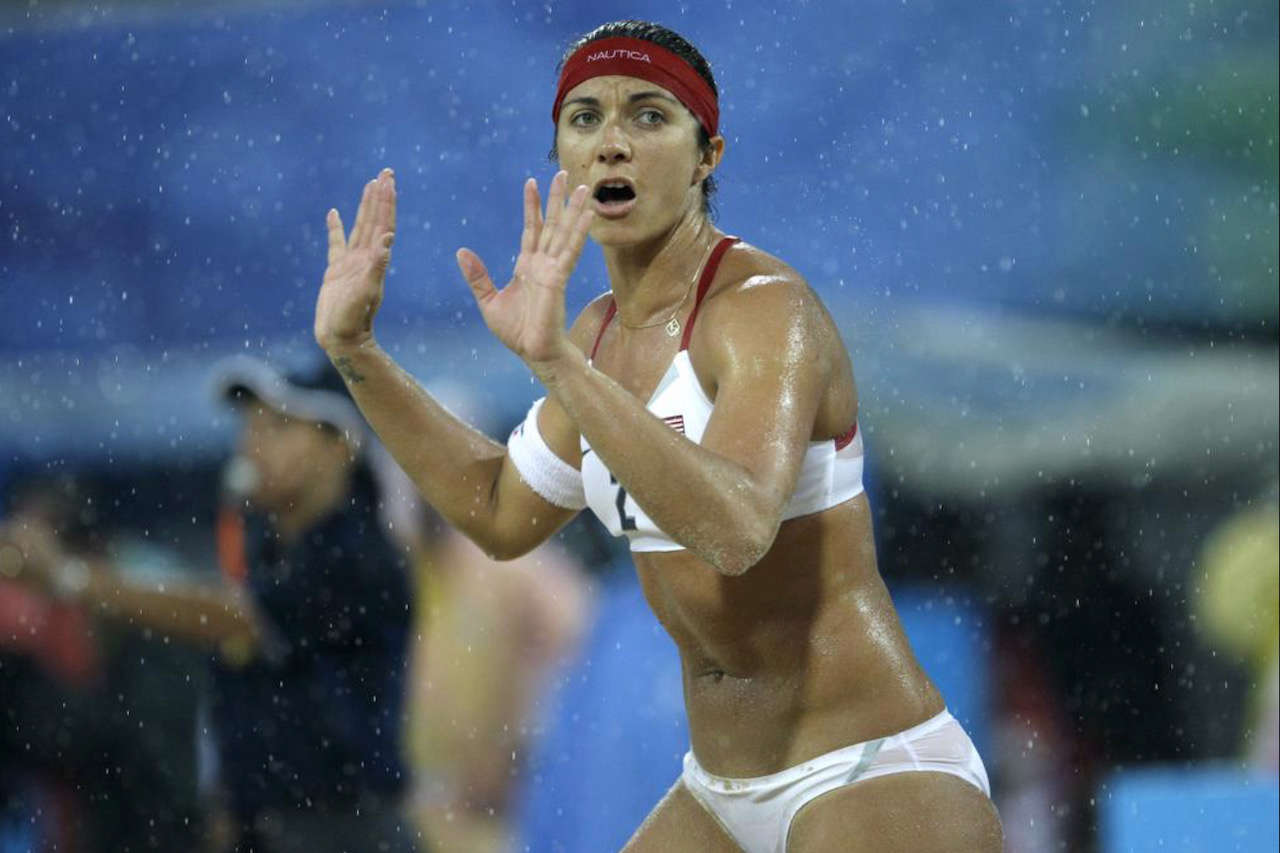 Above - In this Aug. 21, 2008, file photo, Misty May-Treanor, of the United States, reacts during against China in a gold medal women's beach volleyball match at the Chaoyang Park Beach Volleyball Ground at the Beijing 2008 Olympics in Beijing. Most of the women playing beach volleyball at the Olympics wear bikinis as their uniform, but it's not required. In Beijing, the Olympic championship was played in a downpour. “This,” said May-Treanor, who was soaking wet but with a gold medal to show for it, “is just another reason why we play in bathing suits.” (AP Photo/Natacha Pisarenko, File)

Below - In this July 25, 2021, file photo, Pauline Schaefer-Betz, of Germany, performs her floor exercise routine during the women's artistic gymnastic qualifications at the 2020 Summer Olympics, in Tokyo. The German gymnastics team wore full-legged unitards that went down to their ankles, eschewing the traditional bikini cut that ends high on the hip. The athletes said they were trying to combat the sexualization of young women and girls in their sport, which is trying to recover from a decades-long sexual abuse scandal. (AP Photo/Gregory Bull, File) 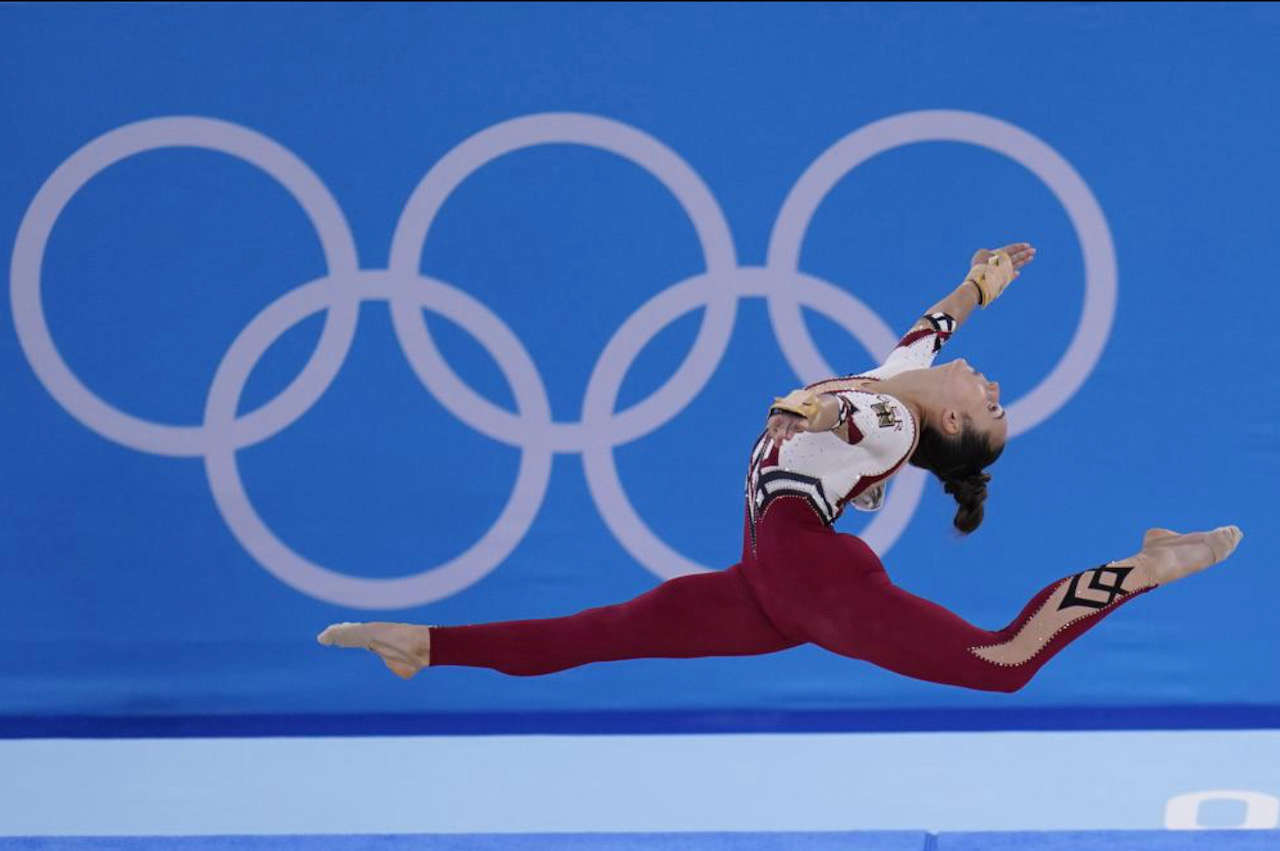