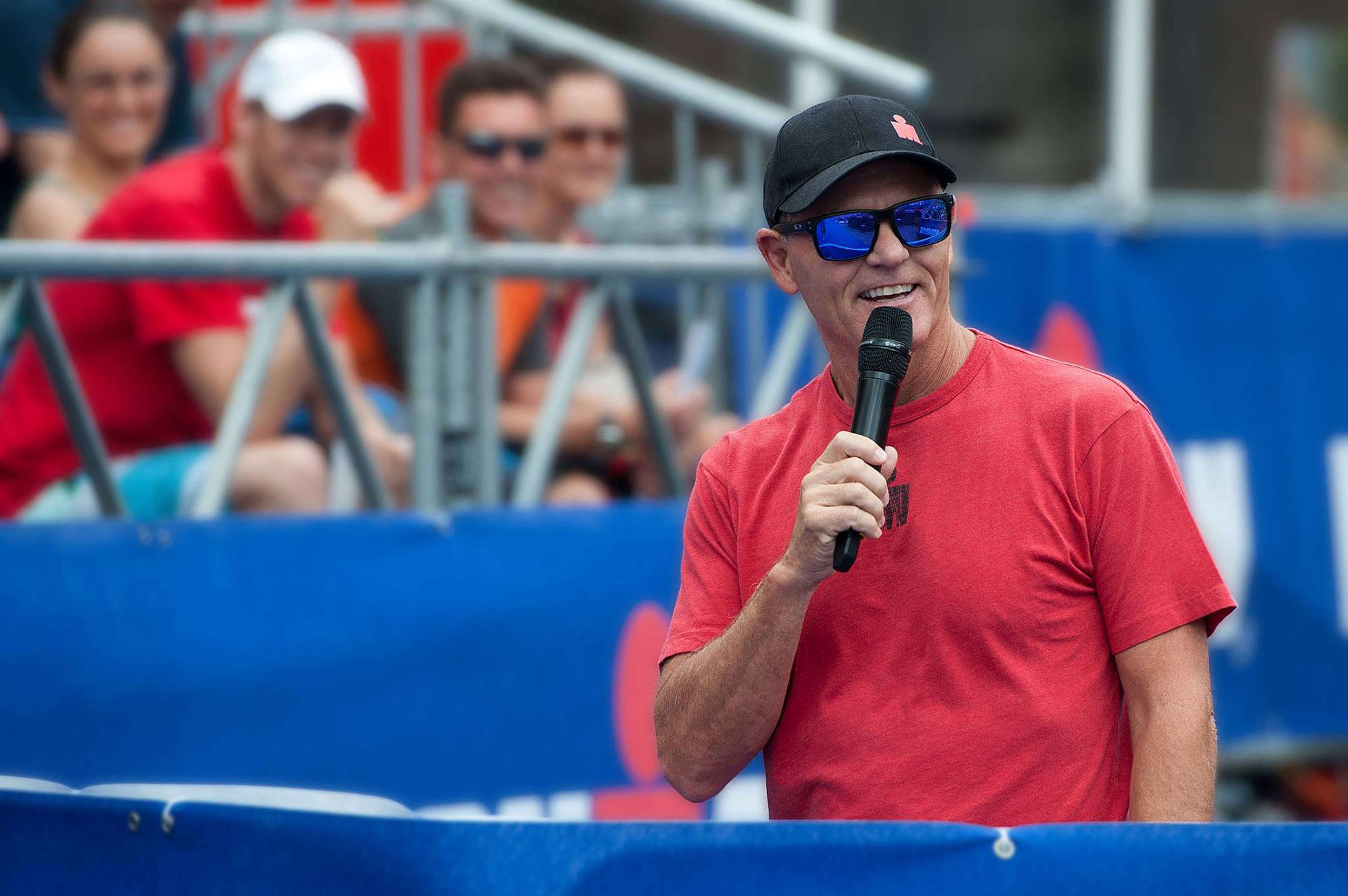 Juneau, Alaska (KINY) - As famous as IRONMAN triathlons have become, even more recognizable is the name Mike Reilly - "the voice" of IRONMAN.

Reilly will be calling the names of each athlete who crosses the Aug. 7 IRONMAN Alaska finish line on the University of Alaska Southeast campus.

His words -- “You Are An IRONMAN” -- have awaited well over 500,000 athletes in over 200 IRONMAN races through his 40 years of calling endurance sports events.

“It’s a pretty easy job because of what I get to do,” Reilly said. “I get to enhance someone’s already great moment of their life. Of the preparation and the journey and the training and the dream of finishing an IRONMAN race and then I get to acclaim to the world that what they are when they do come across that finish line, putting a lot of icing on their cake that they have built up for themselves over the years. I look at it as an honor and a privilege and I can’t wait to do it up north.”

Many athletes push for best times and qualifying times but even more are pushing to overcome barriers most spectators are unaware of.

Reilly makes every IRONMAN finisher feel like they have won more than any gold medal or world record.

“Better than the gold medal they have crossed an IRONMAN finish line,” Reilly said. “Because you know why? It is people from all walks of life. Sure, I call everyone an athlete because they are. I don’t care if they finish in eight hours like the professional will or in 17 hours like maybe the mother of three or the grandmother of four grandkids finished. They are all champions. They are all winners and they are all athletes. So everyone deserves the exact same accreditation at that finish line and I am able to give that to them… It becomes such a parade of emotions and everybody does have a backstory. I don’t always know what those backstories are, that’s why we try to give them as much as we can give them at the finish line. Because people may have gone through absolute hell to get there and we may not know that. But I know everybody has a backstory, some that I do know when they come across and some that none of us know because they just haven’t shared it with people. But they needed that finish line to help heal them…”

Reilly has captured many of the IRONMAN athletes' remarkable stories of healing and perseverance in in his podcast, Find Your Finish Line, and in his book, Mike Reilly: Finding My Voice.

“I felt it selfish of me not to tell some of these amazing stories that I got to witness,” Reilly said. “And I was a part of and saw the transformation of how people transformed themselves or how they coped with the loss of a loved one or how they battled cancer…”

Some of his most memorable podcasts include Mike Ergo, a marine overcoming PTSD. Ergo was stationed in Iraq and involved in the second battle of Fallujah.

“Mike had survivor’s remorse,” Reilly said. “Mike put an M16 rifle in his mouth on New Year’s Eve while he was still over there to end his pain… thank goodness he pulled that rifle out of his mouth. He is now is an unbelievable guy that works at the Veteran’s Administration… he became an IRONMAN athlete, finished multiple IRONMANs and is teaching others with PTSD how to cope…”

Another is Ben O’Donnell, who while training for an IRONMAN in February 2020 contracted COVID-19 while traveling for work. In March that year, he was admitted to the University of Minnesota Fairview Hospital and within 24 hours was on a ventilator and ECMO (extracorporeal membrane oxygenation) to stay alive. After 28 days he was released and began recovery. He completed the IRONMAN North American Championship in Tulsa, Oklahoma, on May 23, 2021, in 16 hours 12 minutes and 41 seconds… 40 minutes faster than his best IRONMAN in 2017.

One athlete who always brings a tear to his eye in remembrance is John Blaze, a former teacher in San Diego who was diagnosed with ALS - Lou Gehrig’s Disease.

People now roll across the finish line at IRONMAN races in his honor and to raise money for ALS.

“We lost John a year after,” Reilly said. “He came back to the race in a wheel chair and then we lost him to ALS a year later.”

Reilly said moments like John Blaze’s roll across the finish line in Kona in 2005 create legacy.

“I get emotional when I talk about a lot of the finishes I have seen,” he said. “Or when people come up to me and remind me of their finish, and it clicks, and I remember… when you are at an IRONMAN finish line, and that is what I would say to your community, you’ll see more passion at that IRONMAN finish line than some people see and feel over a year’s period of time. Because everybody that comes across is doing something extraordinary.”

The very first time Reilly used the “You are an IRONMAN” phrase at the finish line was at Kona in 1991. A buddy in the race was questioning if he could start and complete the event.

“I said, ‘Don't worry, you are going to be an IRONMAN.’ And then I saw him the day before the race checking his bike in and he was kind of the same…” Reilly said. “I was just trying to reassure him he would finish…”

At that finish, as his buddy approached, Reilly started calling out his name.

“Right away our conversation came into my head,” Reilly said. “My, 'I told you so'... and I said, “Dan Trone, you are an IRONMAN,' and I pointed at him. And he pointed back up at me. I could tell he was excited I had said that. I was kind of excited… but then the crowd reacted and you wouldn’t believe the roar… So the next person that came in I did it again… and the crowd went nuts… and then a woman came in… and it is an IRONMAN event so I said she was an IRONMAN and she pointed at me and said, ‘Thank you’ and so that is how it started, to help a buddy out…”

Now Reilly has said that phrase at finish lines in 10 countries.

“There are so many IRONMANs now I can’t get to them all,” he said. “I’ll have people call me up or message me on Facebook (saying), 'You didn’t call me an IRONMAN.’ So then I call them up or send a message telling them…”

He discovered that finishers want to hear the phrase in its original dialect.

“When I first went to Germany I knew how to say it in German,” he said. “I talk to the people there and told them I would say it in German or French and they were, ‘No, No. You have to say, You Are An IRONMAN. Just like you say it in Kona.’ It’s a universal language no matter where I go that’s what I say…”

He also yells it to athletes in airports or over the phone if they didn’t hear it at a race or he missed an event.

“But it’s a sacred saying in their lives and my life,” Reilly said. “So it’s not just to say to anybody. The athlete is the one that deserves it. They are the ones that earned it… that deserve to hear it… I don’t just whip it out to anyone. If I did it would take away from the accomplishments of that age group athlete or professional athlete that come across the finish line who have put in hundreds and thousands of hours to get there…”

Reilly said finish line remembrances will pop into his head from past races at any time.

“I kid with friends about calling out so many names at a race and trying to remember so many things that I come home and forget my wife’s name,” he said.

“All kidding aside it’s an honor to be able to do that,” he said. “They say one of the best things you can do in life is to help enhance someone else’s life. If everybody in the world did that it would be a much better place to live. Well, I get to help enhance someone’s great moment in their life. Some have told me it has been the greatest moment of their life to be able to cross an IRONMAN finish line. Not because they finished but it’s because of who they became. They transformed themselves… on race day when they go 140.6 miles and do the swim, bike, run it is not only about that, it’s about the preparation and the time and the commitment and the sacrifice to get there. That is why it is such a glorious thing to be able to call them an IRONMAN.”

Reilly said the secret to taking care of his voice is, “Don’t scream and yell…”

His book and podcast are available at MikeReilly.net.

“It is not only about finding your finish line at a race or an event but in life,” Reilly said. “We have to find our mini finish line every day. Sometimes you have to get through a difficult and challenging day. We have to find a finish line every month, whether it is in you setting goals or trying to become a percentage point better every day, whatever it may be. I have people on that have amazing stories and I want people to hear their stories firsthand in order to be inspired by them, to be able to say ‘… what am I complaining about?… They are going through the same type thing and they got through to the other side so why don’t I do it too?'"

*KINY sports directors note - KINY radio thanks Mike Reilly for this interview and his encouragement of athletes world-wide:

* To hear the entire podcast of this interview with Mike Reilly go to KINYradio.com click the On Demand tab and click Alaska/Juneau Sports with Klas Stolpe. 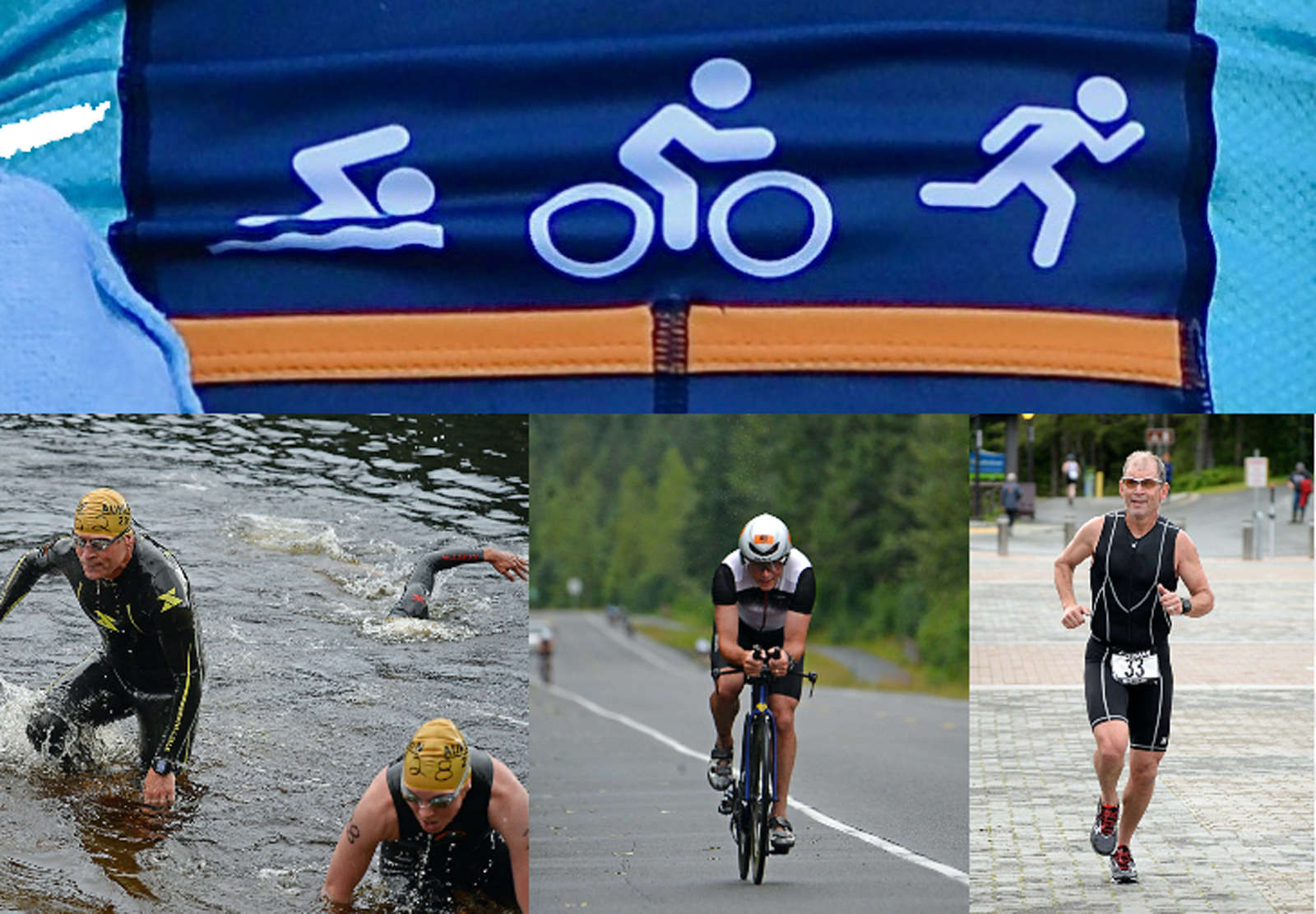 Above - This photo montage show Juneau triathlete, and IRONMAN finisher, John Bursell in the swim, bike and run disciplines triathletes endure. Bursell is shown in the Aukeman Sprint Triathlon which will be run on Sunday and feature some IRONMAN Alaska athletes, including Bursell and his wife Jamie, who trains athletes through her High Cadence Triathlon Training camps and is also an IRONMAN finisher. Over 60 Juneau athletes will race in the IRONMAN Alaska on Aug. 7 and hear Mike Reilly call out their finish.