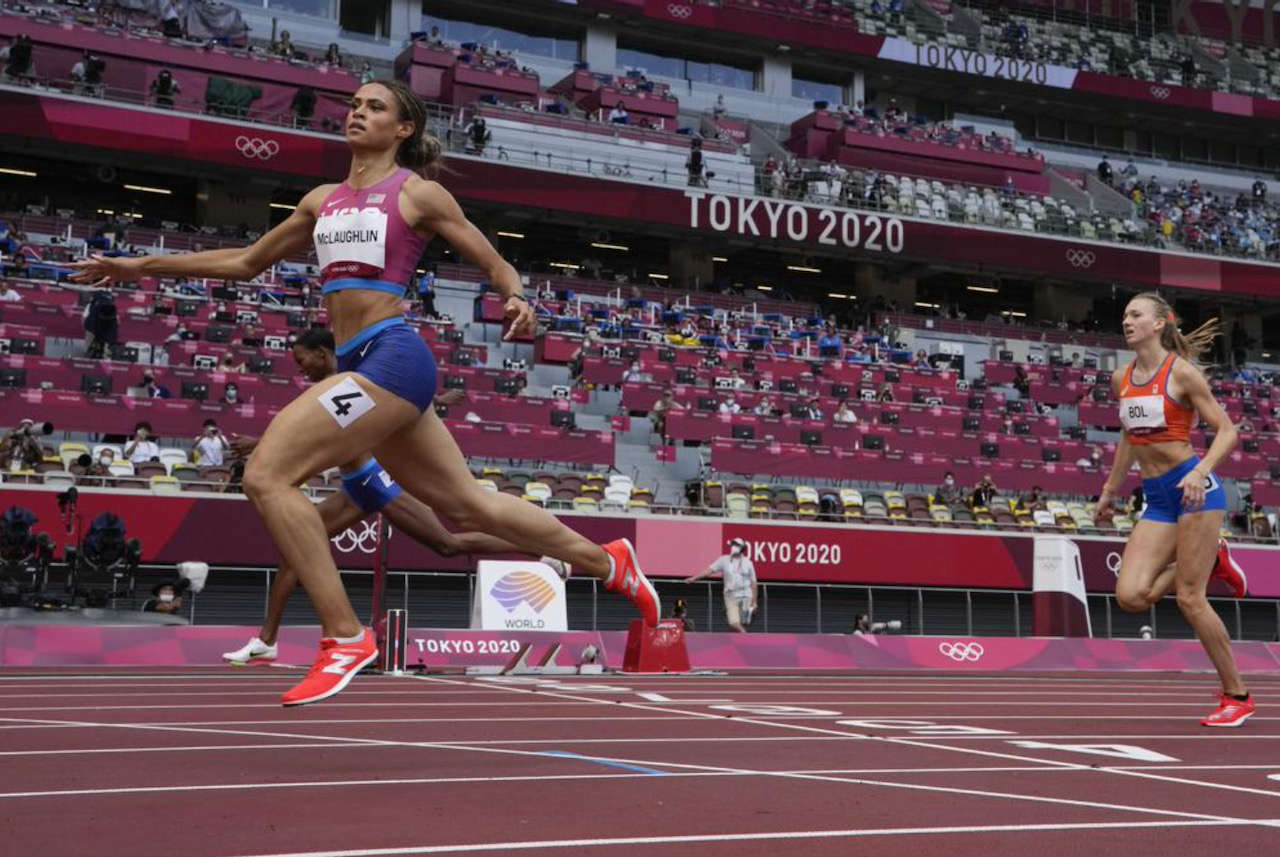 TOKYO (AP) — The Tokyo Games keep producing some of the fastest moments the world has ever seen on the track.

A day after the men’s 400-meter hurdles staged possibly one of the greatest races ever run, the women put on their own show as one of the Games’ most anticipated rivalries lived up to the hype.

The United States’ Sydney McLaughlin smashed the world record and Dalilah Muhammad broke it as well in a sensational American 1-2 finish in the women’s 400 hurdles.

“Iron sharpening iron,” McLaughlin said of her latest showdown with Muhammad. “Every time we step on the track, it’s always something fast.”

This race sat on the razor’s edge for sure. McLaughlin came from behind after the last hurdle to claim the gold in 51.46 seconds, quicker than the 51.90 mark she set at the Olympic trials when she was the first woman to run under 52. Muhammad’s time of 51.58 also would have been a world record.

In this race, however, it was only good enough for second.

Expect these two to set more records between now and Paris in 2024. McLaughlin, 21, and Muhammad, 31, have been trading the record for two years.

Muhammad won the race in the 2016 Olympics in Rio de Janeiro. McLaughlin made the U.S. team but didn’t make the final that year.

“I made the mistake in 2016 of letting the atmosphere get to me,” McLaughlin said. “Just being able to put the pieces together, I am really grateful.”

In other action on the track at Olympic Stadium, Canada’s Andre de Grasse won the 200-meter race five years after finishing second to Usain Bolt. De Grasse won in a national record time of 19.62 seconds, holding off two Americans for the medals.

Kenya’s Emmanuel Korir won gold in the 800 meters to stretch his country’s dominance in the event to four consecutive Olympics.

On the basketball court, the U.S. women advanced to the semifinal round with a 79-55 win over Australia behind a 23-point effort from Breanna Stewart. The Americans are now just one win away from playing in their seventh consecutive gold medal game. They will face Serbia on Friday. The Serbians, who won the bronze medal in 2016, beat China 77-70.

The U.S. has won six consecutive gold medals, and 53 consecutive games in Olympic tournaments since 1992. The Americans put on their best game of the tournament from a roster that didn’t get together until about three weeks before the Games.

Triston Casas hit his third home run of the Olympics, and the U.S stayed in gold medal contention with a 3-1 win over the Dominican Republic. Tyler Austin, a former major leaguer in his home ballpark of the Central League’s Yokohama Bay Stars, added a solo home run in the fifth, his second long ball of the tournament.

The U.S. plays on Thursday night against South Korea, which lost to Japan 5-2, for a berth in this weekend’s gold medal game.

Japanese skaters also took both golds in the men and women’s street events in the first week of the Tokyo Games.

“This competition which was held at my country made us stronger from what we used to be,” Yosozumi said. “I want everyone to love skateboarding.”

The U.S. women’s volleyball team advanced to the semifinals for the sixth time in the past eight Olympics by beating the Dominican Republic in straight sets.

The Americans advanced to a matchup against Serbia in the semifinals. The U.S. is seeking its first gold medal in the sport after winning bronze in 2016 in Rio de Janeiro and silver in 2008 and 2012.

The air temperature during the latter stages of the race was 86 degrees Fahrenheit (30 Celsius), with 74% humidity that made it feel like 95 degrees (35 C). The water temperature was about 84 degrees (29 C), just under the allowable limit of 88 degrees (31 degrees C).

Italy broke its own world record to win the gold medal in men’s team pursuit cycling. The team of Simone Consonni, Filippo Ganna, Francesco Lamon and Jonathan Milan wiped out a deficit of nearly half a second over the final five laps to beat Denmark and finish in 3:42.032.

ARTIST IN THE WATER

Russia’s Svetlana Romashina claimed her record sixth Olympic gold medal in artistic swimming, teaming with Svetlana Kolesnichenko to win the duet. The Russians were heavy favorites in a sport they have dominated for more than two decades. Their last Olympic loss in the sport formerly known as synchronized swimming came at the 1996 Atlanta Games.