Juneau, Alaska (KINY) - The Thunder Mountain High School softball team found its footing in the batters box at Sitka’s Moller Field over the weekend, earning a three game sweep over the host Wolves.

“The biggest thing that we saw this weekend is basically we settled into our defense,” Thunder Mountain coach Julie Herman said. “We had some really strong plays, a couple great double plays, our pitching staff this weekend was outstanding, we were able to really shut their offense down. We were very pleased with our pitching staff and our defense. We are pleased with the weekend.”

On Friday the Falcons had 13 hits to the Wolves five in a 6-3 eight-inning conference win.

Sitka took a 2-0 lead in the bottom of the third inning and Thunder Mountain waited until the sixth inning to cross the plate as senior Mariah Tanuvasa Tuvaifale singled, stole second, advanced on senior Sydney Strong’s single and stole home.

The Falcons took the lead in the top of the seventh as freshman Jenna Dobson singled, stole second and continued on to home. Junior Riley Harp doubled and scored on a double by freshman Ashlyn Gates for a 3-2 lead.

After Sitka tied the game in the bottom half of the seventh, Thunder Mountain scored three runs in the top of the eighth as Dobson singled in freshman Kara Strong, Harp doubled in junior Aspen Kasper and Dobson. Sitka was held scoreless in the bottom half for the win.

The Falcons came back on Saturday with rested bats and put up a 17-4 conference win over the Wolves.

Sitka’s Morgan Feldspausch hit a grand slam homer that also brought in Naia Nelson, Makenna Smith and Tamryn Suarez but the Falcons responded with three runs in the third inning and another five in the fifth for the win. Kreischer hit her own dinger over the fence in the third inning.

“I got up to the plate and I had two strikes on me,” Kreischer said. “There was no one on the bases and there was two outs and she threw me a high ball and I just hit a line drive out into center. It was definitely a ball, a high ball, and I just went for it because I knew I had to protect the plate. I honestly didn’t think I hit the ball that hard but it came off the bat really well. Once I saw it start to go straight in a fast trajectory I figured it was going over.”

“Since my freshman year until know I have increased my mental toughness amazingly,” Kasper said. “I had thought I couldn’t even do it myself but having eight coaches pushing me and just overall I think I have progressed. Before I would get in my head a lot and get really frustrated easily for not pitching first pitch strikes or no strikes. Now I am first pitch strikes and mostly relaxed now. I get surprised when someone gets a hit off me and I shake it off easily. I am so excited we got our first varsity win, just thinking about how much of a team we were from our first game in Ketchikan to now we have become such a more together team. Our team chemistry is awesome now.”

Gates relieved in both games and was praised for being a freshman in varsity action. She allowed just two hits and one run in game one while striking out an astonishing seven batters in four innings and allowed two hits while striking out two in one-and-a-half innings in game two.

“It has been a process to get used to it,” Gates said. “At first, the first game jitters and stuff like that was tough to overcome but now I feel real comfortable playing and I feel like we have a strong team. It is scary at first but when you get into the zone, when there is a batter, I just envision that it is just me and the catcher and I get really confident on the mound and my pitching abilities and it is really fun.”

The Falcons also won a non conference game 14-1 on Saturday.

“It was great to get these wins,” Kreischer said. “I think our team has really been scrubbing around for those wins. We’ve gone through the season and progressed as a team. I think we are finally coming together really well. Our bats are going, our infield has finally found our spots. These three wins have shown us the team that we have become over the past three weeks.”

The Falcons host Sitka on Thursday for their first home games at Dimond Park. Ketchikan is also scheduled to play in Juneau this coming weekend in a round-robin matchup of all four Southeast schools. 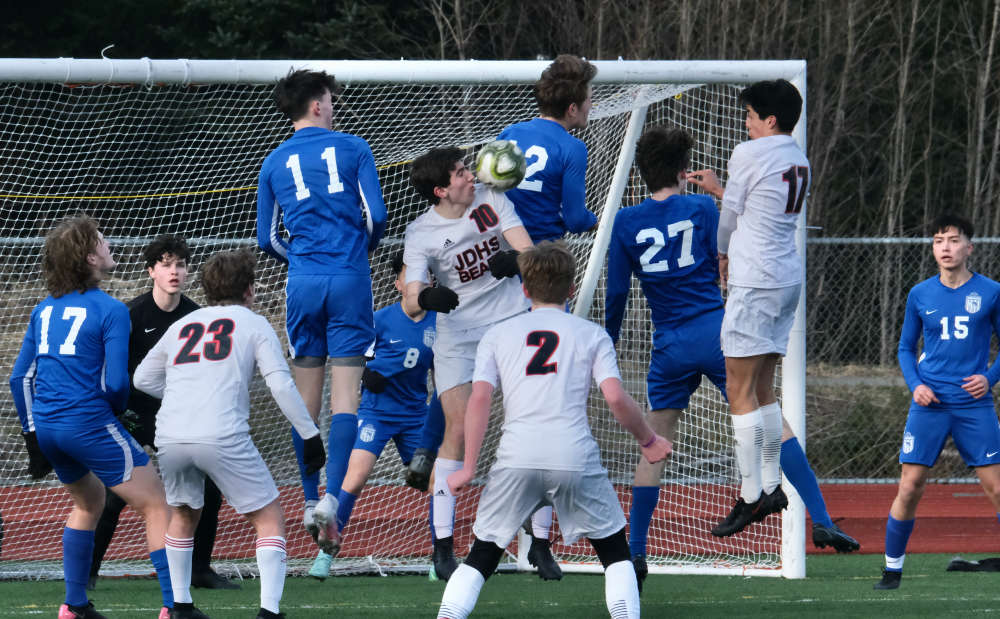