Anchorage, Alaska (KINY) - The capital city's three soccer teams playing at the ASAA state tournament in Anchorage all won their semifinal matches on Friday with clean sheets and will play for state championships on Saturday.

Like an arcade game, the JDHS girls are kicking the ball around the pitch and into the net at an alarming rate - alarming, that is, if you are the opposition.

“I think I just had really good energy today,” Bentz said. “I always try and hustle my hardest. Today I think I really brought it and it worked out for the team. I also had some really great ball played to me. Shout out to Ella (Goldstein) and Blake (Plummer) for that and a couple other players who hit really good long balls that I could run into and it usually turns out on the good side. I’m really excited about this game, knowing that this is my last season I am glad that I have had two out of the three really good games to end my season, same with my team… a lot of the girls that don’t get a lot of playing time have had really good games and it is nice to see.”

Quigley scored the Crimson Bears' first goal off a corner by Sanford 10 minutes into action.

Bentz ran onto a through ball from Plummer six minutes later for 2-0.

Goldstein scored three minutes later, assisted by Plummer, and waited 10 more minutes before scoring with an assist by Bentz for 4-0. The two exchanged roles and Bentz scored from Goldstein for 5-0 just minutes into the second half.

Two minutes later Plummer put a pass to Bentz who headed in a 6-0 lead. Another two minutes saw Bentz run onto a Plummer through ball and make the scoreboard spin to 7-0. Bentz added a final rebound score off a Plummer shot for 8-0.

“It is nice to be playing your best soccer at the end of the tournament,” JDHS coach Matt Dusenberry said. “They are focused. They just want to give themselves a chance. We don’t talk much about repeats or back-to-back and all of that stuff but they have talked about giving themselves an opportunity. And they are in the championship so they have given themselves an opportunity tomorrow to play for it so it will be fun to watch.”

Goldstein received the ASAA player of the game honor.

The JDHS girls will play Grace Christian for the state championship at 1:30 p.m. Saturday at Service High School. Grace defeated Homer 1-0 in a semifinal. 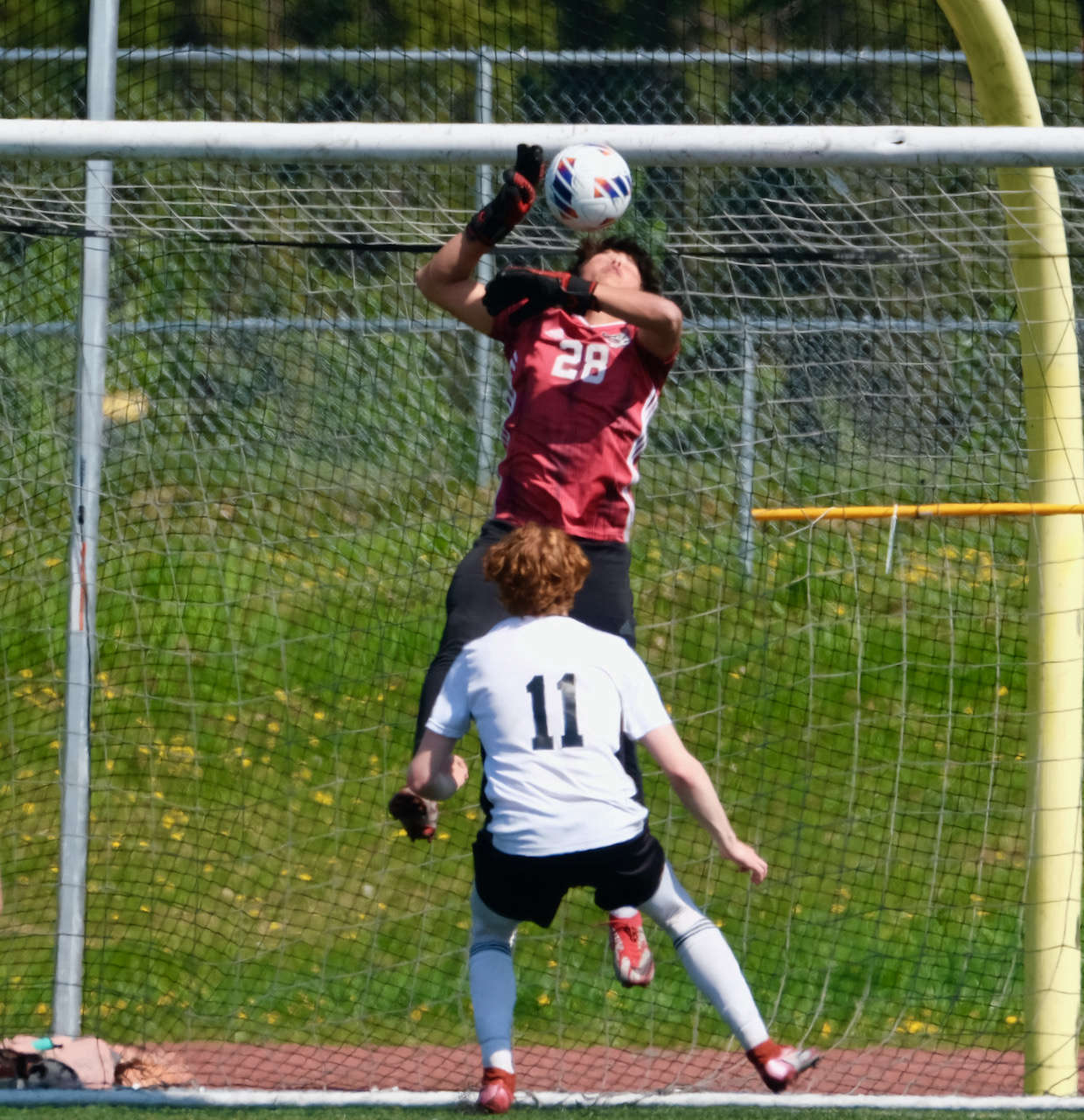 The JDHS boys were chasing Kenai in the opening minutes of their semifinal until Crimson Bears freshman Kai Ciambor, looking rested after not playing in the opening state match, put the first goal in with an assist by senior Andre Peirovi.

“I didn’t think we played particularly well in the beginning,” JDHS coach Gary Lehnhart said. “I think that first goal really changed the game. So when Kai knocked it in it really got us to kind of relax a little bit and play a little better.”

Ciambor had a spin move that excited the crowd and senior Tias Carney put his spin on it as well as the Crimson Bears began to look more relaxed.

With 6:20 remaining in the first half Ciambor received a ball from Carney and put a hard kick past a defender and the keeper for 2-0.

Carney mixed it up in the box roughly a minute later and the Crimson Bears benefited for a 3-0 advantage.

“I think where the game really changed was when Tias sort of single-handedly turned kind of an innocuous situation in the box into a goal right before the half,” Lehnhart said. “It is typical of him. He is just relentless. He finds a way. He is long and lanky, he finds a way to get his foot on the ball and keep it alive and the next thing you know it is in the net and it is 3-0. 3-0 at the half is a totally different situation than 2-0. With 2-0, one goal and you feel like you have a chance. Down 3-0 you have to do that twice.”

Kenai had been giving JDHS trouble on the wing but an adjustment put Crimson Bears senior Owen Costello on Kardinals junior Wade James and, along with JDHS junior Will Robinson, they shut him down.

“We made a tactical move there, moving Owen over, and after that he and Will just really made that attack not as effective,” Lehnhart said. “We left that the rest of the game and those two did a nice job. Owen had a great game.”

The work by Costello was one of his best career defensive matches and he was rewarded with the Crimson Bears Lunch Pail honor as player of the match.

“Ironically, in the second half we kind of took the air out of the game,” Lehnhart said. “We did a good job of possessing it. We didn’t really have any great chances. We were missing chances to put the game away and then Owen got the game ender.”

Costello hit with roughly 10 minutes left in the match with an assist by junior Gabe Cheng for a 4-0 score. Ciambor received the ASAA player of the game honor. 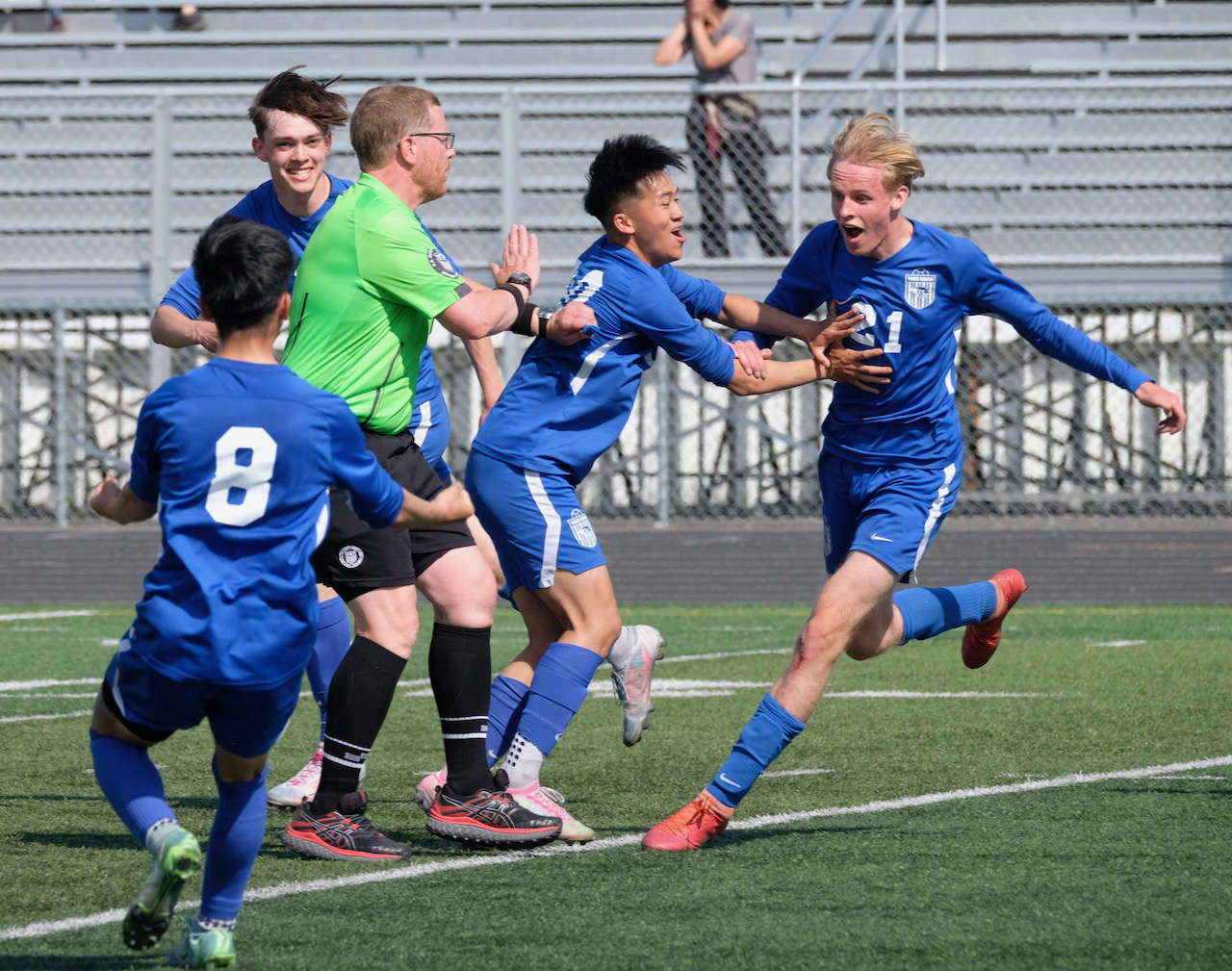 Thunder Mountain ran into a game Grace Christian Grizzlies side that matched their physicality and both clubs were scoreless in the first half.

“Our defense really stepped up this game and they really needed to,” senior keeper Miles Peterson said. “Grace is a hard team. They played really well, it was a hard fought game. They really tested me a couple of times and I just had to play well.”

The Falcons broke the ice with 25 minutes remaining in the second half.

Junior Preston Lam hit a corner kick into the box and senior John Magalhaes headed it down and past the Grace keeper for a 1-0 lead.

“We just stuck with it and played as a team,” Wallace Adams said. “I think this is one of our best games yet this year where we stuck through it and we actually came out better in the second half than the first half. We are known to kind of fall off in the second half, due to whatever reason, but I really feel like today we realized what we had to do and we turned it around in the second half and started clicking like a team.”

Falcons senior Talon Briggs ran under a through ball and took it midfield where a Kenai defender marked him away, but Briggs shifted and put a shot on goal that was blocked, he recovered and put it past the keeper for 2-0.

“We didn’t make any changes,” TMHS coach Tim Lewis said. “The guys just came out to play. They have been wanting this. They kind of just made it happen so hats off to them. They know I want a clean sheet so hopefully that affects them. It was good to keep them scoreless and it is always great to get some goals, too. I just have one more game to coach and that will be some of these kids’ last games and we’ll get to send them off. I’m looking forward to it and looking forward to resting after this.”

A tough defensive backfield for the Falcons stifled the Grizzlies in the final 10 minutes as TMHS keeper Miles Peterson and senior center-back Darin Tingey shut down the box.

“Darin made a huge save for us at the end,” Lewis said. “He doesn’t get a lot of the credit a lot of the time because if they score, they are either going to blame the goal keeper or him being the last back. He covered for Miles (Peterson) and made a great save. Again, nothing more that you could ask from a center-back. And once you have one guy doing it, it kind of goes on to everybody else. It was very infectious at the end.”

Tingey said he expected the attacks.

“I just really focused on being aware of where everyone was at,” Tingey said. “I knew once we scored they were going to try and play it over us. So I just tried to watch for the runs and the long ball and just try and be prepared for that. I think we definitely stepped it up. After John (Magalhaes) put the first one in that kind of boosted my spirit, then everyone was playing their best.”

One of the biggest goals came in stoppage time from one of their smallest players as junior Caden Cunningham came off the bench and found the back of the net. Magalhaes put the assist to Cunningham on a through ball, rewarding the junior varsity player for his season of support.

Briggs received the ASAA player of the game honor.

Now the Juneau cross-town rivalry has shifted north and the Falcons will face the Crimson Bears in the state championship game at 11:30 a.m. on Saturday on the Service High School pitch.

“I’m very excited,” Wallace Adams said. “It is great to have a rivalry that goes all the way back to your home town. It is cool to see two Juneau teams in the championship no matter who comes out on top.” 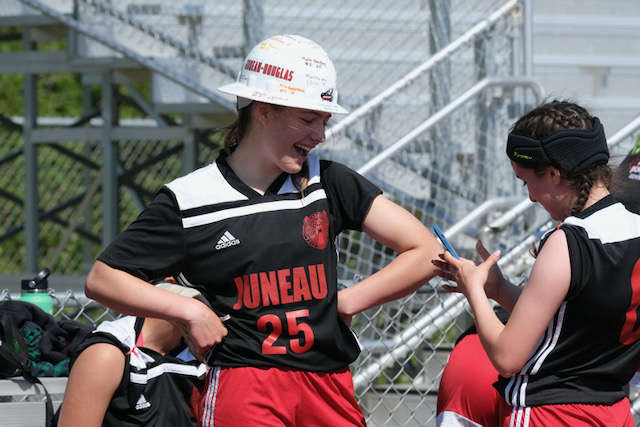 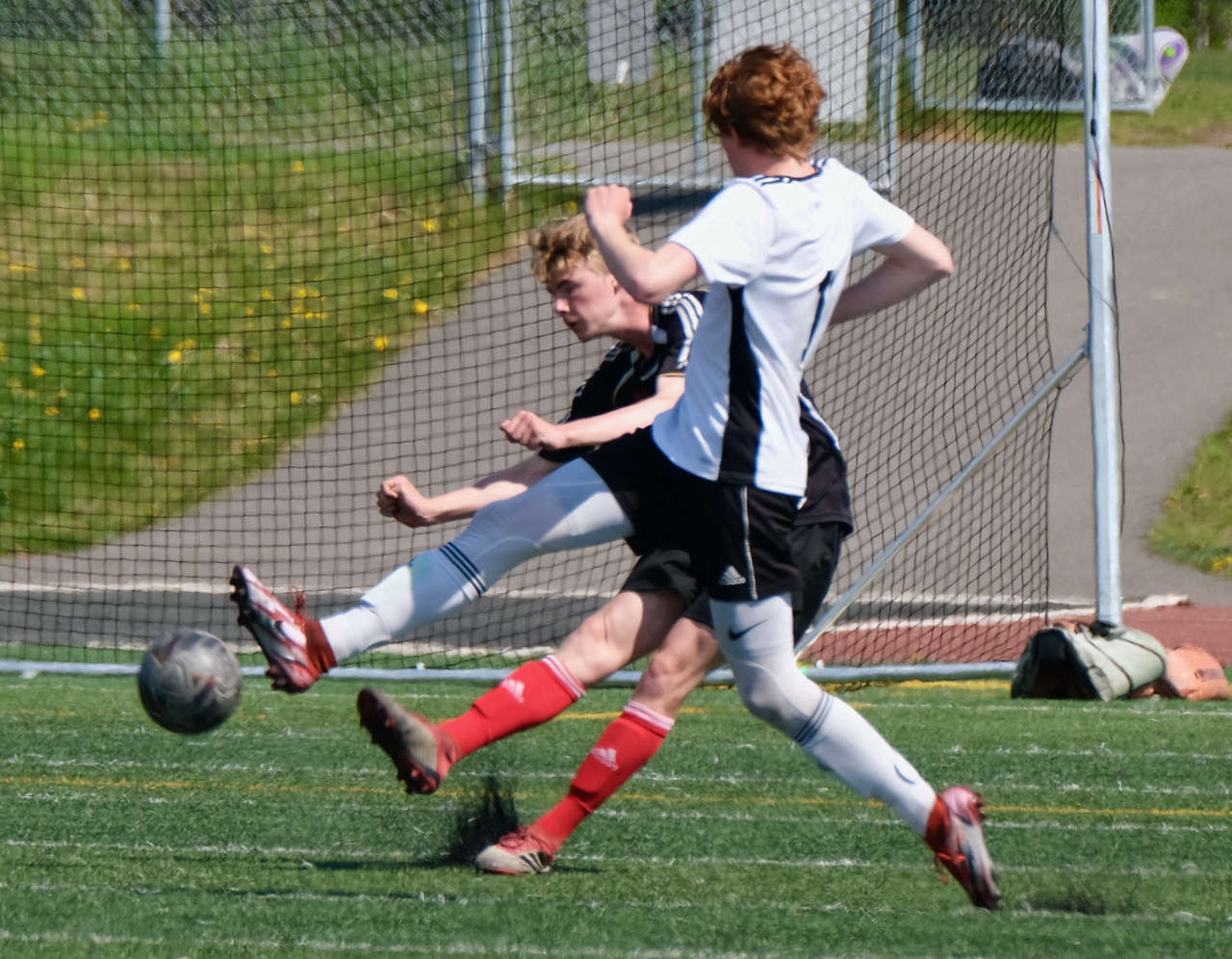 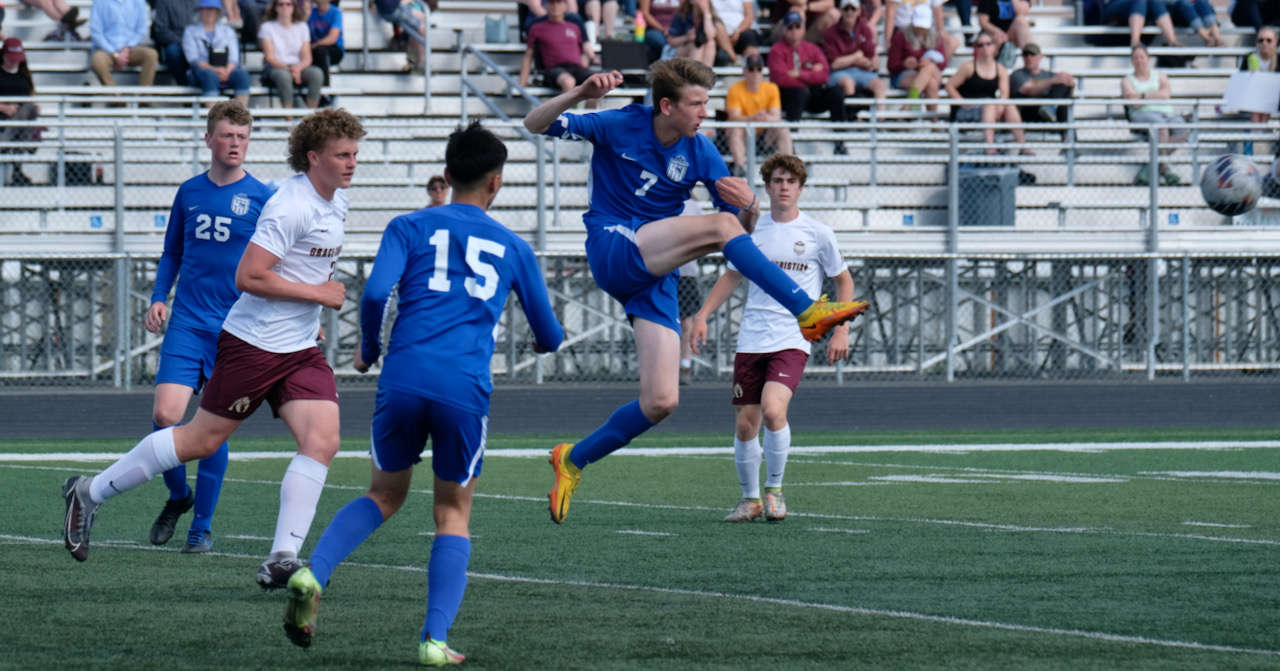 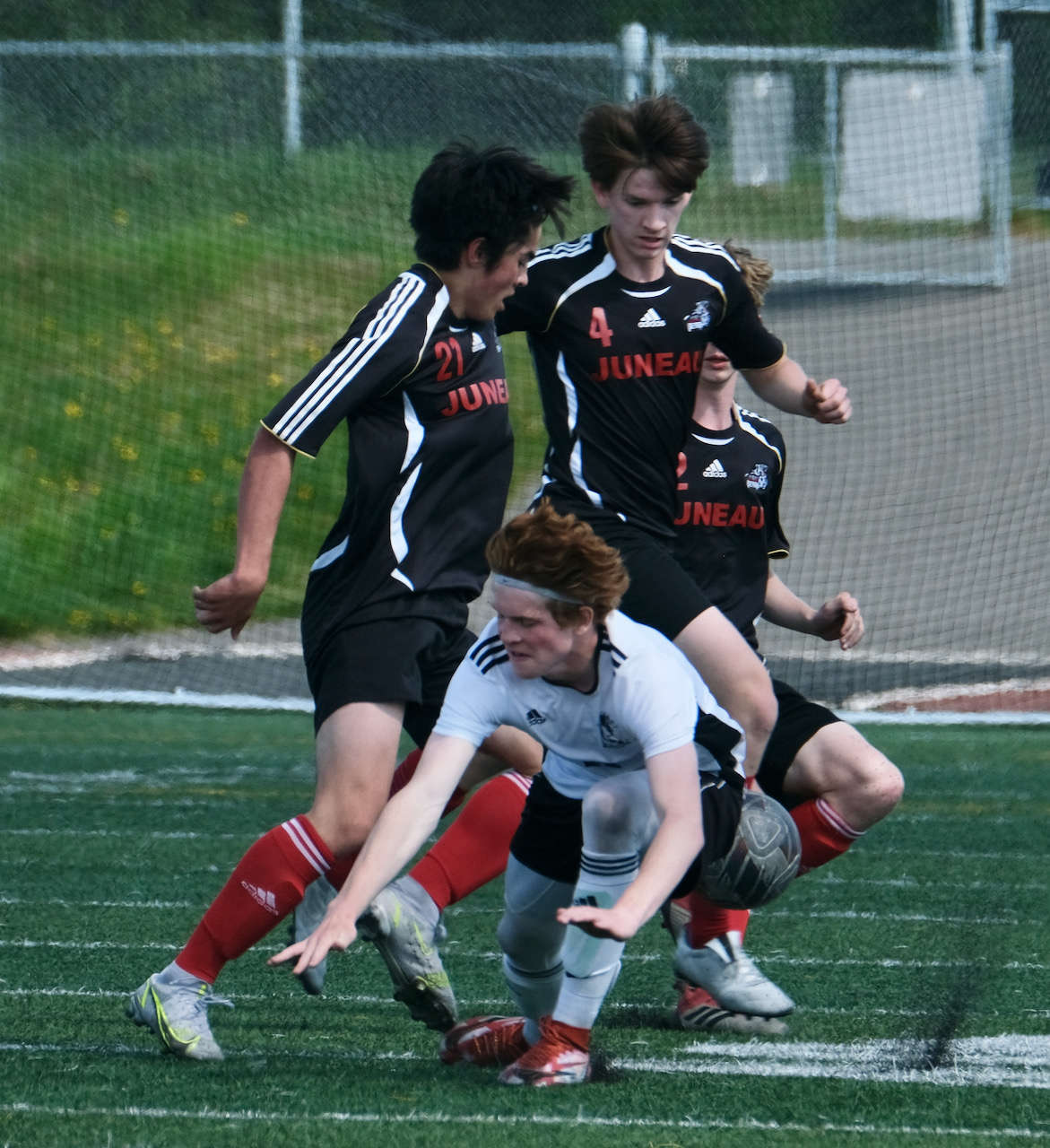 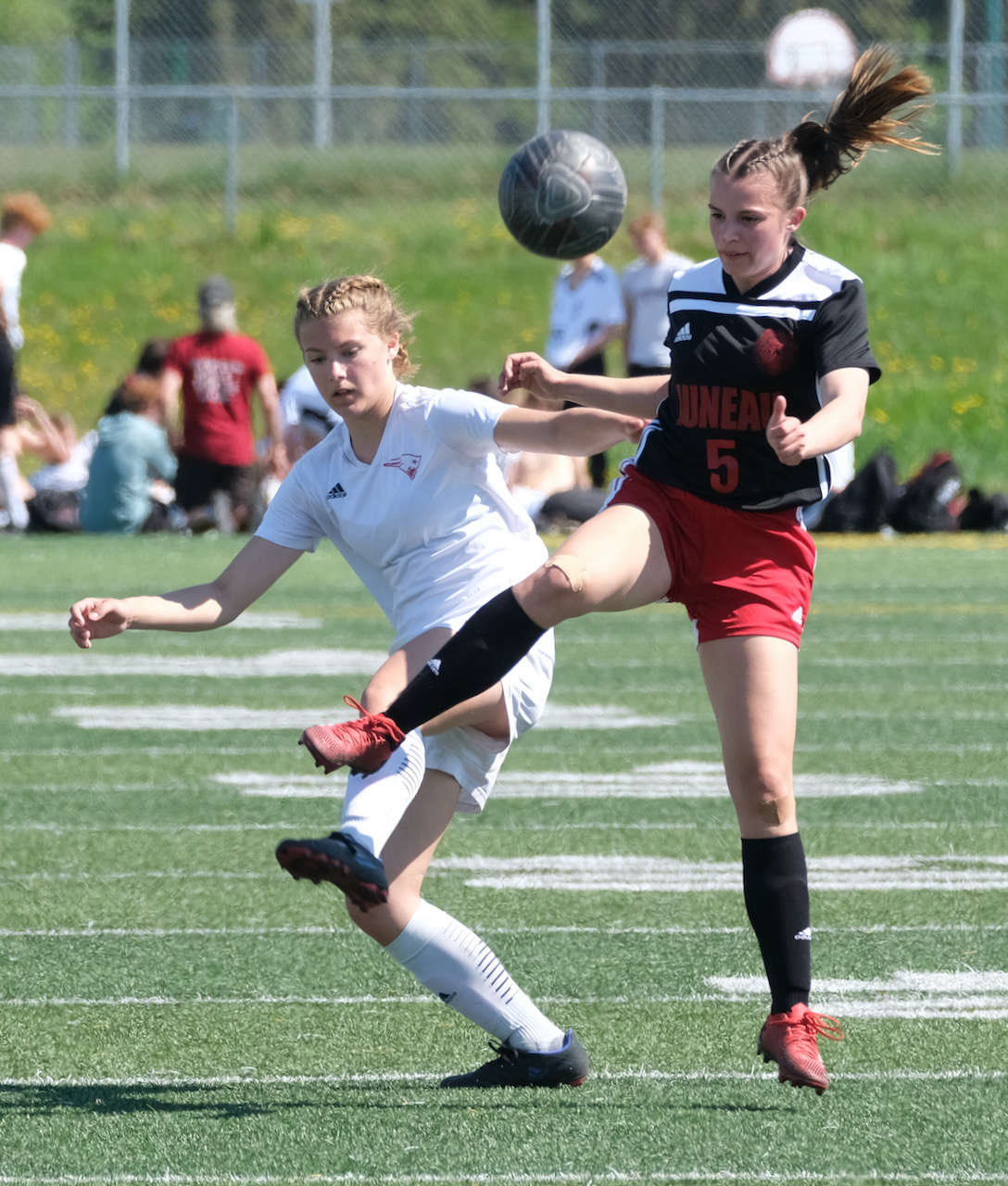 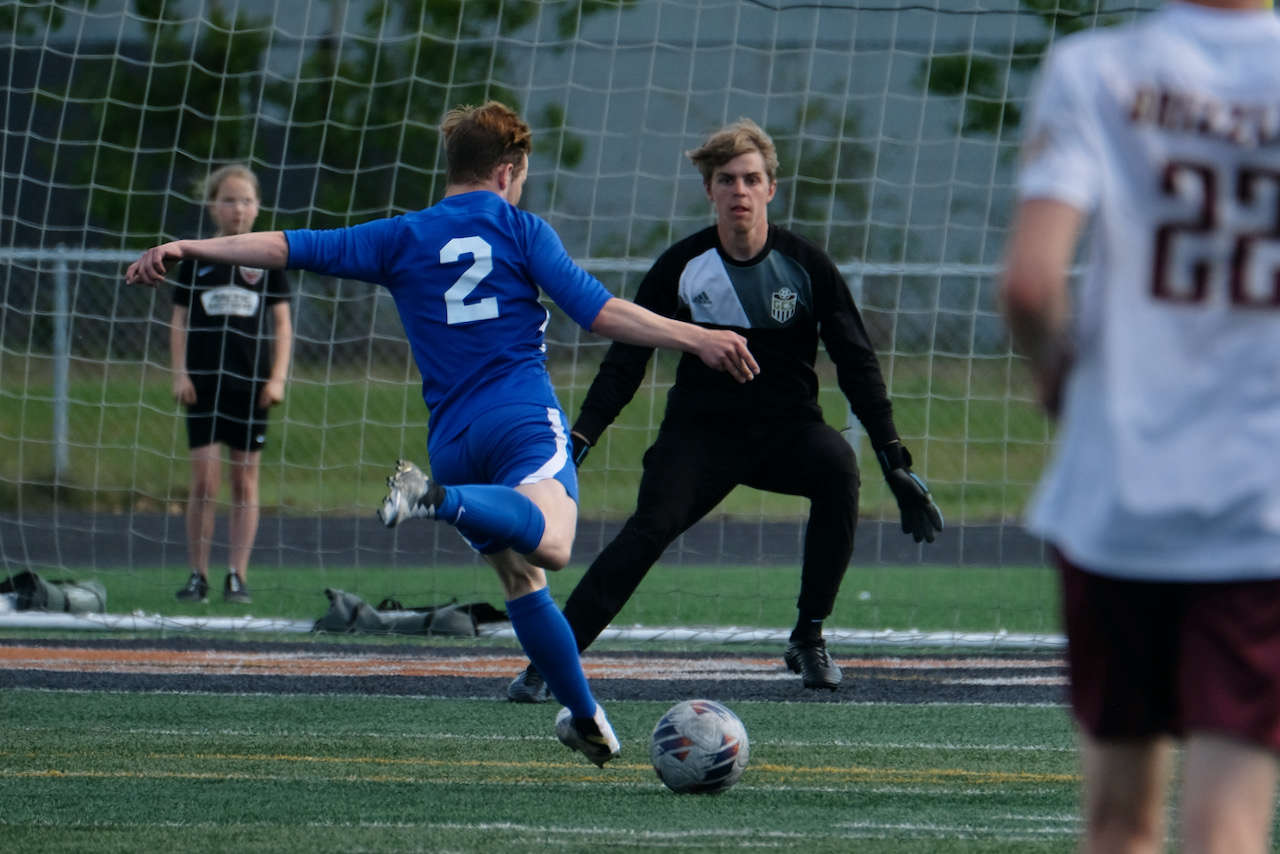 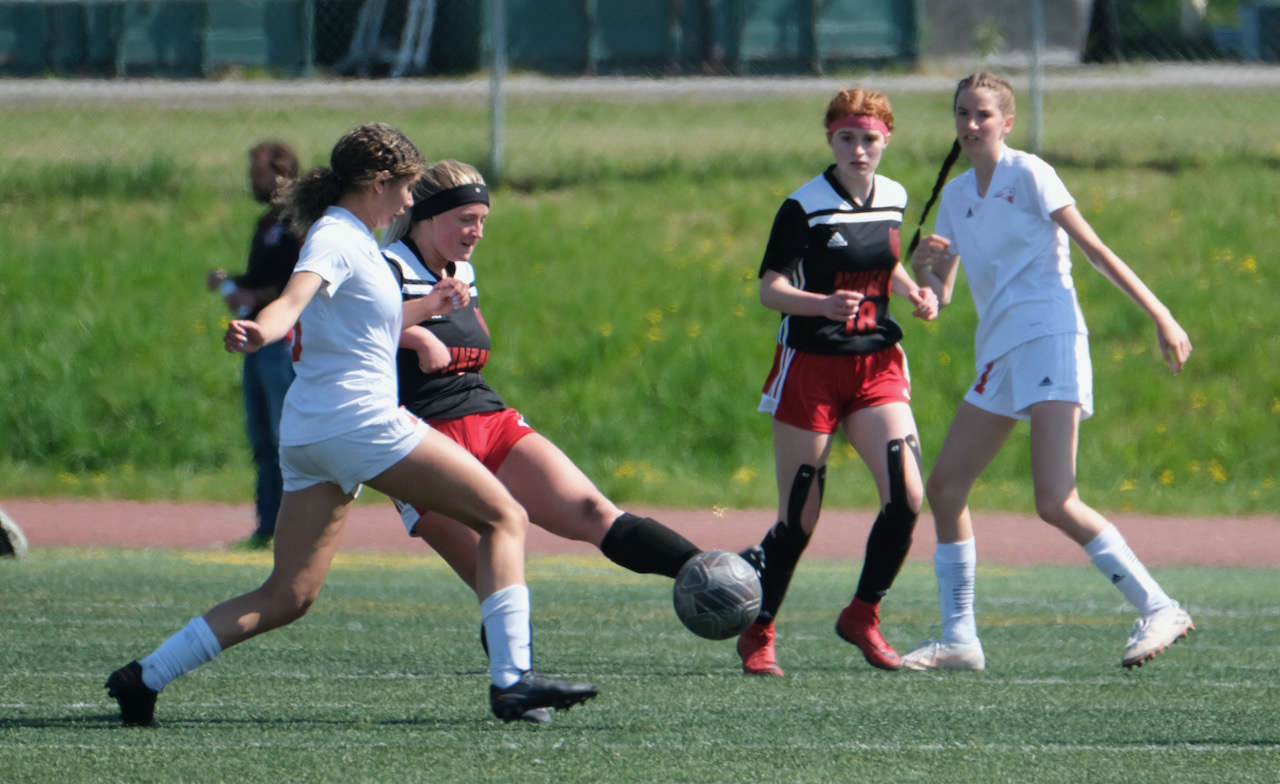 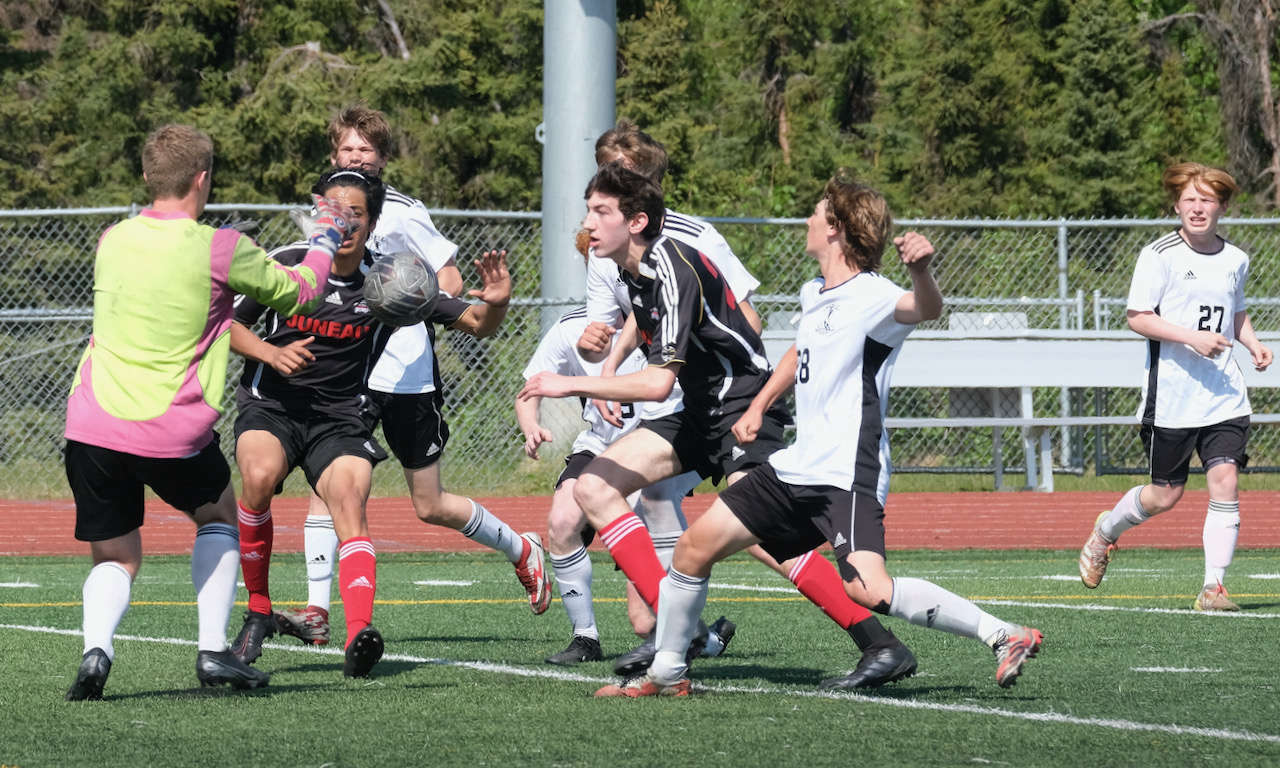 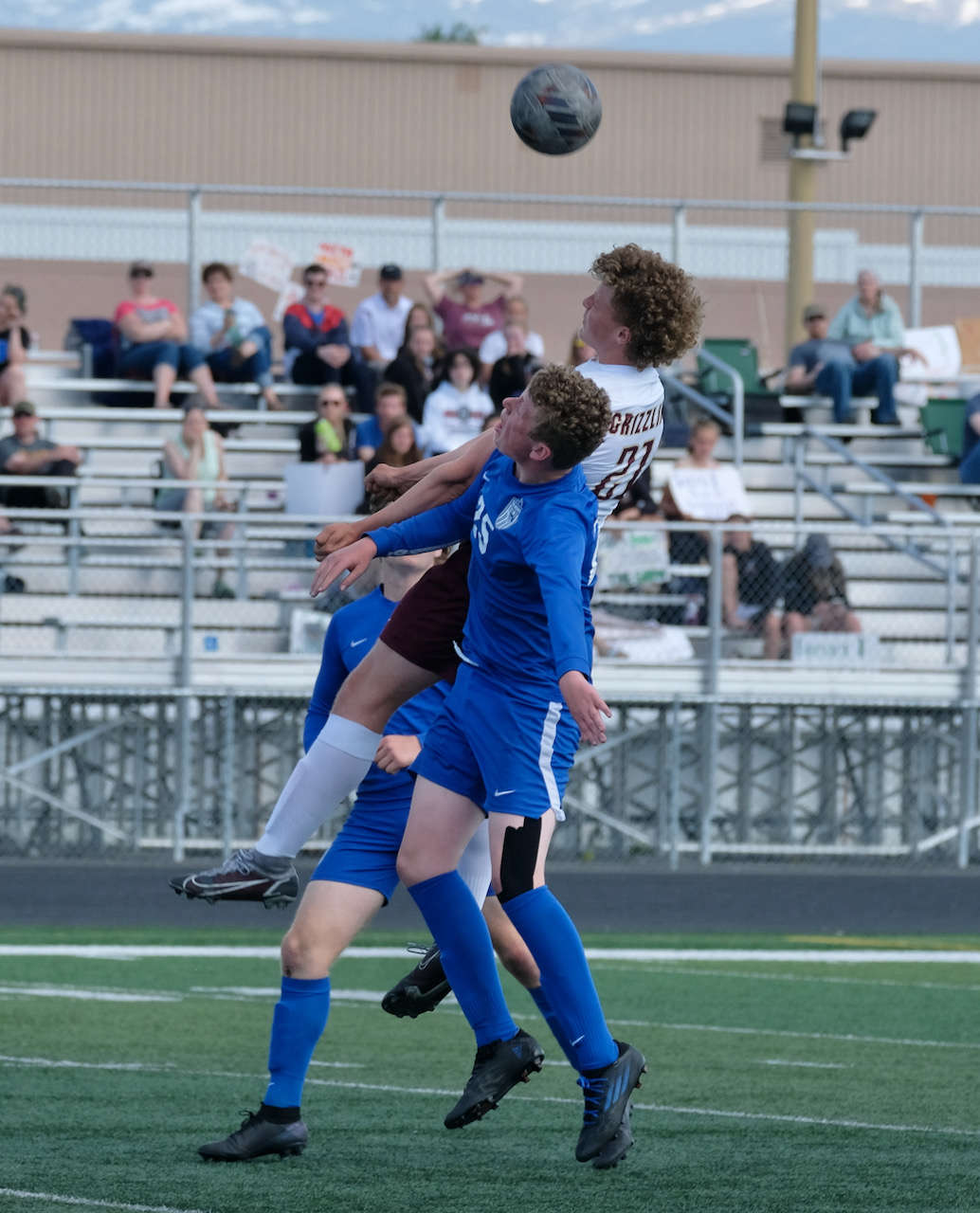