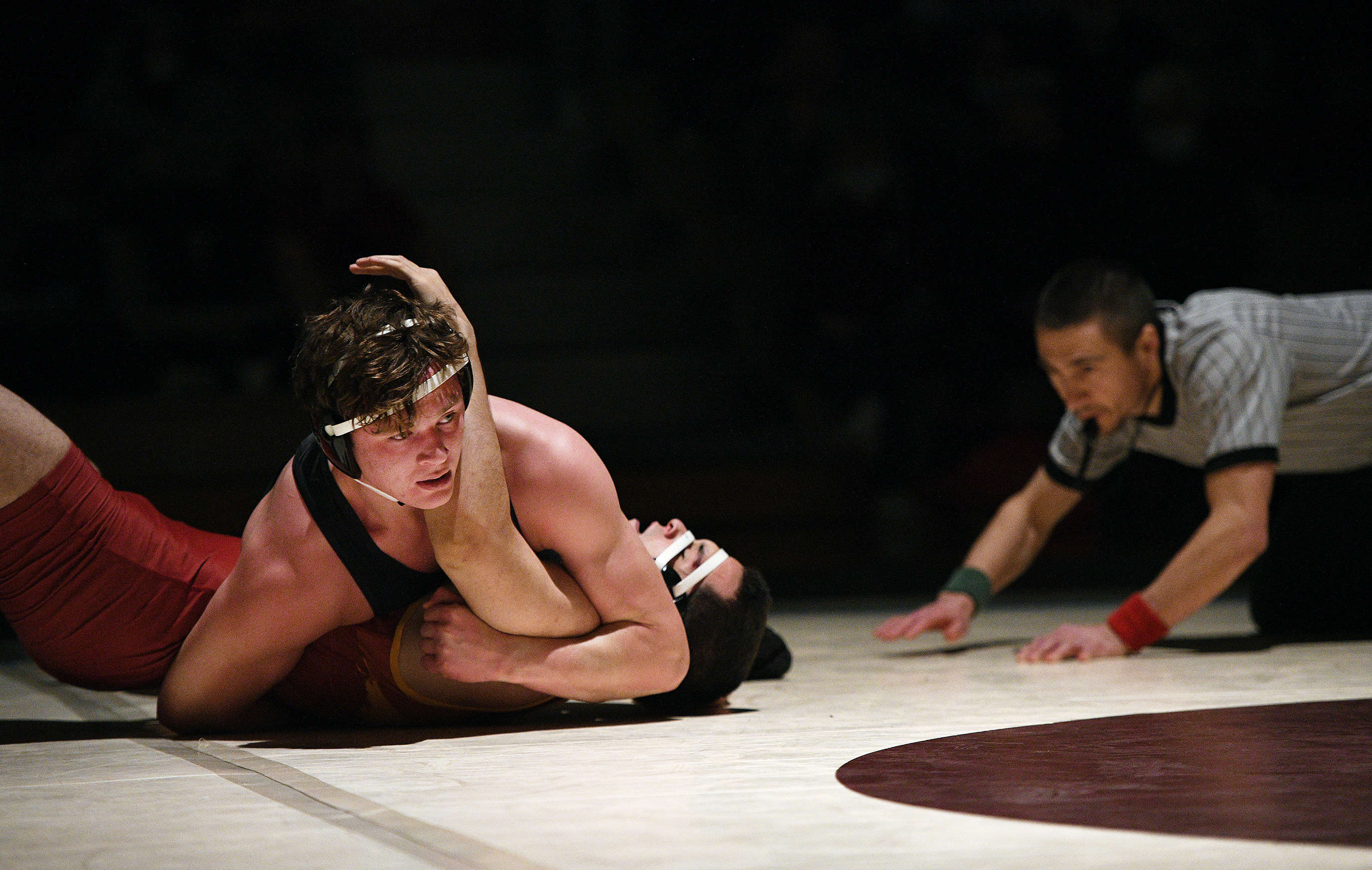 Juneau, Alaska (KINY) - Thunder Mountain High School Falcons wrestler Sage Richards is on a mission. The junior carved out three hours of workout time on Sunday, a day after winning the 189-pound weight bracket at the Bill Weiss Invitational in Ketchikan on Saturday and just hours after arriving at the airport via the infamous Alaska Airlines “Milk Run.”

“It feels really good to see all the work I have been doing in practice pay off and in the weight room,” Richards said. “After losing state it feels good to win something.”

Richards was an integral part of the Juneau Huskies football team reaching the state championship game in October, a loss that could have easily gone in the other direction.

In his first week back on the competition mat, the grappler dominated his bracket and looked to be well ahead of his fifth-place showing at last season's state championships.

“Last year I wasn’t in as good of shape as I am this year,” Richards said. “Last year I think my shots weren’t as good and my technique at neutral, or top, wasn’t as good. I’m really just committed to winning state. That’s the goal this year. Not fifth place or anything like that. Just putting all the work in and do my best. Obviously I have a lot of respect for my other competitors up north, but I’m really confident that I can do well and compete up there.”

That mindset is helping the Falcons coaching staff lead a freshmen-laden grappling team through a sport that traditionally is dominated by upperclassmen.

Richards was undefeated Friday and Saturday in winning his weight bracket with the title bout on Saturday a pin against Mt. Edgeumbe’s Karl Osborn 30 seconds into the second quarter.

“I had a poor shot and he took me down,” Richards said. “I worked back on top and just fought to pin him. Worked my technique, the fundamentals that I have been working on in practice recently.”

The Falcons totaled 43 wins and 33 losses on the weekend. The matches were distributed in a wide variety of weight bracket changes and cross bracketing. The Falcons had seven freshmen among their 11 grapplers, in comparison to Ketchikan with 11 seniors alone on the Kings roster.

“It was an uphill battle for sure,” Falcons head coach Adam Messmer said. “But I’m really happy with how our freshmen performed. They are at practice every day and they are working hard. It is definitely an uphill battle when you are a freshman going against a stacked senior weight division but they keep coming back. Every tournament we go back and fix our mistakes and every tournament I am seeing improvement in them. They are not taking their losses as a negative thing. They are building on them. That is kind of what makes champions.”

For the Falcons, Richards put up four pins during his Saturday title path.

Classmate Carson Cummins was perfect in the combined 112/119-pound bracket and had three pins on his way to the title on Saturday.

“He wrestled up a weight class on Saturday to get some more competition,” Messmer said. “He had some stiff competition and wrestled some of the smartest matches I’ve ever seen him wrestle.”

“He’s wrestled pretty much since birth,” Messmer said. “He loves the sport to the point that he knows about every single wrestler in the state and can tell you the statistics of every single wrestler in the state. He is pretty much an all around good wrestler. He takes direction well. An accomplished wrestler for his age. If you talk about changing things up he does it instantly.”

Freshman Milo Sidlo was second on Friday and seventh on Saturday at 103/112-pounds.

“Sage wrestled an amazing tournament,” Messmer said. “He was one of our football guys that came in late so he still has a bit of conditioning to do. I think that was the difference in the title match.”

Freshman Jacob Katasse placed second in the B bracket 130-pounds on Friday and eighth on Saturday.

“He ran into some stud seniors,” Messmer said. “It was definitely an uphill battle.”

Freshman Denali Schijvens placed second in the B bracket 160-pounds on Friday.

“He’s a first-year wrestler,” Messmer said. “He did have some big wins. Every match he goes back to the drawing board and fixes some mistakes. Every tournament he is looking more and more like a wrestler.”

Messmer said wrestlers like Sage Richards are vital to a successful program.

“He showed a pretty dominant performance,” Messmer said. “I have been coaching Sage a long time. A couple years ago the switch really turned for him and he kind of peaked last year at state, which was fun to watch. He’s all in. This year he has taken on a little bit of a leader role for these freshman, which is nice to see him blossoming into a young man and taking responsibility for the kids underneath him. I had Sage talk to our freshman about how many matches he won when he was a freshman, and now he is taking first and a returning state placer. You have to put your time in.”

In that talk, Richards described that initial transition from club competition to the high school level where weight divisions are dominated by juniors and seniors.

“I told them I was beat bad when I was a freshman,” Richards said. “I was not very good compared to my competition. So many of the freshmen who are struggling to win matches and stuff, I told them to stick with it: ‘You will succeed if you put in the work and you keep coming to practice, showing up and working out, conditioning and practicing your technique. Doing all the stuff you are supposed to do. Going to all the tournaments you can. You will win matches, even if you don’t win them this year.’ I see a lot of heart in all these freshmen. They keep coming to practice and commit themselves to help make a wrestling culture here in Juneau.”

Last year, as a sophomore, Richards lost one match in Southeast, and placed just one position off the podium at state.

“I had a tough time beating some of the seniors up there,” he said.

The Falcons upperclassmen are leading by example in the practice room.

“Myself and some of the upperclassmen steer them in the right direction,” Richards said. “Tell them it is not okay to be goofing around all day at practice, that’s for off the mat. On the mat, during practice, it is serious. You take every second you are on the mat practicing seriously and use that time wisely.”

The Falcons head to the mats at the Lancer Smith Invitational in Wasilla’s Menard Center this weekend. Over 40 teams compete in what is considered one of the state’s premier tournaments and a preview of the top grapplers throughout Alaska. Thunder Mountain will take 20 wrestlers.

“Hopefully my work pays off,” Richards said. “And I can see what I can do against some really skilled wrestlers. There are some guys that I have been wrestling since I was a little kid. I just can’t wait to wrestle them, see how good they are. I have been wrestling since I was five, so for around 11 years. It’s a really good feeling knowing, obviously I’m doing really well in these tournaments, it feels good seeing all the time, all the hours paying off. Just like all the coaches I have grown to love. It’s just an awesome feeling having wrestling, being in this culture for so long.” 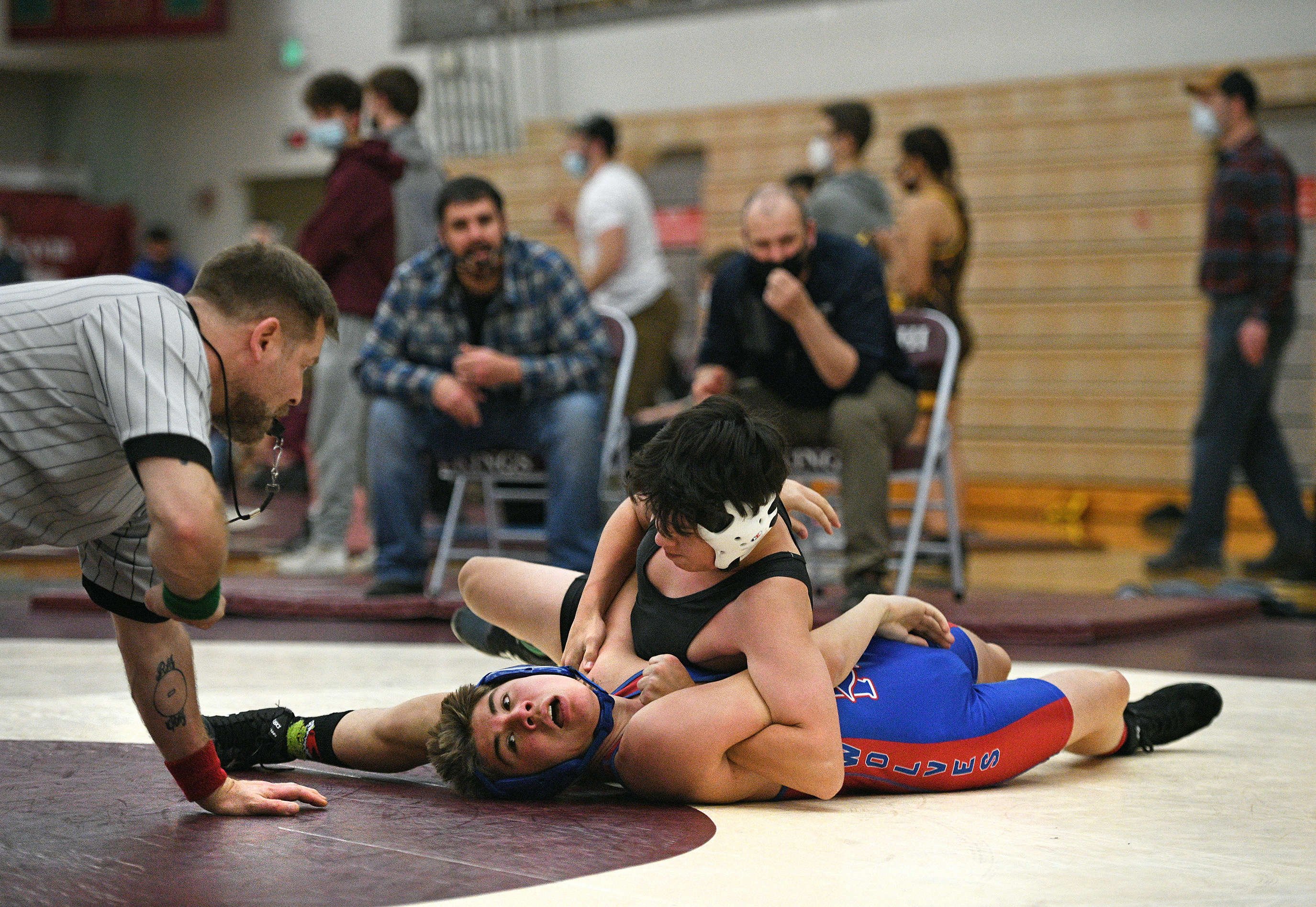