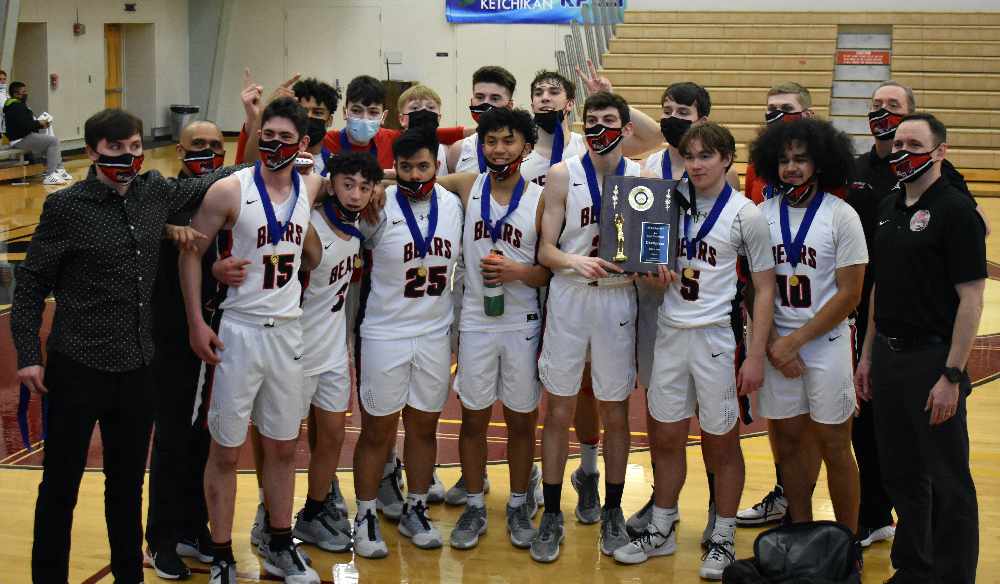 Juneau, Alaska (KINY) - The Juneau-Douglas Yadaa.at Kalé Crimson Bears boys basketball team was unstoppable in the Region V 4A basketball tournament, but their state title hopes have been thwarted by COVID-19 concerns.

After a 87-66 win Saturday night over host Ketchikan Kings for the region title, the Crimson Bears were officially notified Sunday that they will not travel to the Matanuska-Susitna Borough for the ASAA March Madness Alaska State Basketball Tournament. The Thunder Mountain Lady Falcons, as a possible at-large qualifier, won’t either.

District Superintendent Bridge Weiss, in an email to principals and athletic directors Sunday, congratulated the boys team for their win and said she regretted to make the decision that Juneau teams, “whether qualifying through the tournament championship or an ‘at large’ berth, will not be approved to travel to MatSu to play in the state tournament.”

She said the Alaska School Activities Association had been notified.

She said her position has been consistent throughout the school year - that “we cannot approve travel into red alert areas of the state. It is very unfortunate, but we can’t put our school community or the Juneau community at large at risk.”

“Please know I do appreciate how difficult this is, as so many experiences during the pandemic have been,” she wrote.

She confirmed her decision in an interview with KINY. She said these are decisions each school district must make, and they aren’t easy decisions. Weiss said she feels a “huge sense of responsibility” not only to the school community, which is resuming in-school learning, but also to the broader community in Juneau.

“For me to send kids and families up into the high-alert area and then potentially come back and begin a bit of a spike here would be just unconscionable,” she said.

She also said she made clear several weeks before this that travel would not be approved if the region hosting the tournament was in a red, or high-alert, status, as designated by the state health department. High alert, according to the department, means there is widespread community spread.

The health department, in a release Saturday, showed the Matanuska-Susitna Region among the areas of the state considered at high-alert status; Anchorage was in that category, too. Juneau was listed in the low-alert category.

“This isn’t like cancelling practice because of snow,” Lee said.

“I am beyond words,” Casperson said. “So heartbroken for the team. I haven’t had a chance to tell them yet.”

Weiss said she had gotten some pushback to her decision and expected to get more this week. She said she supports school activities and was trying to do what she believed was the most prudent thing to do during the ongoing pandemic.

Ketchikan girls coach Kelly Smith, the 4A champion, and boys coach Eric Stockhausen, the 4A runner-up, confirmed early Sunday they were traveling to state.