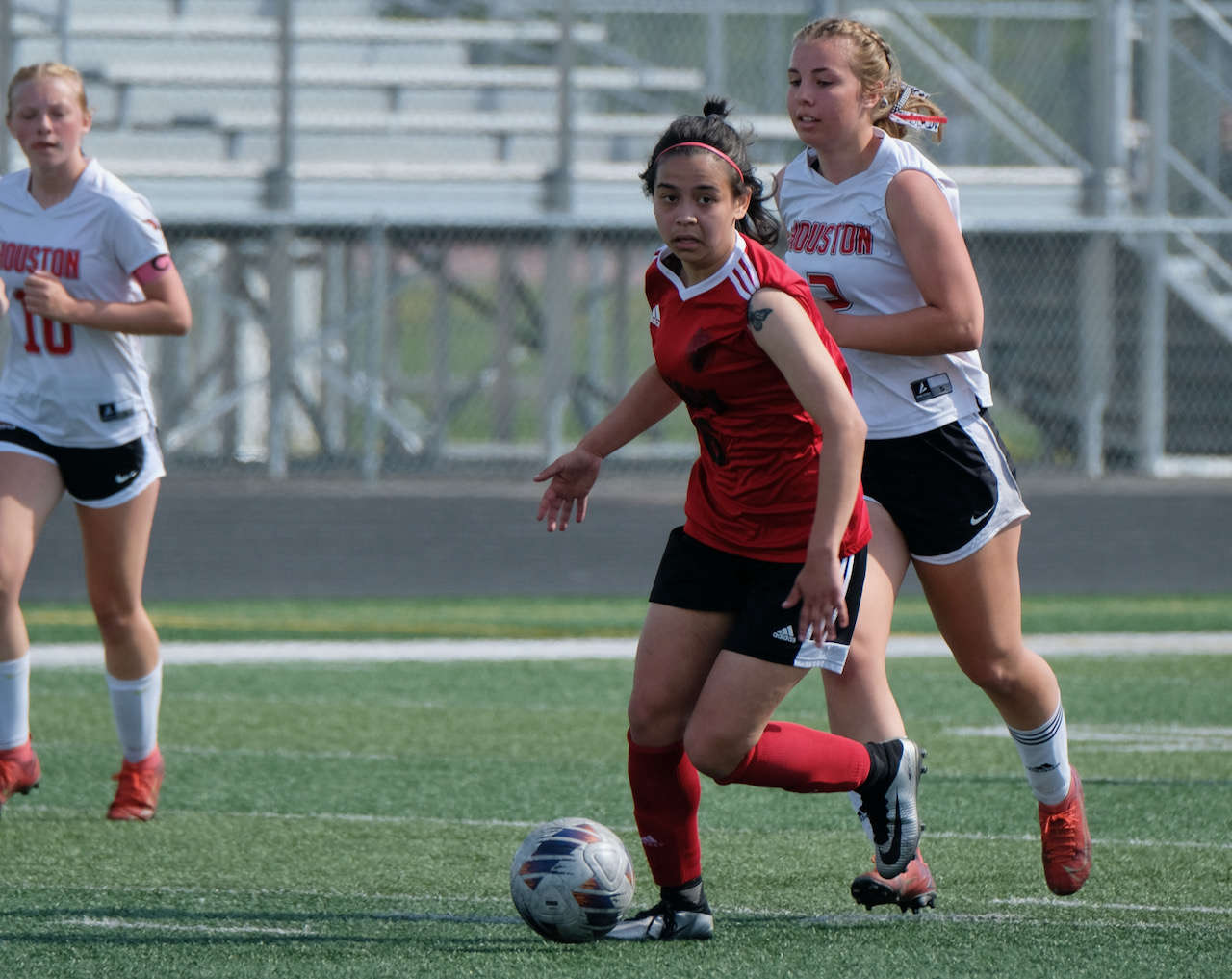 Anchorage, Alaska (KINY) - Sixty-one minutes into the ASAA Soccer State Championships, Juneau-Douglas High School: Yadaa.at Kalé senior Blake Plummer broke the Crimson Bears' all-time assist record. She slipped a pass along to classmate Kyla Bentz, who put the ball past the Houston Hawks' keeper for the team’s fourth score in what would be a 6-0 clean sheet.

“I was looking for one for a little bit and Kyla (Bentz) was able to get it,” Plummer said. “And she didn’t realize it at first… it was nice everybody was really happy for me, so it felt good.”

Plummer said the first time she and Bentz ever connected was freshman year. “It might have been state actually. She got pulled up to varsity. I remember playing her the ball, yeah, we’ve been a dynamic duo for a while… Taylor Bentley is hard shoes to fill. I’ve been playing her position. I’ve been telling myself that I can beat it and I did, so it feels nice.”

While the record is phenomenal, so was Bentz on the day. The powerful sprinting forward scored four goals on the afternoon.

Bentz hit her second goal two minutes later, assisted by C. Plummer for a 3-0 lead at the half.

Then with just over 19 minutes remaining in the game, Bentz hit her third goal on the historic assist by B. Plummer for a 4-0 advantage.

“I did not even know that was her final assist that she needed,” Bentz said. “So when she was like ‘Kyla, that was it!’ I said ‘Oh my god!’ and I lost it. I was so excited. It’s awesome. Again, I am always a Blake Plummer fan. So, exciting to see that I can give that to her.”

B. Plummer found herself on the receiving end of a touch pass from Goldstein with 15 minutes remaining and hit her second goal of the game for a 5-0 lead.

That second assist of the match by Goldstein ties her with B. Plummer for 18 assists this season, another record for the Crimson Bears and one the two seniors will play out through the state tournament.

Bentz then completed her impressive pitch outing with a fourth goal, assisted by senior Marina Lloyd.

“Kyla (Bentz) and Blake (Plummer) have been having fantastic seasons,” JDHS coach Matt Dusenberry said. “They have fantastic careers so it is nice for them to have that happen for them in the state championships.”

As much as the bold statistics and note-worry accolades drew applause and cheers from fans and the team, what wasn’t registered in the scorebook was the backfield presence of the Crimson Bears, which kept the ball from doing damage on their half of the pitch and allowed JDHS to put 50 shots against the Houston keeper.

“I think we actually came out a little nervous at the beginning,” Dusenberry said. “And then we just realized it is just a game. Then we started working the ball around, taking advantage of the fact that we can find space and we saw good things happen for us. I didn’t realize we had 50 shots on goal. Usually when you have 20 or more in a game you are giving yourself a good opportunity to win, so 50 is a lot.”

“I’m very excited and I think that we did well and I really enjoyed the game,” Kanouse said. “I love to watch everyone play together really well. I am a very surprised to receive the Hard Hat. Everyone did really good and Blake got a record and I just feel really grateful for it.”

JDHS advances to play the North Pole Patriots in a semifinal at 1 p.m. Friday at Service High School. The Patriots defeated Ketchikan 5-0 in the opening round. Ketchikan will play Houston in a consolation game Friday. 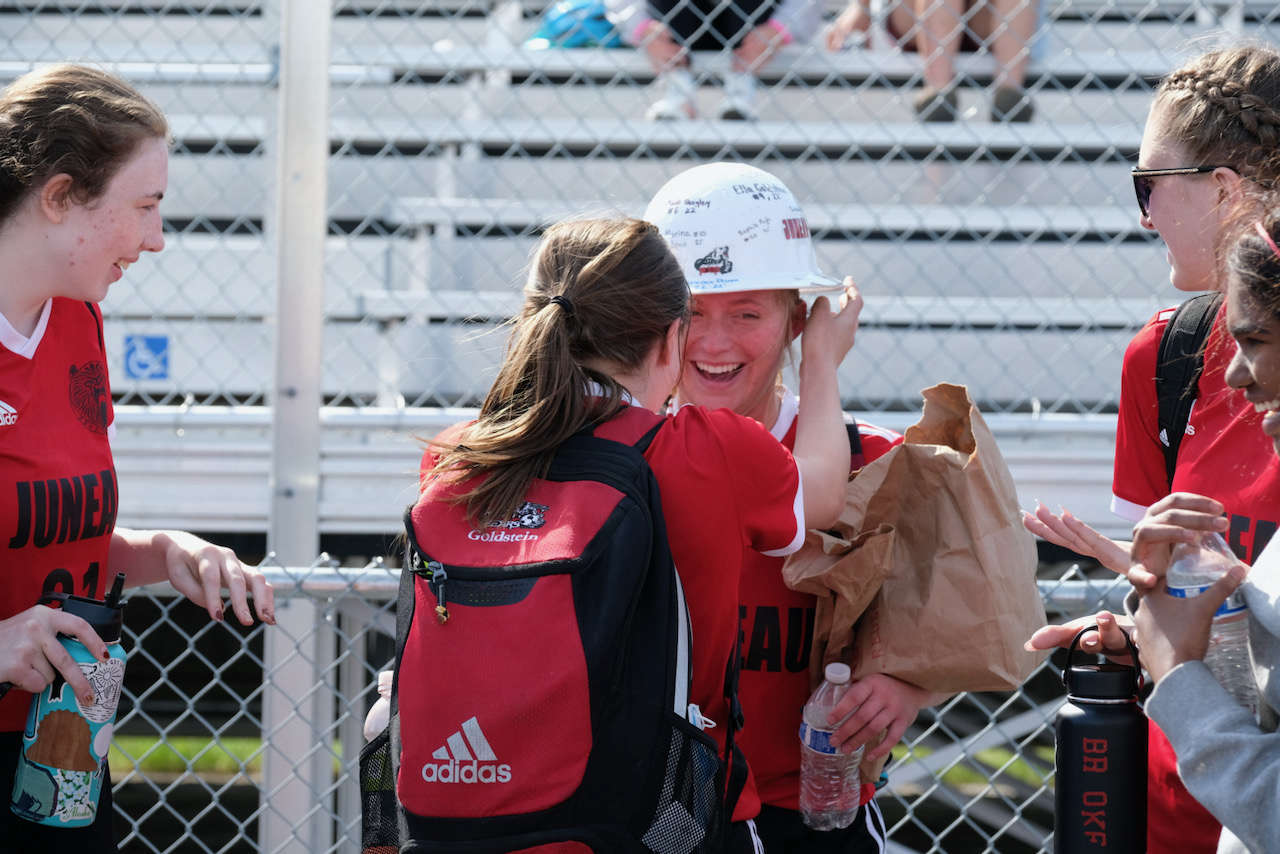 Above - JDHS senior Sierra Kanouse receives the Crimson Bears' Hard Hat Award after their 6-0 win over the Houston Hawks, Thursday, at the state soccer championships in Anchorage. 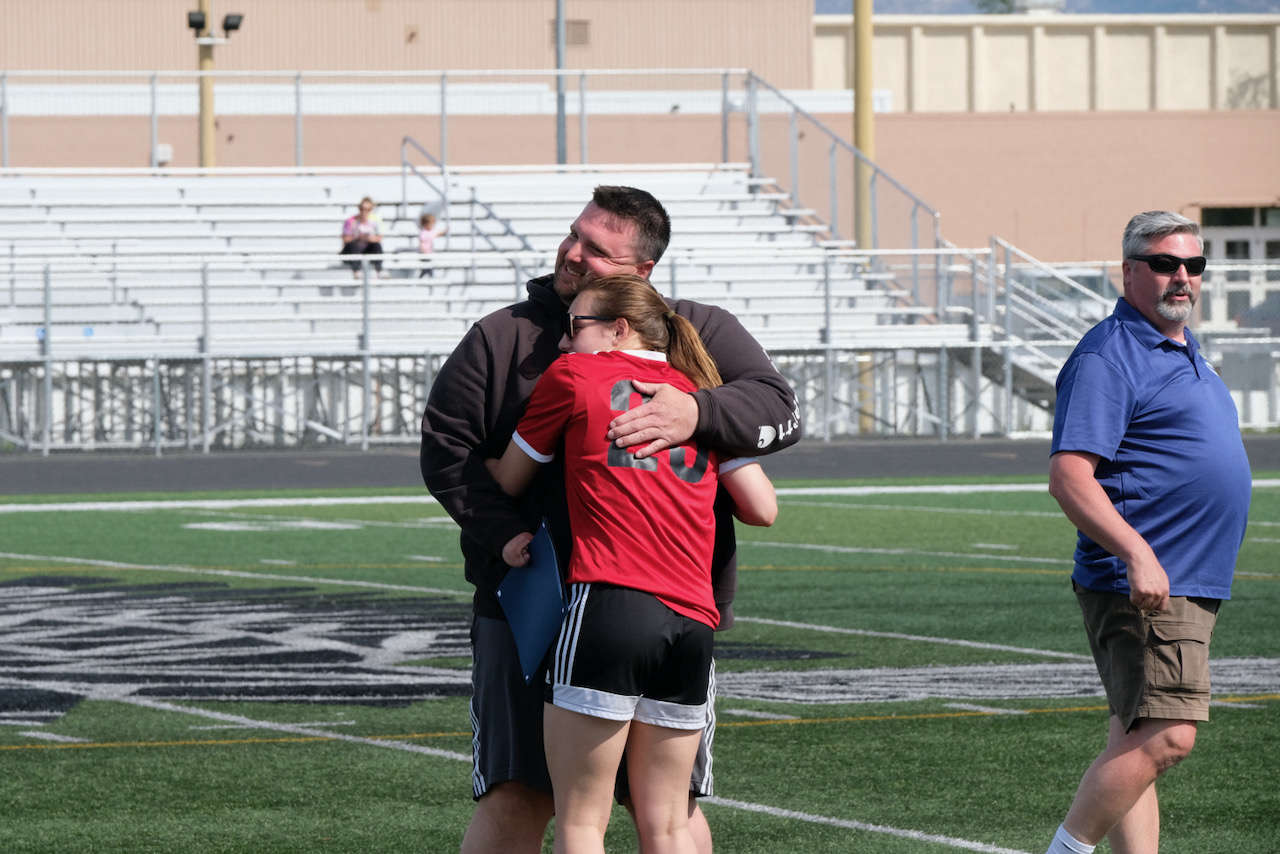 Above - Player Of The Match selection Kyla Bentz receives the certificate from JDHS athletic director, and father, Chad Bentz. 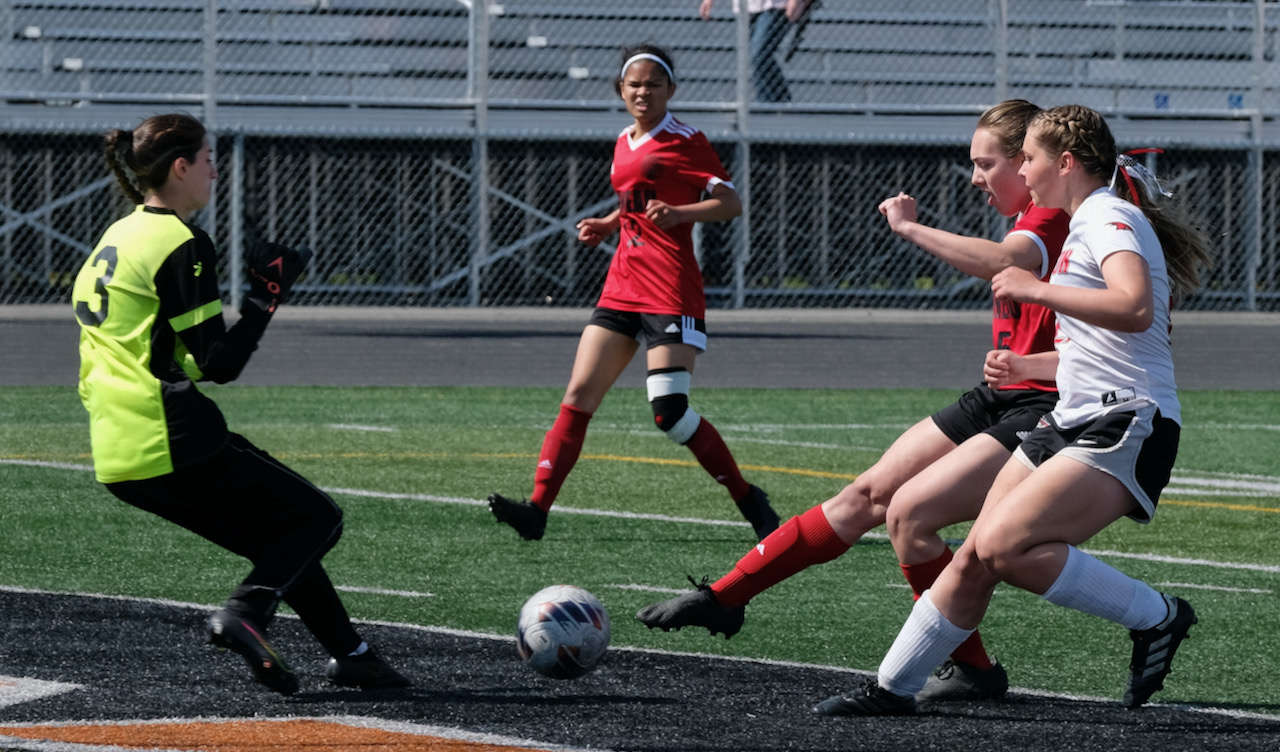 Above - JDHS senior Kyla Bentz kicks a goal from a ball played by sophomore Cadence Plummer. 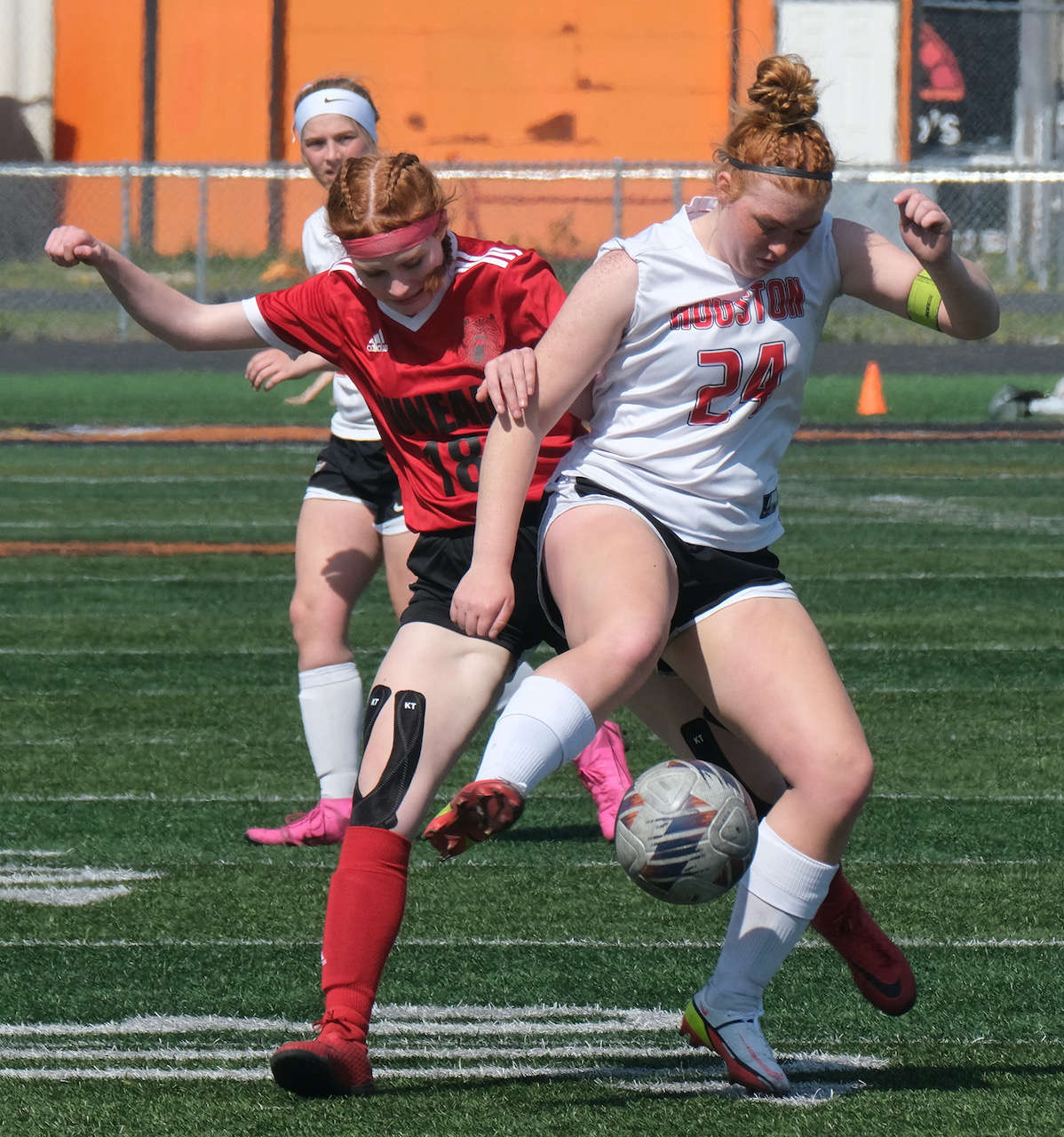 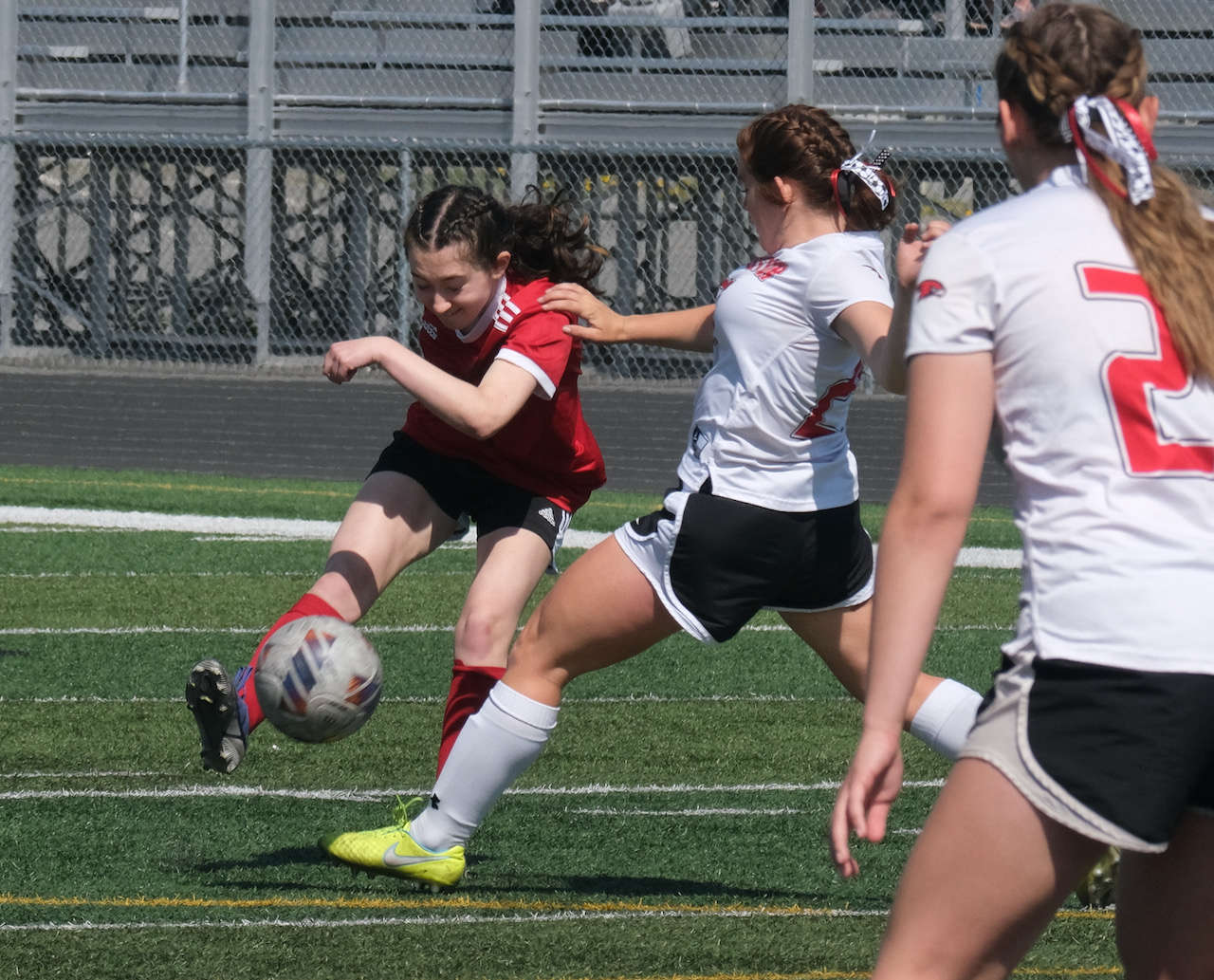