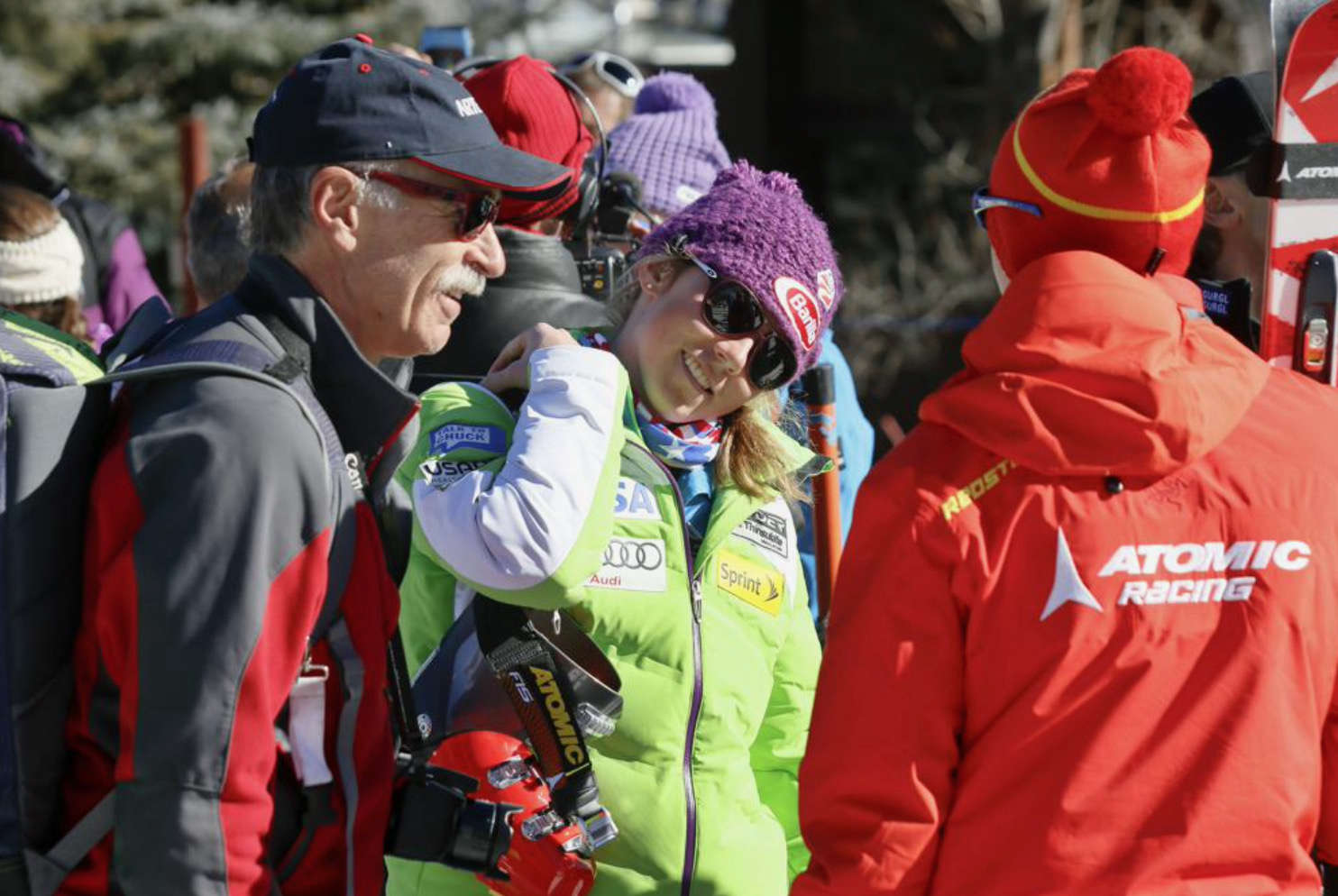 Mikaela Shiffrin, center, talks with her ski technician, right, along with her father, Jeff Shiffrin, left, after a practice run for the women's World Cup ski race in Aspen, Colo., Nov. 23, 2012. (AP Photo)

(Associated Press) - Mikaela Shiffrin glances over her right shoulder at the photo of her late father, Jeff, hanging on a wall in her Edwards, Colorado, home. She smiles. Then she bows her head, sighs and begins speaking, occasionally pausing between words, perhaps because it simply still just doesn’t seem real, nearly two years after the unfathomable loss

Of course, Shiffrin offers, she’s pondered what emotions could wash over her after she powers to the bottom of the Alpine skiing hill during the upcoming Beijing Games. Of course, Shiffrin explains, she can’t possibly predict how overwhelming they might be.

After all, Dad usually was there. For her two previous Winter Olympics. For her two previous gold medals. For so many other significant occasions — a proud smile curling under his familiar bushy mustache, an ever-present camera strap slung around his neck — and so many crisp afternoons hitting the slopes together for nothing more than family bonding and fun.

“It’s still pretty painful to think about, so I don’t think about it too much,” the 26-year-old Shiffrin said in a recent video interview with The Associated Press. “I imagine there’s going to be some really, really difficult moments. And some of it will also be OK. So it’s like anything in life. With this, the hard moments hit whenever they want. It’s not when you choose to be sad or excited.”

Her mother, Eileen, expects that Mikaela’s initial visit to the finish line in China will be “heartbreaking and maybe tough to get through.”

“Never a day goes by for us without feeling the pain of Jeff’s loss,” Eileen wrote in an email to the AP. “His absence is still gut-wrenching if we dare let our minds go there.”

Jeff Shiffrin died at age 65 on Feb. 2, 2020, in an accident at the family home in Colorado; a fund established in his memory provides financial support to U.S. Ski & Snowboard athletes.

He was an anesthesiologist who leaned on his background in clinical science to help Mikaela develop original training and workout methods. He taught her to focus, to remain in the moment, to not distract herself while racing with so much as a self-admonishing yelp. He was there for helpful hints and video sessions, yes, and for hugs, too, but largely stayed in the background when it came to the slopes, sometimes even climbing trees adjacent to a race hill.

Eileen is the skiing expert who travels the World Cup circuit — parent, coach, adviser and, as she put it, “shoulder to cry on and vent.”

Shiffrin describes her sport as “a family thing,” something her parents loved and wanted to share with Mikaela and her older brother, Taylor, who competed for the University of Denver.

Shiffrin, who is expected to enter all five individual Alpine events and be one of the main faces of the Olympics that open on Feb. 4, never can be certain when the happy memories of her father might flood back.

Or when the deep, deep sadness might set in.

“You don’t recover in one year’s time. You don’t recover in 1 1/2 years’ time,” said Mike Day, Shiffrin’s main coach with the U.S. ski team. “It comes at a different pace for everyone, and I think she’s far from finished with the grief and with the healing. She’s made some huge strides and has sort of captured a lot of the elements of her life back, but that’s one that she’ll never get back. That hits you at different moments and at different times.”

Could happen when a shuffling playlist delivers a song by Jimmy Buffett or the Beach Boys or Paul Simon or another of the singers whose music Jeff and Mikaela enjoyed together.

Could happen after a fourth-place World Cup result on a day she spent thinking a lot about her father, as happened in Croatia a year ago, when her tears were misinterpreted by some as disappointment at failing to make the podium.

Could happen while posing for a celebratory picture with teammates and coaches after a win, as happened in Austria in October.

“I was just like, ‘Well, Dad’s supposed to be there, and he’s not,’” Shiffrin said. “I’m sure there will be something like that at the Olympics.”

Triumphant or otherwise — and it’s been the former often enough for her to accumulate three World Cup overall titles, more than 70 World Cup race wins and a U.S.-record six world championship golds medals — Shiffrin often concludes a race with a stoic look.

Hard to tell how she fared based purely on her facial expression, perhaps best described as a mix of surprise and soaking it in.

“I can’t actually figure out how to celebrate and feel that emotion, when everybody thinks that I’m supposed to, in the finish area. I just don’t know what to do. Because I haven’t really comprehended it yet. And that might hit an hour later. Or a couple of weeks later. Or even years later. Or it might never hit,” Shiffrin said, then turned the topic back to her father, adding: “It’s sort of similar to that. These moments of comprehension that he’s not coming back and he won’t ever be there again; they come randomly or they come with a trigger.”

It is reminiscent of a phenomenon Jeff Shiffrin described in a phone interview with the AP shortly before the 2018 Pyeongchang Olympics, where Mikaela would collect a gold in the giant slalom and a silver in the combined to go along with the slalom gold she earned at the 2014 Sochi Games when she was 18.

“Generally, I don’t care to get too emotional about things, because I don’t like the feeling, except for when it’s exhilarating. And every now and then, something happens that maybe you weren’t really expecting — or you were hoping for and expecting, but something didn’t go exactly the way you thought it might (and) the outcome was still wonderful,” he said at the time. “I’m thinking about the second run in the slalom at Sochi. Frontal lobes go offline and it’s pure emotion and it’s fun. It’s like, ‘Wow!’”

In that same conversation, he spoke about being a nervous spectator.

He mentioned that taking photos during races helped with that.

And he described relishing the chance to watch Mikaela do what she does as well, or better, than anyone else around — and getting to observe others watching her: “Standing up on the hill, looking down at the crowd roaring, just plain roaring, because my kid is skiing: That’s like, ‘God, are you kidding me?!’”

On Jan. 12, Shiffrin posted a note on social media the day after her 47th slalom victory broke the record for most career World Cup race wins in one event.

She thanked her team “for continuing to pick up my pieces on a daily basis for the last two years, and for giving me the wonderful gift to simply keep trying.”

She thanked Eileen for her “strength, love, support, and belief.”

She thanked Jeff, too: “Dad, I hope you had a good view.”