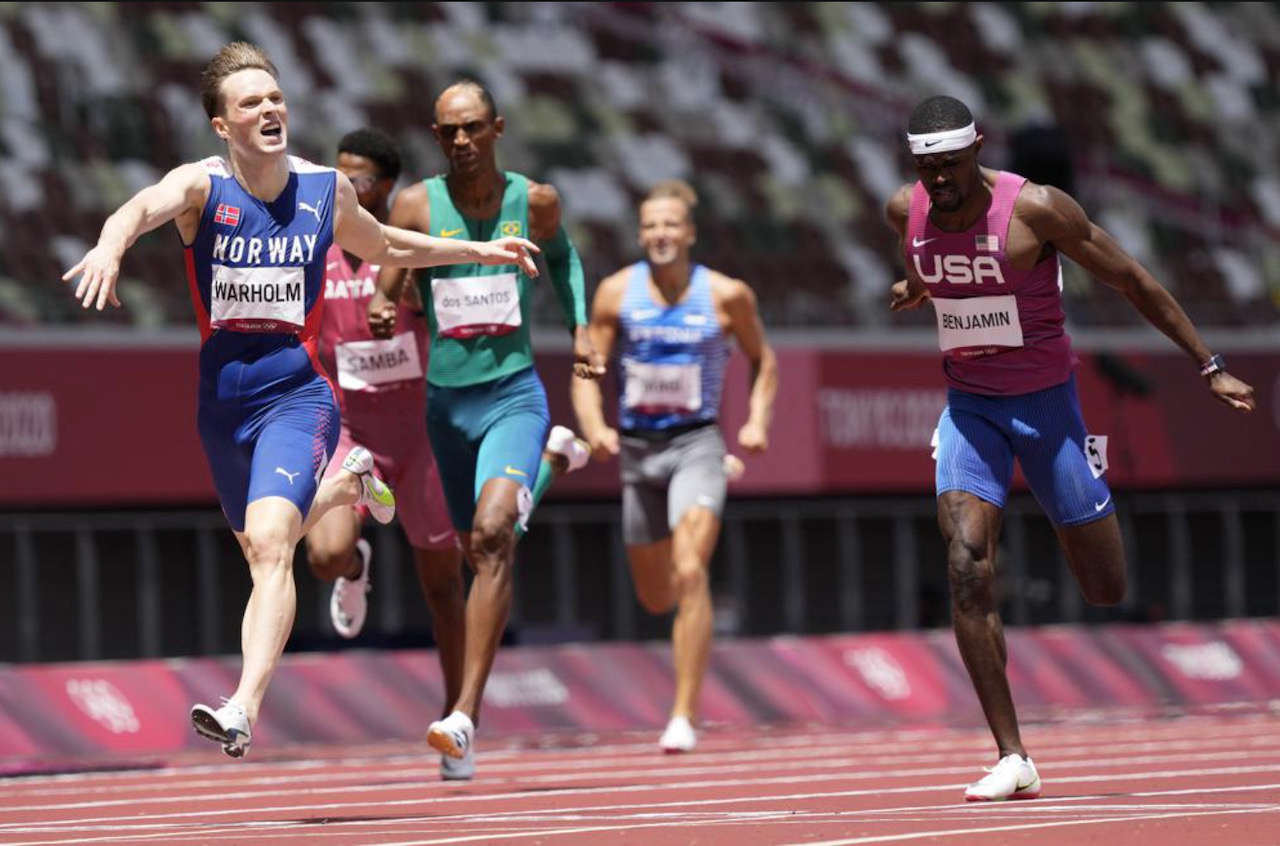 Karsten Warholm, of Norway wins the gold medal ahead of Rai Benjamin, of United States in the 400-meter hurdles at the 2020 Summer Olympics, Tuesday, in Tokyo, Japan. (AP / Martin Meissner)

TOKYO (AP) — When brash Norwegian hurdler Karsten Warholm led the field to the starting line on a steamy afternoon at Olympic Stadium, he and his seven opponents had every reason to expect they’d be part of something special. It turned out to be more than that.

This gathering of the world’s best 400-meter hurdlers Tuesday produced a gold medal for Warholm, a world record, a masterpiece and slice of history. It also might have been one of the best races ever run.

“I never thought in my wildest imagination that this would be possible,” Warholm said after smashing his own world record in a time of 45.94 seconds.

In deciding where the race stands in the annals of Olympic history, there is a lot to consider:

—The man who finished behind Warholm, Rai Benjamin, ran more than half a second faster than any other hurdler in history: 46.17. Had anyone dared tell him he would run that fast and finish second, Benjamin said, “I would probably beat you up and tell you to get out of my room.”

—The third-place finisher, Alison dos Santos of Brazil, finished in 46.72, which would’ve been a world record five weeks earlier.

—The man who finished seventh in the eight-man field, Rasmus Magi of Estonia, was barely in the frame of photos taken from behind the finish line. But he was one of six to set either a world, continental or national record.

Warholm’s pull-away win in front of an empty stadium — someday, thousands might brag they were there — eclipsed his month-old world record by .76 seconds.

Hard to believe, even for the athletes watching it unfold in front of them.

“After the second hurdle. I was like, s—-. If you go after them, it’s suicidal,” said Kyron McMaster, the fourth-place finisher whose time of 47.08 would’ve won the last six Olympics.

On July 1, Warholm brought it down to 46.7, which felt like either a brazen rejoinder to Benjamin, or a sign of things to come.

Only a week before that, at U.S. Olympic trials, Benjamin had run 46.83 to become the fourth man to crack 47. After the run, he announced that he felt he had a “low 46” in him somewhere, maybe in Tokyo.

That back-and-forth set the stage for Tuesday, and a showdown between rivals who have brought this event to a pinnacle not seen since the 1980s.  Over a decade of dominance, Edwin Moses won 107 straight finals, two Olympic golds and lowered the world record four times.

One thing Moses didn’t have was a rival, which might have kept him from going lower than the 47.02 that stood as the record for nearly nine years before Young.

Warholm and Benjamin are rivals. In the pre-race introductions, they both thumped their chests like boxers, and Warholm slapped himself in the face a few times.

The went to their respective lanes, set their starting blocks, dug their heels in, lined up and took off.

Running out of Lane 6, he caught the guys who started in front of him after three hurdles and was clearly in the lead at the halfway point.

Covering the distance between the barriers 13 powerful steps at a time, Warholm never came close to breaking stride. At the eighth hurdle, Benjamin was about a body length behind and seemed to be closing. But in the homestretch, Warholm pulled away. He sped through the finish with arms-a-flailing.

As his time flashed on the scoreboard, he tore open his jersey. “Pure emotions coming out.” It was a scene reminiscent of the time he announced himself on the world stage with his victory at world championships in London in 2017, complete with a wide-eyed, Viking helmet-wearing post-race celebration.

This moment, however, was set up back in 2018, when Qatar’s Abderrahman Samba became the second man to crack 47 seconds, a barrier that Warholm had not yet reached.

“I decided I didn’t like to lose,” Warholm said. “So I went back, and I trained very hard.”

Samba was in this final, too. He finished fifth in 47.12 — a season best for him, but he was one of only two hurdlers not to hit a national record.

Warholm didn’t just break the world record, he went under the 46-second barrier that nobody had seriously been thinking about.

“Sometimes in training, my coaches keep telling me this could be possible,” Warholm said. “But it was hard to imagine it because it’s a big barrier. 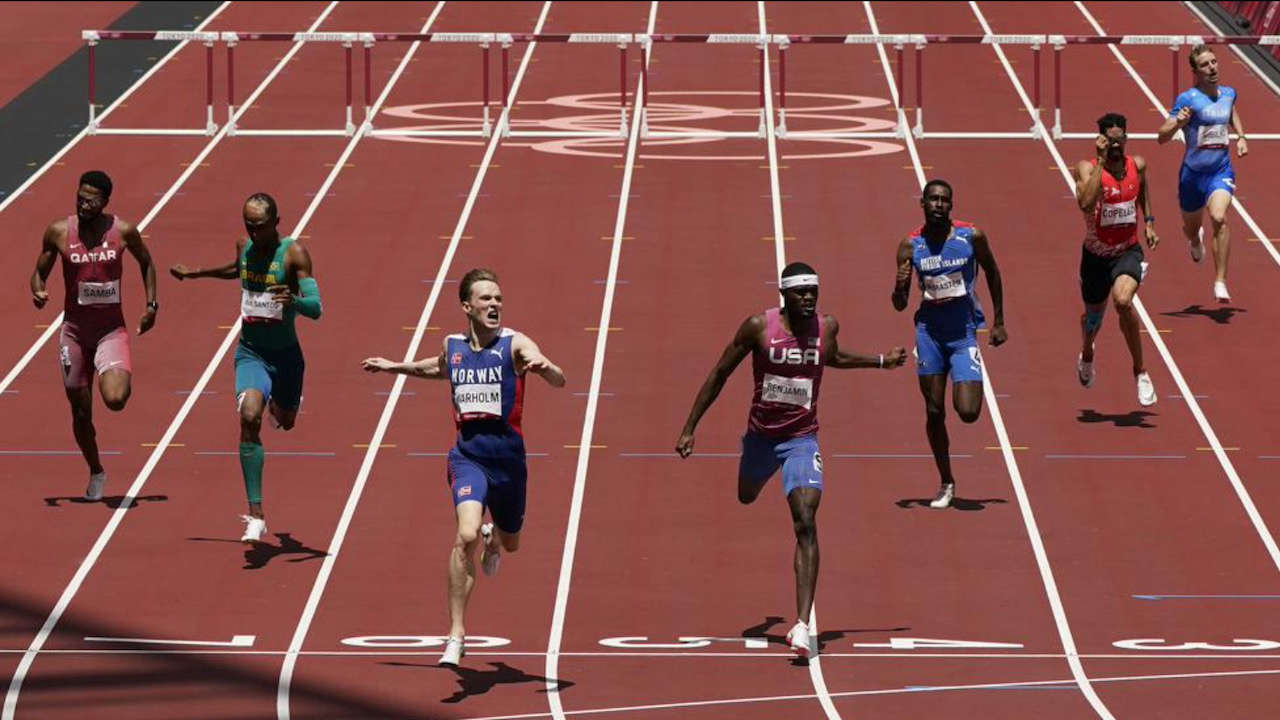