McLaughlin’s Next Move Among Key Stories on Road to ’24 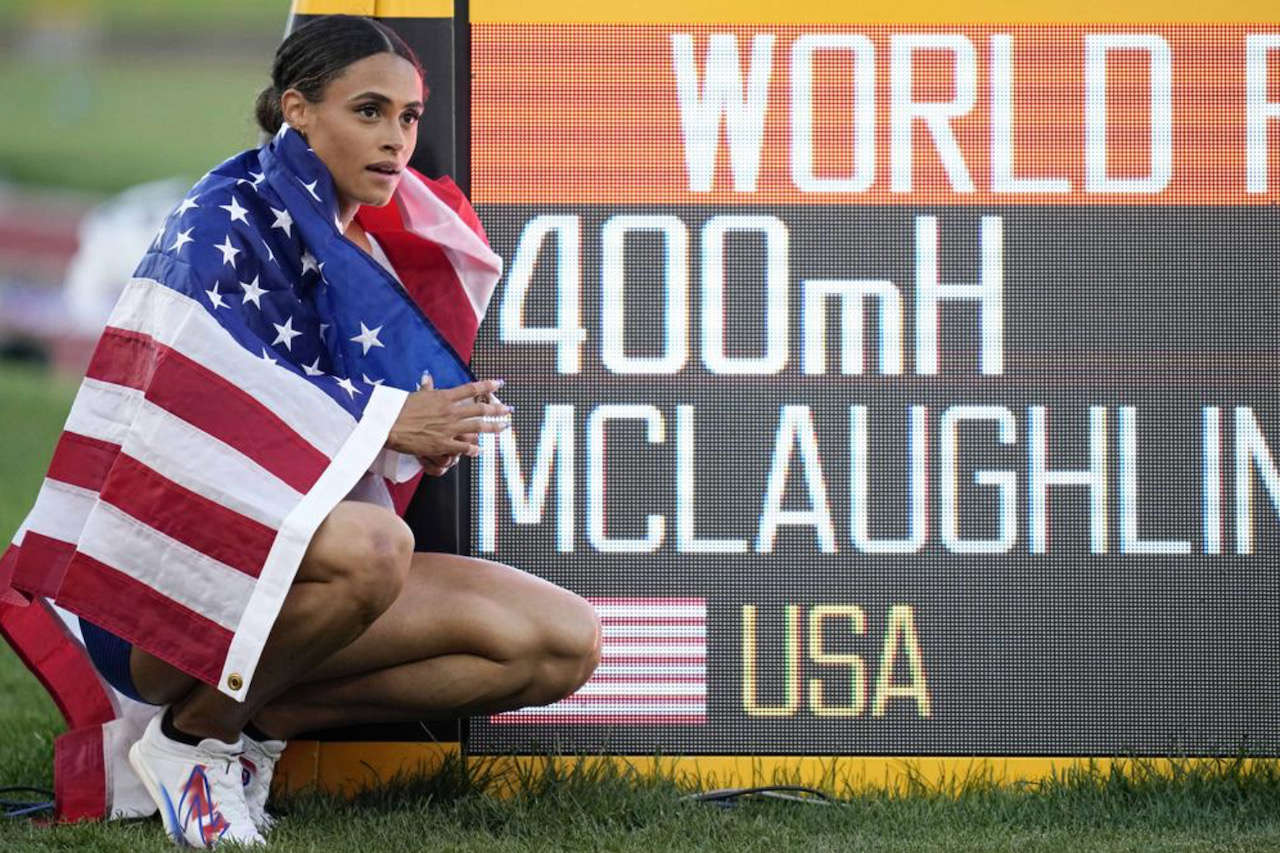 Gold medalist Sydney McLaughlin, of the United States, poses by a sign after winning the final of the women's 400-meter hurdles at the World Athletics Championships on Friday, July 22, 2022, in Eugene, Ore. (AP Photo)

EUGENE, Ore. (AP) — The conversation about what track sensation Sydney McLaughlin will do next involves more than the clock.

Yes, she brought the record in her 400-meter hurdles race down by nearly three-quarters of a second at the world championships, to a once-unthinkable mark of 50.68 seconds. But it was her run in the women's 4x400 relay that might really get people wondering.

The Paris Olympics start two years and two days from Sunday’s close of the world championships in Eugene, Oregon. McLaughlin is 22, with plenty of work yet to do in the hurdles, she said. But she also hinted that the 400-flat, or even the 100 hurdles, could be in her future.

How far in her future will be one of the most intriguing storylines between now and Paris. What feels certain is that she can be a top contender in any discipline she chooses.

McLaughlin ran her anchor lap in Sunday’s gold-medal 4x400 in 47.91 seconds — more than a second faster than any other runner in the race.

“Take the hurdles away, it’s a little bit easier,” she said.

By the way, her 50.68 in the hurdles would’ve been good for seventh in the regular 400, where they didn’t have to traverse the 10 barriers.

Here a few other things to look forward to in track and field between now and the meet at the Stade de France in 2024:

The quiet and humble Erriyon Knighton vs. the charismatic and confident Noah Lyles. This is shaping up to be a 200-meter rivalry that could last for quite some time.

In one lane, there’s Knighton, the 18-year-old from Florida who could’ve been a standout football player but chose track. He prefers to do his talking with his spikes.

In another, there’s two-time world 200-meter champion Noah Lyles, the 25-year-old from Virginia by way of Florida who’s dealt with mental health issues in a public way and just broke the American record. He’s not afraid to stir the pot, like when he pointed at Knighton after beating him at nationals.

Both have the speed to be the next big thing in American track.

“Noah Lyles told me I will be one of the greatest in the sport,” said Knighton, who finished third in the 200. “It feels good coming from him.”

But Lyles won’t go down quietly. He ran 19.31 seconds in the 200 final, topping one of the most hallowed records on the books: Michael Johnson’s American mark of 19.32 that had stood since the 1996 Olympics.

The order may change on the podium, but the destination of the medals does not. Jamaican women continue to own the sprints.

Shelly-Ann Fraser-Pryce led the island country's sweep of the 100 meters. Led by Shericka Jackson and her second-fastest time ever, the first nation of speed also took gold and silver in the 200.

“I came out and put on the show,” Jackson said.

The Jamaicans have a knack for that. When Usain Bolt hung 'em up after the 2017 worlds, the focus on the island shifted back to the women, who had dominated in the pre-Bolt era, too, with the likes of Merlene Ottey and Veronica Campbell-Brown.

“We’re finally getting the recognition that we deserve,” Fraser-Pryce said. “I’m glad we’re able to do that and to show the world, as women, we’re strong.”

And all of it came with Elaine Thompson-Herah, the two-time Olympic champion in both the 100 and 200, having a subpar meet. She finished third in the 100 and seventh in the 200.

Thompson-Herah will try for a pair of three-peats in Paris. The world will wait to see if the 35-year-old Fraser-Pryce will hang on for two more years, as well. She certainly seemed to be having fun in Oregon.

Ukraine brought 22 athletes to Oregon and they left with two medals — a silver from high jumper Yaroslava Mahuchikh that came an evening after her high jump compatriot, Andriy Protsenko, won bronze.

For these athletes, simply being here was a massive victory. Displaced from their homes after the Russian invasion of their country, they trained in faraway countries while often having to worry about their families, who were fighting or sheltering in Ukraine.

Russian athletes were not allowed in the meet. World Athletics President Seb Coe explained there was no way to justify allowing athletes from an invading country to compete against Ukrainian athletes who had to risk their lives simply to make it this far.

In a best-case scenario, the war will be over by 2024. If not, each sport sets requirements for participating in events, including the Olympics, but the IOC will certainly have a say about whether Russians can compete against Ukrainians in Paris.

Armand Duplantis, the Louisiana-born pole vaulter who represents Sweden, said he felt room between himself and the bar when he cleared a world-record 6.01 meters in the last jump of the last event to wrap up Sunday night at this year’s worlds.

Hurdler Karsten Warholm of Norway, whose world record of 45.94 in the 400 hurdles was not touched, had his training hindered by injury this year and finished seventh. Still, Alison Dos Santos of Brazil ran in a world-championship-record time of 46.29. American Rai Benjamin will be back, as well, in what remains one of the most stacked events on the program. 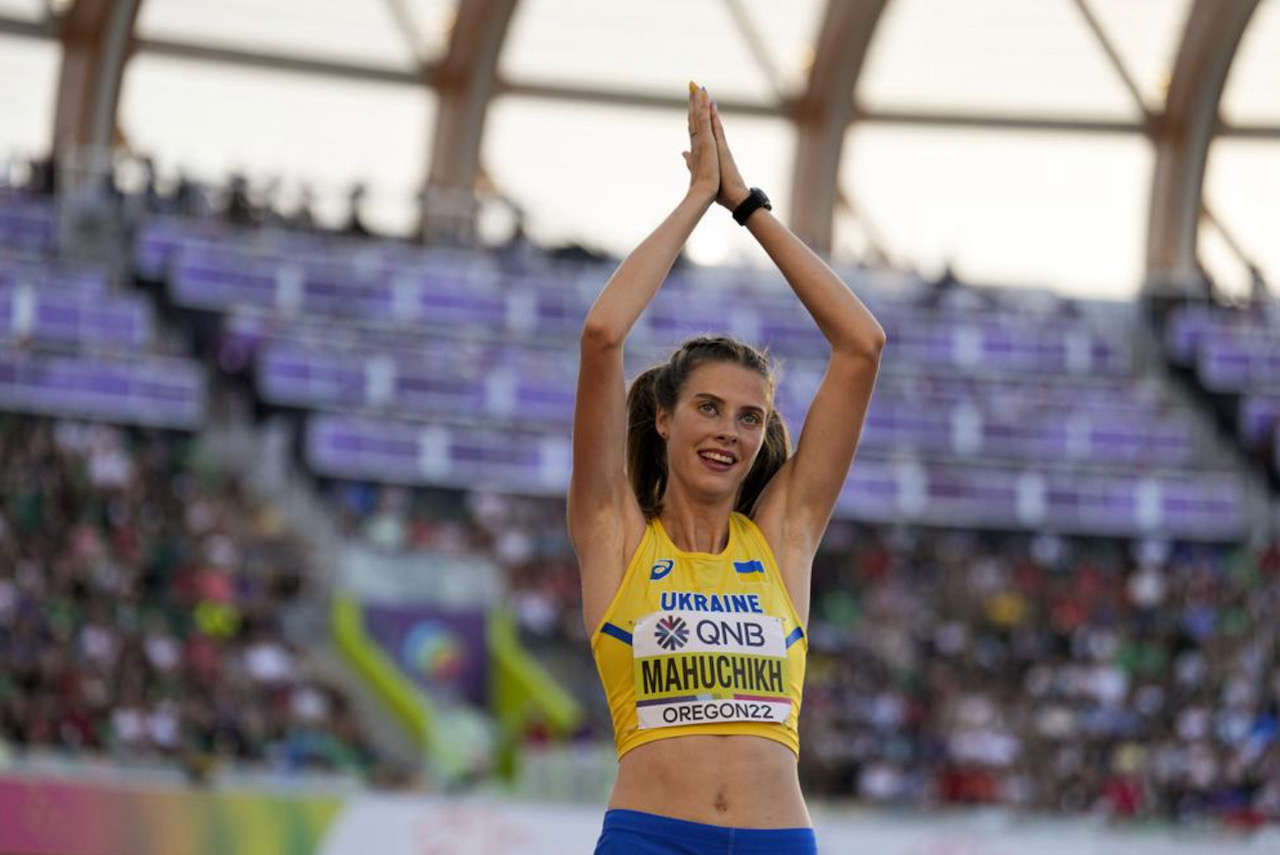 Above - Yaroslava Mahuchikh, of Ukraine, celebrates after the women's high jump final at the World Athletics Championships on Tuesday, July 19, 2022, in Eugene, Ore.(AP Photo)