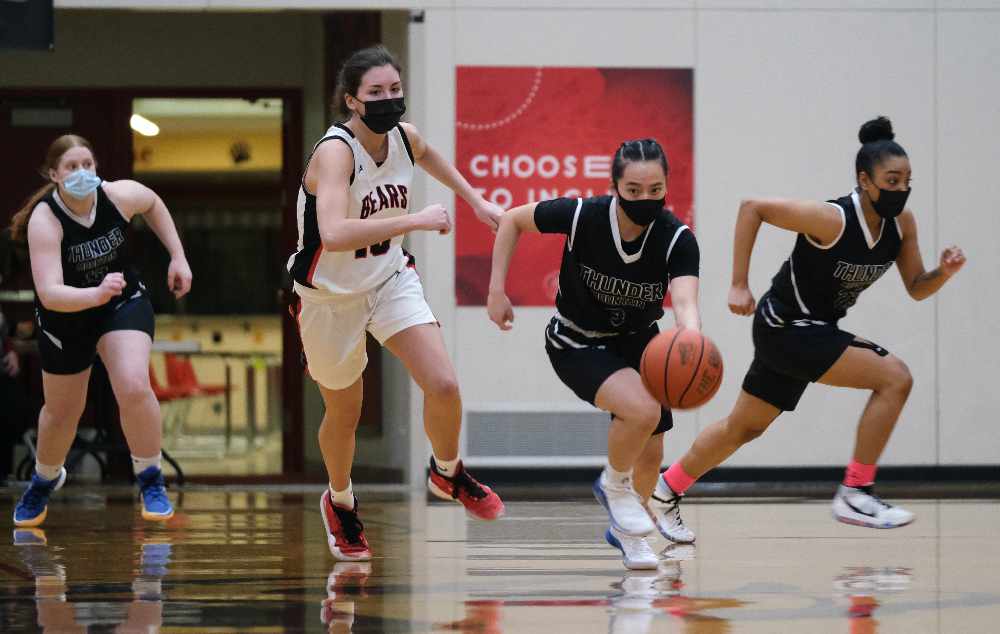 The Thunder Mountain Lady Falcons 46-41 win over their cross-town rival Juneau-Douglas Yadaa.at Kalé on Tuesday was the first Region V tournament win for their seniors since entering the program as freshmen.

Prior to a win against Ketchikan last season, the Lady Falcons had lost 26 games in a row to the Lady Kings and were 1-27 in their last 28 games against Juneau.

“On an emotional and mental level this is a huge thing,” Thunder Mountain coach Andy Lee said. “We had not beaten Ketchikan and Juneau in the same season. We got over that hurdle and it was baby steps, but painful baby steps. We had to learn to win, we had to learn to win late, and we trusted each other.”

Thunder Mountain will face top-seed Ketchikan (15-1/9-1) for the Region V Championship and a state berth on Saturday at 2:45 p.m. in Ketchikan.

This season the Lady Falcons have lost twice by one point to the Lady Kings and once by three points. They have beaten Kayhi by four points.

“We will celebrate tonight (Tuesday) and tomorrow until four o’clock,” TMHS coach Lee said. “And at four o’clock when we walk in that gym door, celebration ends and preparation begins.”

When TMHS beat JDHS 52-45 in a regular season game in the Crimson Bears den two weeks ago, they lost the next night to JDHS 54-35.

“Because it was such an emotional victory, 24 hours later we had nothing left in the tank,” Lee said. “Thankfully we don’t play until the 20th now. I told them to celebrate until they walk into the door for practice tomorrow, and then we flip on the Ketchikan switch. That is our total focus.”