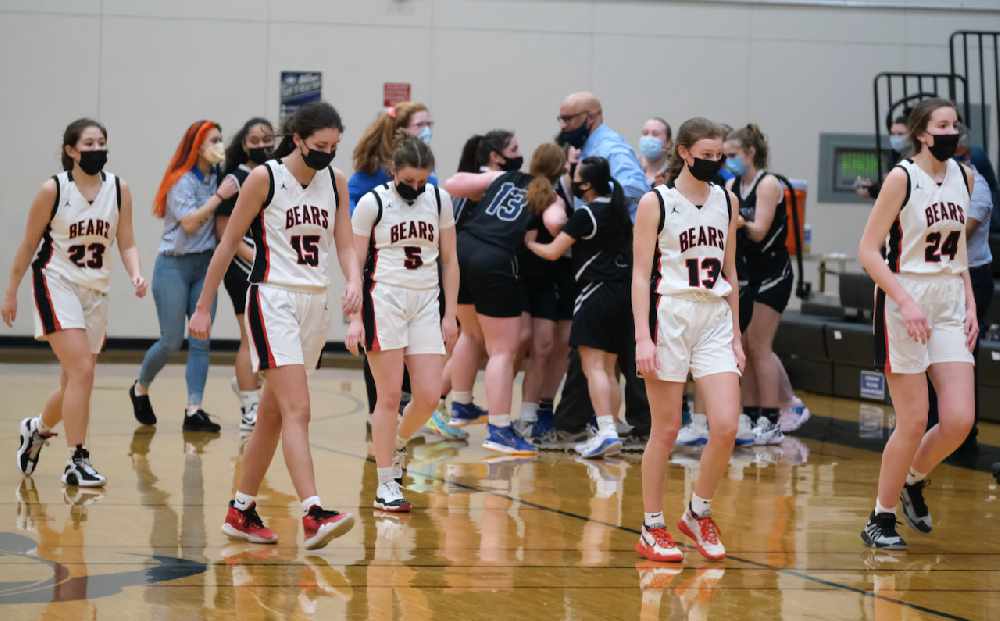 JUNEAU, ALASKA (KINY) - The Thunder Mountain Lady Falcons eliminated the Juneau-Douglas Yadaa.at Kalé Crimson Bears girls from the Southeast Region V 4A Tournament in a double-overtime thriller on Tuesday in the JDHS gymnasium.

JUNEAU, ALASKA (KINY) - The Thunder Mountain Lady Falcons eliminated the Juneau-Douglas Yadaa.at Kalé Crimson Bears girls from the Southeast Region V 4A Tournament in a double-overtime thriller on Tuesday in the JDHS gymnasium.

“I think in double overtime your legs are just tired,” JDHS senior Kiana Potter said. “We had two essential players foul out and that is hard, but it is what it is.”

TMHS senior Mariah Tanuvasa-Tuvaifale put in a rebound with 36 seconds remaining for a 45-40 lead.

“It was definitely us coming together as a team,” Traxler said. “No one expects this result, no one expects us to be the winners. We’ve wanted it and we have been working for it and we deserved it this season. One of the best things about our team is that other team’s defenses can’t clamp down on one person because then the rest of us are open. That is the best part of our team, all of us are great scorers, great players, we are all equal across the board.”

JDHS opened a 7-0 advantage in the first quarter as sophomore post Ashley Laudert scored twice inside and junior Trinity Jackson hit from beyond the arch. Laudert also blocked a shot and secured two boards in the stanza.

TMHS’ Kreischer made a three-pointer with 1:57 remaining in the quarter for the Lady Falcons’ first basket of the game and Traxler added a basket and a free throw.

Potter answered with her own deep shot and added two free throws for the Crimson Bears 12-7 advantage after eight minutes of action.

“I think our attitudes were key,” Kreischer said. “We were down by seven in the first part of the first quarter and we just didn’t give up.”

TMHS’ Strong scored six of her nine game points in the second quarter to help pull the Lady Falcons to within one point, 17-16 at the break. JDHS’ Pusich scored four of her eight points in the stanza and teammate Laudert snatched four rebounds to defend the lead.

“Our entire team did a really good job energy wise,” Strong said. “We were all super energetic, we all believe in each other and believed we could pull out the win from the get go. It can be difficult sometimes, especially with some of those taller girls, but I think everybody worked their butts off. This is probably the best rebounding game we have had as a team the entire year.”

Thunder Mountain took their first lead of the game 15 seconds into the third quarter as Mary Neal Garcia broke away from her defender to hit a deep shot for a 19-17 advantage.

Potter would score seven of her game-high 15 points in the quarter, including a pair of free throws that sent Lady Falcons’ senior forward Iyanah Brewer to the bench with her third foul at the 3:57 mark.

Neither team held more than a five-point advantage in the period as the Crimson Bears pressured with a man-to-man defense and the Lady Falcons utilized a zone to smother the key.

Pusich hit inside for a 27-22 Crimson Bears lead at the 1:11 mark but Kreischer notched a pair of free throws for the Lady Falcons to close to 27-24 and Mary Neal Garcia tied the score from beyond the arch to end the third quarter.

Laudert scored six of her 10 points for JDHS in the fourth quarter, including the stanza’s first basket on an assist by Pusich at the 4:40 mark.

Traxler answered for the Lady Falcons on a driving shot to tie the game at 29, and Potter hit a free throw to give the Crimson Bears a 30-29 lead at the 3:25 mark.

With 2:33 remaining in the fourth quarter the Crimson Bears’ Jackson drew her fifth foul, her third in the stanza, and the Lady Falcons’ Tanuvasa-Tuvaifale hit one of two free throws to tie the score at 30.

Laudert hit inside for back-to-back scores and a 34-32 lead for the Crimson Bears at the 1:10 mark.

Traxler gave the Lady Falcons a 36-34 lead at the 3:30 mark only to see Crimson Bears junior Skylar Tuckwood hit from deep for a 37-36 advantage.

Kreischen tied the game at 37, hitting one of two free throws at the 2:30 mark, and Strong added two more from the charity stripe for a 39-37 Lady Falcons advantage with 1:50 remaining.

The Crimson Bears tied the game 39, at the 1:26 mark on a back cut by Tuckwood and an assist by Laudert from the high post.

Both teams struggled to get a good shot off in the final minute of the first overtime.

“I thought that we played hard and we didn’t quit,” Crimson Bears coach Potter said, adding later: “Unfortunately we didn’t make enough shots to win. We didn’t shoot the ball from the free throw line as we would have liked.”

The Crimson Bears hit 9-19 free throws during the game and the Lady Falcons were 19-30.

“They didn’t exactly shoot a fantastic percentage but they shot more of them and they shot a better percentage,” Potter said. “That is the difference in the score, but I don’t think that there was any moment where the game pivoted. Except with a minute and a half to go in the second overtime when they got up three. I thought both teams were certainly blocking out much better than they ever did in any of our other contests. I thought our post player had her best game of the year by far, I thought that everybody else was good to solid. Obviously Trinity (Jackson) and Gabbi (George-Frank) did not get to play as much as they would have liked but we were doing the things that we tried to do, we took the shots that we expected to take but just didn’t make them.”

TMHS coach Andy Lee said their team theme this season was about the little things.

“The little things included to overcome the whims of COVID cancellations and changes and masks,” Lee said. “We put those small things in their place and then we did the little things on the court and it all came together.”

“We did win, in a sense,” Potter said. “We had a win against COVID. We didn’t really have a normal off season of attending team or individual camps.The girls got together a couple times informally. We graduated so much last season, but I thought our key players did a really good job of stepping in and filling that void.”