Kriegmont Adjusting to Division I Basketball 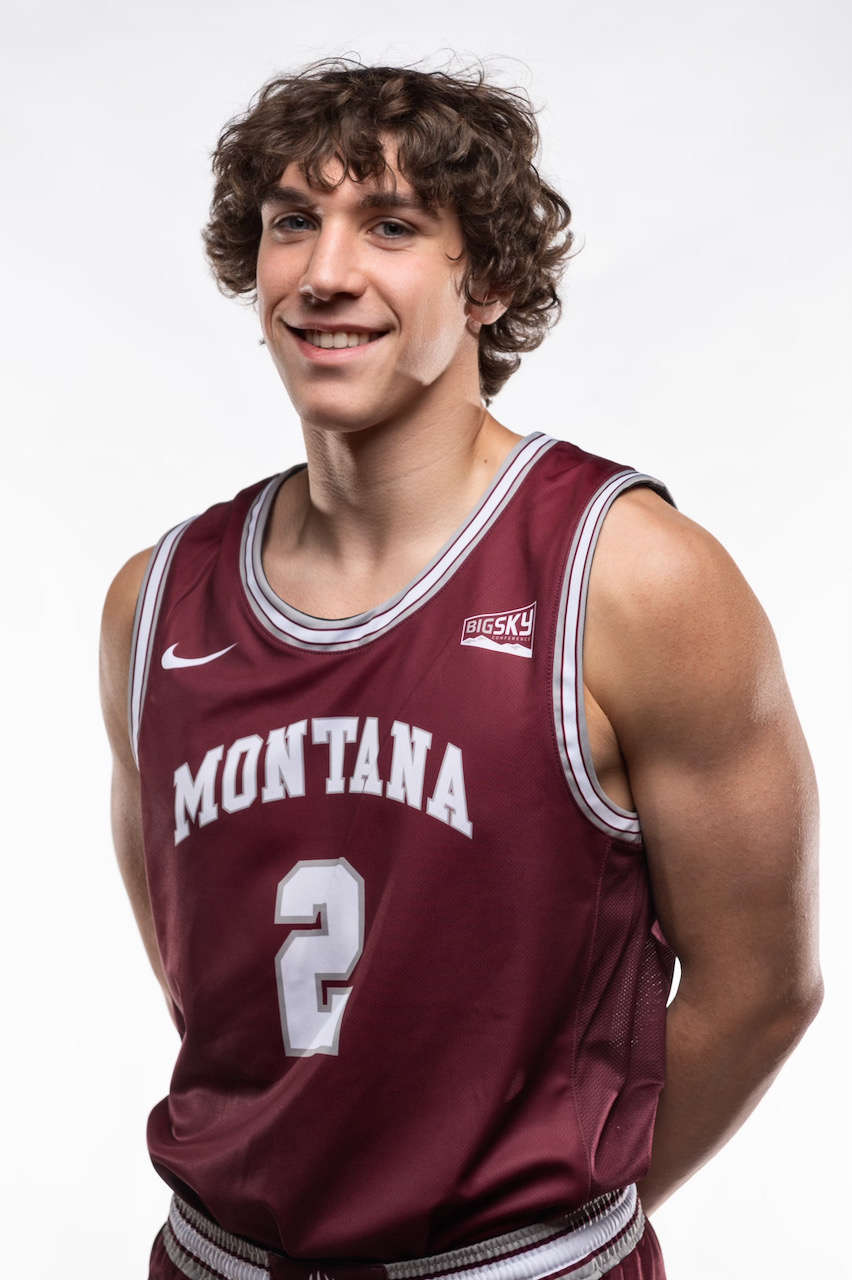 Juneau, Alaska (KINY) - Juneau-Douglas High School Yadaa.at Kalé 2021 graduate Cooper Kriegmont is not taking NCAA Division I basketball opponents by storm, but the college basketball forecast shows he is a huge weather system brewing on the horizon in Missoula, Montana, as he redshirts for the University of Montana Grizzlies program.

“Cooper has been a good addition to our program,” UM assistant coach Jay Flores said. “He knows what it’s like to be a part of a winning team. Since he is redshirting he has come in and worked hard in practice to help our team be ready to play and to keep getting better individually.”

Kriegmont, the JDHS leading scorer and most valuable player last season and the Region V tournament MVP for the region champion Crimson Bears team, commented on his daily schedule for the Grizzlies program.

“They have me running around all the time for basketball,” Kriegmont said. “I wake up in the morning for an 8 a.m. weight lifting session.”

Weights are six days a week. A quick shower, breakfast and a few hours of classroom studies are followed by a 30-minute break and then practice.

“Basically the whole evening is spent with the team,” he said.

A half hour of film and three-and-a-half hours of practice gives way to a team perk - a free meal at the Double Tree restaurant. Then the team hits mandatory study hall. Players must maintain a 3.0 or better to be part of the athletic programs.

“We all have our own academic advisor,” Kriegmont, a business major, said. “Our own coach on the team that kind of checks in on us. And then two hours of study hall every night. It is a big part.”

Kriegmont accepted a preferred walk-on position with the Grizzlies and signed a letter of intent to attend UM last May. As a redshirt he is putting in the time and effort in the classroom and on the practice court with no expectation of playing in a college game this season.

“Any time you redshirt it shows the kids' maturity,” assistant coach Flores said. “It is tough to do. You have to be able, at 18 years old, to look at the big picture. He has done a good job with that in the sense that it is hard to show up at practice, give it your all every day, get extra workouts in, like go to the weight room and all that, and never get the reward of playing in the game. He has done a good job for sure. In terms of the future, the one thing we know about him is he is not afraid to put his nose down and grind and continue to get better. As the team unfolds and he gets older he will have different areas he will help out in. His objective is to get better every day and he has done a good job of that. And he got over a 3.0 in his first semester of college academically. Obviously the workload is different both academically and athletically and he has done a great job so far.”

The redshirt option was Kriegmont’s choice.

“I didn’t feel like my game really translated quite as well as I liked it to,” Kriegmont said. “I thought if I just take a year to really work on my game, just get the fundamentals down of what Division I basketball is like, I would have a better chance next year. I knew I wouldn’t play this year so I thought I might as well keep this year in case I get it on the tail end. So I will just work hard and see how it goes from there.”

Kriegmont said he had some holes he wanted to fill.

“They do all the little things that you do as a basketball player,” he said. “But they do it five times better. It is so much more competitive at this level. Just stuff you don’t think about all the time as a basketball player, they do all that stuff perfect. They really don’t make mistakes. Our team, especially, is a highly ranked defensive team and one of the top teams in our conference for the least amount of turnovers in a game. And that’s the same thing in practice, you get a turnover and it’s a big mess up.”

Although his position has changed from a forward or wing in high school to a college point guard, one thing has not.

“We do rebounding and defensive drills every single day,” Kriegmont said. “They preach it every single day. Rebounding is huge. It doesn’t matter what size you are on the court or how fast you are, you have to rebound.”

Kriegmont also noted he has to improve his ball handling.

“I kind of got away with it in high school because of my speed and strength,” he said. “But everyone here is my size or bigger. They are all strong and fast. It is all the little things… passes have to be right to them, there are always hands when your are driving. It is definitely a big change. Every guy in Division I was the best guy on their high school team. You go from touching the ball on every possession to maybe touching the ball two to three times a game.”

Just as athletes are different at the DI level, coaches also have a different mindset.

“Honestly for me that is the toughest thing,” Kriegmont said. “With me and Casperson (JDHS coach Robert Casperson), I grew up with him being my coach my whole life. I had never met any of these coaches at Montana so it is definitely a different dynamic.”

A veteran player noted that dynamic to Kriegmont.

“He told me it was a business,” Kriegmont said. “It definitely opened my eyes. Division I basketball is a business. The coaches have incentives as much as the players do to win games. That’s really the goal. Sometimes I think they don’t show me quite as much attention because they have so much on their plate. I think just the biggest thing is you have to do it yourself, no one is going to do it for you. The work really comes from within. Most players talk with an assistant coach first when they are recruited and they form a relationship with them but our coaches are approachable. You can talk with whoever.”

“For the first month I was basically just standing there watching the plays trying to figure them out,” Kriegmont said. “I got yelled at a few times but I got them down now.”

The Grizzlies are currently 10-5 overall and 3-1 in the Big Sky Conference. Their latest game was a 74-72 buzzer win over Weber State that was highlighted on ESPN. That stage is what the UM coaches believe Kriegmont will rise to.

“Coop has been a worker both on and off the floor,” UM head coach Travis DeCuire said. “This program has high standards and he has worked hard to achieve them. Freshmen sometimes can have an adjustment phase and Cooper has really worked to be his best.”

“A lot of times freshmen guards struggle with the strength level,” Flores said. “The speed and strength of the game is a lot different at the Division I level compared to high school basketball. So his body, he is able to stand his ground defensively and all those things, because he works so hard to be in such good shape. His physicality is what sticks out the most for sure.”

“I gave him a little bit of crap because I beat him in one-on-one,” Kriegmont said. “So I told him, ‘Alright, I get bragging rights until you beat me.’ We’re cool. For me, I just try to keep my head down and let my game talk.”

Kriegmont is a preferred walk-on player, meaning - he does not have a scholarship. He earned his place on the team through hard work on the court and in the classroom.

Before this season started the Grizzlies held open gym scrimmages and it was obvious Kriegmont belonged there.

“I had back-to-back threes in the first scrimmage I did and I thought that was pretty cool,” Kriegmont said.

He has also noted that the practices have shown he has more work to put in, but he is in the right place to do that.

“I struggle with that sometimes,” he said. “You do something good, you make a basket, you score and it give you a little spark, ‘Alright, maybe I can do this.’ Then sometimes you get locked down or your shot is blocked and it’s ‘Oh geez.’ But there are definitely moments where I am really confident. Right now it’s hard because I just got to school, I’m figuring stuff out, what I really need to work on. I am working on that and now my confidence is really growing. There are 16 guys on the team that can all really play basketball. It is just so competitive. I think what I bring to the team is my work ethic. Especially in the weight room. My work ethic is something that sets me apart and hopefully inspire my teammates to work hard too. I told myself I’m coming here to be a better basketball player. And if I leave here a better basketball player than that’s what I set out to accomplish.”

With one college semester under his belt Kriegmont reflected.

“You can always do stuff better,” he said. “There is always something you can work on. There is always something you can put your time towards to better yourself in one way or another. We really don’t have any time to ourselves and that can be hard on mental health and stuff. Down time is important. You have to find something that can keep your head screwed on, something to keep you in check with reality, and maybe can pull you back if you get a little to far away. I love Juneau, and I think about home and family a lot.” 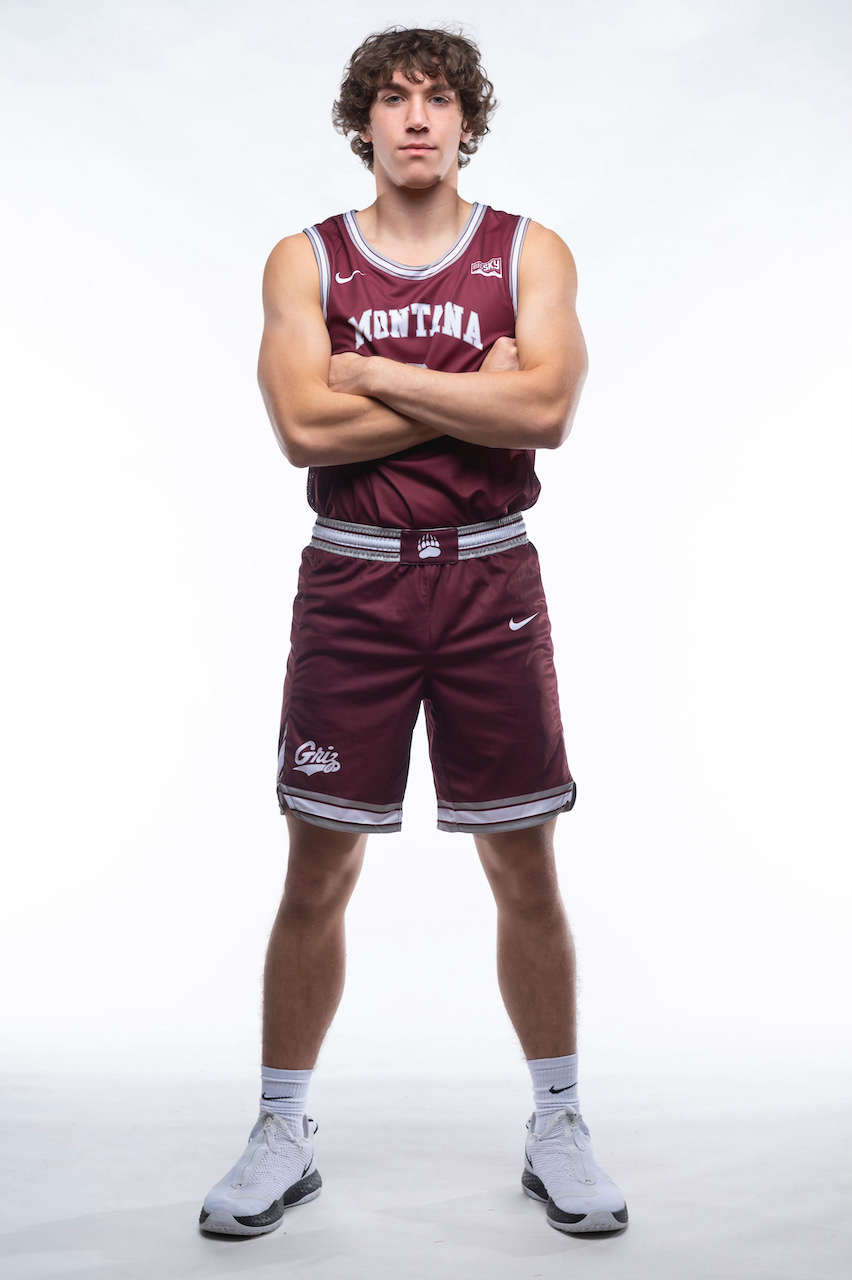 Above - JDHS 2021 graduate Cooper Kriegmont is a freshman on the University of Montana Grizzlies basketball team. (UM Griz photo) 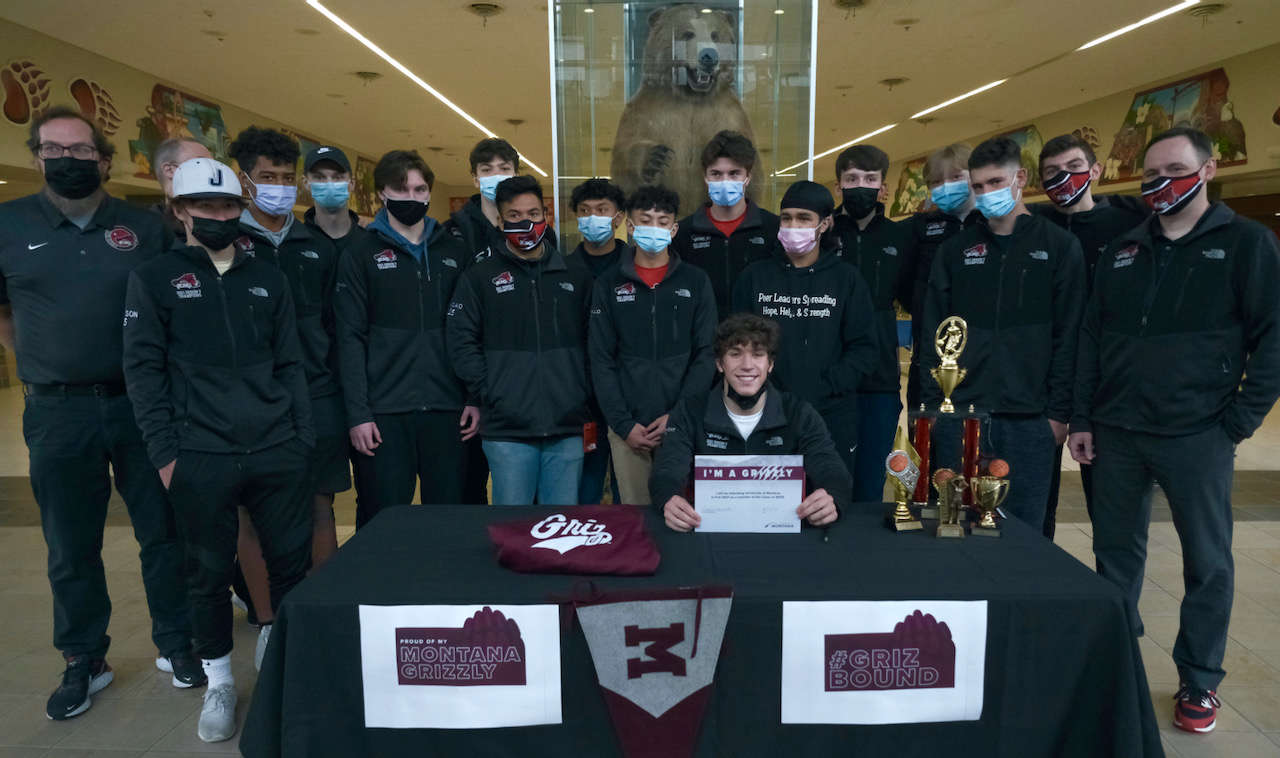 Above - JDHS 2021 graduate Cooper Kriegmont with his Crimson Bears teammates after signing his letter of intent last May to attend and play for the University of Montana Grizzlies basketball team. Below - Kriegmont in action against Thunder Mountain last season. (Klas Stolpe) 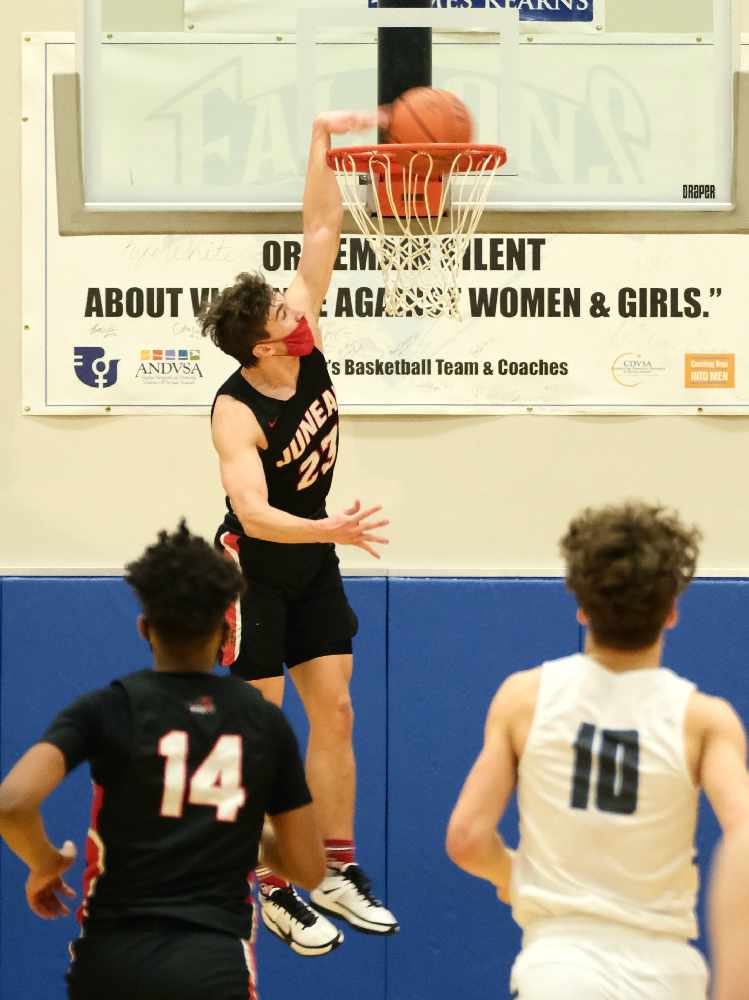