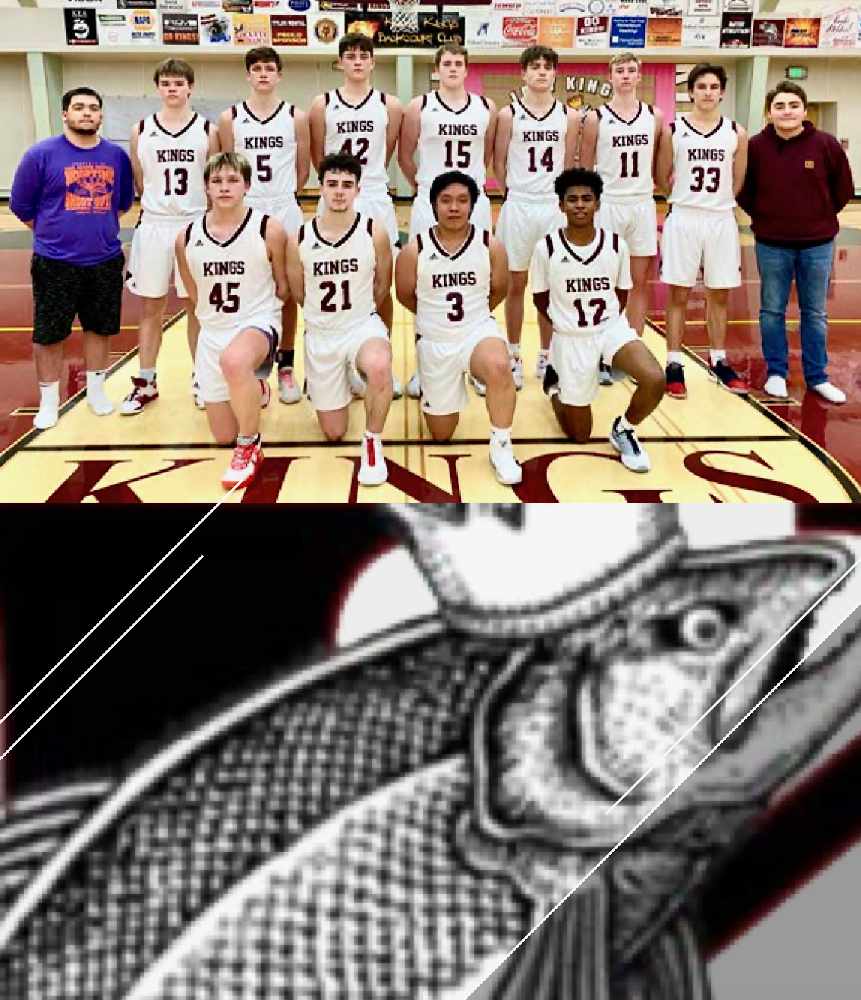 The Ketchikan Kings lost their opening game at the ASAA March Madness Alaska 4A Boys Basketball State Championships on Thursday and play in the consolations bracket Friday. (Photo Courtesy ASAA).

JUNEAU, ALASKA (KINY) - The Ketchikan Kings ran into a hard-nosed Chugiak Mustangs team in their opening game of the 2021 March Madness Alaska 4A Boys Basketball State Championships on Thursday at Palmer High School.

“Our kids have a lot of heart and that was on display,” Ketchikan coach Eric Stockhausen said. “We know what we are. There are times that we are explosive, we do great things, and there are times where we look like we aren’t sure what we are supposed to be doing. We are kind of both right now, but that is attributed to the amount of youth we have.”

The game appeared to be over as Ketchikan trailed 53-32 starting the final eight minutes of action. But the Kings outscored the Mustangs 20-7 in the final quarter. That included a spirited run to close to 11 points, 53-42, with 4:50 left to play.

Chugiak’s first basket of the last period came at the 4:20 mark and Ketchikan put up a spirited, scrappy defense, getting two steals in a one minute span.

Sophomore Clayton Olstad was fouled on a deep shot with 1:16 remaining and hit all three free throws to cut the deficit to five, 55-50.

A steal by Kayhi led to an Olstad follow on his own shot for a 55-52 game with 54 seconds left.

A Chugiak inbounds turnover gave Ketchikan possession but the Kings lost the ball.

Chugiak senior Owen Lewis hit a one-and-one for a 57-52 lead with 31 seconds left and senior teammate Zachary Cole added two more with 21 seconds left. Kayhi missed an open layup with 10 seconds left and Chugiak’s Kellen Beam hit one of two from the free-throw line for the 60-52 final.

“I am very proud of our kids for giving us the chance to be in it at the end,” Stockhausen said. “We had the ball in a one possession game. We just turned it over a little too much, but we demonstrated that ‘A’ we don’t quit and ‘B’ we’ve got skilled, talented kids that once we figure it out and execute what we are supposed to do we are going to be a lot of fun to watch.”

Ketchikan kept the score tight early. Trailing 10-6 with 3:50 remaining in the first period, senior Kylar Charles inbounded the ball with a pass off the back of a Chugiak defender, retrieved the ball and scored to cut the Kings deficit to two.

Chugiak responded with a pair of buckets for a 14-8 advantage at the 2:36 mark of the first period and pushed the lead to 18-10 with a lay up at the buzzer to end the first quarter.

Kings junior Josh Rhoads hit a three-point shot to open the second quarter, cutting the lead to five, 18-13, but Chugiak responded with a 11-0 run and would go into halftime leading 38-21.

Of importance to coach Eric Stockhausen and the Kings was the placement of a gold jersey with the number 23 on it that sat on the bench between coaches. The jersey belonged to a player Stockhausen coached on the Alaskan AAU BluGolds traveling summer league team. That player was Juneau-Douglas senior Cooper Kriegmont.

“I told him that was something I wanted to do for him,” Stockhausen said. “So I put his jersey on the bench and had it out the whole game.”

Stockhausen said the team wanted to show respect to Kriegmont and the Region V champion Crimson Bears, whose state title hopes were dashed by their schools COVID travel policy. The policy says if a region hosting the tournament was in a red, or high-alert, status, as designated by the state health department, travel would not be approved. The health department, in a release Monday, showed the Matanuska-Susitna Region, where the state tourney is being held, was among the areas of the state considered at high-alert status; Anchorage was in that category, too. Juneau was listed in the low-alert category.

“I don’t think anyone is confused about who won regions,” he said. “We are just thankful for the opportunities, and it is sad when kids don’t get to do those things, but it is also the real world where policies are made and people follow them.”

“The yellow jersey was from the AAU program that I had the opportunity to work with Cooper and other kids from around the state,” he said. “And after the events last week with Cooper I just said ‘I would like you to be there with me at least in spirit’ and so I put the jersey he wore for BluGolds between coach Simons (Darryl Simons) and I, just out of respect for him and the great career and season that he and his teammates had.”

Chugiak advances to a semifinal at 8 p.m. Friday at Palmer High School. Ketchikan plays in a consolation game at noon Friday at Wasilla High School.