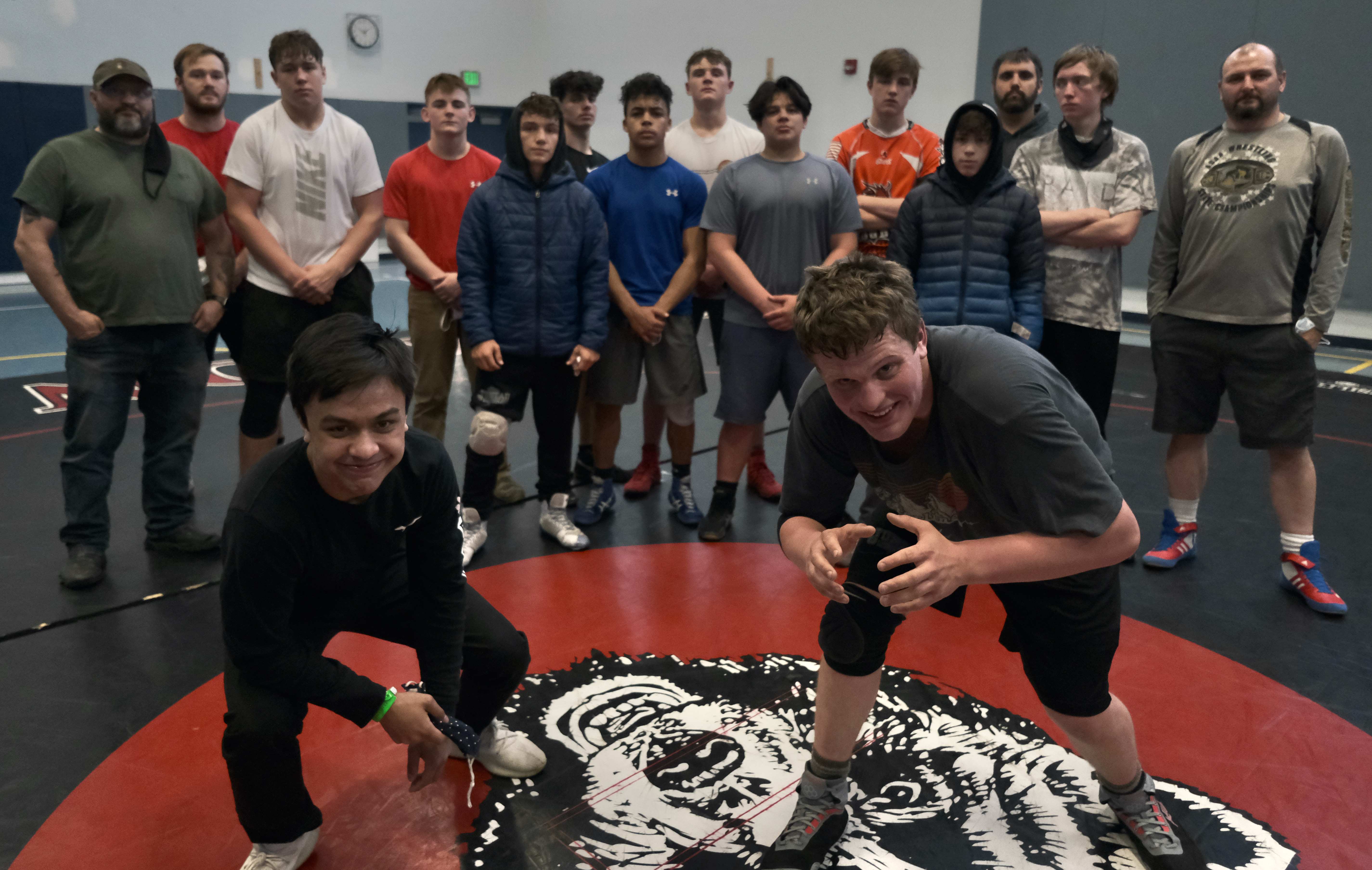 Juneau, Alaska (KINY) - When the coronavirus was accidentally passed through a wrestling tournament in Ketchikan a little over a month ago Thunder Mountain High School’s Juneau wrestling team was on the brink of becoming a top Southeast team and a contender for a region title and a state championship.

Although no cases followed them back to the Capital City, enough traveled to other communities to shut down competition on the mats for roughly four weeks, resulting in a grind-it-out approach among the team that tested their resolve. Not only had they lost last season to the pandemic, now this season had been tarnished as the region tournament was canceled and grapplers went through weeks of practices without competitions in hopes of attending this weekend's state championships in Anchorage.

“I have been telling them to control what they can because obviously the pandemic has caused us to miss tournaments, matches and competitions,” head coach Josh Houston said. “So they have made sure they are staying up on their grades, chores at home and staying responsible and doing things that they need to do so we don’t have any other reasons to miss anything. Just trying to keep them focused. We try to break it up now and then and have some fun because it is a long grind practicing this many weeks without a competition.”

Houston said it was tough to keep the teams attention when all their focus was just on practice.

“It is tough when they don’t get to go do the fun part,” Houston said. “Wrestling is always fun until you are just grinding away for several weeks.”

Juneau’s top two chances for a state placing rest with seniors Nate Houston at 125 pounds and Camden Erickson at 215 pounds.

Houston will be wrestling for College of Northern Idaho next year, majoring in a medical field. His favorite food is pizza, favorite book “The Green Mile” and favorite movie “Vison Quest.”

It has been over a month since either has competed.

“Don’t take anything for granted,” senior Nate Houston said. “It can all be taken away at any moment. Work with what you got and try your best.”

Erickson agreed with his teammate.

“Perseverance was definitely necessary to get through this season and not taking anything for granted,” Erickson said. “I don’t think anyone had any idea last year what was going to happen but we have to make the best of it and finish strong.”

Nate Houston commented on the grind.

“Just the thought of it being my last chance to do well at state and make my goals come true,” he said. “It is just something I have dreamed of since I first starting wrestling when I was four years old.”

Erickson said he needed a lot of perseverance.

“It is something they have been preaching since we were little,” Erickson said. “Definitely a necessary thing to have in wrestling. And just keeping a positive mental state about it. Even if you don’t know if you are going to have a state title or a state championship, you just have to keep your head down and hope for the best and see how it plays out.”

Coach Josh Houston also said that the various team’s coaches used common sense when selecting the state qualifiers, from knowing the kids and coaching them over the years through various club and high school seasons when they selected state participants.

“Just logic and stats,” coach Houston said. “After seeing these kids for years we kind of have an idea. And honestly, for the most part with the numbers being so low, there were no big conflicts between selecting weight classes between the two teams.”

The problem was keeping the spirits of the grapplers positive while they returned day after day to practice.

“Their attitudes have gone up and down with what they are thinking at the time about whether we are traveling or not,” coach Houston said. “When they feel like they are not going to travel then the moral definitely goes down and it gets a little sullen in here. But when it starts looking like we are going to go somewhere and compete, and they believe it, they pick up the intensity and things get a little better.”

Now that a travel date is confirmed it just happens to be the last matches of the season.

“It is horrible,” Houston said. “When you go to meets you have more motivation to come back into the practice room and work on the things you need to do to get better at the next meet. They are finally going to feel that and then it is all going to be over. You need to wrestle people you haven’t seen before to experience new situations, not the same teammate over and over. You need that competition to figure out what you need to work on to expand your skill set.”

The state Division I wrestling championships begin Friday at Anchorage’s Bartlett High School and the DII and Girls state tournaments are at Chugiak High School.

Southeast DII and Girls qualified for the state tournament at Chugiak High School include: