Juneau's Hilary Lindh is shown posting the fastest women's time in the 2014 town downhill at Eaglecrest Ski Area. The event is now named after her father Craig Lindh. (Klas Stolpe)

WHITEFISH, Mont. (AP) — Forward, fast and strong. Those were the only three words Olympic downhill skiing silver medalist Hilary Lindh said to herself as she stood in the starting gate at the 1997 World Championships in Sestriere, Italy. This mantra evolved throughout her career to keep all distractions at bay as she mentally prepared for each race. By repeating those three words in the hours leading up to race time, she focused on positive thoughts while filtering out distractions and worries about winning.

“That’s the death sentence in sports,” Lindh said. “Is thinking, ‘What do you need to do to have that result?’”

Lindh won gold at that race in Italy more than two decades ago, and she remembers that pivotal moment in her career. She crossed the finish line in first place, but before that, she knew she had done everything she could to get there, and her results didn’t matter. Even though she had already participated in three Olympics, won a silver medal at the 1992 Winter Olympics in Albertville, France, had three World Cup victories and a World Championship bronze medal, all in downhill, she remembers a long journey getting to her victory in Italy after some disappointing results at the start of the season.

Her coach at the time, Herwig Demschar, who hailed from Austria and coached her on the U.S. Ski Team from 1994 to 1997, says it was one of the most memorable and satisfying moments of his career, too.

Although Lindh didn’t know it at the time, that was the last season of her career. The season before, Demschar says she wasn’t sure if she wanted to continue racing. Thoughts of retiring had distracted her, so she chose not to think about retirement the following winter. She wasn’t skiing to her full potential, which Demschar blamed on a new ski boot model that didn’t mesh well with her. After she switched back to her old boots, he says she got better.

“I thought at that time, she had not given all of what she was capable,” Demschar says.

Lindh began making significant progress toward the end of her final season, finishing third at the World Cup in Switzerland and making a big comeback at the World Championship in Italy. But by the end of the season, Lindh was ready to move on and at 27, she started the next chapter in her life.

“When I was racing, I (thought), pretty soon, I’ll have to get a real job,” Lindh says.

Lindh grew up skiing at Eaglecrest Ski Area in Juneau, Alaska, a city-owned ski hill that started in the 1970s with help from her father, who was from Missoula and worked for the U.S. Forest Service at the time as a regional snow ranger. The coastal ski area in the southeast part of the state often sees winter rain (the summit’s elevation is 2,750 feet above sea level).

Lindh’s father moved to Alaska in the 1960s where he met her mother, raised a family and spent the winters skiing at Eaglecrest, introducing Lindh to ski racing.

By the time she was a teenager, Lindh started to excel at racing and she transferred to Romark Ski Academy in Salt Lake City during her freshman year and started traveling with the national team at age 15. After winning the U.S. National Champion and World Junior Champion in downhill at age 16, she started racing in the World Cup circuit full-time and in the following 12 years, she raced in three Olympics and countless World Championship and World Cup races, specializing in the downhill and super-G disciplines where she’s been clocked skiing more than 80 miles per hour.

Lindh had established herself as a speed skier, but she continued racing in the slalom and giant slalom disciplines until her early 20s before realizing she needed to focus on speed events.

“I was always a speed skier,” Lindh says. “It’s fun and I was good at it. There’s a lot of finesse in it and you can’t make abrupt movements or overreact if you’re scared. Car racing is similar, you just have to run it out and if you correct too quickly, you’ll run into trouble. I think I was suited to not panicking and just going with it.”

In 1988, at the age of 18, Lindh headed to Calgary for her first Olympics. It was an eye-opening experience. She wasn’t accustomed to the media attention at the Winter Games in comparison to the World Cup races she was used to. She didn’t make it onto any podiums that year, but she knew what to expect at the following Olympics in Albertville, France. Lindh felt less pressure heading to France in 1992 and she shifted her perspective, focusing on doing her best and not worrying about her results or bringing home a gold medal. With four more years of experience and confidence, she took won a silver medal in Albertville.

Two years later, she competed in her final Olympics in Lillehammer, Norway, the year organizers offset the winter and summer games, and she continued racing for three more years before retiring in 1997.

During her last few years on the U.S. Ski Team, Demschar says she was one of his favorite athletes to coach. Lindh had a laidback attitude toward skiing, which he believes made her successful.

“If you look at her results at the time, she was as successful as Picabo Street,” Demschar says. “But she was very quiet and in the background and very humble. That’s the reason I always liked her. She was not in the limelight, and she enjoyed success on her own and in her own way.”

But by her twelfth season on the U.S. Ski Team, Lindh was tired. She knew what it took to be on top, and she didn’t have the drive anymore. She had already accomplished what she wanted to.

“I was just over it,” Lindh said. “I felt like I should get on with school and getting a job. I thought that was important at the time.”

After graduating with an undergraduate degree in biology at the University of Utah and a master’s degree in conservation from the University of British Columbia, Lindh worked as an environmental consultant in both Canada and Juneau before moving to Whitefish in 2016 with her husband and daughter.

“We came here for the skiing,” Lindh said.

While Lindh says her job with the city was a great place to work, she recently resigned after four years when the FVSEF board offered her a full-time position as the program’s executive director and head coach.

“It’s a hard role to fill and knowing that she has a daughter in the program and she’s already tied in as an Olympian, she’s almost overqualified for the position,” FVSEF Board Director Cari Klepper says. “To have someone with this level of experience is just a perfect fit.”

But it wasn’t a simple decision for Lindh. Her job as a city planner had benefits and was far more stable than a position with FVSEF. And while she had been coaching on and off for the last 25 years, Lindh had never coached full-time.

Demschar laughed when Lindh told him about her new job. But he says he couldn’t think of a better candidate for the position.

“She knows the pipeline,” he says. “The element of her ski racing at the highest ranks … She understands what it takes and she’s a good human being and cares about people.”

Founded in 1973, FVSEF offers both competitive ski race coaching and general skill development for kids ages 6 through high school along with a separate masters group for adults in their 60s and 70s. With 170 kids at FVSEF, the majority of those participants are enrolled in the All Mountain Rangers program, which focuses on foundational skiing skills. From there, skiers can build on that base and transition to the Development team, which has about 35 participants, for kids ages 8 to 14 and involves more race training.

But Lindh says it’s a struggle to retain athletes once they become teenagers, some getting distracted with other activities or deciding they want to ski with their friends instead of the program as it becomes more committal and intense.

In the competitive U14, U16 and U19 programs, where skiers ages 12 through 18 travel around Montana and parts of Wyoming and South Dakota in the United States Ski and Snowboard (USSA) Northern Division, Lindh says there are fewer participants, and they only have skiers under 16 this season after some of the older athletes aged out of the program.

“We do lose some every year as kids get older because the programs are more expensive and time-consuming,” Lindh said. “But one of our goals is to retain a higher percentage of kids as they get older.”

Lindh, now 52, is working on retaining those athletes. She says in the past, many participants already had a history of ski racing in their families and had parents who were more familiar with the sport, which led to more interest. But with a flock of new residents in the valley, many with minimal skiing knowledge, she’s working to educate new families.

“I think we’re evolving into an organization that teaches new families what ski racing is,” Lindh says. “That’s a result of new people coming into town who want to take advantage of what’s great about this place, and skiing is one of those things. Part of that is looking at how to bring families into this community of skiing, teach them about the traditions and the history of the sport and creating that sense of community.”

“We really focus on sportsmanship in ski racing and in all sports,” Lindh says. “It’s really important to focus on the journey and how you are getting toward your goals rather than the destination and teaching that perspective. This is a lifelong sport and you won’t ever reach perfection but you can strive to keep improving and I think those are really valuable skills.”

Klepper says Lindh has been a huge inspiration to the kids on the team and having an Olympian for a coach allows her daughter to dream big.

“It’s so inspirational to her because you never think you could make it to the Olympics,” Klepper says. “It makes their dreams attainable because we have an Olympian as their head coach.” 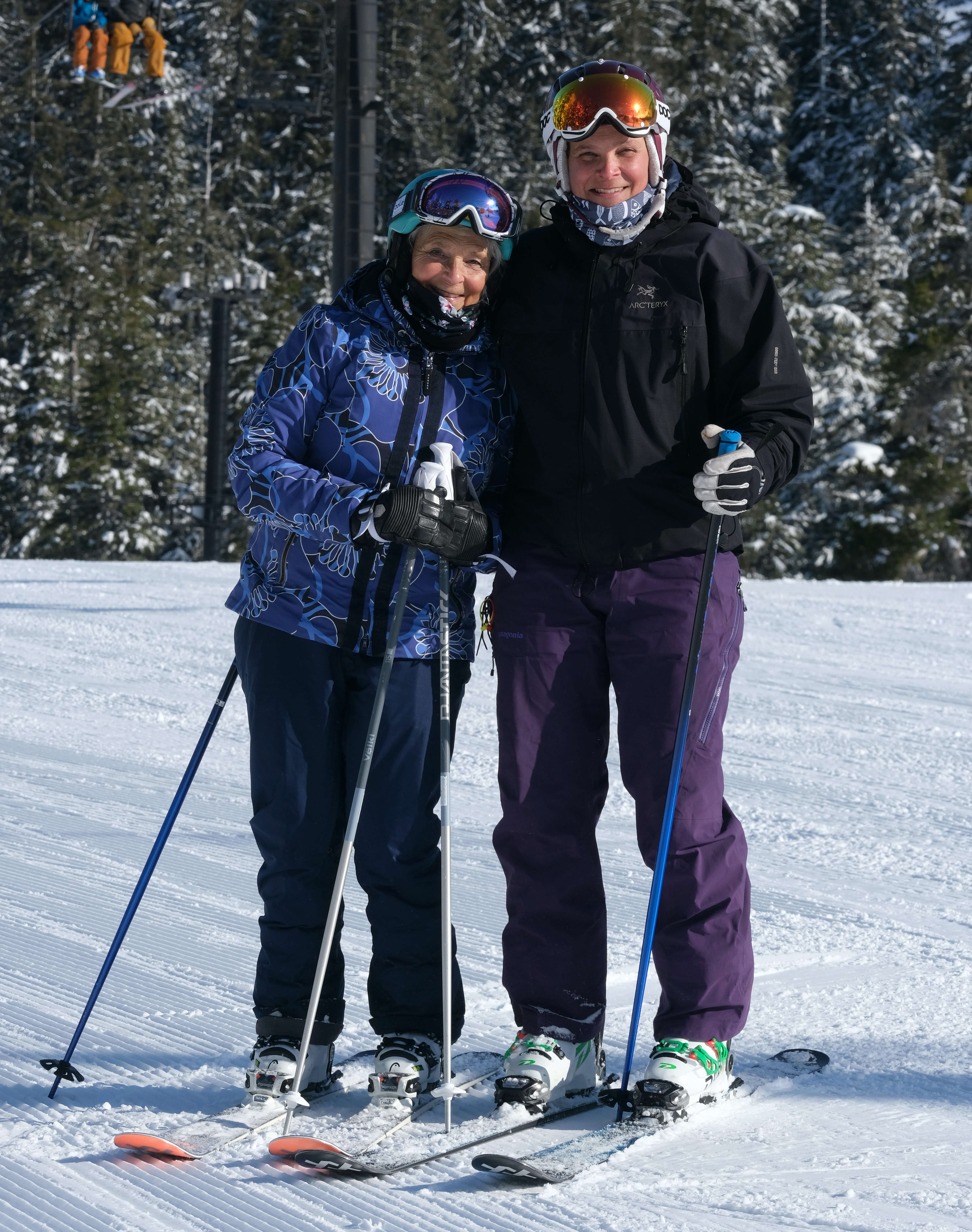 Above - Barbara and Hilary Lindh prior to the start of the 2021 Craig Lindh Memorial Town Downhill. Below - Hilary Lindh tests the giant slalom course on her namesake, Upper Hilarys, during a January 2012 Juneau Ski Club race at Eaglecrest Ski Area. (Klas Stolpe) 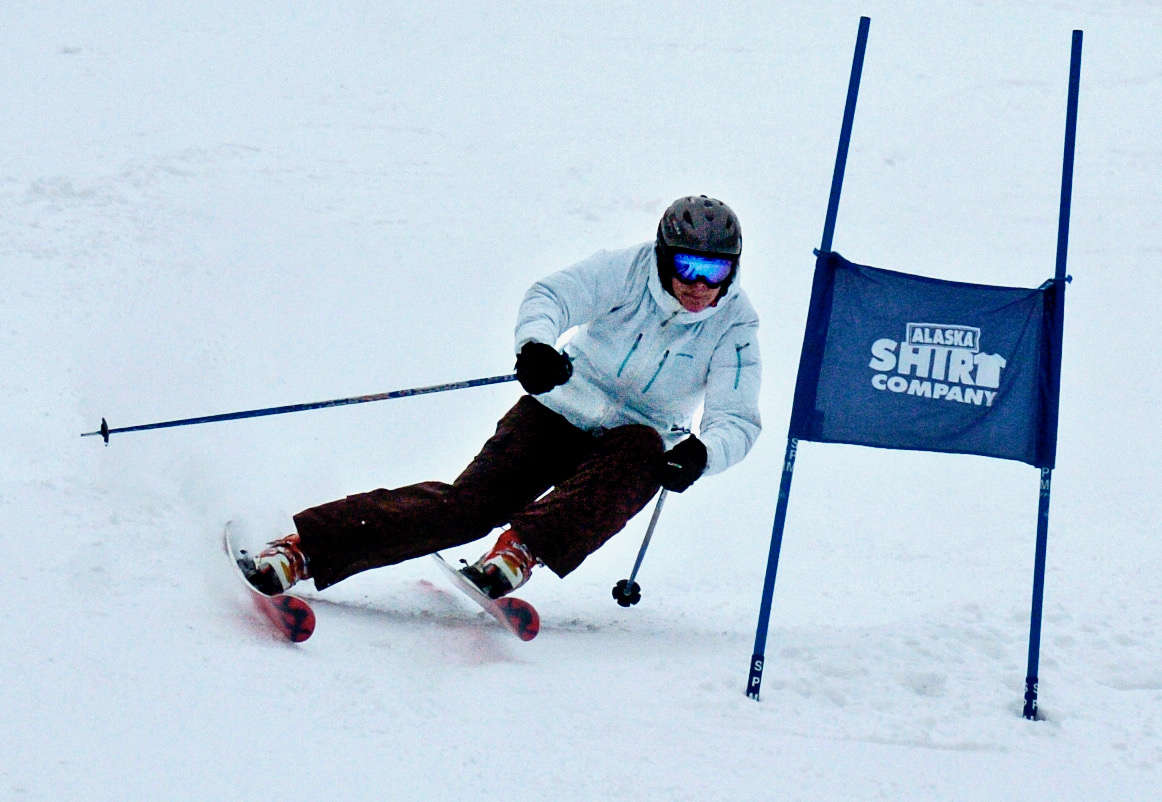