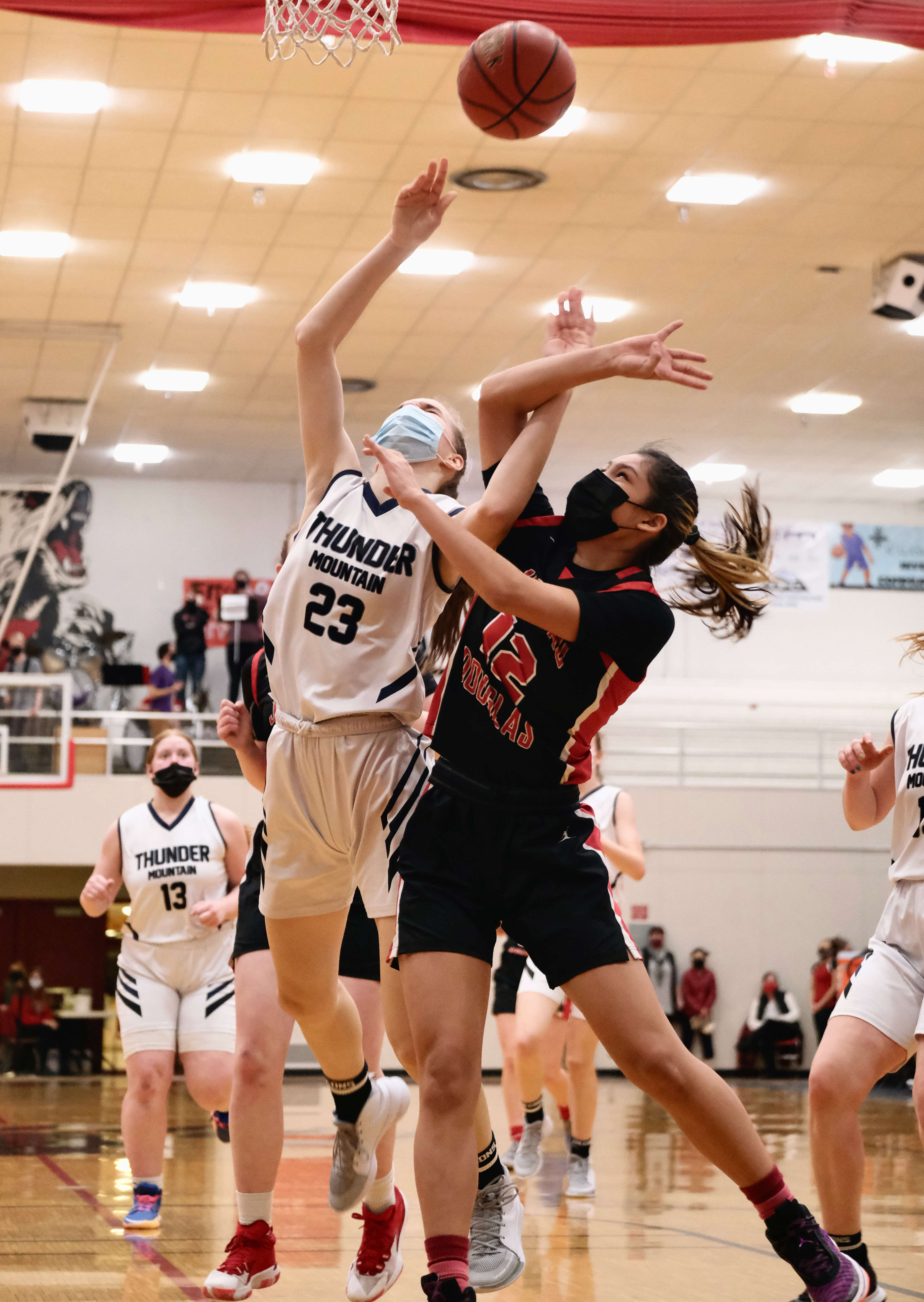 TMHS freshman Cailynn Baxter (23) and JDHS senior Trinity Jackson (12) battle for a rebound during the Capital City Classic Dec. 28. The teams were unable to practice this week due to weather. (Klas Stolpe)

“We didn’t have any virtual meetings,” JDHS coach Steve Potter said. “Since we were day to day the plan was always for tomorrow to be at practice.”

The JDHS girls play at Mt. Edgecumbe on Friday and Saturday. They had been scheduled for just one game on Thursday against the Lady Braves and then playing at Sitka on the weekend but the Lady Wolves returned from a Nome tournament with possible COVID contacts so canceled their games.

“No idea what to expect from them, especially this soon after the break,” Potter said of Mt. Edgecumbe. “I really think playing on that floor is a great experience for anyone. This will give us a chance to see if we’ve improved since last weekend, but without practice it will reflect mental and conceptual improvement, or not, of what we are trying to do.”

The Thunder Mountain boys and girls are playing in the Palmer Elks Showdown hosted by the Palmer High School Moose.

The Falcons boys found some court time in the West Anchorage gym on Wednesday as Palmer was cleaning up their facilities due to high winds and snow. The boys will face Palmer on Thursday, West Valley on Friday and Nome on Saturday. The Falcons have lost to Nome 61-52 three games ago.

“The competition is going to be tough this week,” Falcons’ boys assistant coach Matt Seymour said. Seymour is filling in for head coach John Blasco this weekend. “We have had no practices since Ketchikan because of the school closures so we will have to be both mentally and physically tough as we have three teams who all have state championship aspirations. So we will need to be as sharp as possible on both ends of the floor this week.”

The Falcons tried to weather the storm off the court.

“At home workouts and the racket club to get some shots up is really all we could do,” Seymour said. “And gave them some films to watch. All we can hope for is the rest we got from these two days helped us rather than hurt us.”

The Falcons girls will face Palmer, West Valley and East in the tournament. The Falcons used some virtual meetings to prepare as well.

“We scouted and did a few individual chats,” Head coach Andy Lee said. “We are facing three teams representing the other three conferences. All qualified for state last year. All with exceptional size and athletic. Palmer is physical and confident with most of their players returning from last season. All three will try to overpower us. We need to use our depth and play our pace.”

The JDHS boys used the extra days for even more rest and were encouraged to watch game film. They did not play last weekend and do not hit the game court until Jan. 20-22 at the Alaska Airlines Classic against East Anchorage. Other teams will include West Anchorage, Lathrop, Dimond, St. Joseph (CA), Colony and ThurnderRidge (CO).