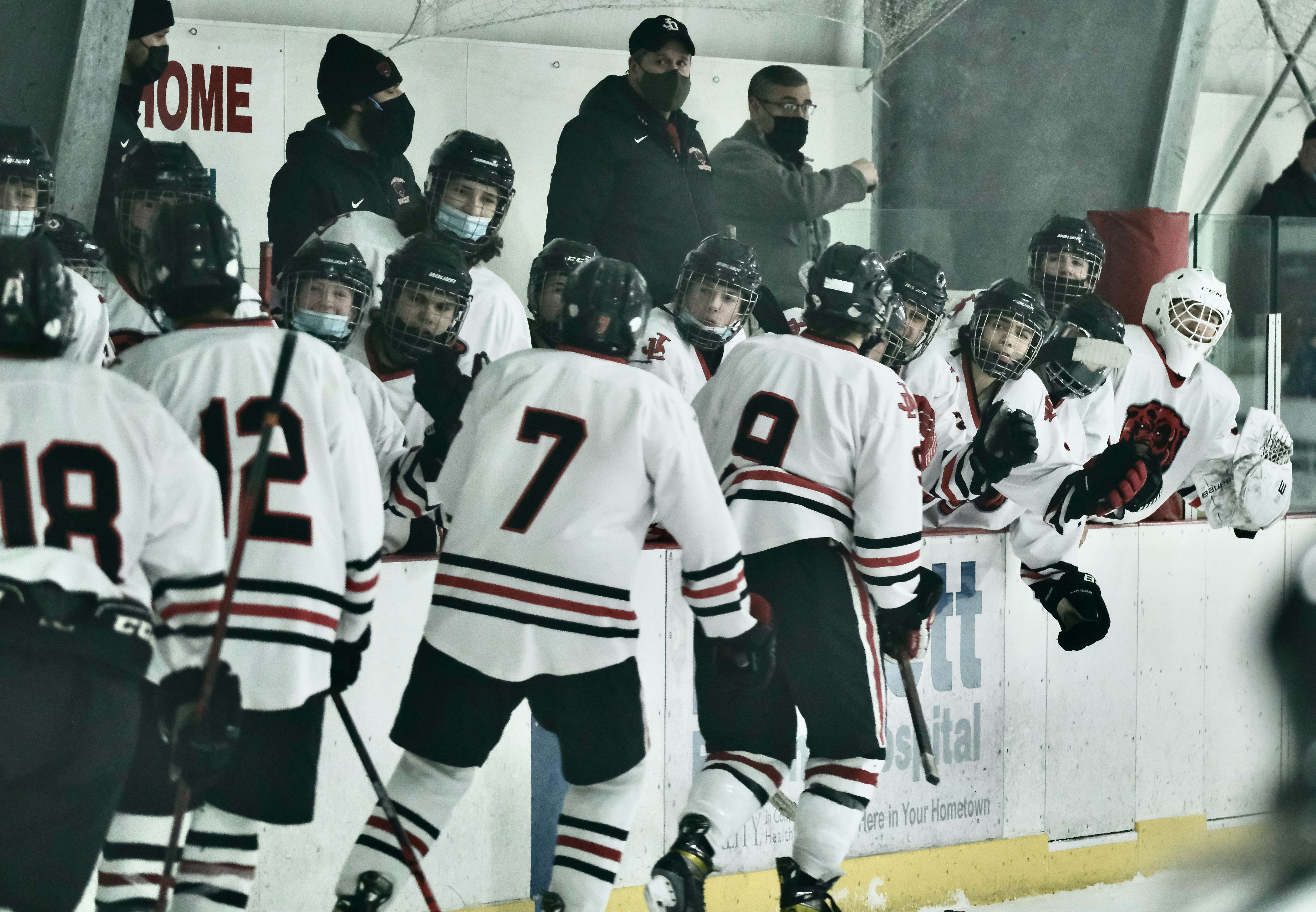 Juneau, Alaska (KINY) - The Juneau-Douglas High School: Yadaa.at Kalé Crimson Bears hockey team will be playing their final home games of the season at 7:30 p.m. Friday and 3:30 p.m. Saturday at Treadwell Arena. Crimson Bears senior players and their parents will be honored at 2:30 p.m. Saturday on the arena ice.

“It’s going to be a good weekend of hockey and we’re ready to cap off these kids' home careers at the Treadwell,” Juneau-Douglas coach Luke Adams said. “Houston is a good team. They are the top team in our conference, I believe, right now. They have really made a turn around and we know they are going to push us harder than anybody did. We’ve had a good week of practice. We’re ready to step up and I think it is going to be a good series.”

Following are remarks compiled by the Crimson Bears coaching staff on their senior team members:

Joey Meier #6 - TENACITY - Joey has made a big impact in his career with JDHS Hockey. His aggressive style of play and tremendous work ethic are on display every shift. This season he has added the speed and hustle that our team needs to disrupt the play of our opponents.
Finn Shibler #7- PASSION - Assistant Captain - Anyone who knows Fin knows how much he loves the game of hockey. His puck skills often leave us in awe as we have watched him grow and play in his career. This year as an assistant captain, Finn has stepped to the plate and set an example for other players in our program to look up to.
Jack Cisney #32- CONSISTENT - Jack is such a great guy. He brings a great attitude each day to the rink and treats others with kindness and respect. As coaches, it is always a joy to work with Jack. He is always striving to learn new things and continue to develop his game.
Sam Bovitz #9- HUMBLE - Captain - Sam has been a four-year varsity player for the program. He has been a leader on and off the ice. His knowledge of the game and his ability to turn that knowledge into action with his teammates has led to success.
Illya Wallace #13- INDUSTRIOUS - Illya always brings a lot of smiles to the team. His keen sense of humor is one of a kind. This season Illya has also stepped things up as well and contributes in many ways. When he hits the ice he has proven to have one of the quickest wicked shots on the team and has continued to progress this season as well.
Kyla Bentz #27- RESILIENT - Kyla is one of those players who we can look at in awe because of her advancement as a player between her freshman year and now as a senior. She has an outstanding head for the game and loves to compete.
Cody Kesselring #22- FOCUSED - We are so happy to see the dedication and hard work of Cody over his hockey experience. He has been dedicated to off-season training, which has helped him compete at the varsity level. His sense of humor keeps us smiling and shaking our heads both on our home ice and on the road.
Dylan Murdoch #18- ANCHOR - Assistant Captain - Dylan is a utility player who has been willing to fill any role needed without hesitation. He loves to play the game and doesn't hesitate to use his size and strength when things get rough. He is a great guy that is always willing to give everything he has to get the job done.
Andre Peirovi #12- DRIVEN - Andre’s competitive nature is evident every time he takes the ice. His speed and skill set him apart from the competition and when a big goal is needed, Andre is the guy who we can count on to make it happen. He is a passionate player who loves to compete each day and has been a joy to coach.
Cody Roomsburg #37- ENERGY - Cody is one of those players that we all love having around. Like many others, he is always willing to step up to help the team when anything is needed and is extremely hard working. If a task needs to get done, Cody is one of those players that takes the initiative and often leads the way.
Arvid Bush #33- PERCEPTIVE - Arvid’s season was cut short to an injury, but his journey as part of our program has been really impressive to watch. Before his injury, Arvid made big strides in the early season becoming a strong player with a high compete level. He has always been up for a challenge and loves a good debate with coaches and teammates alike.
Colton Johns #2- DEDICATED - Colton has worked his way through the program starting off as a JV player who had to do the extra work to become the player he is today. As a senior, Colton has become a key part of our defensemen crew and plays in all situations. Colton brings positive contagious energy to our team day in and out.