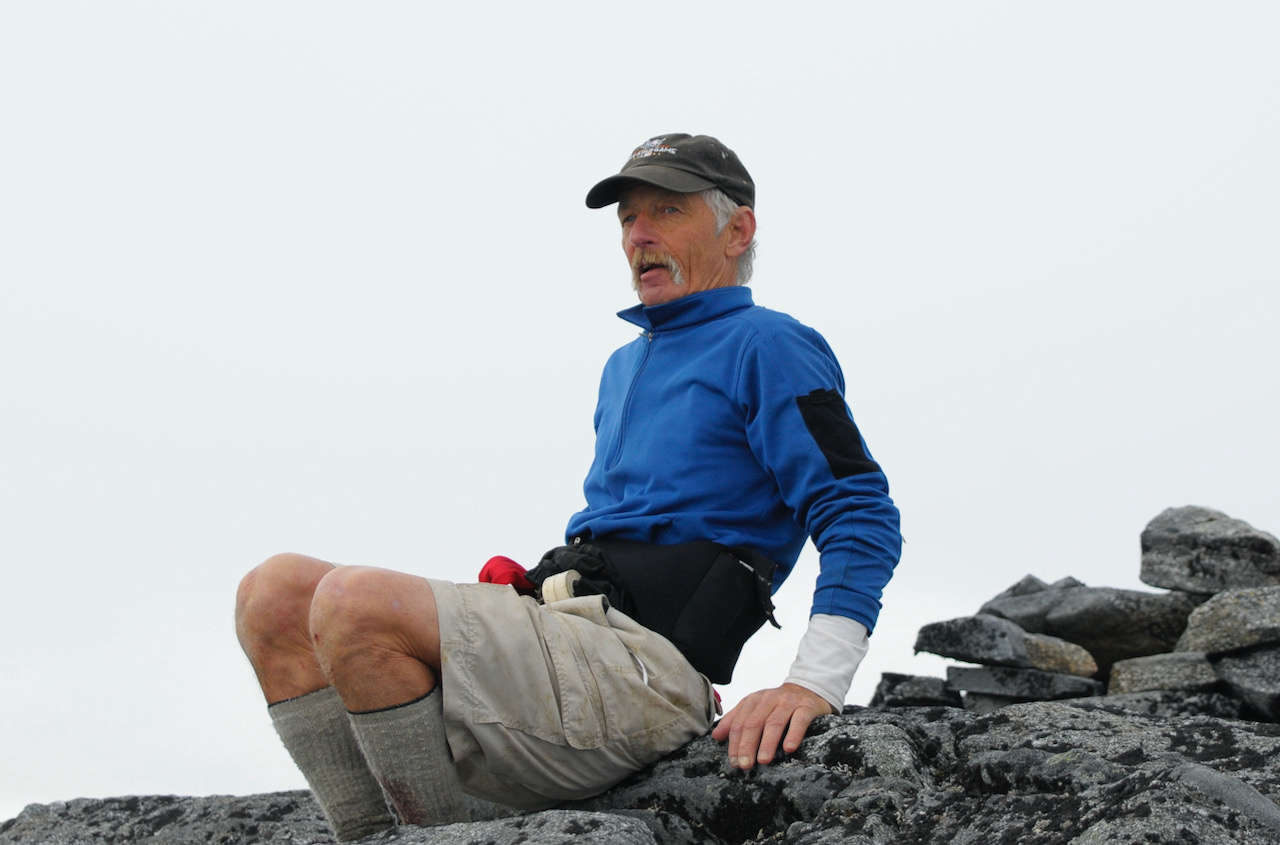 Glenn Frick on top of a mountain on an outing in 2011. (Klas Stolpe)

Juneau, Alaska (KINY) - Quirky. Fast. Crazy. Fun. Surprising. These are just a few of the adjectives that describe the Glenn Frick Memorial Fourth of July Mile race. They also speak to the race namesake's love of outdoor adventure.

“It is quirky,” Juneau-Douglas High School: Yadaa.at Kalé co-coach Merry Ellefson said. “It’s the fastest mile, probably, in Alaska, maybe the world… but what we love about the Glenn Frick Mile is it honors our buddy Glenn, who was a mentor to so many of us. We wouldn’t be on these trails, we wouldn’t be doing the crazy and fun things we do or driving ourselves to be better competitors…”

The Glenn Frick Memorial Mile is at 10:30 a.m., Monday, the Fourth of July. To register go to southeastroadrunners.org or stop in the parking lot behind the JRC/Alaska Club Parking lot a half hour before race time. The starting line before the race begins at Egan Drive near Foodland. Race fee is a donation of the participant's choice.

Glenn Frick was born Oct. 27, 1938 in Colebrook, New Hampshire. He died on March 7, 2014, at Virginia Mason Hospital in Seattle shortly after being diagnosed with lung cancer. He was 75, and had just run the Juneau mountains he loved with friends a week before.

Above - Klas Stolpe and Glenn Frick on top of a mountain during an epic running adventure. (Klas Stolpe)

(Sports Editors note: Following is a column I wrote after my first outing with Glenn, a friend to all outdoor types in Juneau and beyond.)

No Man Left Behind

This was said with roughly two hours left in a planned run in the mountains. I had just looked at one last climb up toward the end of the Juneau Ridge.

“No way I can scramble up one more mountain. Go on ahead,” I said.

I knew the way home. If the cramps didn’t subside, I could crawl the final miles.

But slowly, every step began to feel like I could survive this “slow and casual” outing to celebrate ultra-marathoner Geoff Roes’ last month in Juneau. So, we continued on.

Flash back to 12 hours earlier.

I arrived at Basin Road at 8 a.m. and parked near the Mount Roberts trailhead. Frick was already there, doing what Frick does: calisthenics, hopping up and down, bouncing off of trees, etc.

John Bursell drove up next. He parked and began an arduous insertion of various supplemental foods into various pockets of clothing.

Geoff Roes arrived next, not by automobile or machine transport, by just running around a corner. He spread a large map out on the hood of John’s car.

His finger points to an area that takes me, via map measurements, roughly four inches to retrace back to Juneau. This equated to a run of nearly 30 miles.

“I looked at this from atop (Mount) Olds and always thought it would be fun to run,” Roes said.

There is a saying: One man’s fun run is another man’s nightmare.

The group told me this would be four to six hours of slow scrambles. It had become obvious that the introduction of a map meant we were looking to, at the very least, double that number.

“Don’t worry, Klas,” Bursell said. “We won’t leave you behind. You have the camera.”

I noted the advantages of the crew I was running with: Roes, one of the top ultra-marathoners in the nation, Frick, nicknamed “the mountain goat” due to his time and experience in the mountains of the area and Bursell, an acclaimed triathlete and a bone-and-joint doctor. Then there was me: a skinny and scrawny guy with two left feet and an oversized camera bag.

At the end of the Granite Creek Trail, we summited through a pass and scaled Mount Olds. I was ready to return, but views of the Tongass National Forest, as it dipped its weary appendages into   Taku Inlet to the east and various peaks and the horizon to the north, enticed me to continue.

Moving along a ridge we could see Gold Fork flowing beneath us into the lengthy Carlson Creek.

It soon became apparent there was no ridge that would connect us to Annex Ridge, where we needed to go. So, we began to bushwhack down toward Carlson. Salmonberries became not only sustenance but also a distraction.

Countless devil’s club plants were tearing at our flesh. It’s here I should note that we all were wearing shorts and half sleeves.

The weather forecast that day was for sun. Each of us carried one long-sleeved jacket tucked somewhere. I was the only one with a spare pair of socks.

It takes skill to bushwhack down a ridge. The expertise of my three companions proved invaluable.

We followed “bear burrows” in thick brush until they ended in stream runoffs.

We traced stream runoffs through overgrown alder until they ended in waterfalls.

We tiptoed around falls until the dense thorny brush reappeared and Frick bellowed, “This is how to descend” and began somersaulting and rolling downward.

The icy coolness of the glacial-fed waters of Carlson and its tributaries was a soothing relief, albeit for only 10 seconds. Then the painful numbness set back in as we moved, sometimes waist deep, through the water and past a beaver hut onto a middle island frequented by bears.

The Carlson is known to be a corridor that provides cover for wolves and wolverines that travel long distances to find prey. It is a safer option for animals than the Juneau Icefield when moving from Taku Inlet, about 12 miles south of downtown Juneau, to Berners Bay, about 35 miles north.

Bear, moose and wolves travel the Carlson Creek Valley, a major watershed that begins behind Salmon Creek Dam and cuts through to Sunny Cove on Taku Inlet.

We heard a wolf howl. And we entered another numbing wade across Carlson onto the base of the Annex Mountain ridge.

It’s here we began up a rocky scree slide, ascended onto snow and ice, and finally topped out, 3,000 feet later, on the Annex.

The world opened up.

I was always the last of the group to reach any ridge and mountaintop. There were always three smiles to greet me as their hands gestured to the various paths taken, historical notations and to the trail ahead.

“Is everyone good?” Roes said at each stop. “Everyone eating enough?”

And someone else would say, “Klas, take this, eat this, drink this.”

Roes said he consumes over 7,000 calories on a “stroll” like this. At one point he pulled out a piece of pizza. The majority of our sustenance came from GU and similar energy gels, bars and nuts, berries and water.

Roes and Bursell carried GPS watches that plotted our steps and the calories consumed. They also showed a map of the area. Frick compared their calculations with his method of wetting one finger and placing his hand in the air to target wind direction and the path of the sun.

At some point the views became too much to fully comprehend. Annex Lake, Glory Lake, Twin Glacier Lake, Taku Glacier, Norris Glacier and the Dead Branch, and Split Thumb. They seemed to all blend together.

I felt like I was farther from home than when I travel for days by plane or boat.

“See that peak,” Roes said, pointing west back toward a tiny bump near Juneau. “That is Observation Peak.”

I had seen Observation Peak before, but from miles away … miles away on the other side, the side typically seen by climbers, hikers and fair-weather mountaineers.

“Don’t worry,” Frick said again. “No man is left behind.”

Frick and I seemed to always be the rear guard; I was more rear than he. Milky Way candy bars, Snickers, almonds and some type of consumable gel seemingly made for children were all awaiting me at each stop.

My only real statement was, “I am not a drinker, but a cold beer sounds awfully good right now.”

Far past the midpoint of the run, Roes and Bursell scampered up a rocky outcropping. Frick followed and I scrambled along. I found it easier, mentally, to scale the rocks alongside the snowfields while they preferred the snow. For me, it was mentally exhausting to consider that one slip could send me skiing towards an amusement park-style infinity fall, whereas the rocks provided an abrupt cushion to my stumble.

Later I noted that a hat and sunglasses would have been nice.

From Split Thumb, it was a tour past Mattin Peak, Observation Creek and across to Salmon Ridge.

I pointed to a reddish slope that climbed higher from Salmon to Juneau Ridge.

As Roes and Bursell became two tiny dots power-running up into the heavenly views of Juneau Ridge, Frick and I traversed a lesser climb toward the far end of Granite Ridge. Our ascent was long and slight, sparing our quads and calves briefly until we were forced to summit and look down the backside of Juneau.

Below, Roes and Bursell waved up. We all met on a snowfield and begin the wonderful, joyous romp downward on snow that covered a raging river beneath.

Granite Trail awaited but try as I might, my legs could only shuffle. I urged them to go, but they didn’t want to respond.

Around a final bend, before rejoining the Perseverance Trail, Frick was waiting.

We fell into pace together.

Shortly thereafter, Roes and Bursell came sprinting up Perseverance to meet us.

It was the creed of mountain runners.

“No man left behind,” Roes and Bursell said together. “Want to meet for beer and pizza?”

The two left us for showers. Frick left me to move his car closer to the trailhead.

As I walked down the final portion of the trail, I saw Frick sitting on his tailgate with a smile.

“No man left behind,” he said. 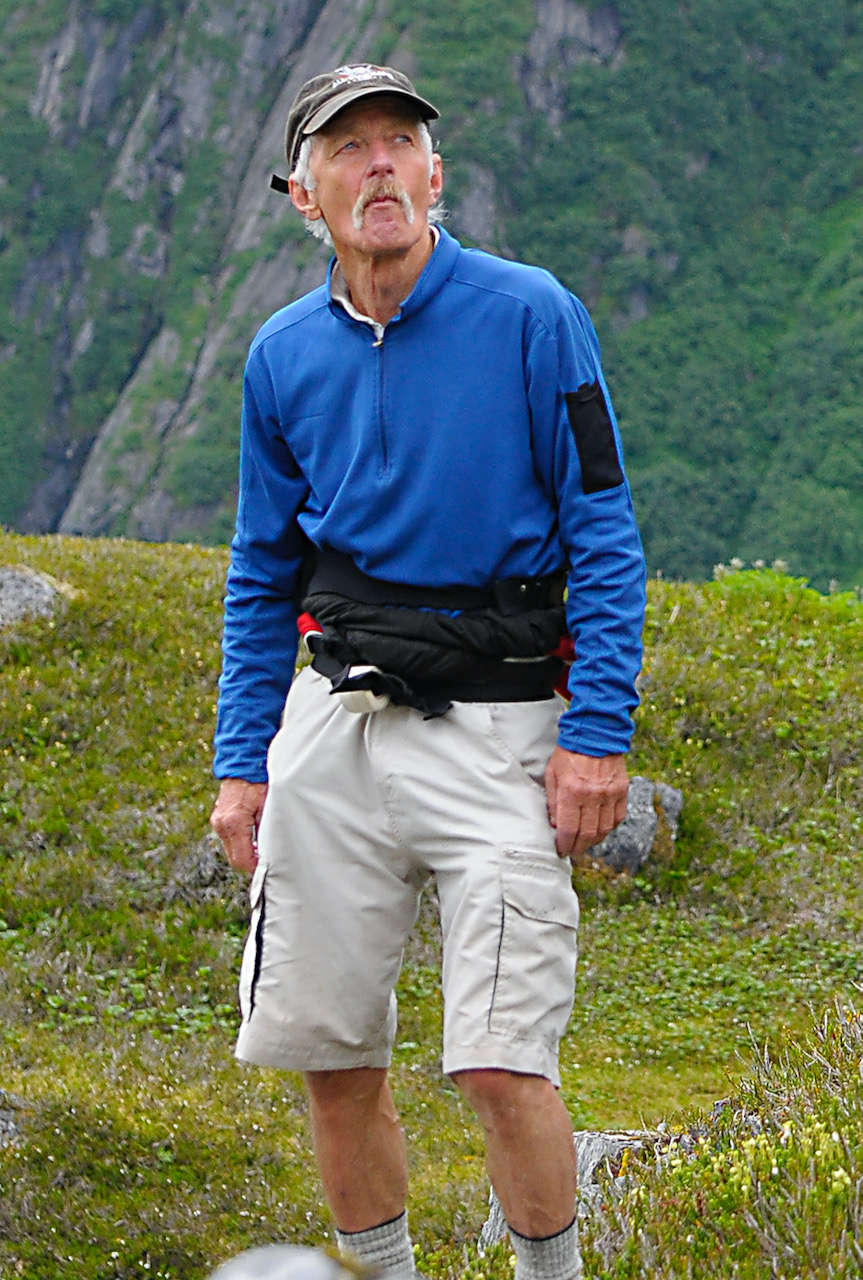 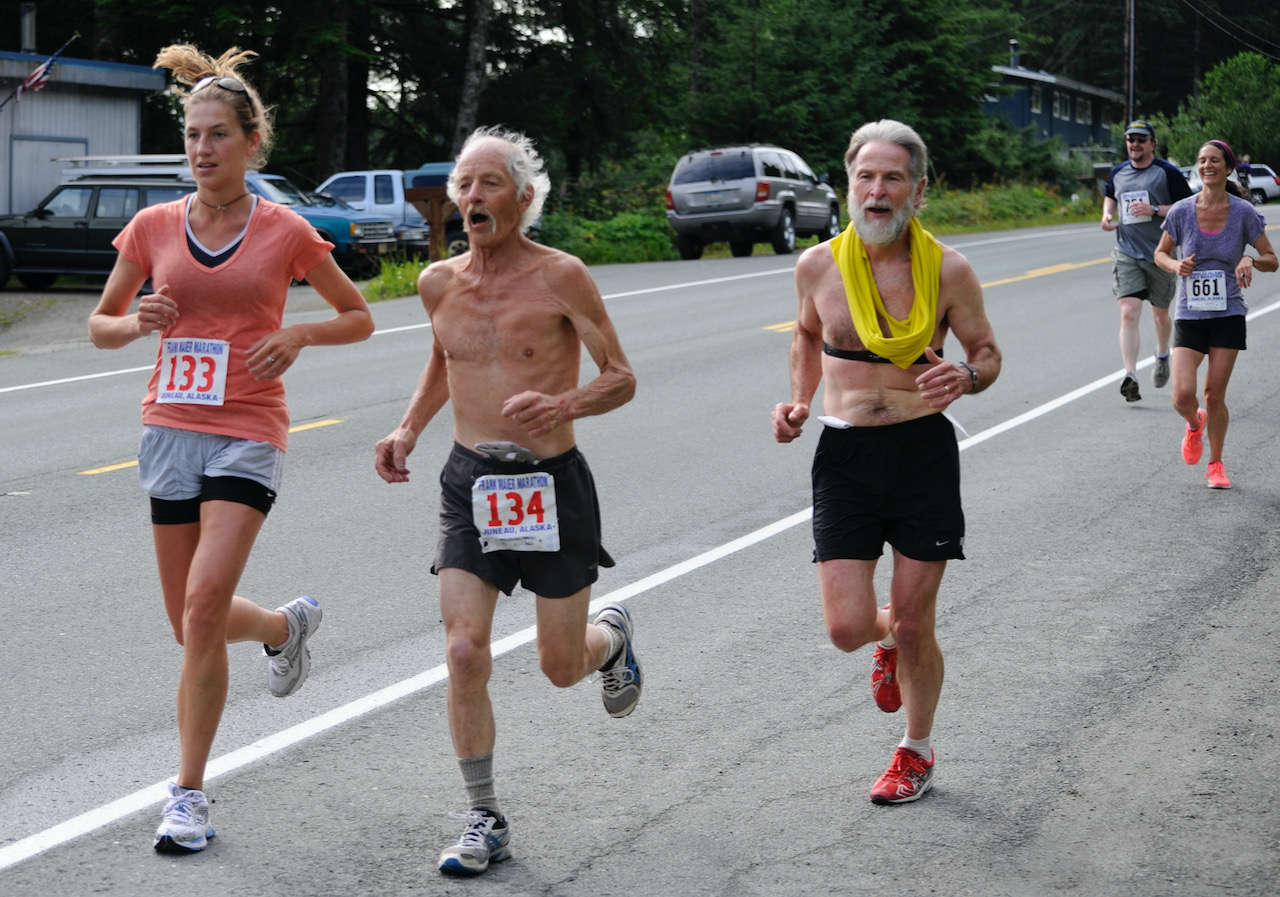