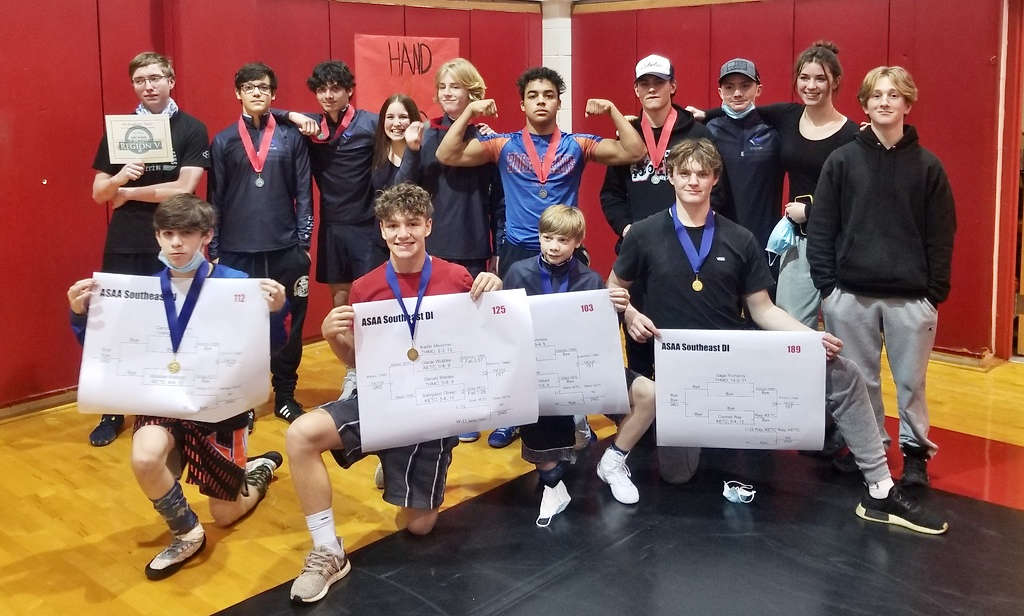 Juneau, Alaska (KINY) - Thunder Mountain senior Kadin Messmer, juniors Sage Richards and Carson Cummins and freshman Colton Cummins all won championships in their weight brackets at the Region V Championships in Wrangell on Saturday and qualified for the state tournament along with five other teammates.

“Not too shabby,” Thunder Mountain head coach Adam Messmer said. “It is just us and Ketchikan vying for our spots to go up there and some of the weight classes only had a handful of guys in them. We were kind of fighting an uphill battle this year with a full team of seniors from Ketchikan and having freshmen go out there and give it everything, a David and Goliath kind of thing. They go out there thinking they will win every match no matter who it is.”

This was Kadin Messmer’s first matches of the season. He was a high state placer last year and was recovering from a football injury this season. His first weigh-ins were for last weekend’s home meet but he forfeited matches to continue recovery.

“The dad part of me was a little concerned with him not having much mat time,” coach Messer said. “But he got in there like he hasn’t skipped a beat. I don’t think he had a total of a minute and half of wrestling in his two matches. So he’s right back in it.”

“The region tournament was really good,” Kadin Messmer said. “I felt like our team did pretty good considering the number of people we had compared to Ketchikan. Definitely feels good to start having more matches. I am really looking forward to the state tournament. There is some pretty good competition up there. I am going to work on some things this week. Work on staying in good position so I will have better chances of my moves working and just try to find any weaknesses I can and do my best. There are a few wrestlers that are pretty good in my bracket this year. I would really like, this being my senior year, to be in the finals and have a chance to take state this year.”

“Sage had beaten that kid multiple times before but that kid has been working hard to come get Sage,” coach Messmer said. “He caught Sage a little off guard. He had Sage on his back twice in quite a bit of danger but Sage fought off his back and came out with the win.”

“I felt like I didn’t do great in the first round,” Richards said. “Then I kind of came back and pinned him. It was just like a typical pin, the arm bar, my usual move.”

Richards has competed at state before and is considered a danger by opposing coaches.

“I expect I will have to go against a bunch of really talented wrestlers,” Richards said. “And have to utilize all my skills that I have been working on the whole season and put it all together at state. I think my plan is just to wrestle my match and do the stuff I am good at like my double leg.”

Richards noted how well the Falcons showed at regions.

“I was impressed by how many freshmen made the finals,” he said. “I was really proud of that.”

“Carson has battled that kid the last six years, through middle school, and that kid is always gunning for him,” coach Messmer said. “It was physical and Carson took it.”

Carson Cummins described his pin and what he awaits him at the state tournament.

“I ended up trying some weird move with my arm and went out of bounds,” he said. “We meet right back at center and right off the whistle I end up going for a low single and I took him to his back. I put him in a head and arm. I held him there for a bit and then I ended up pinning him.”

He described his state competition.

“There are about three,” he said. “A kid from Colony, a kid from East and from Wasilla. I don’t think I’ll change that much. I’ve always been on the offensive side. The hardest one is also an offensive guy. That’s normally what I do most of the time. I think I am going to take my time and not be sloppy and be comfortable. The week of state is pretty easy in that you take it easy, get some conditioning but you don’t want anyone to get hurt and you don’t want them to be sore for the state tournament. So it’s more technique.”

“Colton is one of the easiest kids to coach,” coach Messmer said. “He wants to try something new in each match but realizes that if it is not going to work don’t force it. He had a plan going into the match and it didn’t appear to be working that way so he reverted back to what we worked on in the room the whole year and pinned him.”

Colton Cummins described his win and the upcoming state tournament.

“I was trying to do this one move and it didn’t really work out so I stuck to my double arm bar, got him on his back and just pinned him,” he said. “I am looking forward to wrestling this one kid. We wrestle each other a lot. He’s beat me twice and I’ve beat him twice. My bracket is pretty tough. I do get a little nervous but my coaches kind of talk me out of that. I have a lot of competition but I am ready for it.”

Falcons freshman Justus Darbonne (5-1) placed second at 140 pounds, losing by pin to Ketchikan senior Degan Linne (14-1) in the second period. Linne was second at state last season and second at the Lancer Smith Tournament this season.

“It wouldn’t surprise me if he doesn’t take first this year, and that first period it looked like it could have been anybody’s match,” coach Messmer said. “Justus had a great reversal on Degan and you could see Degan’s eyes kind of open up and it wasn’t the easy match that he thought it was going to be and Justus gave him a run for his money. Being a freshman that says a lot.”

“His opponent was a senior stellar wrestler,” coach Messmer said. “Chase was getting beat pretty bad and then pulled a move and had Kai on his back for a minute. The ref thought he saw something that might have been potentially dangerous and stopped the match. I had talked to the ref afterward and it could have gone either way, but you have to agree with the refs but it would have been nice to see how that played out a couple more seconds.”

Only the Region V champion and second place finisher travel to state.

The state championships are Friday and Saturday at the Alaska Airlines Center in Anchorage.

“The week before state is keeping our conditioning up with a bit of running, a bit of fun,” coach Messmer said. “We’ve been playing some games and having some fun in the room this last week but there is a bit of technique we still need to go over. Ketchikan made some adjustments for us and we made some adjustments for them. Now we have to go back to what we have seen at Lancer, kind of go through the playbook on each kid and go through those moves with all those kids. And then when we are up there it is a real time adjustment, where every kid and coaches are watching kids in the bracket and see where they have made adjustments. And being at that caliber of a wrestler you can make those adjustments in real time.”

Two wins put a wrestler into the semis, three and it is a final’s appearance. One loss at state takes a wrestler out of first- and second- place contention, but they can still place third through the consolation bracket.

“That takes a lot of wrestling on the back side,” Coach Messmer said. “If you lose your first match you are wrestling a lot in two days just to get to that third place match.”