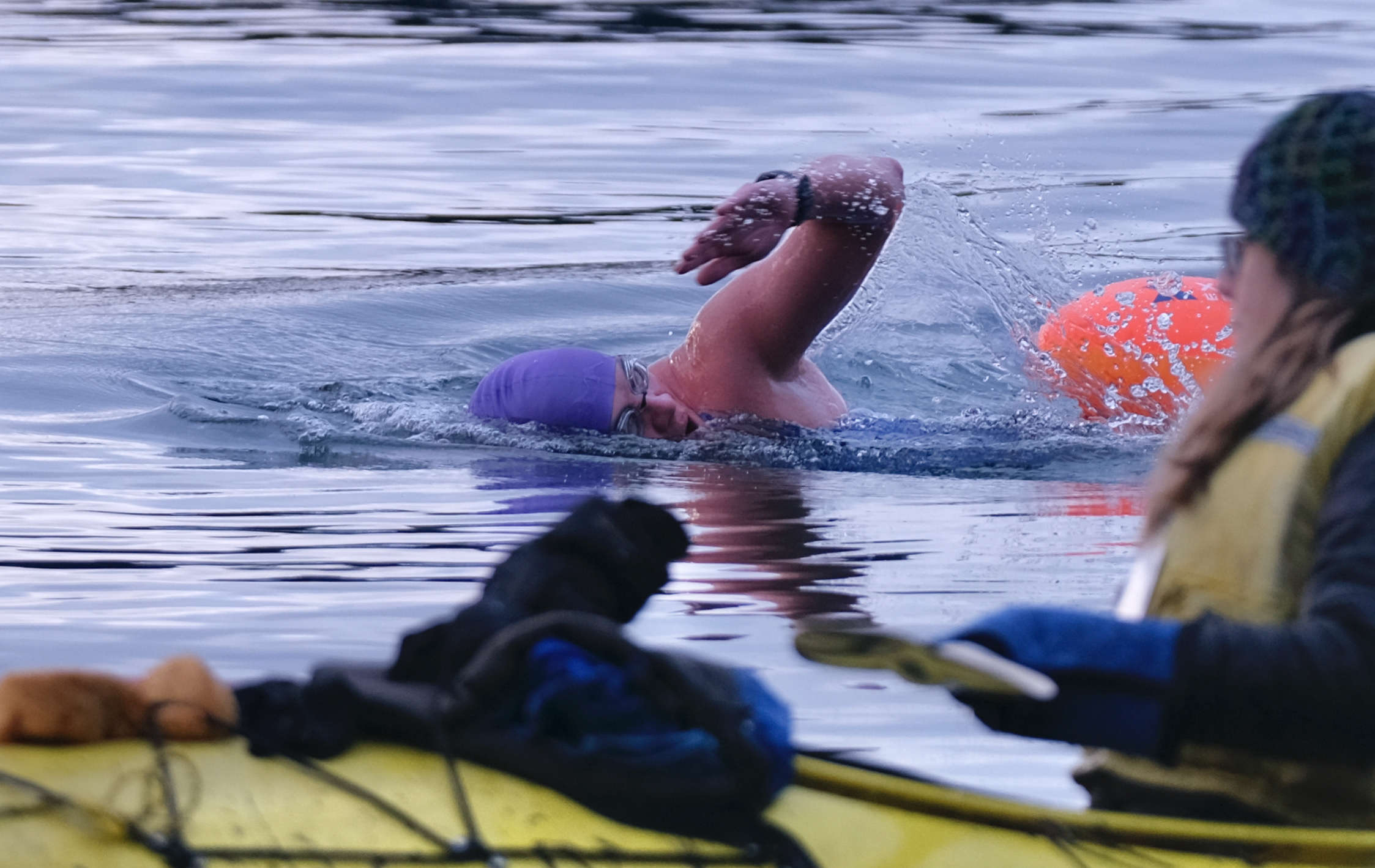 Juneau's Cheryl Fellman swims during her attempt to complete the International Ice Swimming Association's Ice Mile swim on Saturday in the waters off the Auke Recreation area. (Klas Stolpe)

Juneau, Alaska (KINY) - Juneau resident Cheryl Fellman, 49, became one of just 44 people in the United States, and 424 worldwide, to complete the International Ice Swimming Association’s Ice Mile, finishing the swim along the shore of Auke Rec on Saturday in 34 minutes and 49.21 seconds.

“I feel great,” Fellman said roughly an hour after the swim. “It was so fabulous. Everything about the swim was perfect. I felt great. Never had a doubt. Everything went nice and smooth.”

The IISA, formed in 2009, does not have a required time to finish the swim but swimmers have to be unassisted and wear only a standard bathing suit, one pair of goggles and a standard silicone or latex swimming cap.

“It’s pretty exciting,” husband Jason Fellman, who set the course, said after wading out to hand his wife a towel and help her ashore. “This wasn’t on her radar necessarily a year ago but it just kind of developed along the way so that’s a really good example of somebody who’s got a goal or a dream and does some homework and makes it happen. So it is pretty cool.”

Fellman’s son Logan, 12, was filming the event, following his mother from the shore.

“I think it is an amazing accomplishment for her,” he said. “She’s going to enjoy it for a while.”

Fellman swam between two buoys set 270 meters apart for a total of 1,620 meters.

“I made it a little longer so there would be no doubt,” Fellman said. “So it required three full loops.”

The buoys were set roughly 10 to 20 yards off shore in water between waist deep and, in some areas, slightly over her head.

“Which is something I never do in a training swim,” Fellman said. “I am never over my head but since I had a kayaker right there in the water, her directions were to keep me on a straight course. And with a high tide like that it allows you to be close to land and in good enough swimming depth.”

Fellman stayed in a car until everything was ready for the swim to begin.

“I just really got myself mentally set,” Fellman said. “I had to remind myself that I had done the training, I am acclimated to these water temps, and the hard work was done. This was just kind of checking the box to make it official. I was really calm going into it. Just walk in and do what my body was trained to do.”

During Saturday’s swim, at the second to last buoy, Fellman paused at the turn, chatted with support kayaker Adelaide Johnson and said loudly, “Let’s do this.”

The IISA has a rigorous safety standard for the event.

Johnson’s job was to make sure Fellman’s stroke was consistent and there were no danger signs of extreme hyperthermia setting in.

“I met with my support group earlier in the week to make sure everyone knew their roles and we were ready to do this,” Fellman said. “For my kayaker I told them every time I took a buoy I would give them a verbal ‘good’ letting them know I was okay. I wanted it to be verbal so they at least could hear my voice, to be another sign I was doing okay. Every buoy was a ‘good’ until that last one when I said, ‘Let’s do this.’ I was pretty pumped coming around that last buoy.”

Fellman’s stroke count was also kept between the two buoys and every verbal okay to Johnson was relayed  ashore to official witnesses Cathy and Bob Foy, who helped with registering the statistics.

“She has to have an average water temperature, with three thermometer readings, at a depth below five inches of under 41 degrees,” Cathy Foy said. “Isn’t that terrible? So cold. We have a lot of temperature data. It has to be taken from more than one spot.”

“The final safety measure is we had a stop time,” Foy said. “Where she said if she exceeds this time then we pull her from the water regardless, whether she is done or not. But she didn’t come close.”

A stop time is used because when a swimmer becomes hyperthermic they quit thinking rationally and could endanger themselves by staying in the water over their threshold for recovery.

Fellman said she wasn’t going to get caught up in the temperature.

“It was a little colder than I had hoped,” she said. “But I was ready to do it, I had done the training. I wasn’t going to get hung up on a number. It’s not going to get warmer, it’s only going to get colder. I decided, ‘Forget the number, cold is cold, after that is just more pain. Don’t worry about it, I can’t control it.’”

Fellman said she picked up the pace in the final stretch.

“I was thinking, ‘I am going to get this done, it is really happening.’ I did think about that,” she said. “I was totally thrilled but at the same time very cautious because I know what comes next. To me I wasn’t done, I was one half of the way.”

Once Fellman left the water, Kristin Cox became the “stripper” -- the person responsible for her safety on land, helping Fellman dress and get up to the warming area.

Dr. Nate Peimann served as the medical doctor and monitored Fellman’s health before and recovery after the event. Fellman had to pass a series of medical tests and file paperwork to get into the water for the attempt and after an extreme swim like this there is a dangerous period when the heart pumps the cold blood from extremities to her core. This is referred to as the after-drop.

In a cold water swim, all the warm blood in the extremities goes to protect the core and the extremities get cold. Roughly 10 minutes after exiting the water that cold blood begins to circulate back through the body’s core, which causes a period of intense shaking and shivering as muscles contract trying to produce energy to warm up the core.

“The after-drop phase was a little bit longer and tougher than it normally has been,” Fellman said. “But I anticipated that with the colder water. But once I got past that, now I am nice and toasty warm sitting here in my bed with a big smile on my face. The swim is really the first half and the second half is the after-drop. You don’t celebrate after you get out of the swim. You have to get through the, what is actually to me the hardest part, is the after-drop. I acclimated to the water temp. I have always been totally coherent, even in the after-drop phase with the shaking. Along the way I have taken meticulous notes on how I respond to each water temperature and how long that after-drop is. You lose a little bit of mobility, you know, you can’t zipper up stuff. That’s why you have people jumping in there doing that for you.”

Also on the beach, Jessica Paris filled the role of “bouncer,” making sure people knew what was happening and ensuring Fellman had space to swim and recover.

“My job was to make sure people really stayed away from her,” Paris said. “Make sure they really knew what was going on, but also so she didn’t have lots of people asking her questions. You know, don’t ask her where the hot mug of tea is. We are supposed to do all those things. We kind of figured out all the roles that were needed and this was one we identified as to keep the crowd in line and what not.”

Scott Jones was an official “observer,” making sure safety protocols and requirements were met and along with one witness attest to Fellman’s completed swim application once submitted to the IISA for final approval.

Standing on the Auke Rec beach, daughter Emma Fellman, 15, a member of the Glacier Swim Club and the Juneau-Douglas High School Yadaa.at Kalé swim team also followed her mother from the shore line. She said it is something she would never do.

When asked who was the better swimmer she replied, “Me in the pool, her out here. I will take the 80 degree water, she can have the 30s. I definitely don’t think I could do this. It’s pretty cool. I’m pretty proud of her. She has worked hard. It’s crazy.”

The “craziness” started in 2018, when Cheryl Fellman did a 50-meter ice swimming event in Vermont in 30-degree water. That event was virtual in February this year. Fellman began training in January of this year and will do that event in February. But during her training she realized how well her body was acclimating.

“I thought, ‘Let’s take this a little longer,’ as it was becoming more and more favorable,” Fellman said. “Then I just made the decision to try and pull this off this year. I wasn’t going to let that training go to waste.”

Since the beginning of 2021, Fellman has trained every week. She started in the waters off the North Douglas boat ramp and moved in March to the waters near the whale sculpture.

“Because I was going longer distances I wanted to be closer to home,” Fellman said. “So I could get back in time for my after-drop.”

During tourist and boat season she moved to the shelter of Auke Rec, where she was comfortable following the shore. Initially she was swimming one day a week in the colder months.

“Because I had this other goal of swimming every week in 2021,” Fellman said. “So that was another side goal that was going on.”

Then in the summer she cranked up the distance to a mile three times a week for pace work. As the temperatures subsided again she went back to once a week up to Saturday’s completion of the Ice Mile swim.

“Even though I had a successful attempt today, it won’t be recognized until I submit the application with the observers and witness information and photos and videos taken by all the friends that were out there,” Fellman said. “Because they want to make sure that I followed all the rules set forth and I did it safely and all the temperature readings are in accordance and all that.”

Fellman noted that while it was fun to join such a small number of Ice Mile finishers, “today was just marking the box and officially getting it done. But during the whole process, the journey has been the destination. Everything I have done this year I have learned more about myself and is far more valuable to me than the number. The number is cool, but the experience, the process, has been really cool. It is always about challenging any preconceived limitations you have on yourself. I like to prove to myself that I can put my head down, I can be mentally tough, I can be strong and train for something and accomplish something that I would have never considered in a prior stage of my life. To me it is a lot of continued self-discovery of my internal strength and my own mental toughness. It’s fun. I find a lot of enjoyment out of it.”

Meanwhile, the side bet goal of weekly swims is still on.

“I’m going to make it,” Fellman said. “I’m not going to be swimming per se. I’ll be with a little kick board keeping my head out of the water. But I’ll have a big smile on my face.” 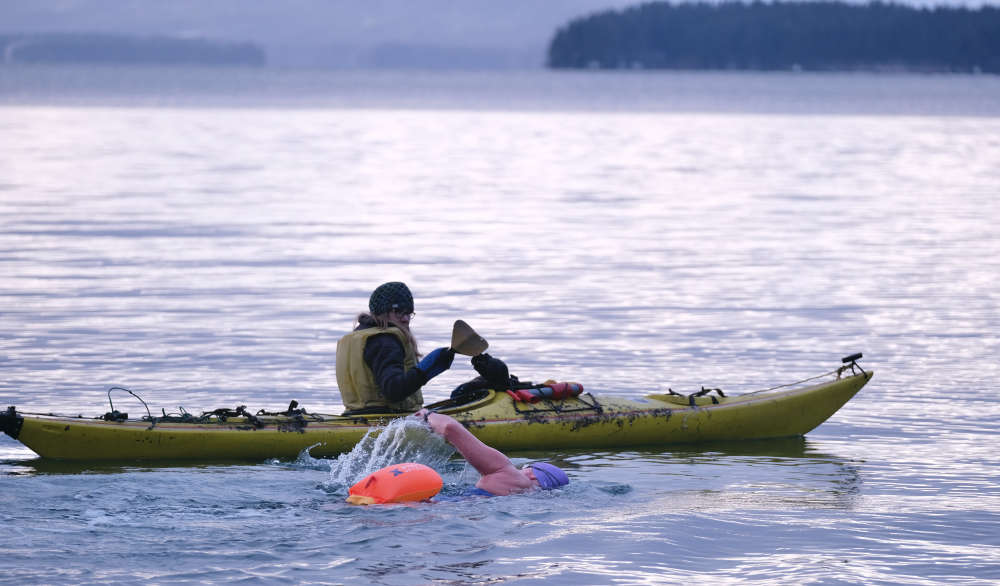