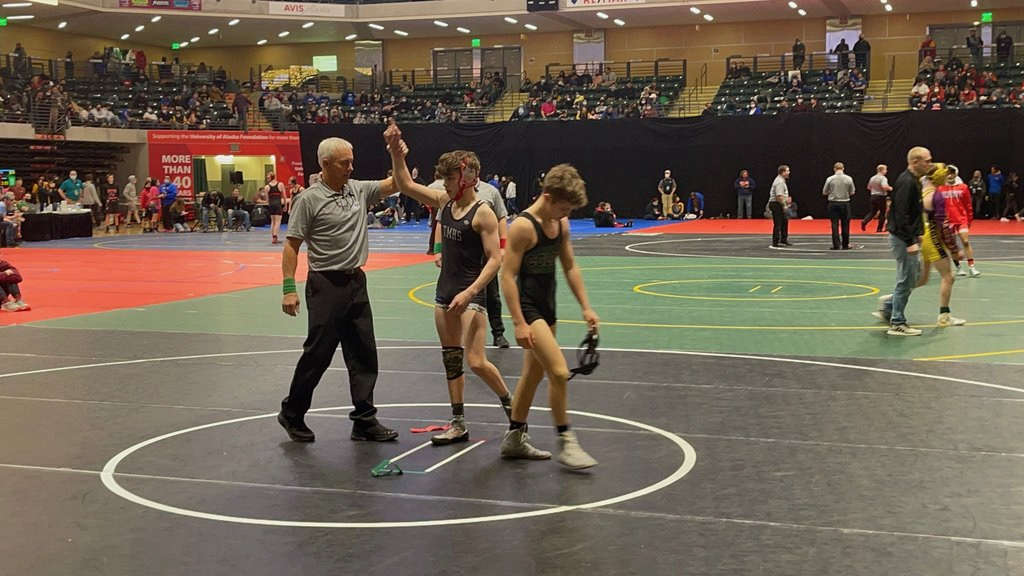 Juneau, Alaska (KINY) - The Thunder Mountain High School wrestling team left their hearts on the state mats over the weekend with three grapplers placing on the podium and the Falcons taking ninth in team scoring.

Cummins was taken down halfway through the first period and pinned with one second left.

Cummins opened the tourney with a pin of Kodiak’s Ram Caballa, pinned South’s Israel Valadez in the quarters and won 7-5 over Colony’s Asher Clayton in the semifinals.

“Carson has been getting better every year,” Messmer said. “That kid beat him by a point at Lancer (Smith Tournament in Anchorage) this year and then Carson beat him in overtime to get into the finals. That kid in the finals was just an animal, he was a little bit more pumped up and wanted it a little bit more. He kind of caught Carson in a bad situation pretty quick. Carson is a very technical wrestler. He’s a smaller kid so a lot of his partners in practice were freshmen and he taught them a wealth of knowledge. There were freshmen in practice hitting moves that I wouldn’t expect freshmen to do and that’s all because Carson is in there rolling around with them and explaining it as they go through it.”

Messmer, a state placer last season, was not seeded in the tournament as he was injured most of the season.

“I had three hard kids right away,” Kadin Messmer said.

Soldotna’s Miller was a familiar opponent.

“I’ve wrestled him in middle school and stuff and club matches and he has always beat me,” Kadin Messmer said. “I ended up wrestling that match pretty smart and came out with the win. That match moved me to the third place match and I feel like I wrestled that match pretty smart, too. I’m a little bummed I couldn’t be in the finals but third place is always good and it feels good to end off my high school career with a win as my last match.”

Kadin Messer only had a week to train for the regional tournament due to suffering a broken leg during the football season in the Juneau Huskies last home game. He played in the state championship game with what was believed to be a pulled muscle. His rehabilitation included weight room sessions and battle ropes and he pushed himself to his first two matches, which were in the region tournament which he won.

He then had only a week after regions to prepare for state, making third place at state a remarkable achievement. Kadin Messmer described his third place match.

“He’s pretty strong,” Kadin Messmer said. “The last two times we wrestled was in middle school free style, which throws are worth a lot more points. Those two matches I was winning and he ended up winning by throwing me in the third period because I made a simple mistake. This time I was winning in the third round by three points and ended up catching him off guard and throwing him. It was a big difference in the match.”

Kadin Messmer thanked the coaches in his career, including Jesse Cruise, Sam Carney, Josh Houston, his father Adam, Gideon Monet and Dan Ondrejka, among others. He commented on leaving the Falcons team in good hands.

“Sage (Richards) has come a long way,” Kadin Messmer said. “After middle school he just started walking through kids and Carson (Cummins) is one of the smartest wrestlers I’ve ever got to know. He knows every wrestler in Alaska and what they do. It’s a shame he got pinned in the finals. He can do better. I’ve known them for a long time and couldn’t be prouder of them.”

Coach Messmer commented on his son’s return to the mat.

“When he got into the room the last week or so the team saw him pushing himself,” he said. “He was wrestling a full minute with one guy and then going into another minute with a fresh guy and I think that opened the eyes of the other guys in the room as to what it takes to get to that high level."

“He was really strong and he’s a good wrestler,” Richards said. “It was fun to wrestle him. But, you know, I didn’t win, I didn’t come out on top. Sometimes that happens. It’s still a fun sport and I enjoy it.”

Richards was seeded with a bye to open the tourney, pinned Colony’s Gabriel Beaudoin in the quarters and lost by pin to South’s James Shivers in the semifinals. In the consolations, Richards pinned Palmer’s Lucas Frank to earn the third place match.

Richards took fifth place last season. This year he joined the team after the football season finished in their state championship game and was considered an inspiration in the wrestling room to the younger grapplers.

“I think I just started late in the season,” Richards said. “I needed to work harder in practice. I don’t have any excuses or anything, what happened, happened, I don’t feel bad because I left it all out there on the mat. I feel like there was nothing more I could have done to win those matches. Now I just need to work out a lot in the off season, do some club wrestling and prepare for next year's football and wrestling seasons.”

“He is definitely moving up,” he said. “Getting better by the match. The kid he lost to for third place he had never wrestled before and that kid was head and shoulders the strongest kid at the tournament in his division. And to get into that consolation Sage wrestled the No. 1 seed and had him on his back twice. They both came out with a ball of fire, it was just a tough match. Sage’s work ethic is really up there. After placing fifth last year he came into this year with a goal to take state. Unless a kid has been up here and had a taste of success or seen teammates have some success, seeing what that actually means  and the dedication it takes to get to that high level, it is hard to tell a kid what it is. Sage’s work ethic was above and beyond most in the room.”

“We were very celebratory about that,” Coach Messmer said. “After getting beat in regions by them and to come up here with the number of kids we had and only having two kids seeded to their seven, it definitely perked up the team a bit.”

“I don’t know what our luck is about getting drawn into state contenders,” coach Messmer said. “If we have a kid that is not seeded they will be drawn in against the state champ. They all wrestled hard.”

After the tournament the coaches gathered the team together.

“I told them I was proud of all of them,” Messmer said. “They all have been sweating and bleeding on the mat for months to get to this point. This was the big show and they all left it on the line. I couldn’t have asked anything more out of any one of them. Me and my assistant coaches, I can’t speak any higher about them, DanO and Gideon Monet, we work well as a team and I couldn’t do it without those guys. There are a lot of logistics with being the head coach and those guys are right there covering the mat when I am having to run around and do administrative stuff. We are already looking toward next year.” 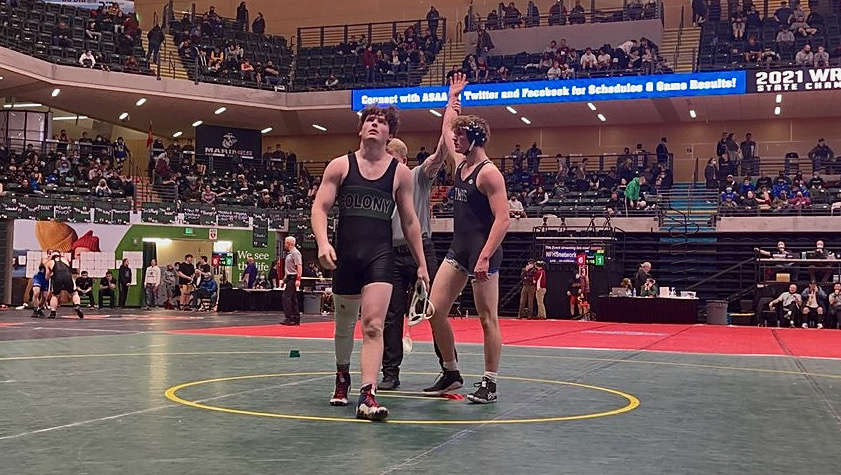 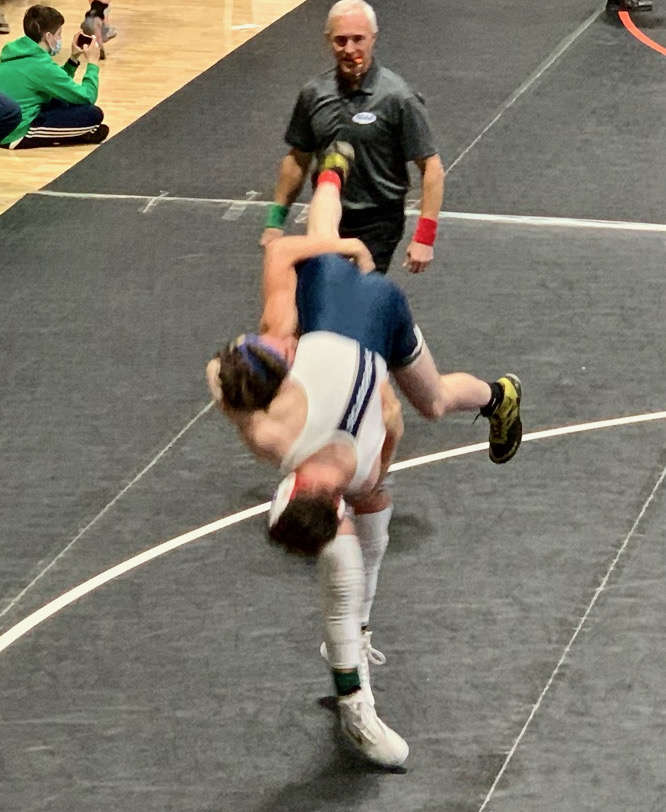