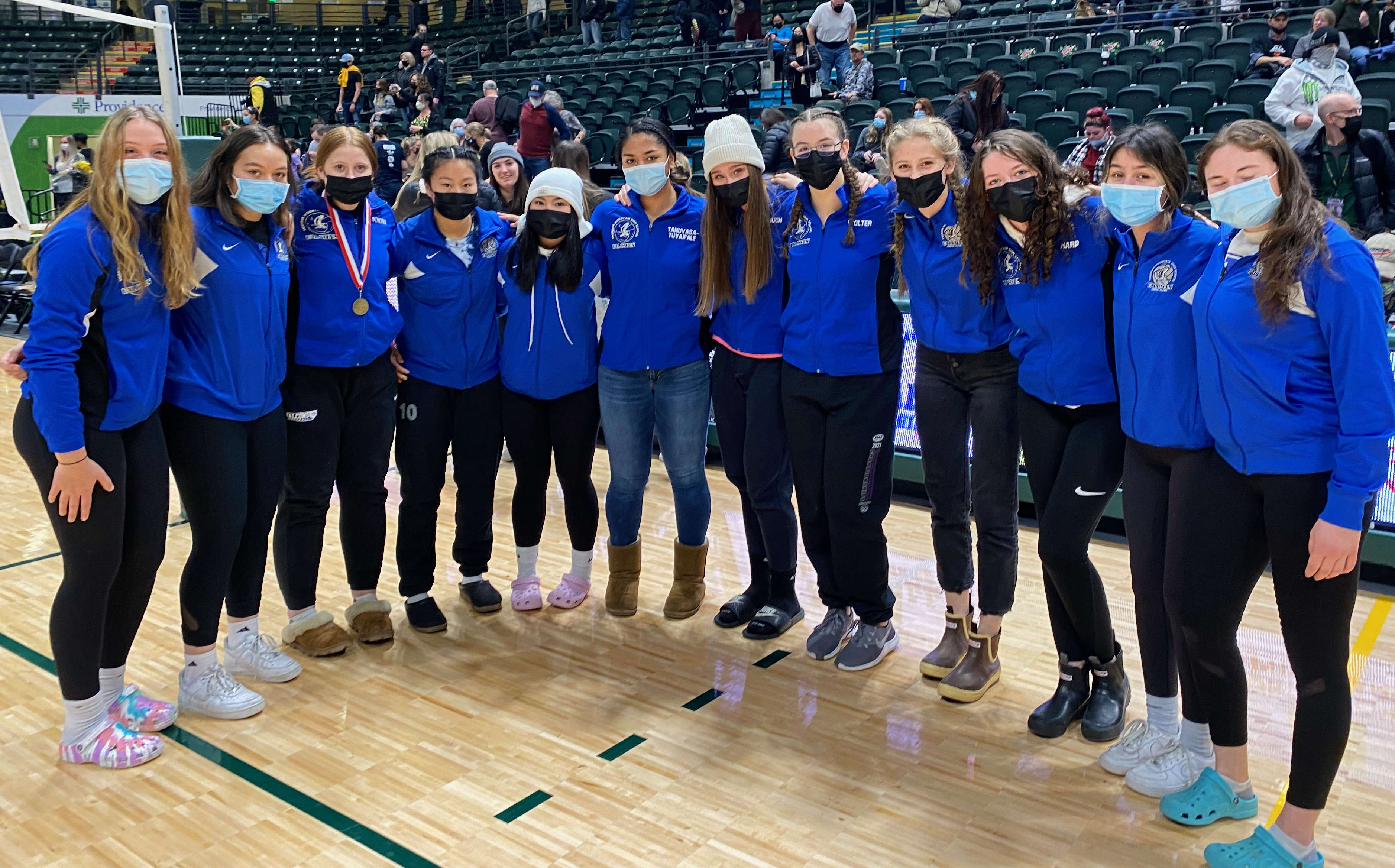 The Thunder Mountain Falcons volleyball team pose for a photo at the end of the 2021 State Volleyball Championships at Anchorage's Alaska Airlines Center on Saturday. (courtesy photo)

“I was really satisfied with the results of the tournament,” Falcons coach Julie Herman said. “Obviously when you are playing you want to place as high as you can and I think our girls placed very well. The season has been great and the kids have competed well and they brought that into the state tournament. I think they are starting to look back on the season already and are thinking it is a good memory.”

“Colony played just fantastic volleyball,” Herman said. “We couldn’t get a hit around their block. Defensively we just struggled putting balls to the floor and then they just came out at us with some pretty lights-out swings and we just couldn’t generate enough defense to pick the ball back up. When you go up against an opponent on a day like that…it wasn’t going to happen for us. As I have always been very proud of our team, they played their best, they never quit. I am very prideful about that.”

“She is just a steady, consistent player,” Herman said. “She gets a lot of passes for us. She is the captain of our program. If she sees something that needs to be done she does it. It is captain-worthy stuff and it has helped us be the competitive team that we are.”

Strong said she was excited for the selection.

“My teammates helped me look really good,” she said. “And I always try and do the same for them. So I appreciate them for that because we were all in it together for sure. Super cool for sure. It was really cool to be honored for that, especially for something that I just enjoy doing with my team.”

Strong said she was happy the team got a win in the tournament.

“I was really happy with our team chemistry and how we were determined to not give up in our team chemistry throughout the ups and downs in all our games,” she said. “Colony is a really good team. They have lots of big hitters. It was super fun learning how to play defense.”

This was Strong’s first trip to the state tournament.

“It was really cool,” she said. “I got to learn lots about sports on a bigger stage because I hadn’t gone to state for any sport. Our goal was to stay super confident and not let the nerves get to us too much and just play volleyball with each other one last time.”

Against Colony, TMHS junior Mallory Welling was selected as Player of the Match.

“It was cool,” Welling said. “That game was a tough one. We really wanted to take a set from Colony so everyone was trying the hardest that they could. Colony’s offense came at us a little harder than we were ready to defend against. But I thought that was super special to have that award given to me. The whole tournament I was so proud seeing my teammates get the award that it made me work harder for the team.”

“I think our state experience was super special,” Welling said. “It was really fun to bond with my team on and off the court while watching other people playing in the tournament. The biggest thing I took away from state was team drive or self-drive. Our coach tells us all the time, ‘It’s not the team that’s the best. It’s the team that wants it the most.’ I think going into next season I want to have that mentality where I want to constantly be trying my best in every single game, in every single play. I want to bring that into next season so I can inspire future players and also help our team do well next year. These are tough teams. We have to play our hardest every time. Having that mentality of constantly doing your best because that is what you need to do when you play these big teams.”

“Palmer is a very even team to us,” coach Herman said. “They are very good with their ball movement. They have athletic girls and height. We just had to be very defensively minded and just keep the ball off the floor and then just continue returning attacks at them and try to score points that way. That worked out for us.”

“Dimond is a great program,” Herman said. “Our kids have definitely enjoyed watching them play and getting the opportunity to play against them. I actually think that was the best match I have seen them play this season. They were gelling and they were working and they were transitioning. Smiles across the board even when they got hit at really hard and it didn’t go our way. They just had a really good time.”

Herman noted that players commented they really wanted to take one set from the Lynx.

“Even just that comment coming out of their mouths, saying they had an opportunity to take a set off Dimond, just says the direction this program is going and the way they played,” Herman said. “We have not said that before. To be able to compete with them, I think the girls are very pleased.”

Said Strong, “We had lost to Dimond a few times earlier in the season. We went into the game thinking ‘what is the worst that can happen, let’s just go out there and play the best volleyball we can.’ It was fun. We were just playing our game.”

Strong commented on her coaches and teammates.

“Over these four years, it has been amazing to play for all of them,” she said. “I’ve watched myself improve as a person and an athlete and I think that is all you can ask for when it comes from coaches. And for my team, I love all of them so much. I am really glad I play other sports with a lot of them because, as a senior, this is super emotional… I wish them the best of luck next year as well.”

Welling said she was also grateful for her coaches’ efforts.

“With COVID and everything it is a struggle,” she said. “And I am really thankful to them for being patient with us and the program as we tried to figure it all out. And also for everyday coming, ready to practice, ready to inspire us to be better and pushing us to do better. That’s why we did so well, that’s why we had a great season… because coach Herman never gave up on us.”

Said Herman, “We tried to improve every day that we went to practice. We focused on something specific so we just kept getting better and I think we peaked at the right time and went into regionals with a really good attitude and that turned out well and we got to play one more week together. State is just a magical place and it was really awesome to share that with the kids this weekend.”

“We brought six seniors and six underclassmen on this trip,” Herman said. “I told the girls it was a magical place and they would love it when they get there. I like to bring a heavy underclassmen group so they can watch it. That makes them play harder and get more motivated to get ready for next season so we can go back.”