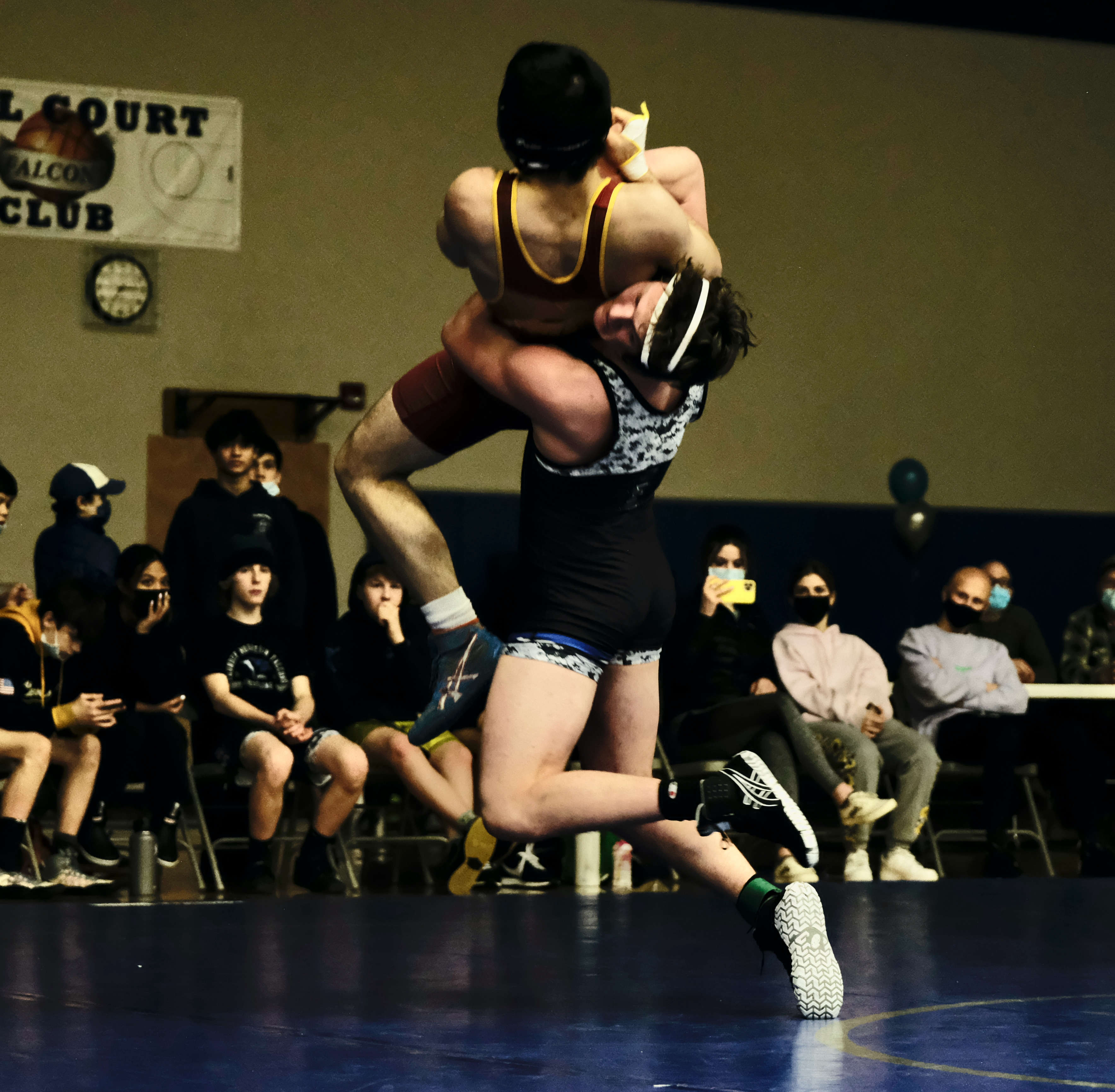 Juneau, Alaska (KINY) - There are 1,440 minutes in a day. If you are a wrestler, only six of those matter and if you are a Thunder Mountain High School grappler sometimes you need less than that. The Falcons placed 12 wrestlers in the finals of the Pilot Invitational with six winning titles and three being runners up en route to a team title over six visiting squads.

Falcons junior Sage Richards pinned one of Mt. Edgecumbe’s top state contenders, 189-pound Kael Osborne, with 1:22 remaining in the second period of their championship match. Richards held a 2-0 lead after one round as the two were virtually even on the mat. Haines’ Jackson Long took third over MEHS’ Paaraq Nelson.

“He’s a really strong wrestler so my plan was to wrestle smart and take him down in the first and do my tight waist and either get a stack or an arm bar,” Richards said of Osborne. “In the second round after I mat-returned him I kept working for that arm bar and he was fighting too hard to stop it so I could jump over and get the half on the other side.”

Richards will use the experience of wrestling Osborne for next weekend’s region tournament in Wrangell and to try and secure a spot in the state tournament in Anchorage Dec. 17-18.

“I think he is actually stronger than most of the guys up north but he just isn’t as technical and hasn’t wrestled as long,” Richards said. “So it’s not the same way of wrestling someone as I have to do up there. I have to have more of a go to (move) from neutral and I have to work on my tilts and my tight waists, and my stuff from top, and my stand ups from bottom.”

“I tried to use my quickness and my strength to take him down,” Williams said. “That did work but he was really fast.”

The match almost resembled an MMA or professional wrestling match as the two competitors tumbled off the mat twice, once with Williams hitting his head on a chair.

“That was pretty funny,” Williams said. “I bumped my head a bit but we’re all good, you know? At the end of the day I am proud of him, I’m proud of myself, proud of my coaches.”

Williams said he’s looking forward to regions. He learned an important lesson over the weekend.

“It was a battle,” Falcon’s head coach Adam Messmer said of the Cummins brothers. “I am sure that has been happening for years at home.”

“The Darbonnes are all right around the same weight so sometimes they are in the same weight class,” Messmer said. “They were all separated out tonight and all three of them took home their brackets, so that is pretty special.”

Freshman Justus Darbonne pinned teammate Hayden Aube with 53.8 seconds remaining in the championship of their 145-pound match after an even first period and trailing 3-0 in the second. Sitka’s David Davis placed third over Ketchikan’s Casy Styles.

“Well, I was losing at first,” Darbonne said. “He’s my best friend, really good. I just had to throw it so… I threw in a lap drop and pinned him with it.”

Darbonne said he found some tactics he can use for next weekend.

“I might use throws more and, I don’t know, just try to stay out of Hayden’s way,” he said.

“It was disappointing I had to wrestle my own teammate,” Chase Darbonne said. “But it is always fun just going out there and having fun on the mats no matter who you are going against.”

Darbonne worked on some new tactics he hopes to bring with him to regions and state.

“Just some new moves I have been testing out and we have been training in our practices,” he said. “Just working on those moves and using them every day. We are well conditioned. We work hard together and we are a real team.”

Senior Blaze Darbonne pinned one of MEHS’ top state contenders, Colton Paul, with 1:26 remaining in the second round of their 152-pound championship match. The 152 pounders were broken into two championships due to the number of wrestlers. HNS’ Rylan Jorgenson Geise placed third over KTN’s Collin Elliot.

“To be honest I was a little nervous when I first got out there,” Darbonne said. “I just had to remind myself that it is just a match and you have to win it. Like, there is not an option to lose. So I just fought until the very end and it worked out.”

Darbonne held a 2-0 lead after one round. At one point in the second period the two grapplers reversed their control positions three straight times.

“He had caught me… I don’t know, he did this weird move and it, like, sent my head flying to the mat and then he tried a cow catcher to roll me over,” Darbonne said. “What you are supposed to do when you are on your back, is put your arms up around his waist while you are on your back on the mat and he’s on top of you, and you roll with him… and I just kept doing that until I got an arm, and I just got under his back and just lifted his head and squeezed and that’s what got the pin.”

“What I took away was no matter how intimidating your opponent looks, never underestimate them and never overestimate them,” he said. “Just keep a level head and go in having a plan and listening to what the coaches are yelling at you.”

The three brothers joke about who is the best Darbonne.

“I would say me,” Blaze Darbonne said. “Because I’m the oldest and I’ve been wrestling the longest, but the other ones are up there, too.”

“Probably me,” Justus Darbonne said. “We’ve been grappling each other for about four years and that’s what I think.”

“I think we did amazing,” Falcons coach Adam Messmer said of the weekend. “Not even sure how many guys we had in the finals but it was a lot. We had a lot of guys that were wrestling each other but it was fun.”

Messmer noted the Falcons are night and day from the first month of the season.

“For these guys to do this well at home was huge,” Messmer said. “And hats off to everybody that helped put this all on… Jake Jacoby for running Track Wrestling and all the volunteers and parents, we can’t do it with out them. It’s great to see this much support for wrestling in this town.”

“I love the heart on the team,” Richards said. “I love the commitment that all the wrestlers on the team have, showing up to practice every day, no one ever skips. It is just a good team we have, a good vibe in practice. Good energy.”

“They are really dedicated,” he said. “And … me and Sage being team captains, we are proud of that, you know, because it is hard to be dedicated in wrestling. It is all a mindset for wrestling. Definitely the hardest sport I have ever done. And I am proud of them.”

In the girls 135-pound championship, KTN’s Hayley Gilson pinned WRG’s Jamie Early with 1:13 remaining in the second round. Gilson led 2-0 after the first round. MEHS’ McKayla Kazingnuk placed third.

In the boys 160-pound final, WRG’s Ryan Rooney pinned SHS’ Jason Young with 34.6 seconds remaining in the third round. Rooney led 4-3 after the first round and 7-3 after the second round. TMHS’ Kaleb Paddock placed eighth here. MEHS’ Morgan Allen took third over WRG’s Daniel Harrison.

In the boys 171-pound final, WRG’s Ethan Blatchley pinned MEHS’ Richard Didrickson with 1:16 remaining in the second round. Blatchley led 5-0 after the first round. KTN’s Seth Webb took third over SHS’ Aiden Ojala.

“We pretty much have our weights set now for regions,” coach Messmer said. “We do have some flexibility with some of our guys but for the most part we are pretty set in. They wrestled their hearts out these last two days.”

Note - The tournament is held in honor of Brandon Pilot, who was a freshman on the 2000 JDHS Crimson Bears wrestling team when he died in a rollover auto accident on Fish Creek Road on Nov. 18. A week later, the wrestling team went on with the scheduled Thanksgiving Classic wrestling meet, dedicating it to Pilot’s memory, and won the team title. The following year the tournament was renamed in his honor. Pilot was a distinguished club wrestler and competed at national tournaments. He was an all around athlete, participating in baseball, basketball, football and wrestling. 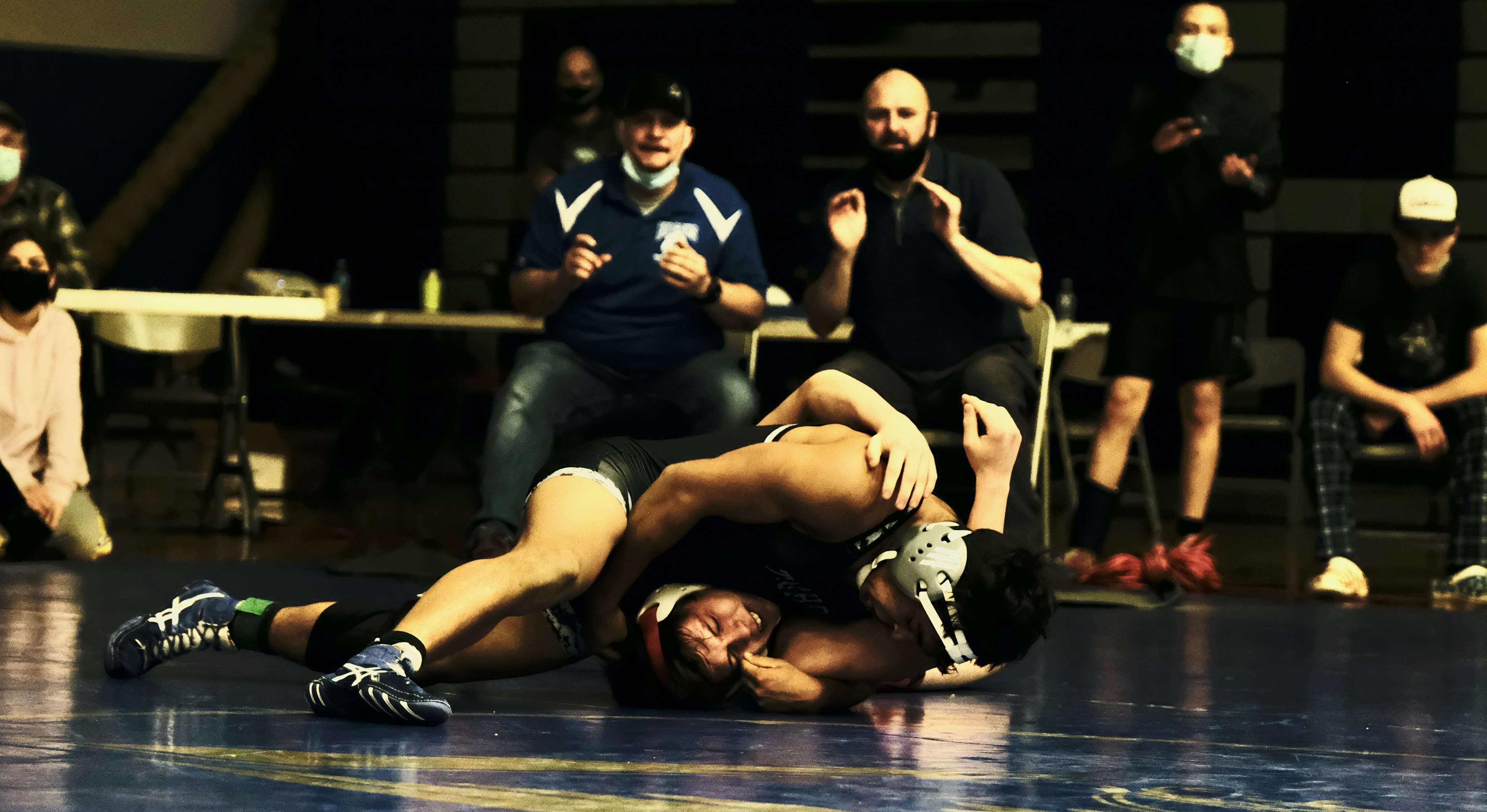 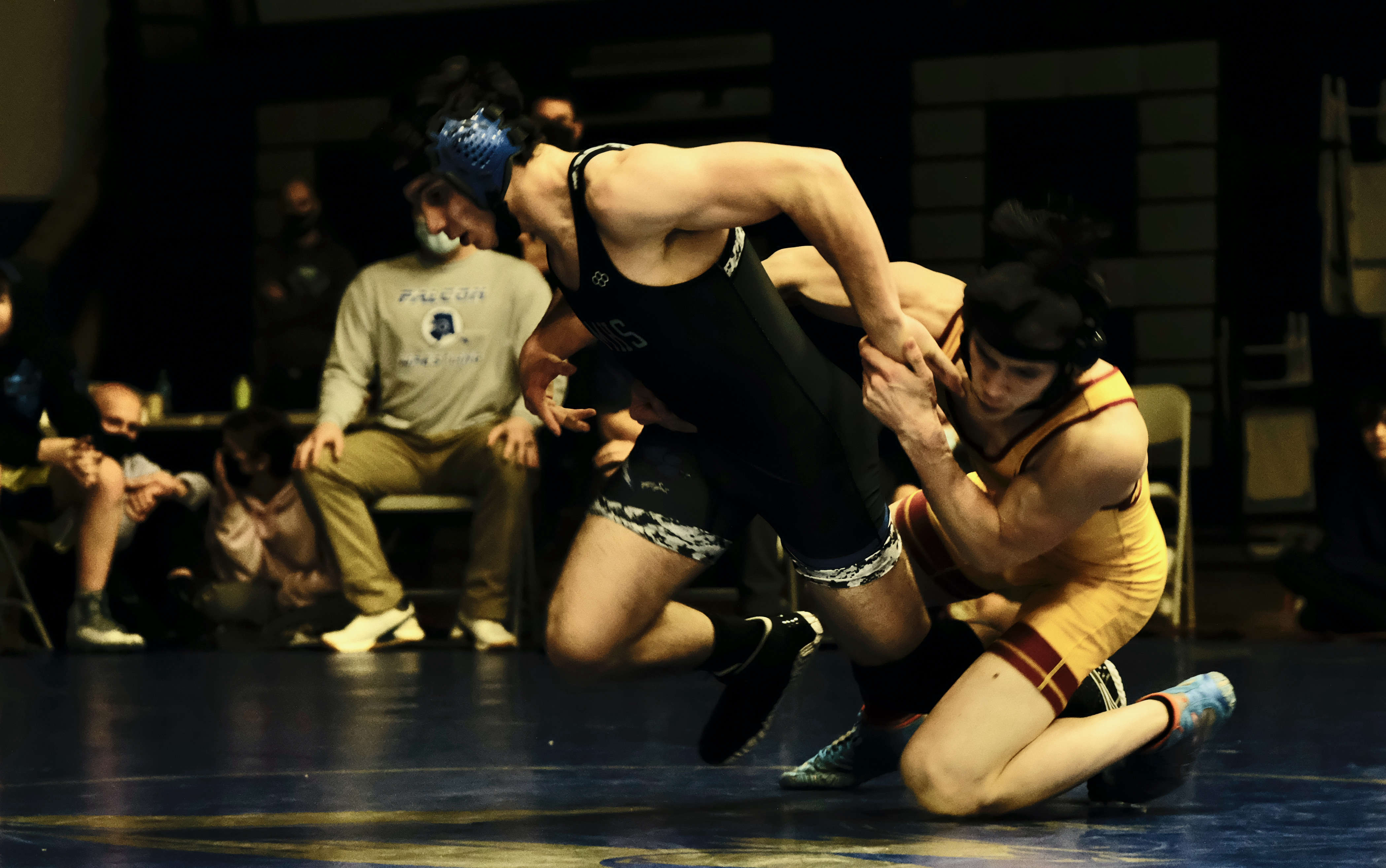