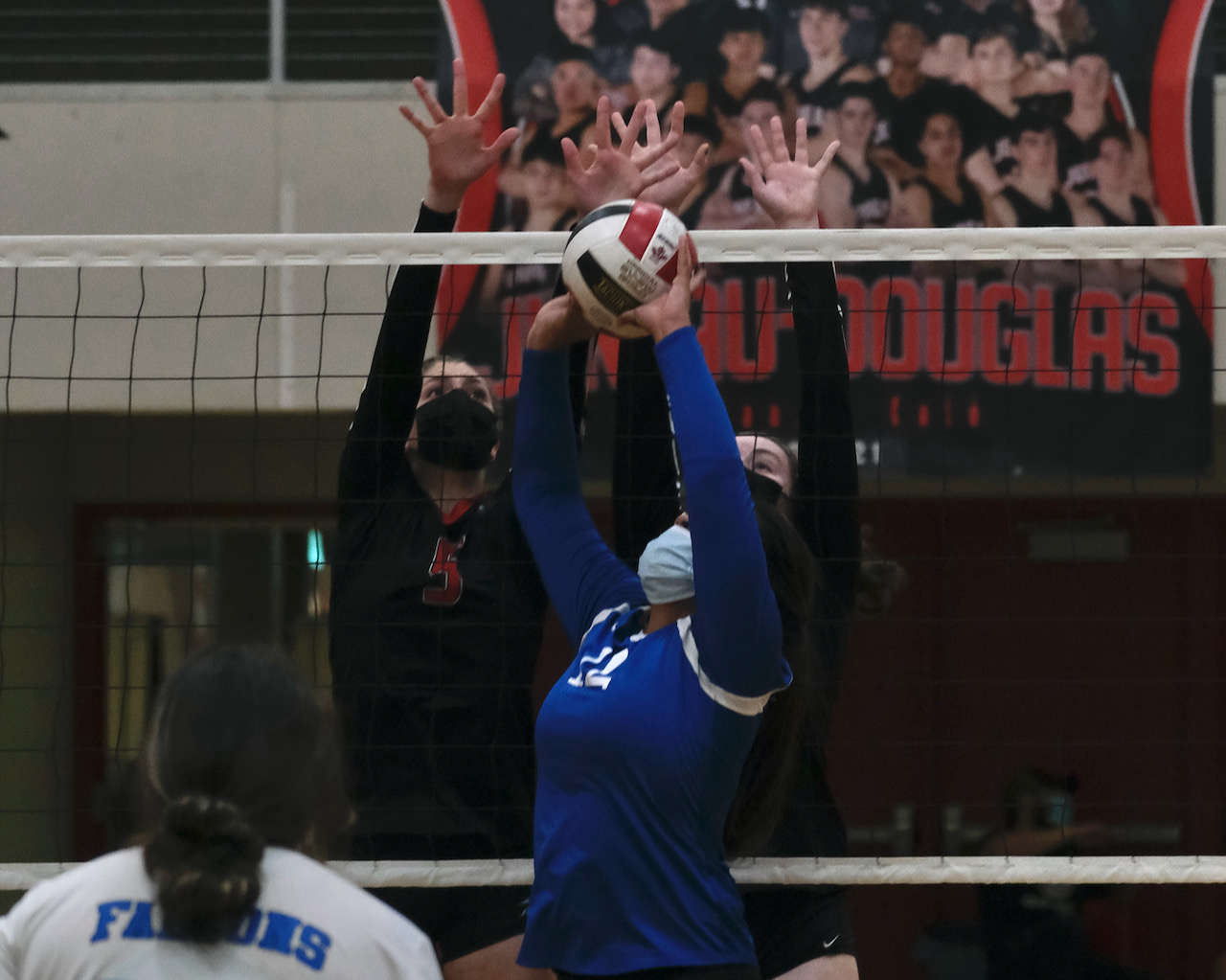 “Man I love to compete,” Thunder Mountain coach Julie Herman said after the Falcons clinched game four and won the match by set scores of 25-15, 25-20, 19-25 and 25-15. “Man that is so fun. Every time we play the games are close and the kids just battle back and forth. Obviously this match we came out on top and we are proud of that. I’m excited that we showed a little heart losing that third set and coming back and refocusing and working on our game and our skills.”

Strong had 29 attacks for the Falcons, Welling 28, Tuvifale 23, Gates 23 and Brocious 20 according to TMHS statisticians.

Newman had 26 attacks for the Crimson Bears, Sanford 19, Laudert 16, and Yadao 9 according to JDHS stats.

“I thought we made a huge improvement from the weekend,” Juneau-Douglas coach Jody Levernier said. “We still have a lot to work on but we had moments where we were coming together as a team.”

Levernier noted Hargrave’s improvement on the right side, Newman’s play in set three, Sanford’s consistency throughout the match, and junior Carlynn Casperson stepping in to fill a big role with 17 serves, two aces and quality passing.

“I think both teams are getting comfortable,” Levernier said. “There are good athletes on both sides. It gets exciting when the girls pick up balls you don’t think they are going to get. Both sides were doing that. I think it really hypes the girls up and they just keep battling.”

In set one Casperson served a first point and Sanford and Hargrave combined on a block for a 2-0 Crimson Bears lead but the Falcons’ Tuvifale served to a 5-2 lead with two aces and a kill by Brocious.

Juneau stayed within a point until TMHS’ Gates served from points 13-17 including two aces and two blocks by Strong.

Strong would serve from 19-22. A missed serve gave JDHS point 11 but Brocious killed point 23. Back-to-back service errors made the score 24-14 in favor of the Falcons and Gates killed the set point for 25-15.

In set two JDHS led 7-2 when TMHS’ Brocious killed a shot and served to within a point. The teams exchanged serve possessions until senior Jorda Bastalio killed for a TMHS 11-10 lead and Strong served to 20-10 including kills by Tuvifale, Brocious and Welling. Welling also blocked two points.

“What I am doing really well is getting my blocks and hits up,” Welling said. “Because last year as a sophomore and really new to the program I was kind of struggling with that. So I think this year it is really helping the team. And I have been trying to get a lot louder and I think it is helping pick up the team too.”

The TMHS fans picked up on Welling’s play and brought out a cheer in her name.

“That was very new,” Welling laughed. “I’m not sure how I feel about that yet but it was cool to have them there.”

JDHS made a run with Casperson serving to close to within six at 22-16 but Brocious killed for TMHS possession and point 23.

Sanford killed for JDHS point 17 and Gates did the same for TMHS point 24. JDHS regained service but had an error for game point and fell 25-20.

The Crimson Bears won set three as both teams exchanged points to a 10-10 score and tied again at 13-13. Sanford served JDHS to a 20-13 lead including kills by Newman. The Crimson Bears stayed up as Yadao killed for 22-18 and Sanford for 24-19 and Casperson put a serve over that the Falcons misplayed for the JDHS 25-19 win.

TMHS had a 5-2 lead in set four when JDHS’ Newman killed for possession and Sanford served to a 7-5 advantage that included an ace and kills by Newman and Laudert.

TMHS came back for an 8-7 lead with Brocious serving and an 11-8 lead with Gates serving.

A service error by the Falcons allowed Newman to get the Crimson Bears within one point at 11-10 but the Falcons responded with Strong serving two aces and a 15-10 lead. Tuvifale served that advantage to 18-11 and Harp served to 20-12.

After exchanges had TMHS in front 22-15 a long rally saw the Falcons save a shot over the net for 23-12 and Brocious aced point 24 and Tuvifale killed match point.

“Last weekend was like two years ago really that they played,” TMHS coach Herman said. “And now everybody is just in the groove. I think that it was kind of deer in the headlights last weekend now is just like we know exactly what we are doing and let’s work through it and we’re going to get to show off our strengths. The level has been risen and that is why it is fun to play every week.”

Herman also noted the fans for both schools.

“I was laughing,” she said. “I heard them go back and forth once and it just reminded me of good times, like before. And it is just awesome to have people back in the gym supporting the kids, that is what we want.”

“I think we improved a lot from the past day that we really had practice and it was nice to see,” JDHS’ Adams said. “I felt like after the second set we really picked up the energy and we fought harder. In the third set we finally got to the top and it was really fun.”

Adams said the team had talked in practice about what they needed to improve on.

“We worked on it and then we all came together as a team,” she said. “We communicated with each other on what we wanted to see for the next game, what are goals were.” 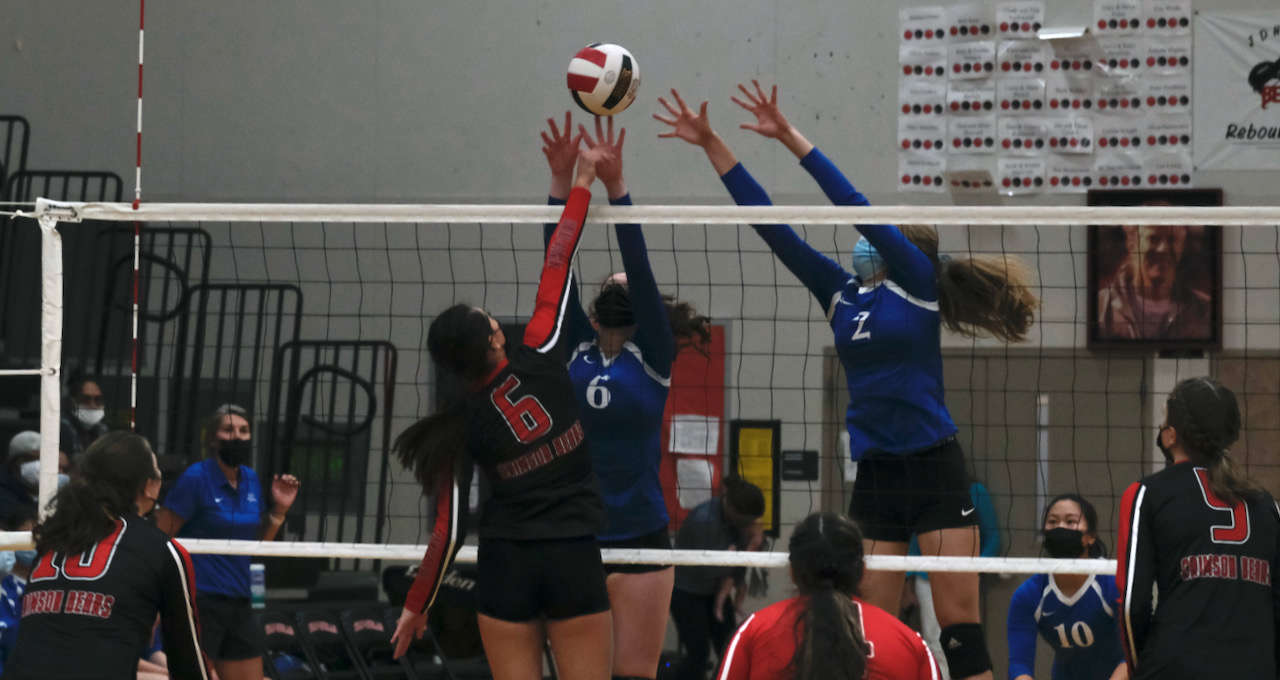 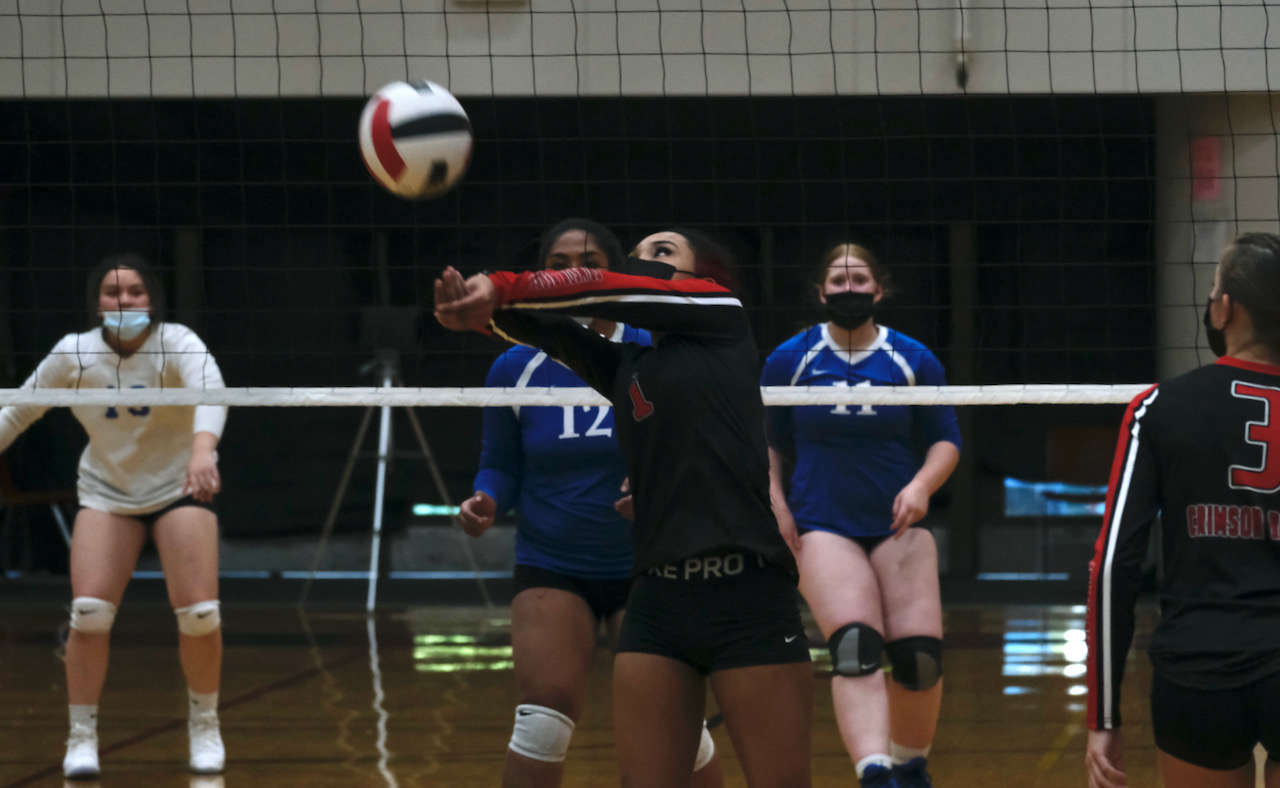 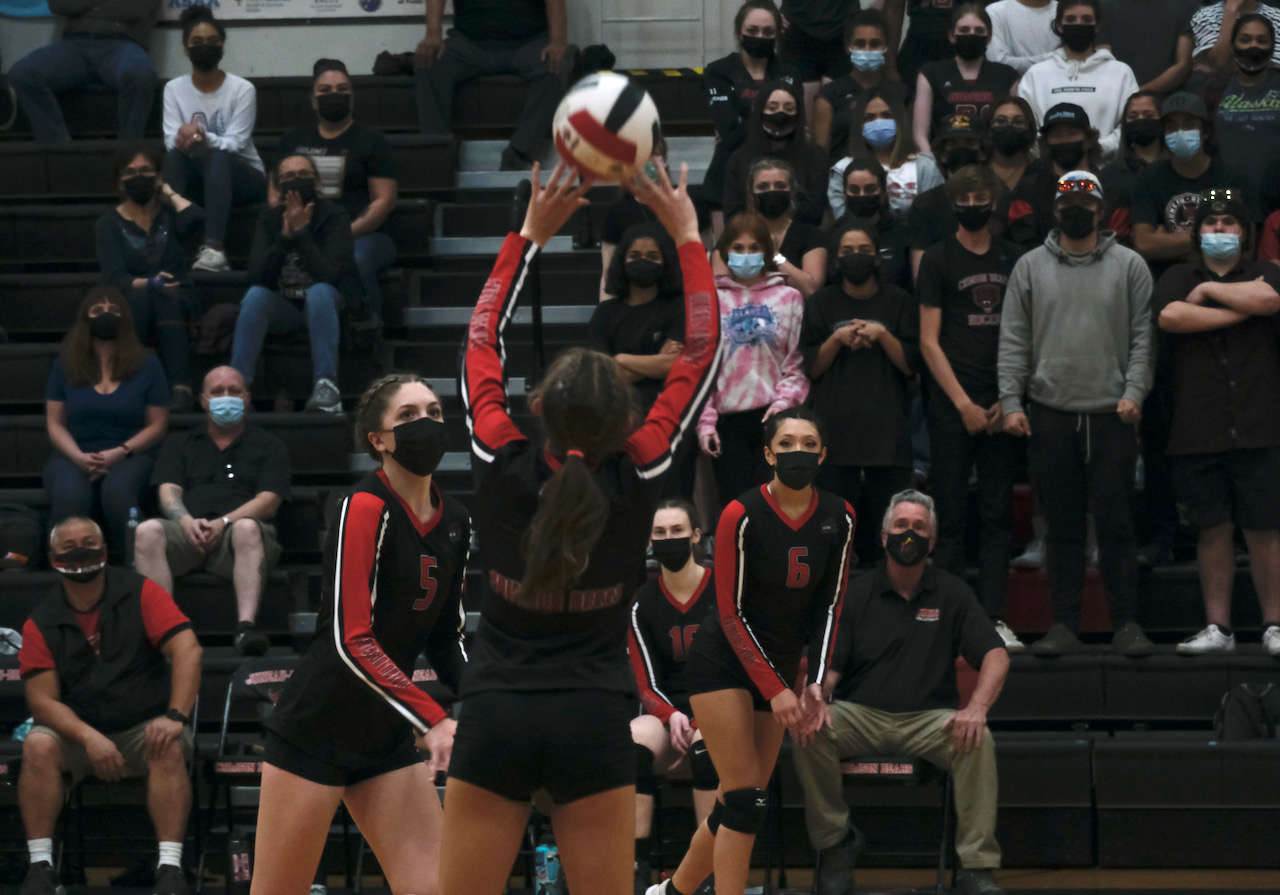 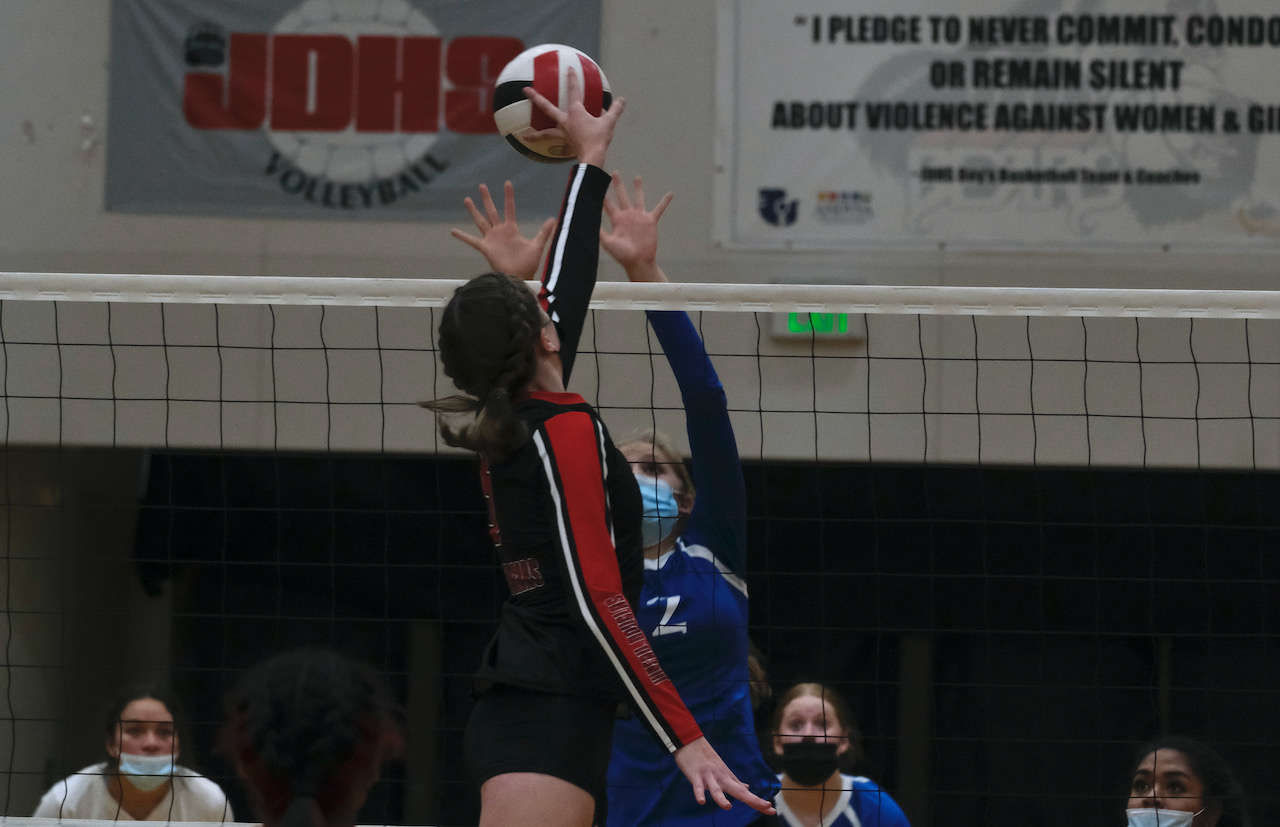 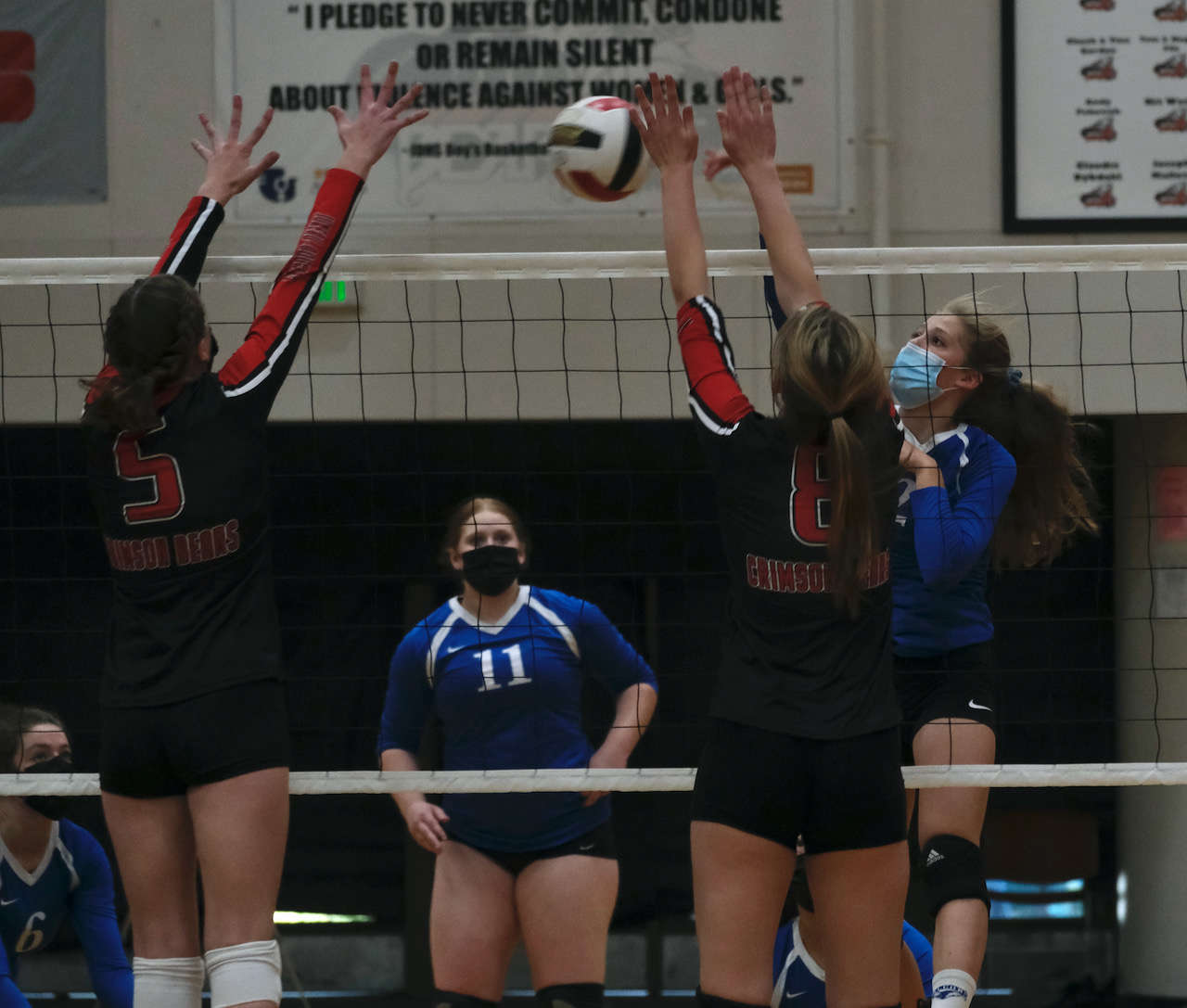