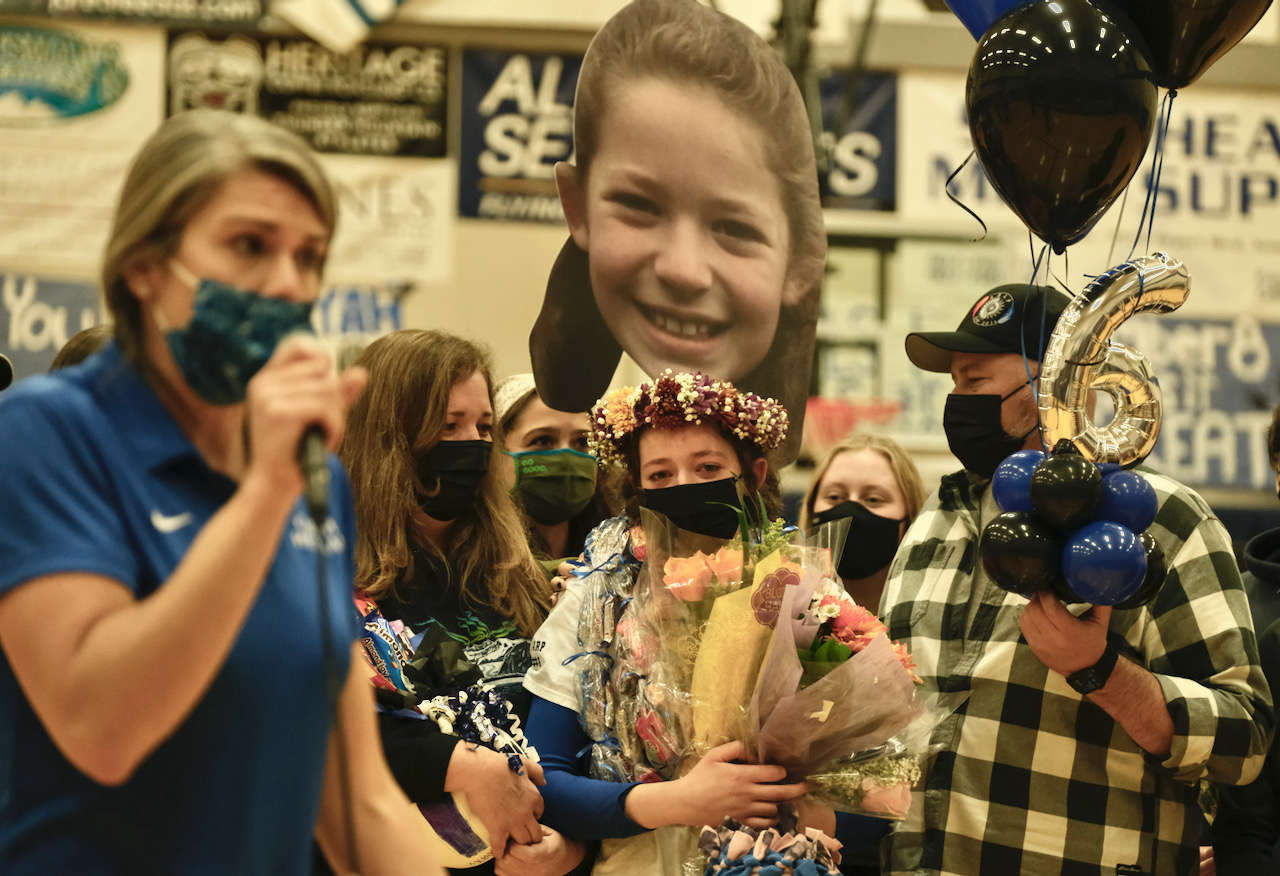 Juneau, Alaska (KINY) - With much pomp and circumstance, the Thunder Mountain High School Falcons senior volleyball players were feted at home on Friday with flowers, gifts and thanks and then proceeded to defeat a very game Ketchikan Lady Kings team at Falcons gym for the final time, winning 3-0 on set scores of 25-22, 25-16, and 25-20.

“It is a special night,” Falcons coach Julie Herman said. “We have been preparing for this as a program since the start of the season, just celebrating these kids that have worked so hard. I thought it was a really nice ceremony and then they went out and played real hard for us. Made us proud.”

The Falcons took a 5-0 lead with senior Molly Brocious at service in game one until Ketchikan junior Lindsay Byron stopped the run with a kill.

Falcons senior Sydney Strong answered with a kill of her own and served to 9-1 with an ace and a set attack by senior Riley Harp.

The Falcons regained possession on a Lady Kings service error for point 20 and senior Solveig Wolter hit a scoring attack for 21.

Ketchikan junior Alli Thomas killed point 13 for the Lady Kings and Brocious did the same for the Falcons for a 22-13 advantage.

Ketchikan sophomore Bella Westfall earned point 14 for the Lady Kings and junior Reilly Mccue put a tough serve across that the Falcons could only pass back and Byron added point 15 on another hard hit..

Strong hit a strong attack for Falcons point 24 but a mishit gave Kayhi 19 and possession. Thomas served an ace, Byron killed a shot and another Falcons mishit brought the Lady Kings within two at 24-22.

Set two opened with a Tuvaifale scoring attack and Strong served an ace and Kayhi mishit for a 3-0 Falcons lead.

Once again Byron found a seam for a Lady Kings point but Falcons junior Mallory Welling hard attacked three points in a row for a 6-1 advantage.

Kayhi answered with a tip shot by Byron and a hard swing by sophomore Bree Johnson to trail 6-3.

The sides would exchange small scoring possessions nine times until Falcons senior Anne-Alese Rentrop saved a shanked dig and sophomore Ashlyn Gates killed a shot for a 19-12 lead and Welling scored on two attacks for 21. A Lady Kings mishit gave the Falcons a solid 22-12 lead.

Johnson tipped a shot for the Lady Kings and Mccue served a point to trail 22-14.

Tuvaifale earned the Falcons point 23 but Kayhi sophomore Bella Westfall tipped a point and Johnson did the same to trail 23-16.

Brocious regained possession for the Falcons with an attack and Harp served over the game winner for 25-16.

“We were trying to come in confident, but not cocky,” Brocious said of the night. “And I think we executed that. I’m really excited to see what we can bring at regions. It was good. It was exciting with all the bleacher creatures, as we call them, to be here to support us.”

Set three featured four ties early as both teams had a renewed vigor at the net. The Falcons had a 7-4 lead with Welling on service causing two Lady Kings mishits.

Kayhi’s Thomas earned possession with an attack for point 5 but Strong earned the Falcons possession to lead 8-5.

A TMHS mishit put Kayhi sophomore Taylor Jackson at service and the Lady Kings would take a 9-8 lead.

Strong killed for Falcons possession and Brocious served a 10-9 lead.

Byron tied the score with an attack for Kayhi but a mishit gave the lead to the Falcons and Strong served to 13-10.

Both sides mishit for 14-11 and the Falcons’ Gates served out to a 20-11 advantage that included her ace and a Welling attack.

Byron swiped a shot across a Falcons block for Kayhi point 12 and then served an ace for 13 but three Kayhi mishits in a row put the Falcons on top 23-13.

The Falcons had their own mishit to give the Lady Kings point 14 and service. Johnson served the Lady Kings within three points at 23-20 with two defensive stops at the net by Thomas, an attack by Byron and a tip by Thomas.

A Kayhi mishit gave TMHS point 24 and junior Talita Toutaiolepo served the ball into a return that was handled by Wolter who set up a first pass at the net that Welling quick attacked over for the match winner at 25-20.

“I think we played really well,” Wolter said. “We definitely improved on the things we needed to work on and it was a really fun game.”

Wolter’s spirit was captured in a Viking hat she was presented with during senior ceremonies. The words “Beast of the Block” are written on the horns.

“The Viking hat is from my best friend’s mom,” Wolter said. “It’s kind of a running joke, I guess, because I am a blocker. Yeah, it was a really fun surprise.”

Wolter would garnish two blocks in the match. Gates had four blocks and Welling and Strong two apiece.

“I think one of the biggest things I liked about what we did from yesterday to today is you could see our confidence in playing,” Ketchikan coach Kevin Johnson said. “Playing yesterday, I don’t know what happened. We are just young. But today they came back, they played with some pride, they played hard. Julie (Herman) has a good group over there. That’s a great group of kids. I really want to recognize my opponent, too. The atmosphere that is created here, this is great, it is great for kids, it’s great for the sport. And in Ketchikan we’ve been down for a number of years, I think everybody knows that, but we’re coming. We’re getting there. Some bright spots that we saw tonight, I personally think, we saw some bright spots with some of our juniors really take on a leadership role tonight and really try to lead our team to a victory. That’s great. That’s incredible.”

The Lady Kings’ Byron, Thomas and Mccue have been on varsity since freshman year.  Unofficially Byron had 20 attacks and six kills; Thomas 15 attacks, five kills and three blocks; and Mccue had two aces as well as taking the lead in first passes. Johnson added 10 scoring attacks and Westfall two blocks among Ketchikan highlights in the match.

“I think the Ketchikan is a strong program and gets stronger every year,” Herman said. “Coach Kevin (Johnson) is doing a great job. They just kept pressing us and we had to do a couple switches in our lineup.”

The Falcons end their regular season 6-2 in conference. They swept Ketchikan on Thursday as well. The Lady Kings are 0-6 and get no rest, playing today (Saturday) against Juneau-Douglas Yadaa.at Kalé at 12:30 and 5:30 p.m. in the Crimson Bears den. JDHS senior ceremonies will be at 5 p.m. JDHS has a 4-2 conference record. These are the final conference games. The Region V tournament is Nov. 5-6 at Ketchikan. 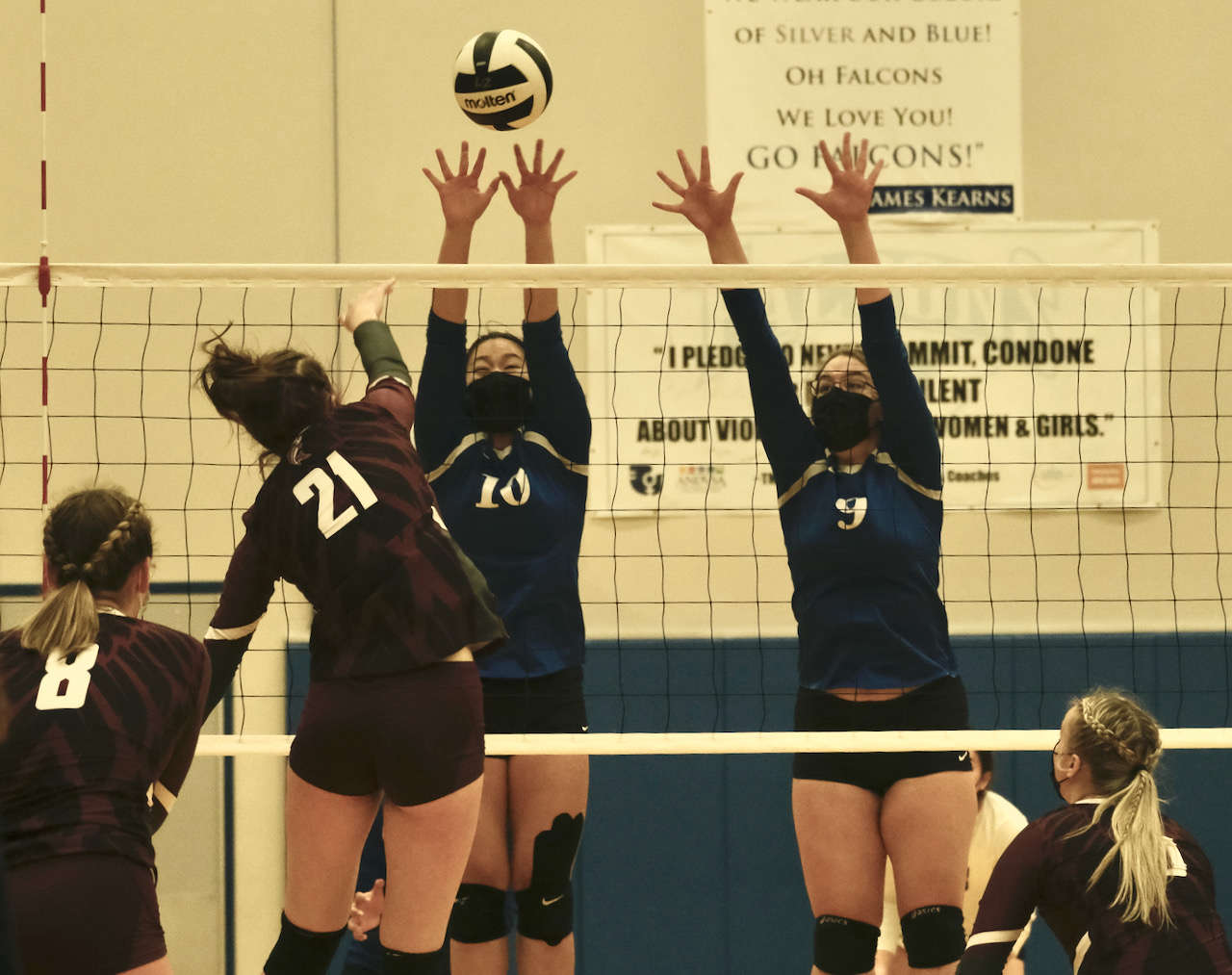 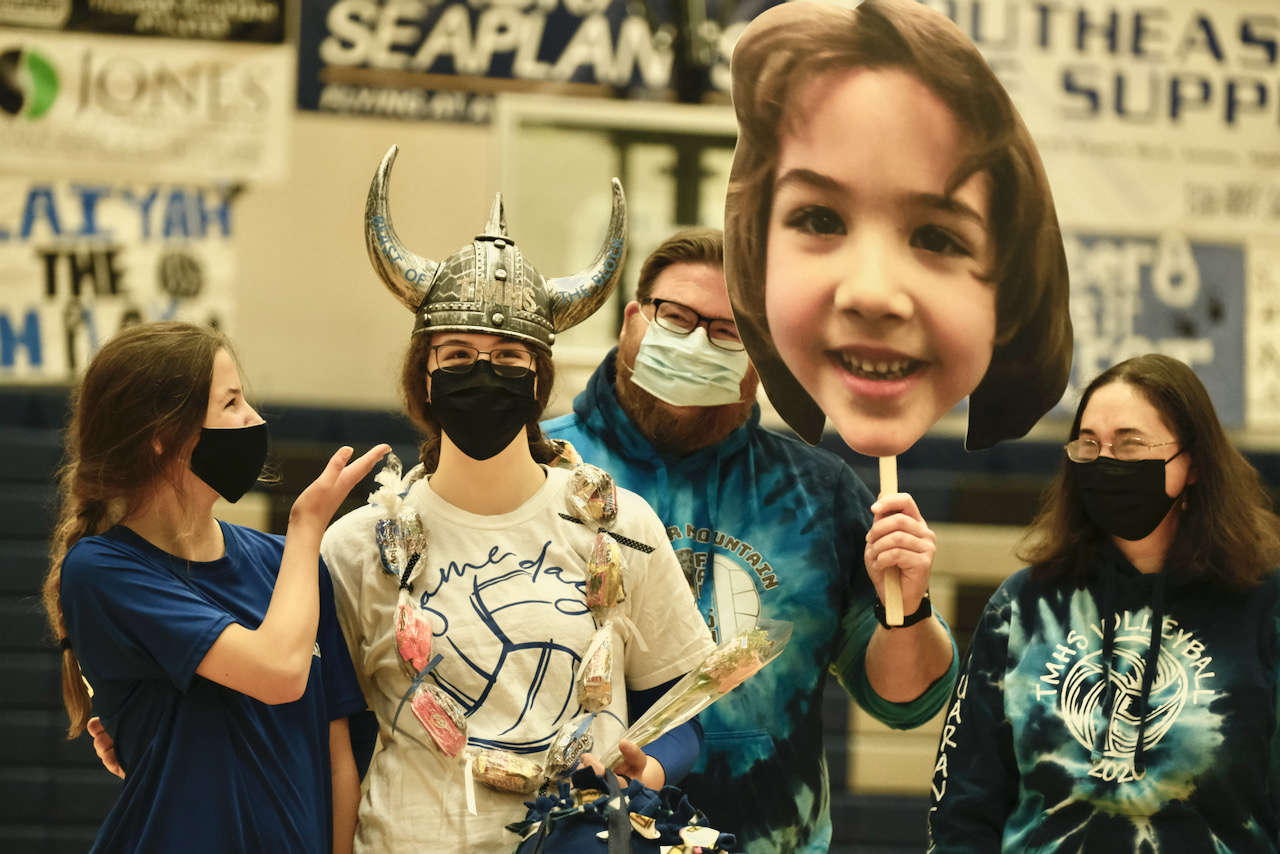 Above - Thunder Mountain volleyball senior Solveig Wolter, the "Beast of the Block," during Falcons senior appreciation on Friday. 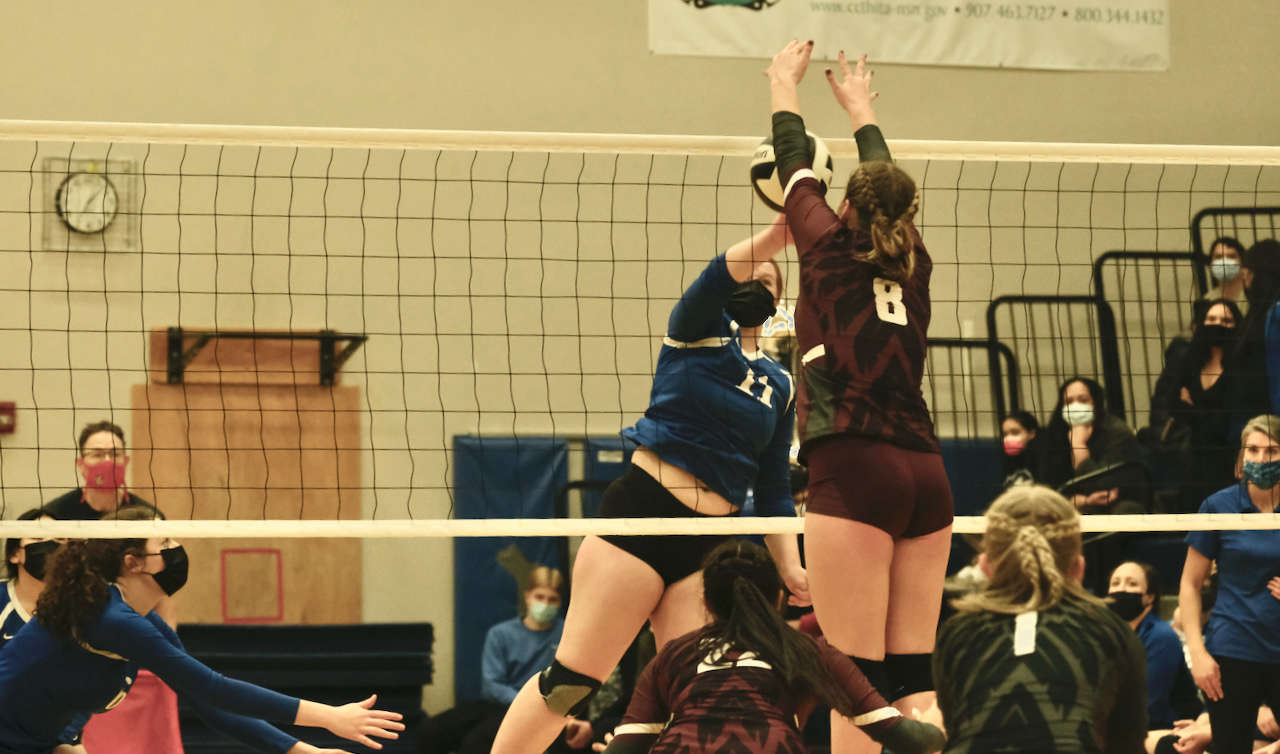 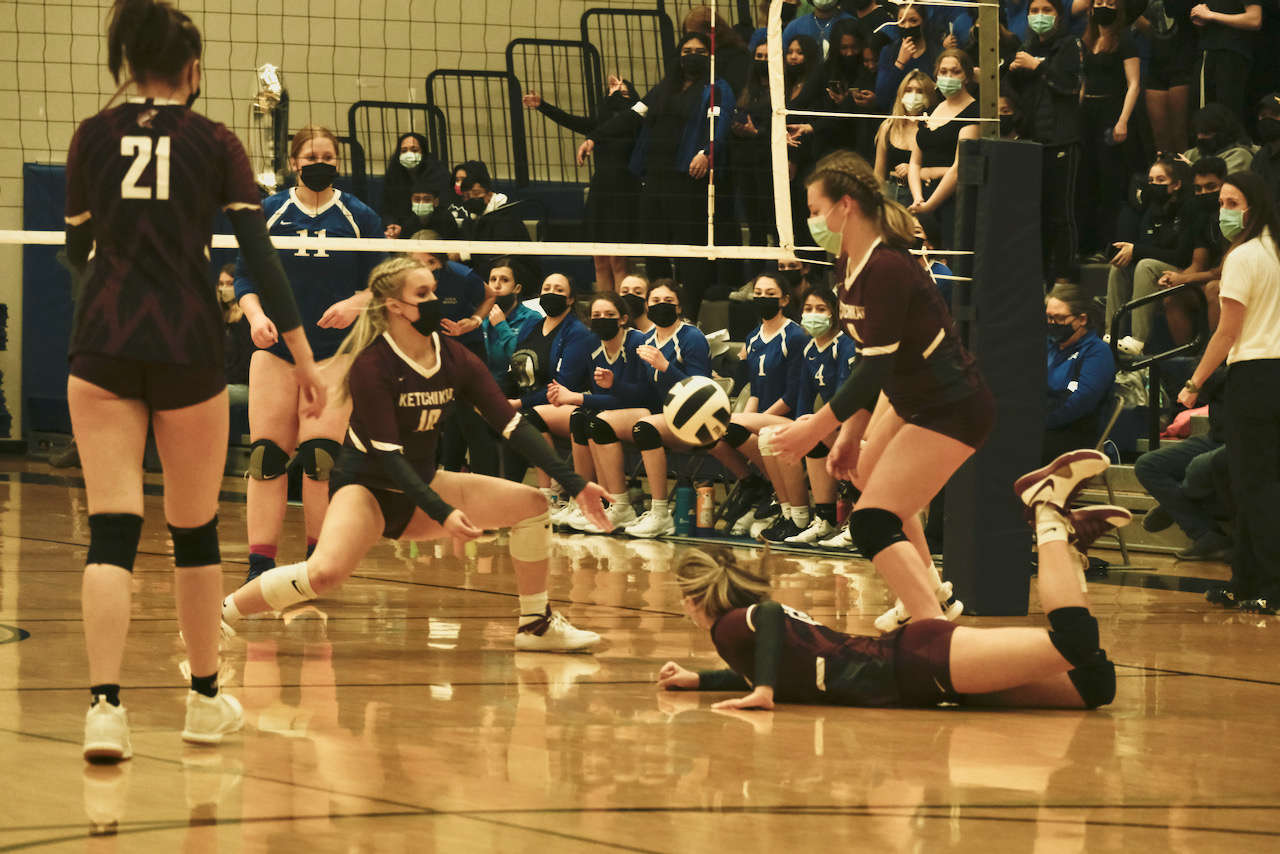 Above - Ketchikan players react to a shot. 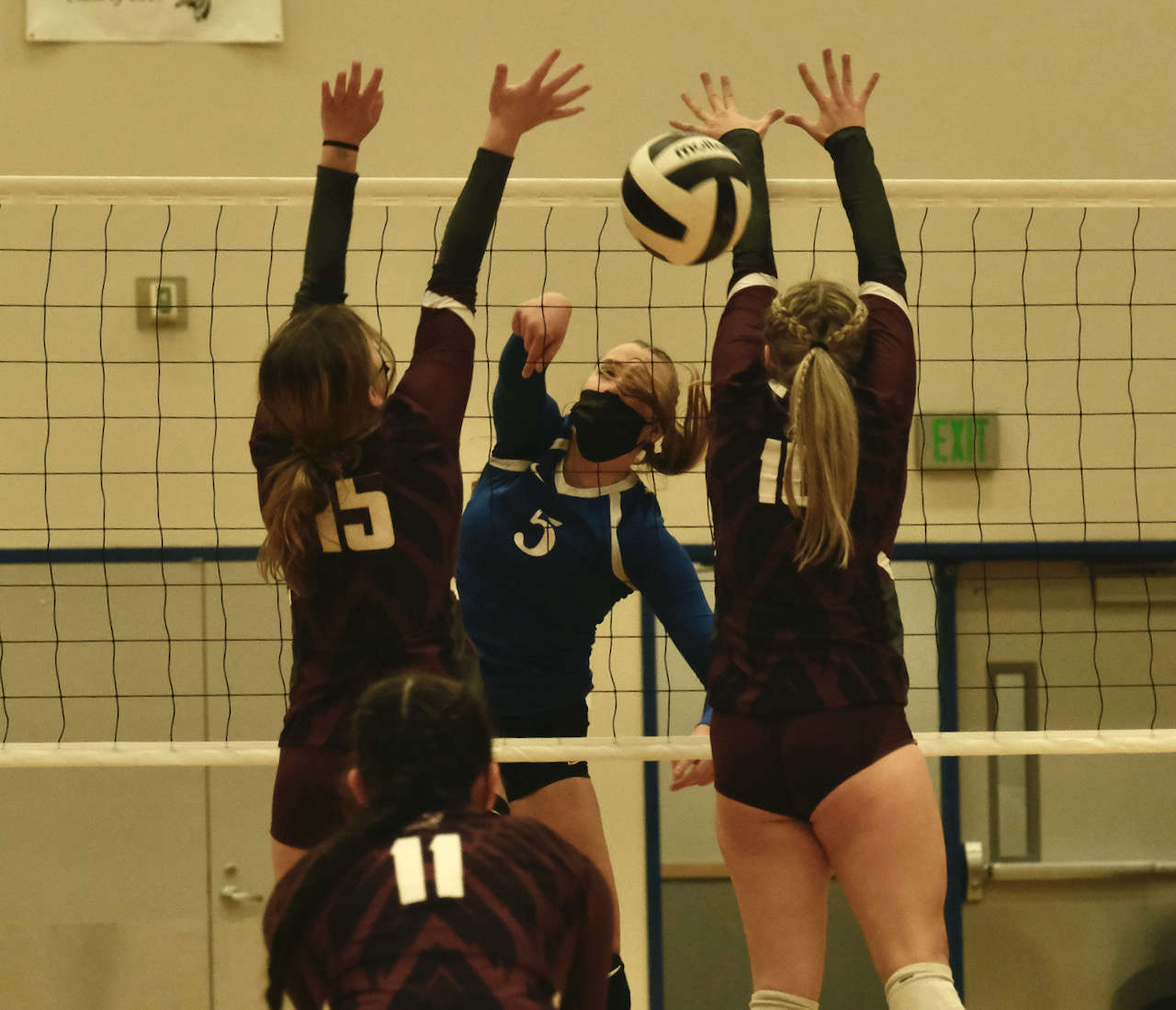 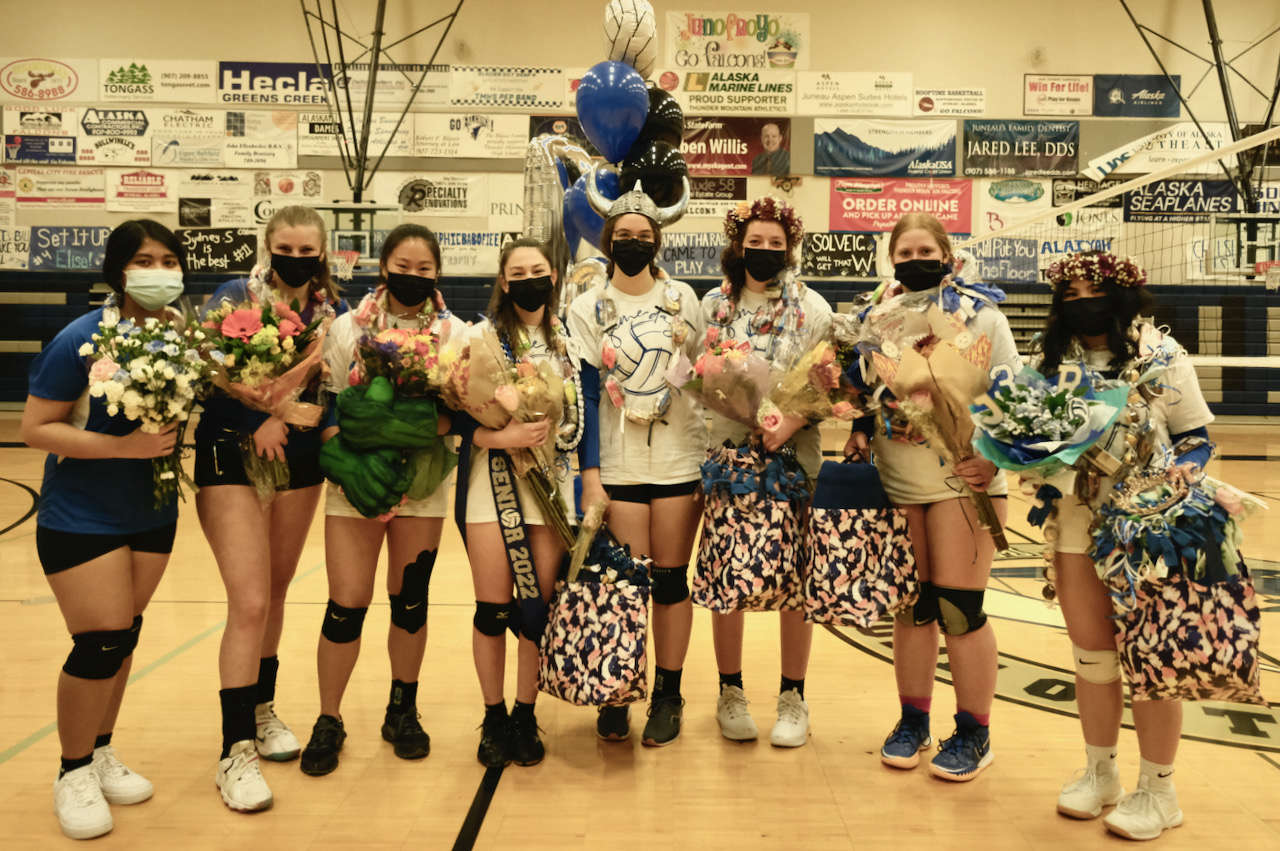