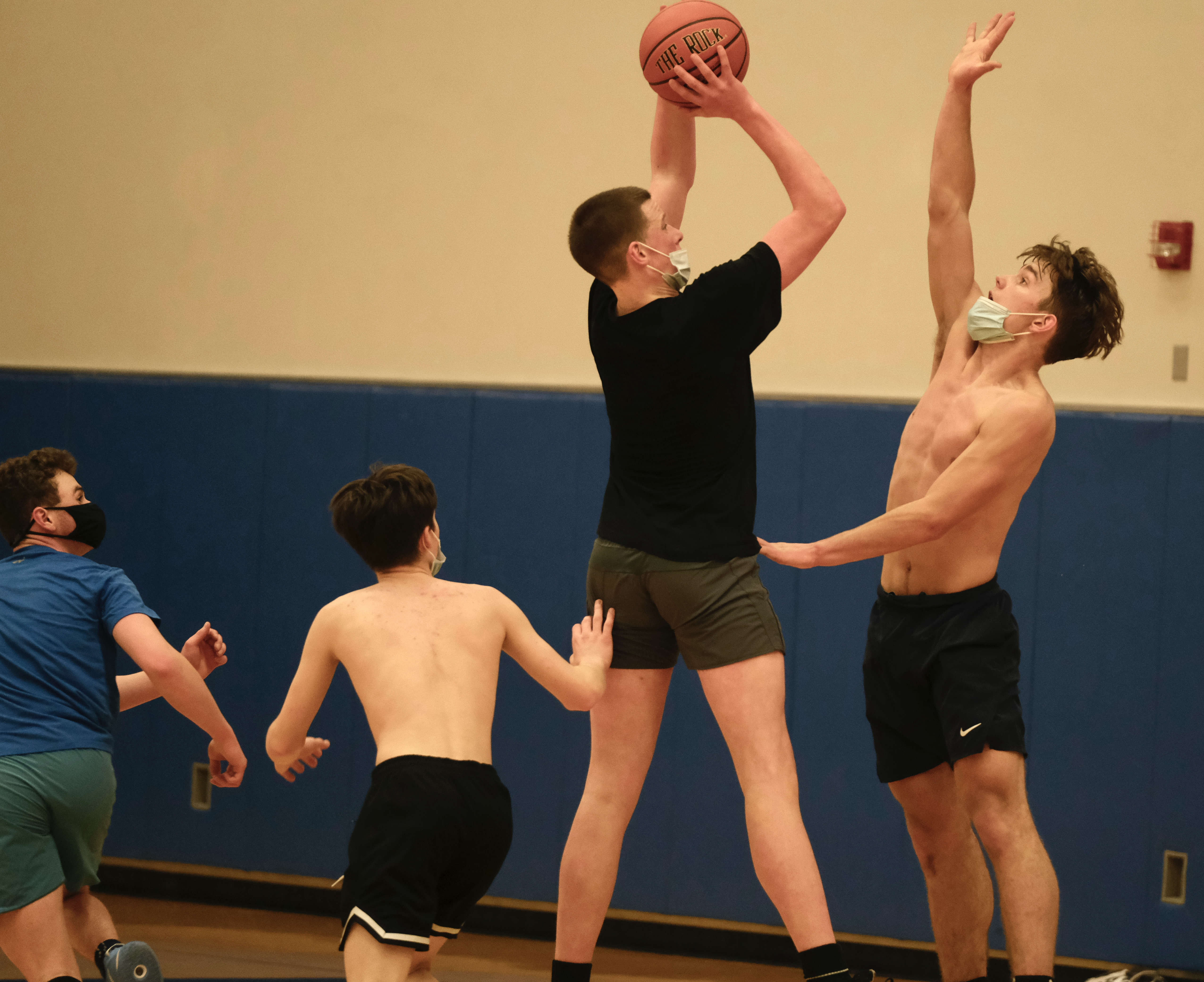 TMHS sophomore James Polasky shoots over senior Wallace Adams in a practice drill last week. The Falcons fell to Chugiak in their opening season game on Thursday in Anchorage.

Juneau, Alaska (KINY) - The Thunder Mountain Falcons boys basketball team went down to the wire against Chugiak in their season opening game at the 41st Annual Service Cougar Tip Off Tournament at Service High School on Thursday, falling 52-49 to the Mustangs.

“Close game, a lot to learn from when a first game is that close,”  Thunder Mountain coach John Blasco said.

Sophomore Sam Lockhart scored 27 points to lead the Falcons including 10 points in the first quarter and 16 in the first half, with three shots from beyond the arch.

“Sam had a great first game,” Blasco said. “We were definitely trying to keep feeding him the ball, get him open.”

Chugiak opened a 42-32 lead after three quarters and the Falcons, who played man-to-man defense throughout, resorted to full court pressure in the final eight minutes of action.

“We decided we needed to apply a little bit of pressure,” Blasco said. “So we kind of sped up the pace to see if we could pick up some turnovers, which we did and capitalized.”

The Falcons cut into the lead and ended up having to foul stop the clock. The Falcons had played such good defense through the game that they only had three fouls showing in the second half with a minute left, meaning they had to foul quickly to get the Mustangs to even shoot free throws.

“I think we learned that stepping up the defensive pressure in urgency definitely gets teams to do things that they might not be comfortable with,” Blasco said.

With 13 seconds left in the game and trailing by three points the Falcons ran a play to either have sophomore Thomas Baxter or Lockhart get an open jump shot to tie the game. Lockhart drew a double team and Baxter was open for a moment but his shot rimmed in and out.

“We made a nice run,” Blasco said. “Having an opportunity to tie it up was definitely exciting.”

“This is a year we have to figure out who we are going to be and what our identity is,” Blasco said. “We have seniors and sophomores. We were led by three sophomores today but our seniors definitely played key roles but they didn’t show up in the stat book.”

TMHS seniors Wallace Adams, Isaiah Nelson, Matthew Johns and Matthew Harstock were noted for their play on the defensive end and rebounding.

“Wallace was key playing defense and rebounding and is also a big creator for guys in terms of setting screens and getting guys open,” Blasco said. “Isaiah and Johns worked the point position and also defensively guarded point guards and applying pressure late in the game with different presses. Same with Hartstock, he brings a lot of defensive energy. It is stuff they are doing on the other end that doesn’t go in the stat book.”