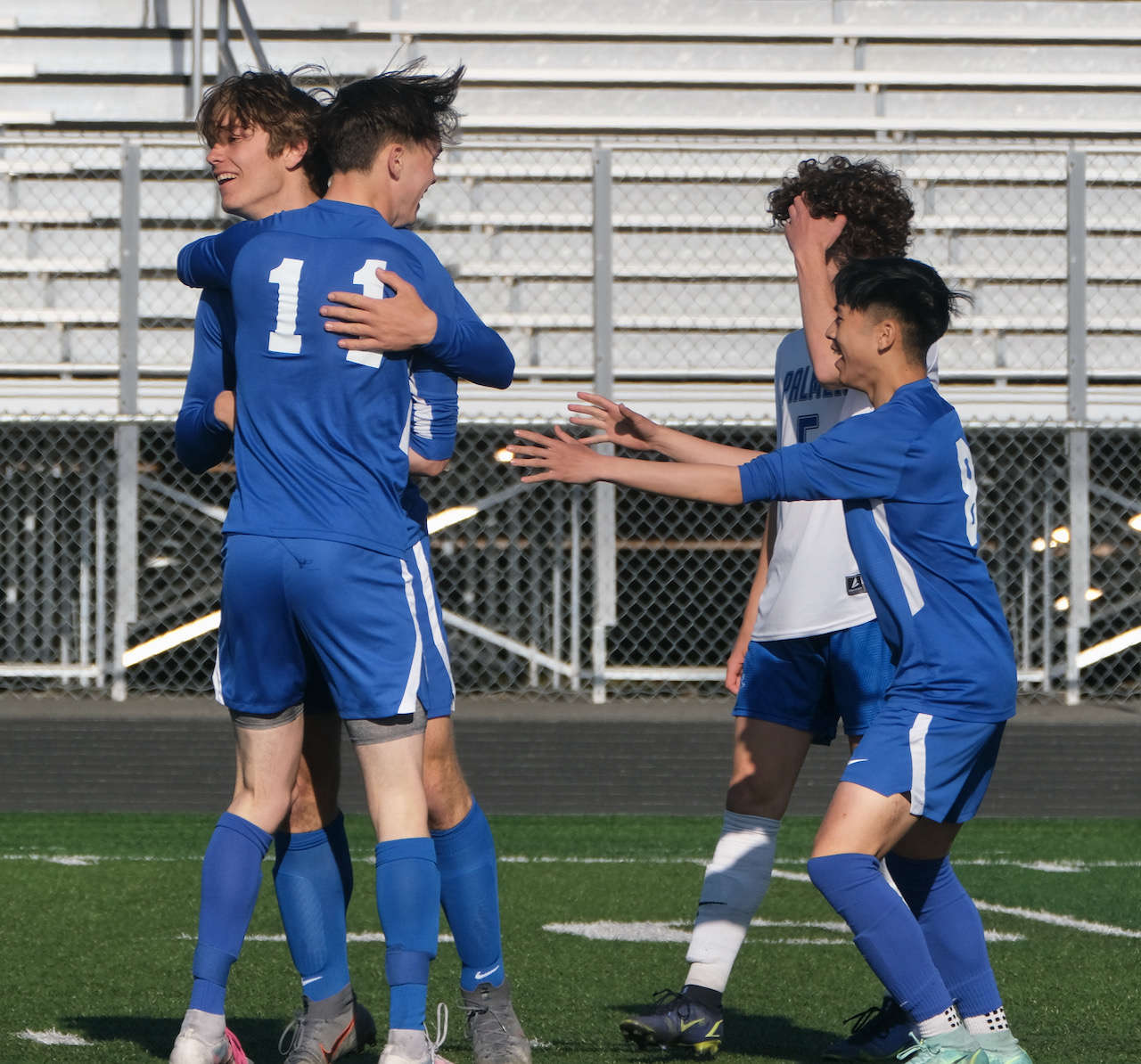 TMHS senior Talon Briggs is congratulated by senior Wallace Adams after Briggs scored in the Falcons opening 3-1 win over Palmer at the state soccer tournament, Thursday, in Anchorage. (Klas Stolpe/KINY)

They did it twice on Thursday and Briggs scored a hat trick to boot as TMHS defeated the Palmer Moose 3-1.

“Me and Talon have been playing together since we were little,” Adams said. “And I’ve always been the one to set him up.”

Adams smiled and laughed, looking over at Briggs.

“He looks good but I’m the one giving it to him so I’ll take some credit,” Adams laughed. “But seriously, he had a great game. Talon Briggs scored three.”

The first goal came just 20 seconds into the match with the Falcons starting the possession and Adams lifting a through ball into the box and Briggs putting it to the back of the net.

The duo combined again on a similar play with 23 minutes remaining in the first half for a 2-0 advantage.

Briggs third goal came with nine minutes lift in the first half. TMHS senior Darin Tingey plays a ball that forced the Palmer keeper to come out of his box. The Moose keeps tried to kick a ball outside his box and, instead, Briggs gave up his body to deflect the kick from 15 yards out back into the Palmer goal.

“We just came out hot,” Briggs said. “For most of our team it is our last, hopefully, three games that we play. In the hotel room we have just been keeping a positive mindset and it showed in the first half. We were all a little bit sad just because it was our last day of school for at least the people in my room. We were just trying to make the best of this. So this is what we got.”

Palmer scored their lone goal nine minutes into the second half. Moose sophomore Fischer Adams hit a free kick over the Falcons wall and TMHS senior Miles Keeper blocked the curing kick but the rebound fell to Palmer freshman David Beames who hit it in.

Peterson had four quality saves in the match.

TMHS had six more shots on goal in the first half and another seven, at least, in the second half, including two more in stoppage time.

“We came out and scored in the first minute,” TMHS coach Tim Lewis said. “We came to play. We didn’t change anything. We just played our game. As long as the kids are having a blast, I am having a blast. I think they had fun, so we’ll play again tomorrow and hopefully have some more fun.”

When Adams was asked when the first time he set Briggs up he replied with a laugh, “On or off the field? I’ve known him since he was a baby but I think Whitehorse, JSC, probably eighth grade I think it was the first time.”

Adams added, “We really just have to play as a team. I think moving up and down the field and transitioning as a unit is the biggest thing we need to work on. And just communicating. You hear me out there yelling at everybody but if we can get that to be a team thing I think it will help us move forward as a team.”

The No.3 seeded Falcons are moving forward to Friday’s semifinal match against the winner of  No.2 seed Grace Christian and No.5 seed North Pole. The No.6 seed Palmer plays in a consolation match Friday. 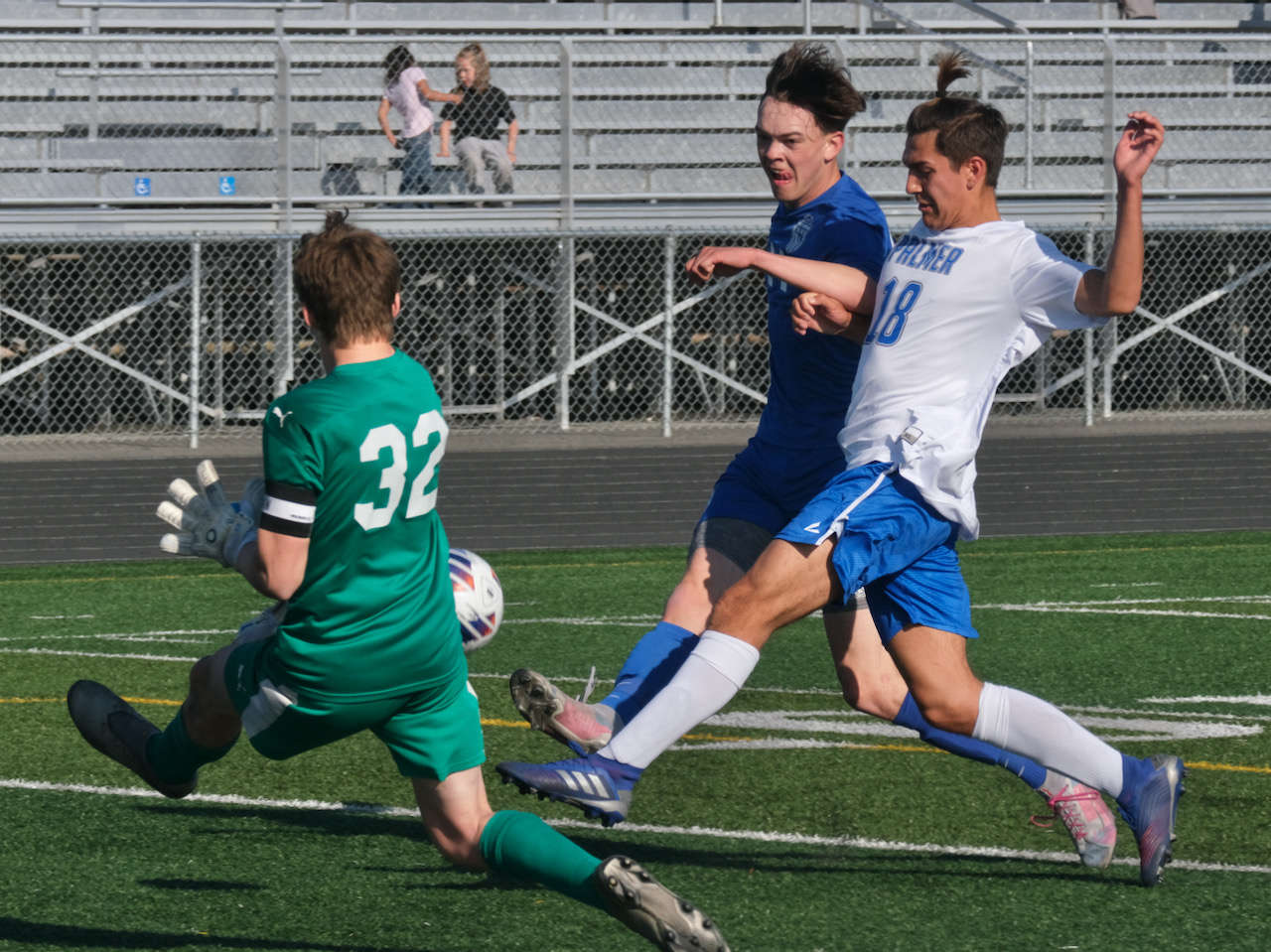 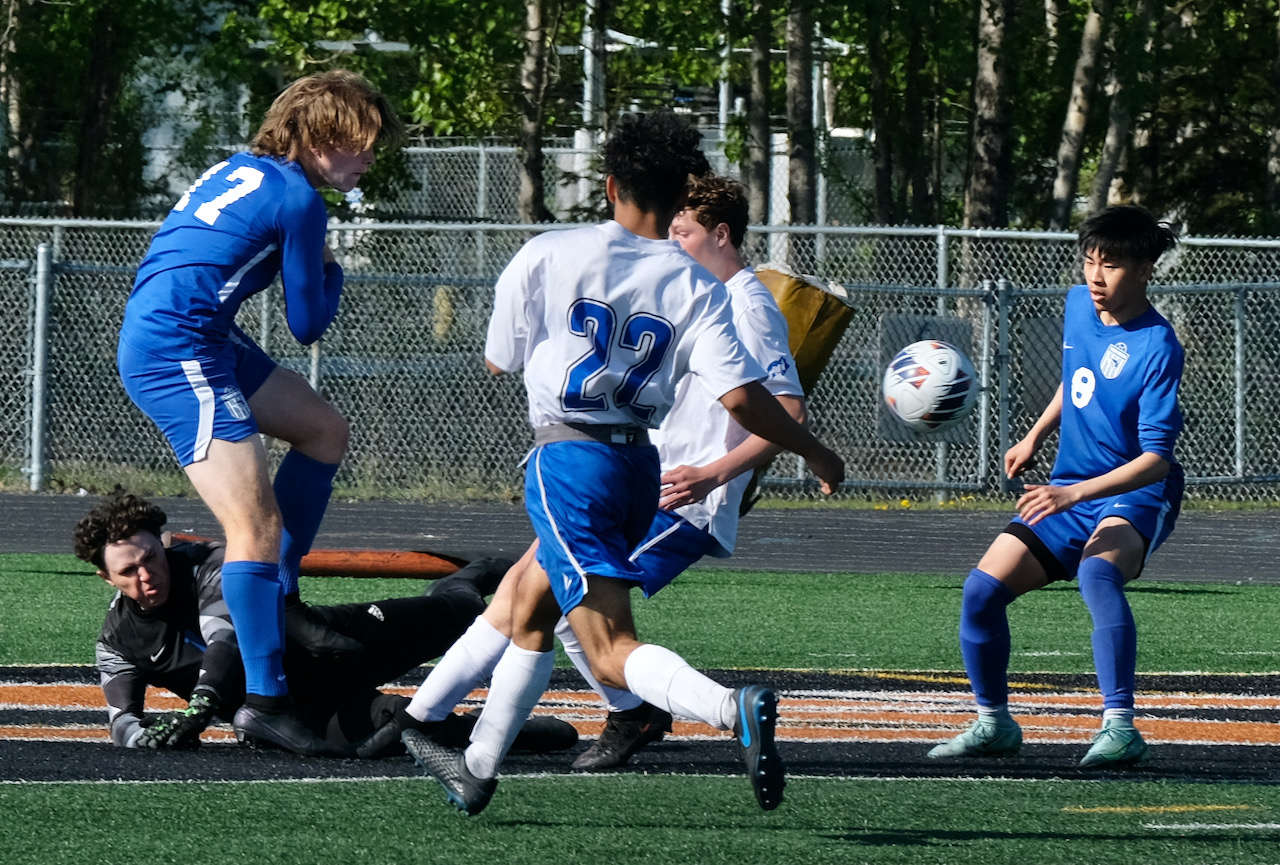