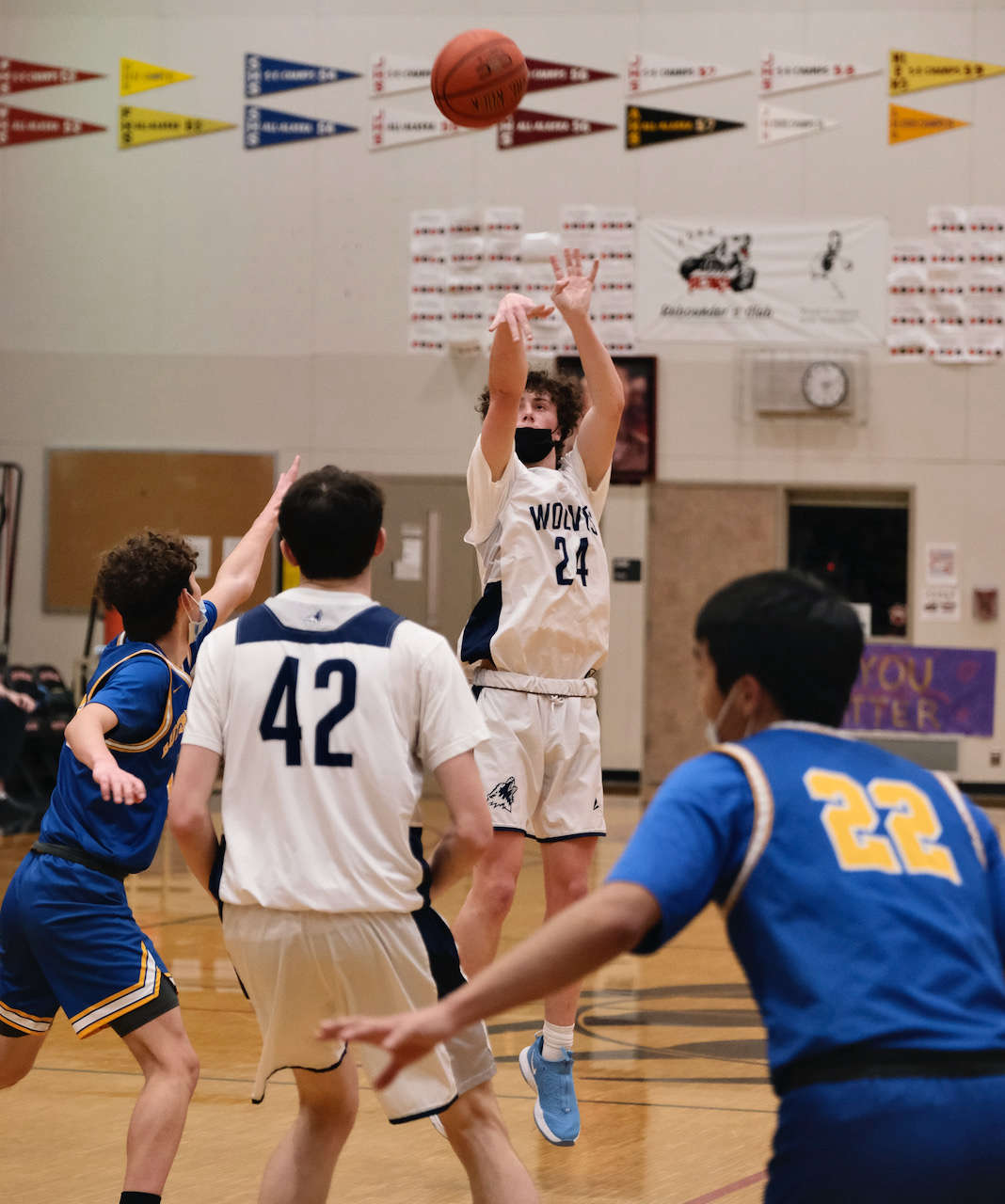 Juneau, Alaska (KINY) - The Eagle River High School Wolves boys basketball team were deadly from the field in their 73-21 win over the Kotzebue Huskies in the final day of action at the Princess Tours Capital City Classic in the Juneau-Douglas High School: Yadaa.at Kalé gym on Thursday.

“It was very positive,” Eagle River coach Chris Blake said of the team’s third win in a row in the tournament. “Obviously we were playing the three o’clock game for the championship. I think everybody was kind of expecting Juneau and West would be playing for the championship tonight at seven so we used that for a little bit of motivation. It was a good start as we go into conference play next week. It is not a fluke, I will say that. We’ve been working hard. These guys are tough and I think we are going to turn some heads.”

The win gave Eagle River an undefeated tournament record and the championship. The Wolves had beaten West Anchorage 62-57 on Monday and Juneau-Douglas 70-62 on Tuesday. Wolves junior guard Spencer Love won the three-point contest on Wednesday.

“It feels good,” Love said. “Eagle River hasn’t really won things in the past few years so I think it is a good start for this organization. It was a good for us to win in the tournament and come out and show people what Eagle River is all about.

The Wolves sank five shots from beyond the 3-point line in the first quarter as they opened a 22-8 advantage. Love tallied three in the first eight minutes of action and seniors Roland Burley and Cohen Jefferies one apiece.

Kotzebue senior Aiden Ivanoff also canned two shots from past the arch in the stanza.

In the second quarter the entire roster of Eagle River spent time on the floor in a pressing defense that opened up a 46-13 halftime advantage.

“In every game we had a different guy step up,” Eagle River coach Blake said. “Our big guy (Stephen Farthing) went out early in the tournement and Charlie (Wallace) played a heck of a game. The next game he got in foul trouble and JaKen (Howard) stepped up and was phenomenal. And of course Spencer (Love) has been pretty consistent throughout the tournament. The biggest take-a-way is that Spencer is probably one of the better shooters in the state and should definitely be on people’s radars, he’s tough.”

The torrid Eagle River shooting put the game into a running clock situation as the Wolves went up 69-18 after three quarters of action as senior Benni Collins hit three from past the arch, Love two more from distance.

“It’s a different level as far as how physical it is,” he said. “Especially the guard play, same thing down low, but with the guards you can’t just go where you want to go like in the lower leagues. It was a good experience, it will get us tougher in the long road. Juneau was fun. It was beautiful. A couple year’s ago we went to Valdez and that was nice, but Juneau was even nicer.”

Kotzebue also lost to Juneau-Douglas 76-39 on Monday and 73-25 to West Anchorage on Tuesday.

“It was fun,” Kotzebue coach Westlake said. “Quite the learning experience for our boys. I don’t think we have played very many 4A teams. So to come down here and play three 4A teams was a good experience, a tough one, but it will help us later on down the road in our league play.” 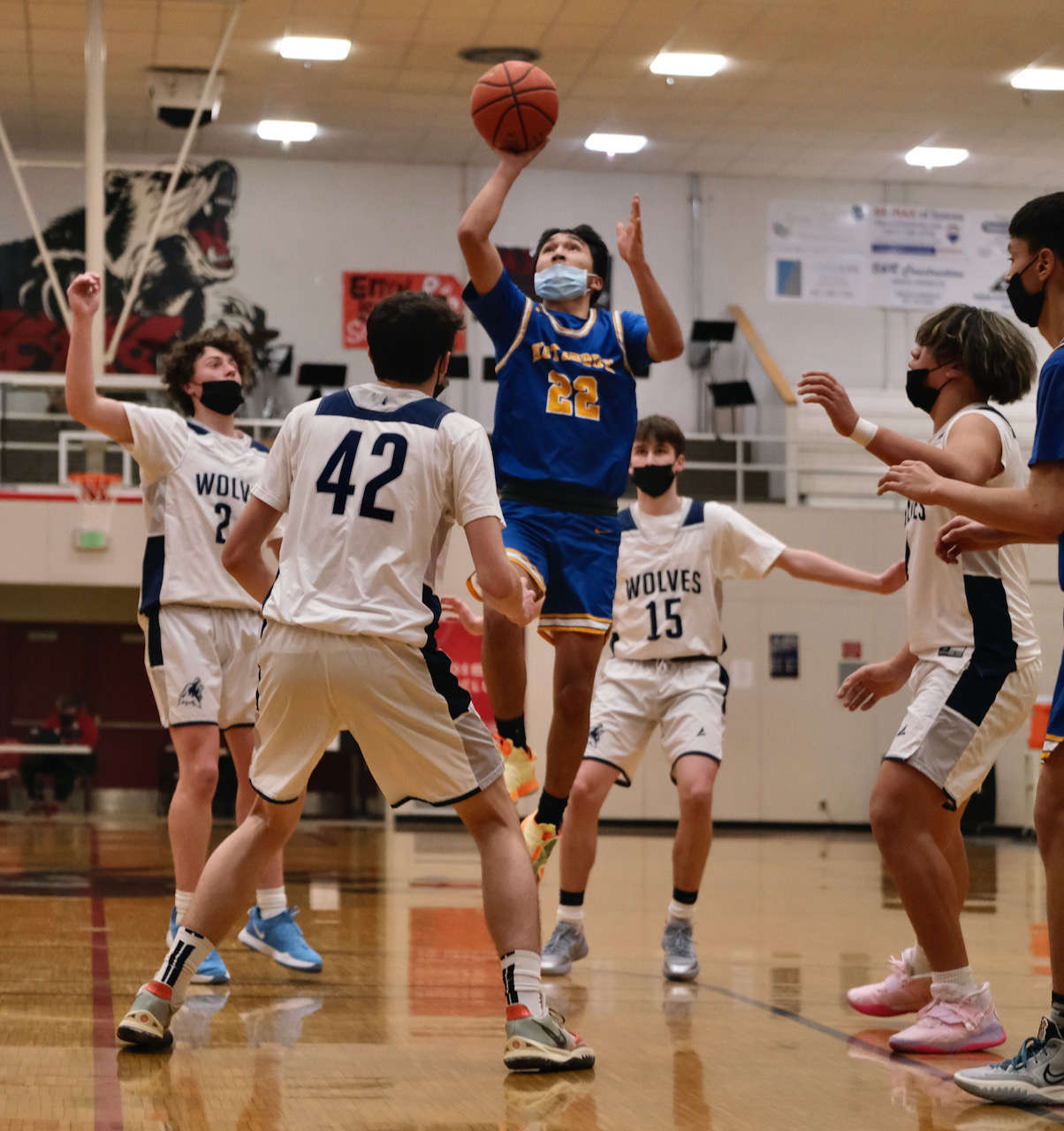