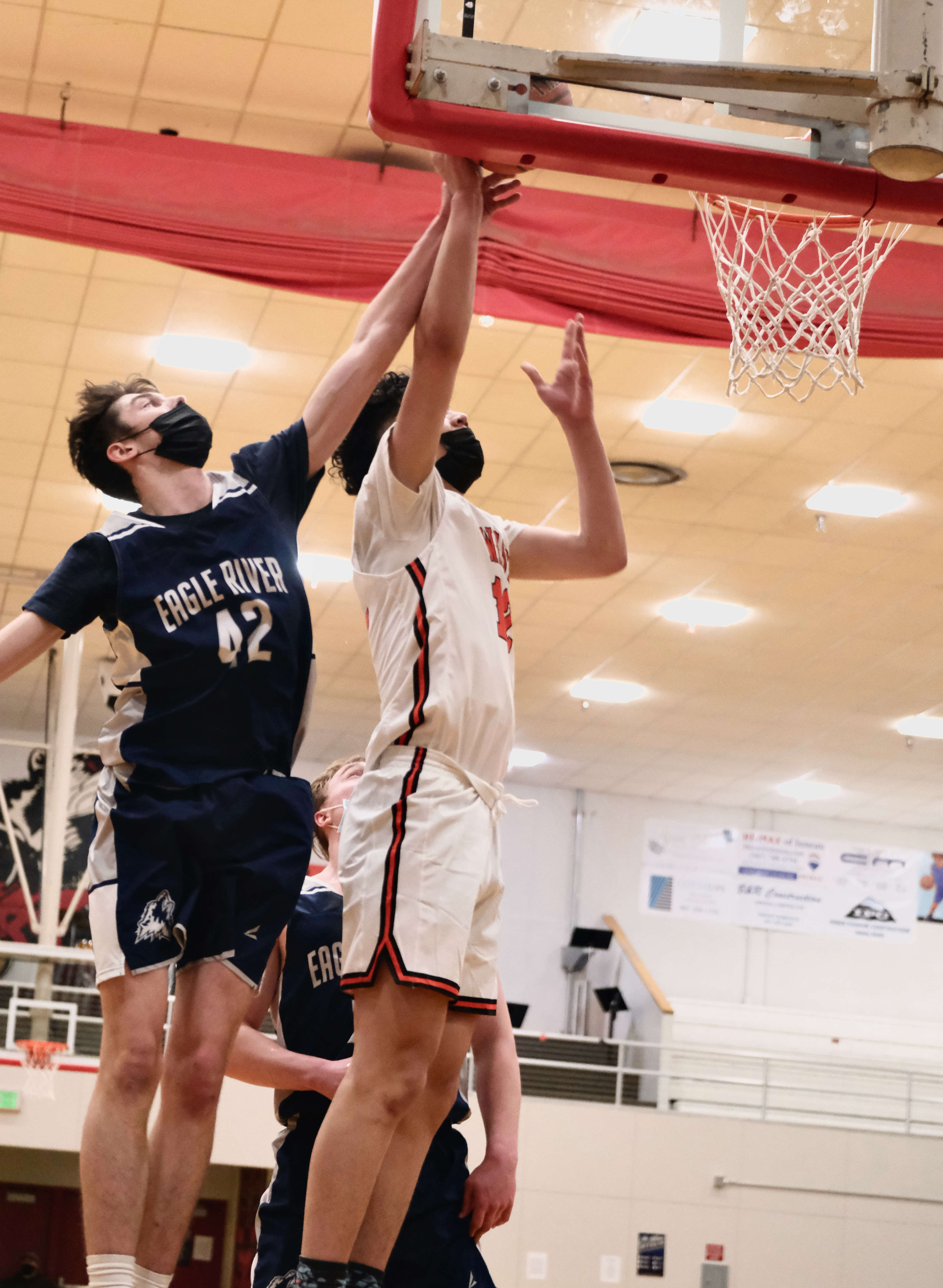 Juneau, Alaska (KINY) - A new culture of basketball has started at Eagle River and the Wolves showed their meddle in an athletic and physical 62-57 win over the West Anchorage Eagles in the Princess Tours Capital City Classic at Juneau-Douglas High School on Monday.

“It was huge,” Eagle River coach Chris Blake said. “Eagle River has struggled a long time and these guys are finally hungry. We are trying to change culture a little bit and I think we did that today. West is very good, Josh (Muehlenkamp) is obviously a really, really good coach. So it’s a huge win going into a big game tomorrow for sure.”

West took an early 12-8 lead after eight minutes of play behind a pressure defense and slashing offense.

Eagle River center Stephen Farthing went down in a rebound pile roughly four minutes into opening action and the seven-foot all-state player would be lost for the game. In his absence the Wolves looked to a team rebounding format and senior Charles Wallace responded with 10 boards (unofficially) on the night.

To get to halftime the Wolves had to control the fast pace being ignited by the Eagles.

Wallace tied the game at 15-15 on a free-throw and the Wolves had their first lead at 18-15 after free throws by Benni Collins and Miles Harlan.

West came right back behind a shot from beyond the arch by Dean Laxa and then a Laxa layup. The teams would exchange steals and turnovers throughout the game but rebounding would be key. Eagle River’s Lerch was fouled on a board and hit both freebies and Wallace blocked the next West shot for ball control and the Wolves went into the half up 31-26.

“We preach everyday ‘we before me’ so that’s tough when your seven-footer goes out,” Eagle River coach Blake said. “But we got a bunch of guys that are hungry and ready to go. We preach everyday that if somebody goes done everybody else is there to pick him up. That’s what we did today. Something for Eagle River fans to be proud of.”

West regained the lead with 2:42 remaining in the third quarter as Julius Adlawan hit back-to-back buckets for a 35-34 advantage. The teams would tie the score three more times until Eagle River’s Spencer Love scored off of any out of bounds play under the Wolves hoop with the third quarter ending for a 44-42 lead.

Eagle River would not relinquish the lead in the fourth quarter but West pulled within a basket on numerous possessions.

With 25 seconds remaining in the game West’s Laxa hit from beyond the arch to pull within 57-55 but Wallace countered for Eagle River with three free-throws in back-to-back possessions for a 60-55 lead.

West’s Willie Zanora drove the length of the floor to cut the lead to 60-57 but Eagle River’s Love hit both ends of a one-and-one for the final tally.

“In spaces we played pretty well,” West coach Josh Muehlenkamp said. “In spaces we passed and we moved and we cut and we got some easy shots and some good looks. We didn’t rebound very well, we turned the ball over like we wanted to give it to them and that hurts. The team that usually handles the ball better and shoots the ball better and rebounds, you take care of those three things and you are usually successful. We didn’t take care of those things. And Eagle River did a great job. They made their free throws, they got back and they didn’t allow easy baskets. So it was a good win for Eagle River.”