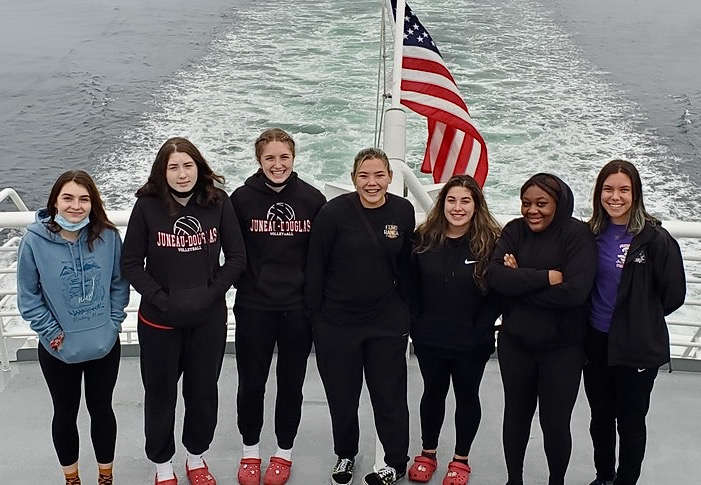 Juneau, Alaska (KINY) - The Juneau-Douglas Yadaa.at Kalé Crimson Bears volleyball team will play their final two matches of the regular season Saturday against Ketchikan at JDHS with varsity game times at 12:30 p.m. and 5:30 p.m., with special senior honors prior to the second match.

“We are excited to play Ketchikan again,” JDHS coach Jody Levernier said. “They have a pretty good team. We always have to be playing our best. We really need to work on our movements, our defense. That is what we have been working on this past week. Not standing still and being ready for the next play and just keeping our heads in the game and keeping positive. And they really just need to go out there and have fun and enjoy the game that we spend so much time working on.”

The Crimson Bears will hold their senior night at 5 p.m. Saturday before their second match.

“It’s exciting to celebrate the girls that have been playing for us and to be seniors,” Levernier said. “And it’s sad that their season is coming to an end and I’m sure there will be tears.”

Adams said her favorite food is empanadas and after high school she hopes to continue volleyball at a community college.

“Something people don’t know about me is that I am Latina,” she said. “Yeah! My mother is from Argentina and met my father at college in Missouri. She played field hockey and he played soccer. He said ‘I want to go to Alaska,' and she said ‘I’ll go with you.’ Pretty cool.”

Newman said her favorite food is pizza, “even though that is pretty basic.”

She plans to go to college and study political science or something in the governmental field.

“Something people don’t know about me is that I am pretty creative,” she said. “And in my free time I love to paint and draw and stuff like that.”

Bruno said her favorite food is halibut tacos and she is looking at attending the University of Alaska Fairbanks.

“I would like to get a degree in international affairs,” she said. “Something people don’t know about me is that I have lived in three places in southeast Alaska - Sitka, Gustavus and Juneau.”

Sanford said her favorite food is chocolate chip cookies and she plans to play volleyball at a junior college after high school.

“Something people don’t know about me is that I love to play cornhole with my family,” she said.

Don said her favorite food is Thai, especially Pad Thai, and after high school she wants to study environmental sciences in a European country.

Iona said his favorite food is pizza and after high school he wants to go to school for nursing.

“Something people don’t know about me is that I am a manager for the JDHS volleyball team,” he said. “And I also like volleyball.”

The Crimson Bears are 4-2 in conference,Thunder Mountain is 4-2 and Ketchikan 0-4. The Region V Tournament is Nov. 5-6 in Ketchikan.