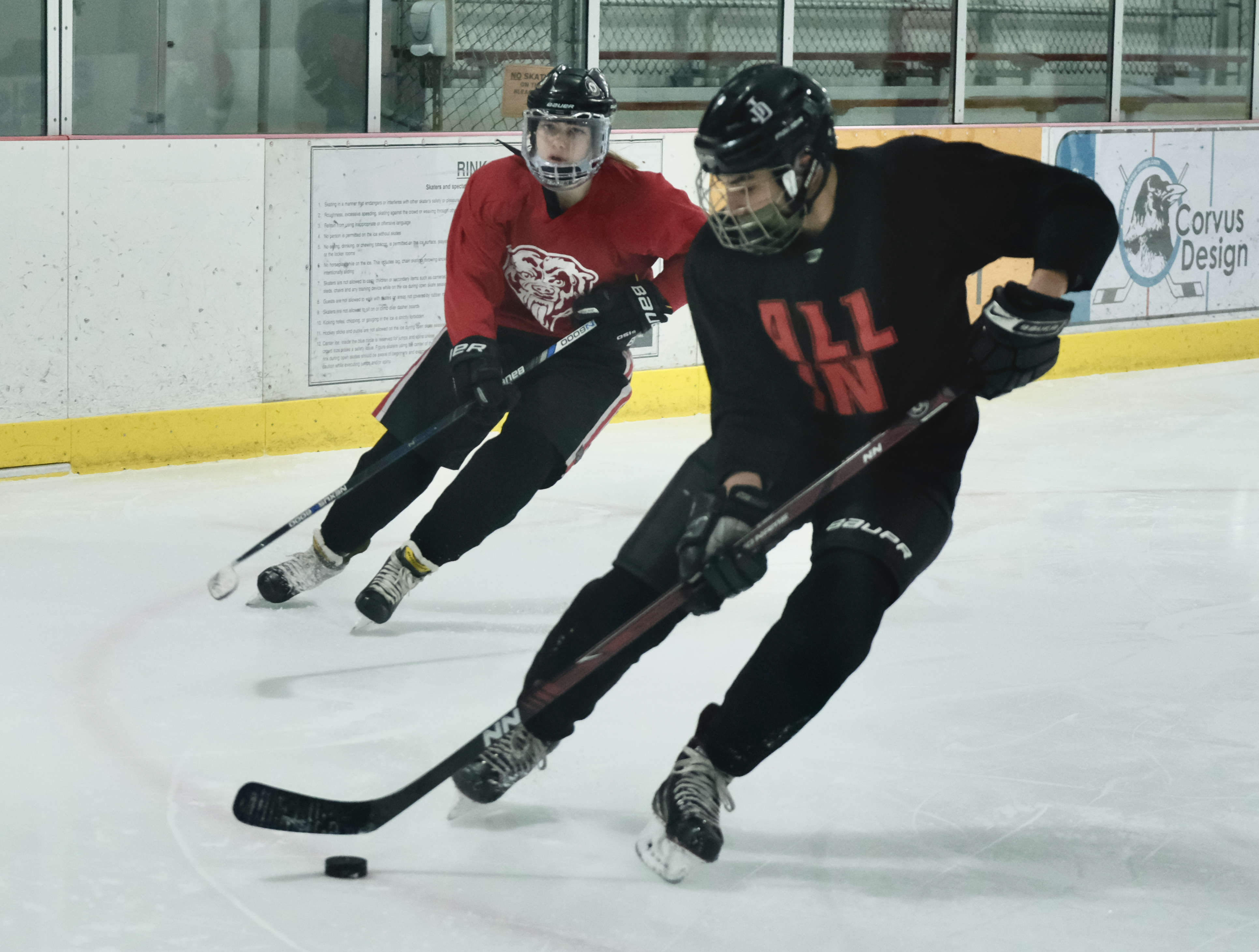 Members of the JDHS Crimson Bears hockey team are shown in practice before their season opening road trip to Palmer. JDHS won two games and lost one on the trip.

Juneau, Alaska (KINY) - The Juneau-Douglas Yadaa.at Kalé hockey team returned to competitive ice last week for the first time in nearly two years, putting in a solid showing in three games on the road against Wasilla, Homer and Colony at the Palmer Invitational, and traveling home with two wins, one loss and a start that last year's seniors missed out on.

“Definitely the nervous angst was there but it helped us realize how much we missed it,” head coach Luke Adams said. “Coaches, but also those returning players, especially the seniors, once we got on the plane and flew out of Juneau, you could see all the kids take a deep breath and realize it was going to happen and they were pumped. They were focused. It took us a game to get under our belt to realize the tempo we had to play at again but the kids adjusted well and ended up getting two wins out of the trip.”

The Crimson Bears, members of the Division II Railbelt Conference, opened their trip with an 8-3 loss against DI Mid Alaska Conference Wasilla on Thursday but found the opponent's net in each of the three periods and did not flinch against the seasoned Warriors.

“We all knew they were going to be good,” Adams said. “They definitely had a big team with a lot of strength and a lot of speed but no matter what we kept fighting through it and eventually got a few goals to show that we can compete. We let a few in that probably we would like to have back, but that’s the nature of the game and the nature of the first game of the season.”

Senior Joey Meier scored the first goal of the season for the Crimson Bears with 3:06 remaining in the first period, assisted by freshman Dylan Sowa and junior Lake Bartlett.

Bartlett scored for the Crimson Bears at 1:57 of the second period, assisted by senior Colton Johns and junior Brandon Campbell.

The Crimson Bears final goal came at 4:22 of the third period by senior Anna Dale, assisted by Bartlett and senior Illya Wallace.

“I just like how we adjusted all around,” Adams said. “Both of our goalies got an opportunity to play, including freshman Caleb Friend… he battled the whole time, learned some quick lessons on the pace of the game and speed. It was positive for our new freshmen to get some experience but also for our sophomores  who didn’t get a game last year… Our kids just kind of kept the focus moving forward. We made some adjustments and game two was a different story.”

“It was closer than the score,” Adams said. “Our kids just kept working a little longer than Homer was able to and that’s a tribute to the depth we have this year. We put away some good opportunities in that game that were timely and we had some outstanding goaltending by Braydon Baxter to hold us in. It takes everybody on the team to make those types of wins happen.”

That would be the only Mariners scores of the contest as the Crimson Bears shut down the ice.

“That is one of the practice focuses we have this year is competing for the entirety of the game,” Adams said. “All three periods. Even though we went down quickly our kids never lost a step or a beat. They knew they were going to be able to get back into it. They stayed positive and stuck together. A lot of tribute to our senior leadership that game because going down 2-0 out of the gate is not easy. It was really neat to see their resilience, especially this early in the season. It gave us a lot of confidence moving forward of the character we have on the team.”

In the second period JDHS’ Johns scored at 12:55 on assists by junior Karter Kohlhase and sophomore Ian Moller.

“Colton (Johns) had probably one of the best games of his career that day,” Adams said. “I mean that only by the score sheet. He’s an outstanding, hardworking player and it was great to see him get on the score sheet. He was on point with his shot and it was just a little too much for the Homer goal keeper to get a read on it through the traffic we had.”

Senior Fin Shibler scored at 7:20 with assists by classmate Andre Peirovi and Campbell, tying the contest at 2-2.

“Fin is a guy who works the puck down low around the net,” Adams said. “He made a couple great plays to bury that one.”

The Crimson Bears finished the scoring in the third period with Moller hitting at 12:15 on assists by sophomore Sonny Monsef and Johns; and Kohlhase finding the net at 4:05 with an assist by Meier.

“Karter (Kohlhase) had an outstanding finish at a very timely moment,” Adams said. “All around it was a great offensive effort once we settled down and dialed in. Up and down the ice our game looked really well and we had a lot of good scoring opportunities and we were able to capitalize.”

The Crimson Bears finished their road trip with a 5-4 win over the Colony Knights (DI MAC) on Saturday.

“Outside our division, Colony is a team that throughout the years we have gone back and forth with and they have an outstanding program that is very physical, fast and skilled,” Adams said. “For that game, that might have been the best high school hockey game that I have ever had the pleasure to coach in. Back and forth the whole time. Both teams were working extremely hard. In the end I think the senior leadership on our team really came through. Once again our outstanding goaltending, Caleb Friend, battling for three periods. To say we had timely goals in that game would be an understatement. Every goal was huge… it did get very physical… Even though it was back and forth we had a lot of control the whole game and we never quit. In the end it was a true team win.”

JDHS’ Kohlhase found the net unassisted at 10:13 to tie the score.

“That was a wrap-around opportunity where he went behind the net,” Adams said. “He saw an opportunity and he put it away to the far side of the post. That kind of started the process of putting their goalie on his heels and we definitely worked for every goal we got that game.”

Colony’s Gallagher scored with time elapsing for a 2-1 advantage and he would also put a goal in at 12:13 of the second period (AST - Isaac McKenzie) for a 3-1 lead.

“Those guys play on the same line together along with Fin Shibler,” Adams said. “Around the net those guys are dangerous. They know where everybody is going to be and they keep that puck moving until an opportunity opens up and it was one of those situations where Colony wasn’t able to figure out what we were doing. And those kids executed. That is what you need in this league and at this level.”

Colony regained the advantage with Gallagher’s third goal of the game, unassisted at 1:39 but Shibler answered for JDHS with 28 seconds left in the period and an assist by Bovitz.

The Crimson Bears took the lead in the third period on a goal by Peirovi at 9:09, assisted by Bovitz.

Said Adams, “The best part of it is after this series coming out with two wins and one loss against some really quality opponents, all of our kids are walking out and they know this is just the beginning and we have a lot of work to do to get better. And that’s the name of this game, get better until the end. We are hoping our work ethic is going to pull through and we will be there when the time is right and we’re going to be ready.”

“We’re excited to get those games underway because we know Kenai is a quality opponent,” Adams said. “We also know that Homer is going to want some revenge for the first one. The next ones are conference games so we know the temperatures are going to be dialed up even more. We are not taking anything for granted. We are back to work in the mornings and we are going to be prepared.” 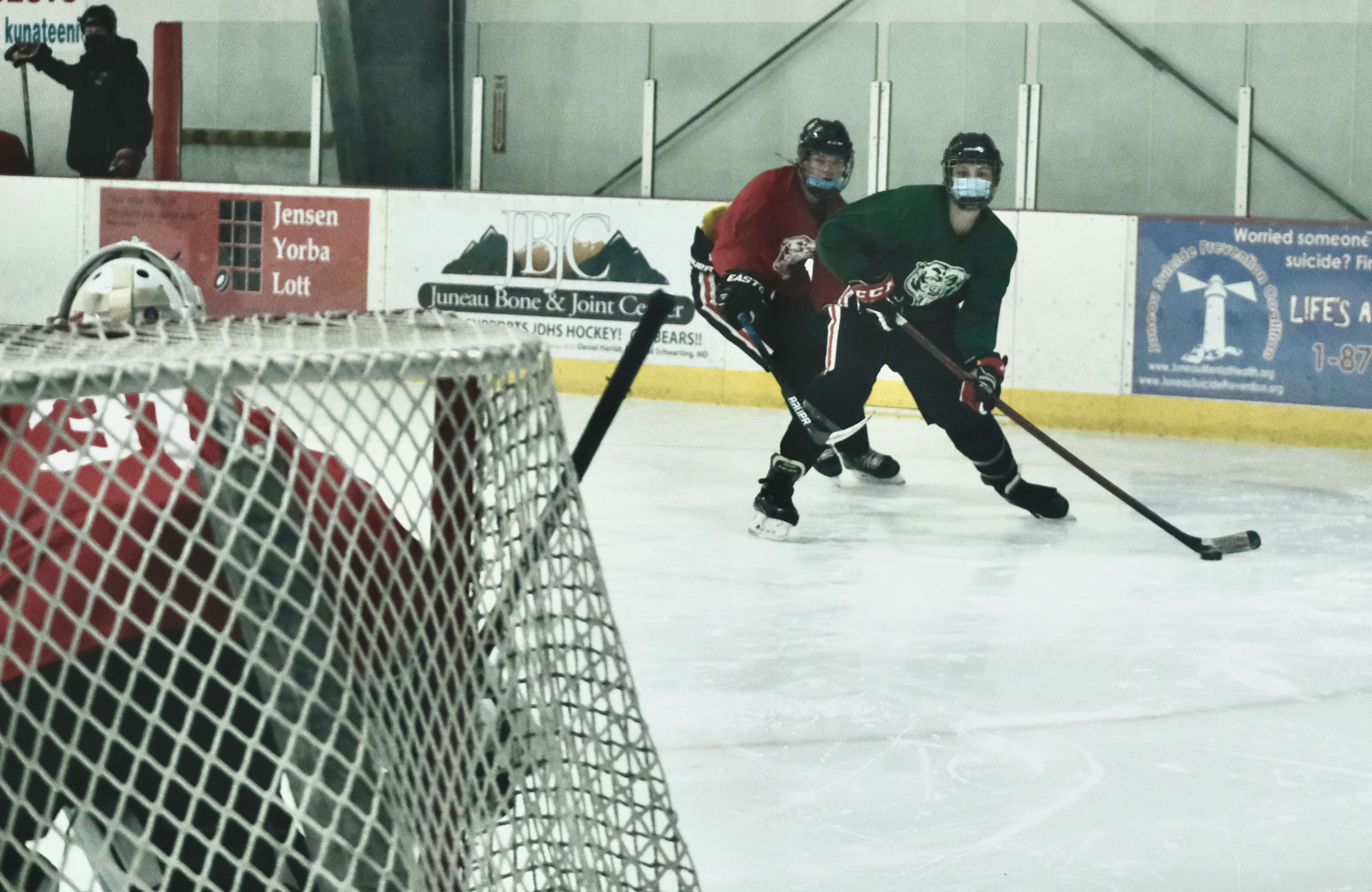 All Photos - Members of the JDHS Crimson Bears hockey team are shown in practice before their season opening road trip to Palmer. JDHS won two games and lost one on the trip.