Crimson Bears Girls Too Much for Lady Braves 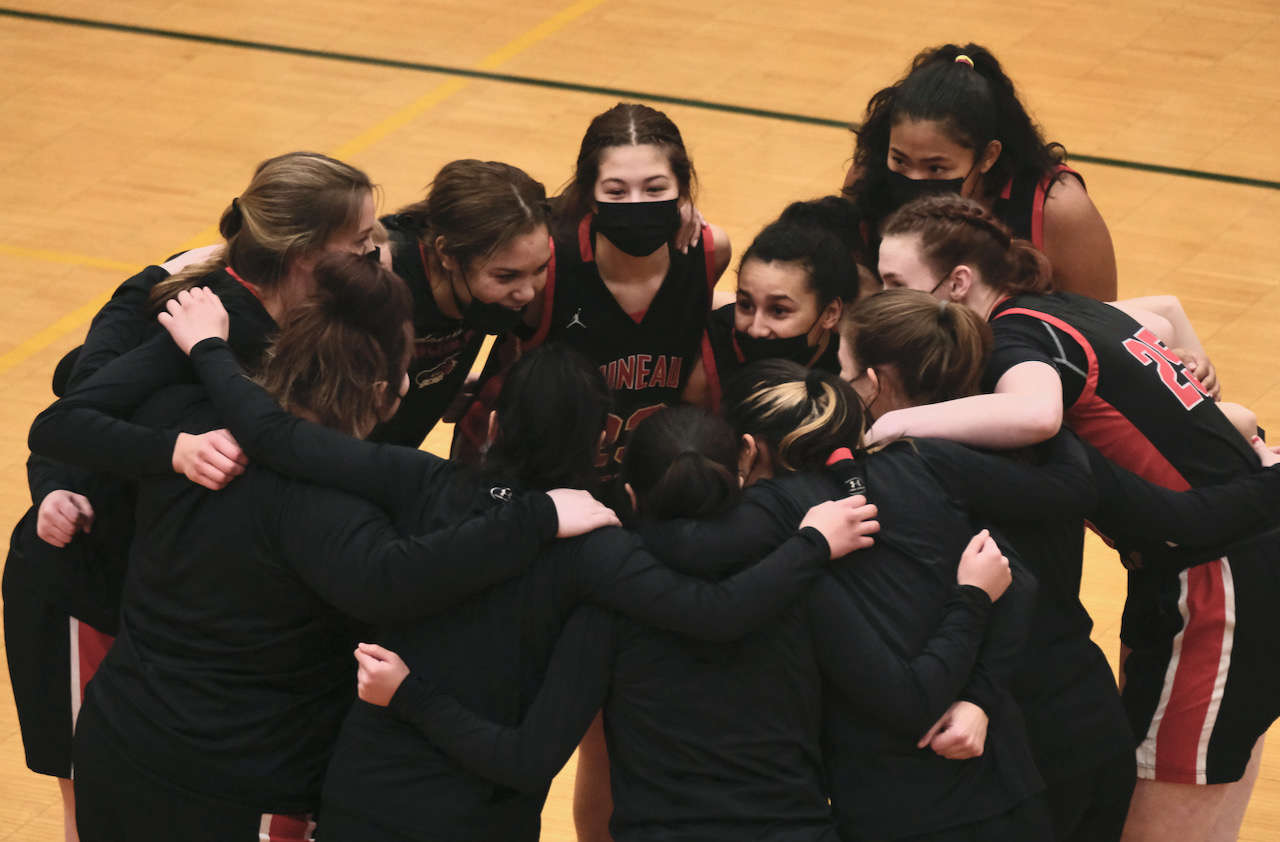 JDHS girls huddle at the Capital City Classic. The Crimson Bears defeated Mt. Edgecumbe 57-40 and 62-35 at the Lady Braves gym over the weekend. (Klas Stolpe)

Juneau, Alaska (KINY) - The Juneau-Douglas High School: Yadaa.at Kalé Crimson Bears girls were too tall, too fast and shot too well for the Mt. Edgecumbe High School Lady Braves, winning on the rock in Sitka on Friday 57-40 and Saturday 62-35.

“We were definitely quite a bit bigger,” JDHS coach Steve Potter said. “And when our full-court defense was clicking we made it pretty tough on them.”

Crimson Bears junior Ashley Laudert bolstered the inside, senior Trinity Jackson provided scoring and defensive pressure from end to end and junior Skylar Tuckwood continued to be one of the best deep-threat shooters and defensive stoppers in the league.

On Friday, Juneau-Douglas took a 19-7 lead after eight minutes of action and were up 31-14 heading into the half behind the deep-threat shooting of Jackson and Tuckwood. Jackson scored all 15 of her points in the first half.

“We were definitely a little bit streaky,” Potter said. “We gave up a few more points than I would have liked but I think that we figured out some things. It appeared towards the end that we started working as one unit much better. Our rotations were getting better. We were stopping plays that we were giving up points on earlier.”

Potter noted the increase of multiple players contributing either in the scoring or on the defensive end.

“They are on the varsity for a reason,” Potter said. “They can play. They are taking advantage of their opportunities. We don’t say ‘you don’t get to shoot’ or anything like that, so when they come in they need to be ready to play. If that means making a shot or playing defense that’s what it is.”

In other games Potter said there were stretches in both that needed improvement.

“There were stretches where we seemed disconnected,” he said. “What I did like was, particularly today (Saturday), we dug ourselves kind of a hole where, for whatever reason, we weren’t locked in to start the game and I thought that the girls did a really good job of rallying together and played much better. They did it through their talking and through being aggressive and moving with much more purpose offensively and defensively. We are getting better at that.”

On Saturday the Crimson Bears found a different Lady Braves team in the first quarter, falling behind 18-13.

Juneau-Douglas picked up their pressure in the next eight minutes and limited Mt. Edgecumbe to two free throws.

The Crimson Bears’ Tuckwood caught fire from the field and Laudert was unstoppable inside for a 31-20 halftime advantage.

Juneau-Douglas again used their defensive pressure to limit Mt. Edgecumbe to just four points in the third quarter and built a 45-24 lead with just eight minutes left to play. Seven different Crimson Bears scored in the second half.

Juneau-Douglas has an overall record of 8-2 and are 0-2 in the Southeast Conference. The Crimson Bears next host Colony High School on Thursday.

“I think Colony is going to be quite a step up competition wise,” Potter said. “We need to operate under our basic defensive principles. The last time we played Colony they beat us. That was two years ago and we were pretty good then. I think that as long as we keep our man in front of us, make sure we are paying attention to the little details like blocking out, having our rotations, just being engaged in the plan as a whole I think that we have a shot to do really well against them. But if we don’t they can make you pay. I’m pretty sure they have back some of those girls from the last time they were here. They have some size and a lot of speed, and they always have shooters.”