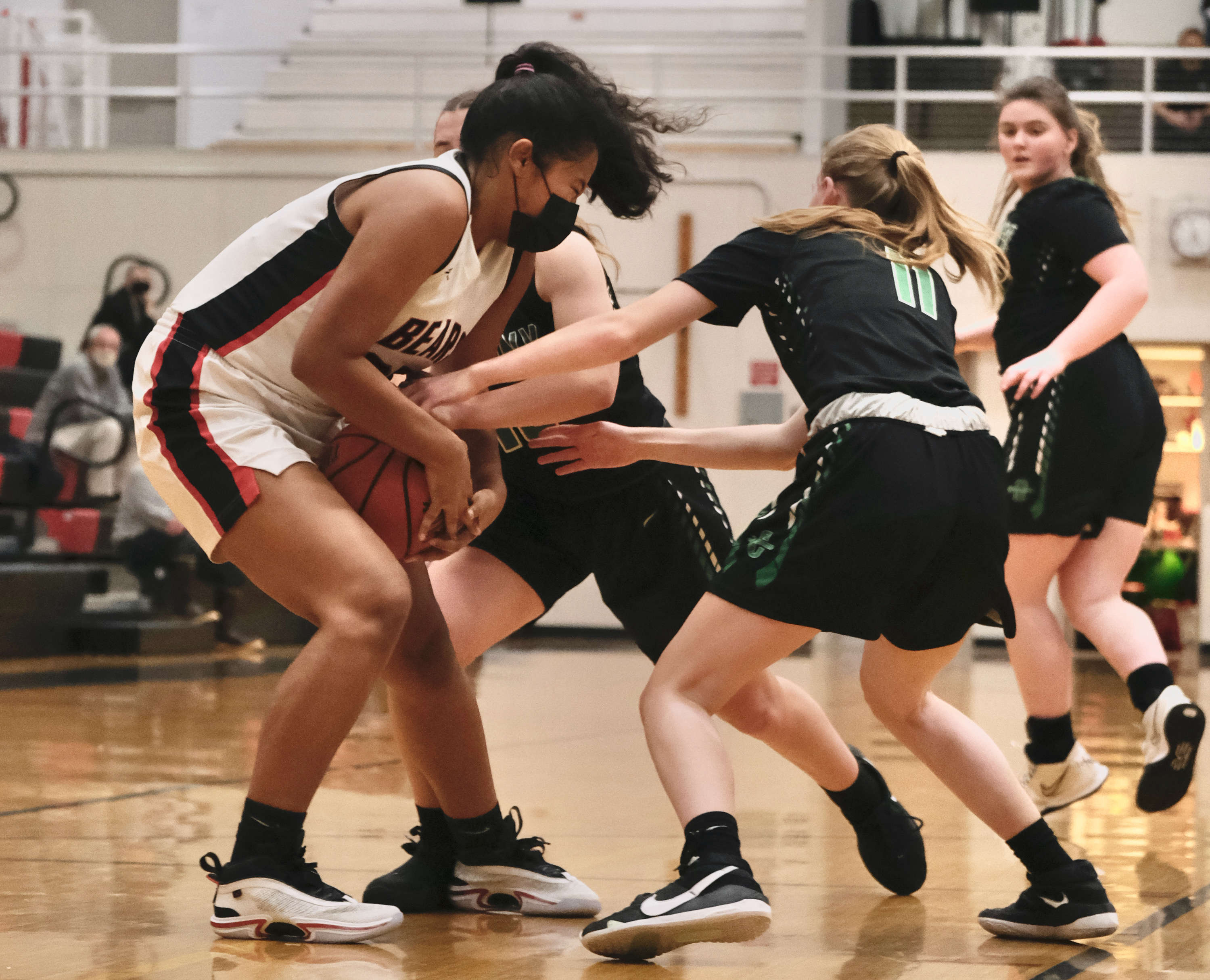 JDHS' Gabbi George-Frank battles for a loose ball against Colony last week. The Crimson Bears are playing in Fairbanks this weekend. (Klas Stolpe)

“I know she had at least three offensive rebound put-backs,” Crimson Bears coach Steve Potter said of George-Frank. “Where there was a lot of contact on the play that may or may not have been called. She was just way more aggressive. She had a couple steals at the wing where in other games she would have allowed that person to catch the ball. I thought she was very, particularly in the second half, very active and engaged.”

Also active was Jackson, who had three steals to go with her game-high point total and hit three field goals in the first quarter, one from past the arc.

Sophomore Mila Hargrave had the other shot in the first eight minutes of action that helped the Crimson Bears take a 9-8 lead.

The Juneau girls won with every facet of their game, hitting six 3-point shots in the first half, going 9-11 from the charity stripe in the second half, and controlling the boards and playing tough defense throughout.

Junior Ashley Laudert hit a jump hook next to the rim in between her teammates' deep outside shots.

“We really struggled on the offensive end in the first half,” Potter said. “Those threes kept us in it for sure. I kind of feel like we were flat to start.”

The Crimson Bears flight on Wednesday was cancelled so they arrived on Thursday travel weary.

“It was our first travel obstacle to overcome,” Potter said. “It took us a while to snap out of it. I don’t think Lathrop was as aggressive in the beginning and that definitely allowed us to hang around. They got more aggressive as the game went on.”

The Crimson Bears guards were able to be more aggressive on defense and take more chances in their press because Hargrave, Laudert, George-Frank and senior Mackenzie Nichols provided strong inside defensive play. Hargrave recorded five blocks in the game, including two in the pivotal third-quarter run, and Laudert had two steals. Each had multiple rebounds.

“It doesn’t have to be one person scoring 20 with them,” Potter said of his bigs. “They all do similar things. It makes us more difficult to guard when there are three of them, and then Mackenzie gives us a little different look as she is more of a shooter than they are but she is still 6 feet tall. Between the four of them we can keep running size at opponents.”

“I was definitely pleased with our performance from the free-throw line,” Potter said. “We appear to be making some progress there.”

Jackson led the Crimson Bears with 19 points, which included three shots past the arc and three inside the arc, and was 4-4 at the charity stripe. Tuckwood added nine points, George-Frank eight, Grube six, Hargrave four, Laudert three and Miller two.

“There wasn’t much talk in the first half,” Potter said. “But I thought that they did a better job of communicating with each other and getting people to be where they were supposed to be. I just think that when we have that talk going we are much better and we are going to need all of that, and some, tomorrow.”

The JDHS girls play Wasilla at 3 p.m. Friday and play against West Valley at 4 p.m. on Saturday.