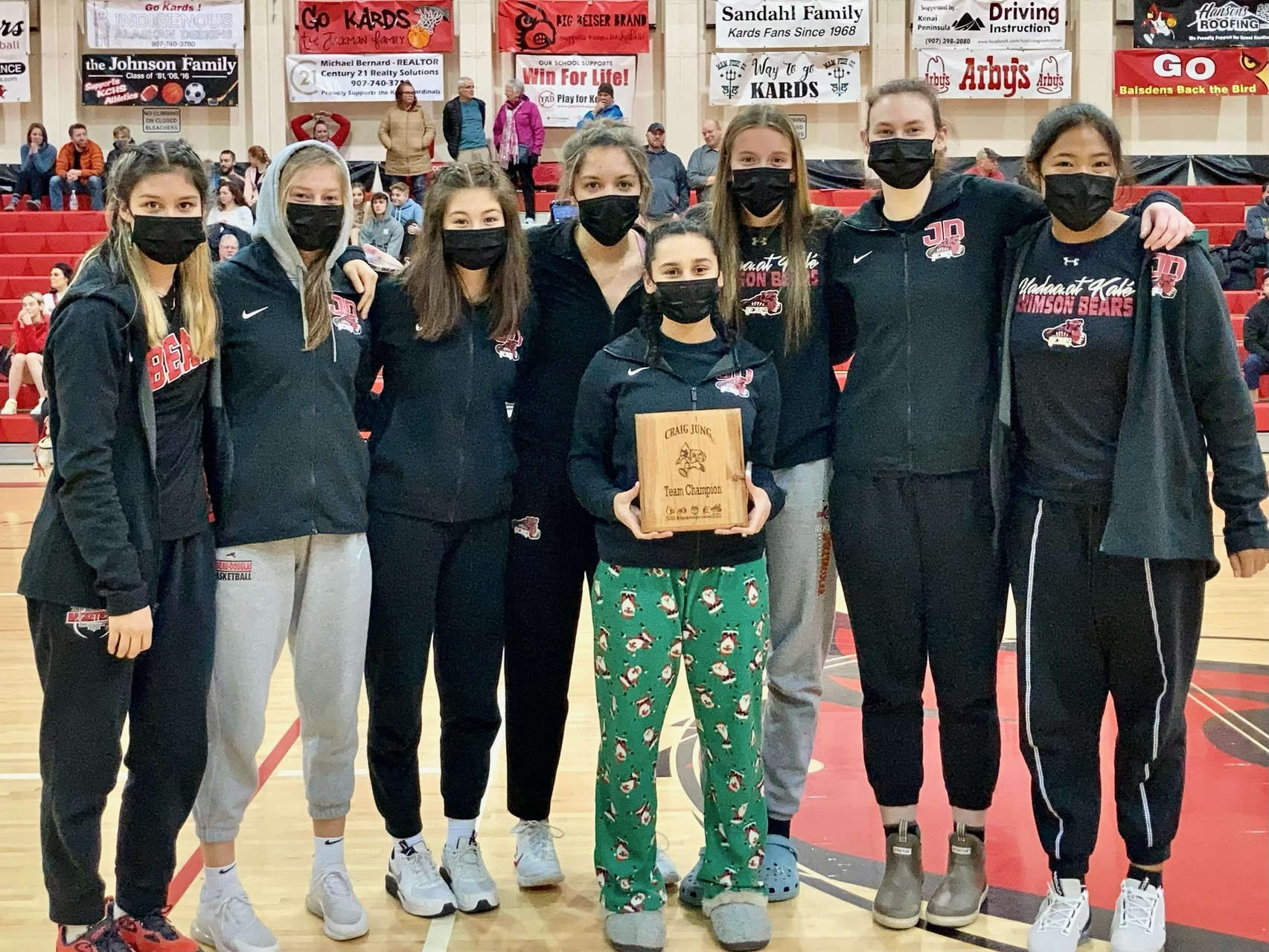 Juneau, Alaska (KINY) - After opening their season at the Kenai Invitational Tournament with a 62-17 win over the Seward Seahawks on Thursday, the Juneau-Douglas Yadaa.at Kalé girls basketball team finished a sweep with wins over the Kenai Kardinals, 48-36, on Friday and the Redington Huskies, 50-23, on Saturday.

“I think, just like last year, everything for us is going to start around our defense,” JDHS coach Steve Potter said. “We definitely go through cold spots on offense but as long as our defensive intensity stays then I think we will be in pretty good shape in most cases.”

“There was no question in my mind they were going to be all-tournament,” Potter said.

Jackson registered 12 steals in the game and the Crimson Bears turned over Kenai 30 times.

Kenai took an early 11-5 lead after one quarter but Jackson and senior Mackenzie Nichols put down three shots from beyond the arch in the second quarter to ease into a 20-20 tie at the half.

Kenai regained a one point advantage, 30-29, after three quarters.

The Crimson Bears picked up their defensive pressure in the final eight minutes and outscored the Kardinals 19-6 for the win as Jackson scored seven, Tuckwood six, senior Rebekah Grube four and junior Ashley Laudert one. JDHS hit 10 of 13 free throws in the stanza.

“Kenai gave us a good run but we were able to stick with our defense because we had to,” Potter said. “They had a skilled post player. We had to play hard through the whole game to wear them down. At the end of the game we were trending upward and they weren’t.”

Against Redington the Crimson Bears led 9-7 after the first quarter and then opened a 28-12 lead at the break behind Tuckwood’s seven points and Jackson’s four, and perfect free throw shooting from Grube and Laudert.

JDHS held Redington to just three points in the third quarter and led 38-15 heading into the final eight minutes of action.

Laudert took advantage inside for the Crimson Bears in the final stanza with six points.

“We only took eight girls up here,” Potter said. “I thought everybody had moments where they looked really good and everybody had moments where we are definitely not a finished product. We had people being aggressive and going for steals. Some of the girls that are cautious by nature being able to let themselves go a little bit and take a few chances where they didn’t want to before, I think that is going to help us down the road.”

The Crimson Bears next host the Capital City Classic, Dec. 27-30.

“We definitely didn’t execute the things on offense as well as I would have liked us to,” Potter said. “So we’re going to have to tighten that up a little bit. I think we saw what impact our defense had. There will be times when we score in bunches but I think we are still going to rely on our defense to keep us centered. If a team has good shooters, but they can’t get the shot off then it doesn’t matter, so our defense was big for us. And we definitely figured out the benefits of moving the ball and looking for teammates. That was when we had our most success on the offensive end.”