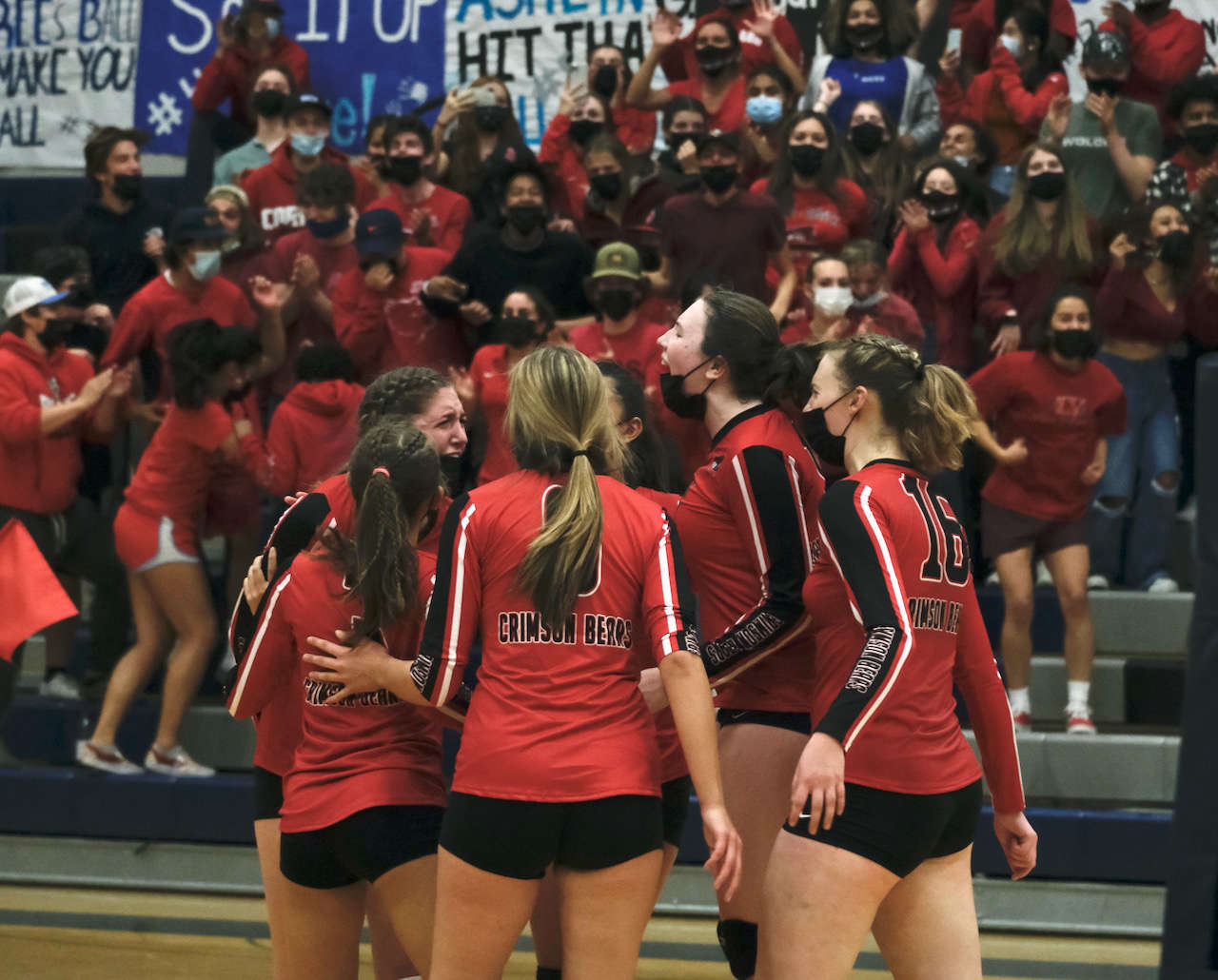 Crimson Bears volleyball players celebrate a win over Thunder Mountain earlier this season. JDHS will not play at Petersburg this weekend due to a COVID-19 spike there. TMHS hosts Ketchikan this weekend.

Juneau, Alaska (KINY) - The Juneau-Douglas Yadaa.at Kalé volleyball team is defeating conference rivals left and right and did so again over the weekend at Ketchikan with two five-set match wins, but their road plans will take a twist this weekend as Petersburg has canceled hosting their JDHS series due to a COVID-19 spike within the community and has reverted to remote schooling this week.

That said, it looks like the coronavirus pandemic is the only thing that can slow the Crimson Bears in their recent schedule as they defeated Ketchikan on the Lady Kings court 3-2 on Friday and 3-2 on Saturday.

But Friday was a match against 4A power and conference rival JDHS.

Ketchikan proved itself a worthy opponent as they jumped out to a 2-1 set lead in the best-of-five match on Friday.

The LK won set one 25-17 but the Crimson Bears tied the series with a 25-23 display of road weary, but dominating net play courtesy of  senior outside hitter Merry Newman, senior middle hitter Brooke Sandford and junior middle hitter Ashley Laudert.

The LK won set three 27-25, needing extra points on their home court despite JDHS’ Newman keeping the Crimson Bears in the thick of the action with a string of six service points. The Crimson Bears came out of hibernation to win the final two sets 25-18 and 15-10 to win the match 3-2.

Ketchikan would have to play Sitka next but they couldn’t resist poking the bear, so to speak, as Kayhi coach Kevin Johnson called the Lady Wolves “better than Juneau… they’ll three-piece Juneau…” in a media interview. (The LK went on to down the ‘better’ Sitka Lady Wolves 2-1 by scores of 23-25, 25-14 and 15-9).

JDHS fixed that component of their game to dominate their stay in Ketchikan, winning the last two sets 25-17 and 15-9.

Kayhi did beat Sitka again 25-19 and 26-24 and did give props to JDHS, saying “Hats off to Juneau… you could tell they have more experience than us…”

The Region V volleyball tournament will be in Ketchikan this year and Kayhi coach Johnson said it would not be the last time people get to see the Lady Kings play Juneau or Thunder Mountain.

“It won’t be the last time,” Johnson told local media. “I promise. We’ll be OK.”

No statistics were available from the matches at Ketchikan.

Volleyball fans in the capital city will have a chance to see the Ketchikan Lady Kings in action this week as they play at Thunder Mountain on Friday at 6 p.m. and Saturday morning at 9:30 a.m.