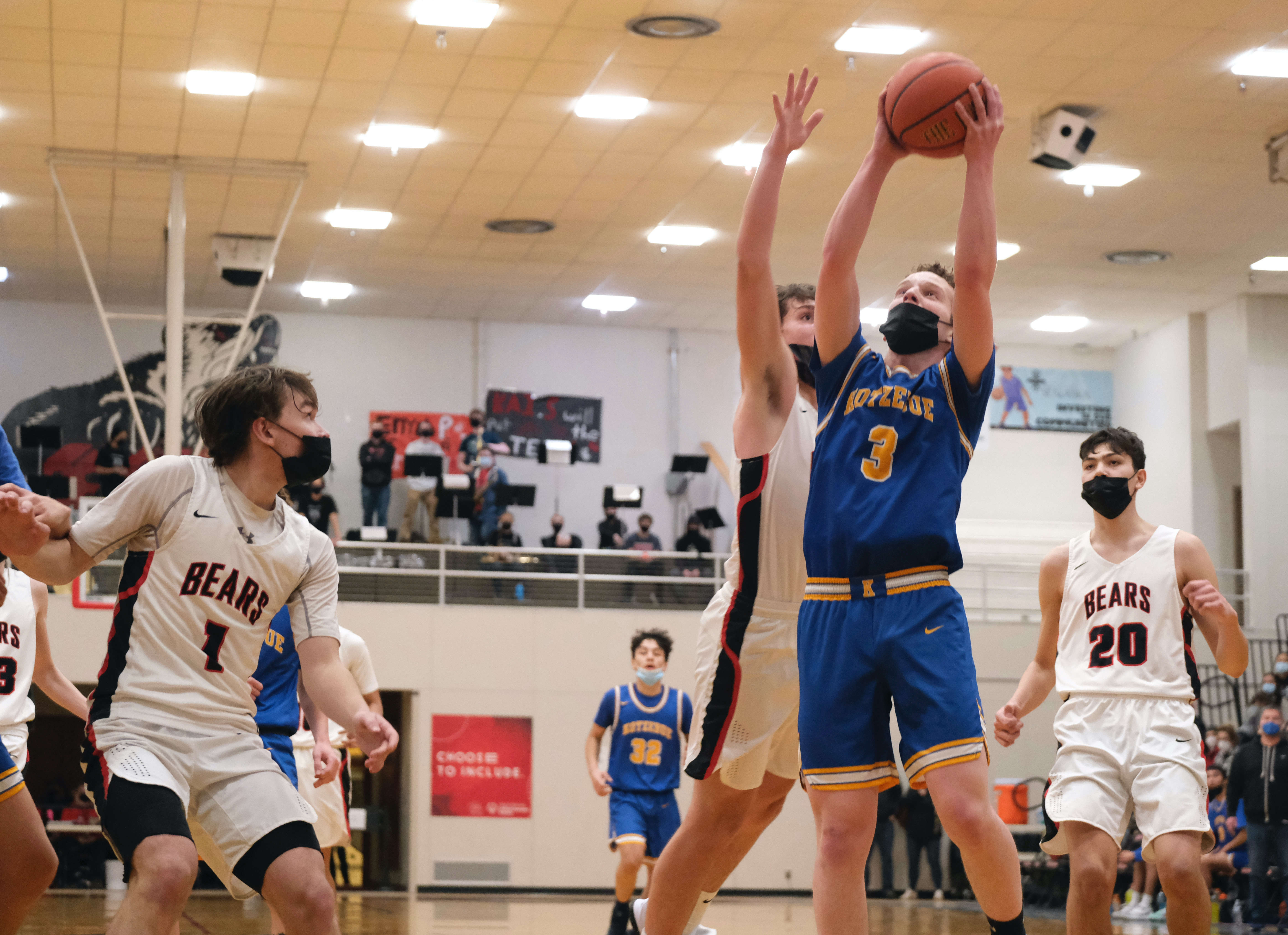 JDHS' Kai Hargrave defends a Kotzebue player during the Capital City Classic in December as Porter Nelson (1) and Orion Dybdahl (20) move in. The Crimson Bears are playing in Fairbanks this weekend. (Klas Stolpe)

Juneau, Alaska (KINY) - The Juneau-Douglas High School: Yadaa.at Kalé boys basketball team couldn’t chase down the Lathrop Malemutes in their opening game of the Denali State Bank Ice Jam tournament at West Valley High School, falling 55-48, despite putting together one of their best games to date.

“We made a Herculean effort to try and get back into that one,” Juneau-Douglas coach Robert Casperson said. “And just came up short. That was a game where we got beat, more so than we lost. Same result but there is a difference. The guys battled, they fought back, they finally made some shots and gave us a chance.”

The Crimson Bears put themselves in an early deficit with just nine points in the first quarter, coming off a deep shot by senior Porter Nelson and three closer shots by senior Tias Carney, junior Joseph Aline and sophomore Alwen Carrillo. But the JDHS defense held Lathrop’s athletic and rangy group to just 12 points.

“I think we played hard,” Casperson said. “I’m really pleased with the effort. We’re doing a lot of the things we talk about. We’re building and really, truthfully, the last piece of that puzzle is finishing plays at the rim and hitting buckets that we are getting.”

JDHS started to be more aggressive in the second quarter and reached the free-throw line nine times, converting five, and Aline put in two shots off hard work inside.

Lathrop hit three shots past the arc in the second quarter, including two by 6-foot-3 guard Atticus Foley, one of which came at the halftime buzzer for a 31-20 Malemutes lead.

JDHS held Lathrop to eight third quarter points, but the Crimson Bears scored that amount themselves and trailed 39-28 starting the final eight minutes of play.

Both teams lit up the scoring in the fourth quarter with JDHS scoring 20 points as junior Kai Hargrave hit two shots past the arc and another closer in, and Nelson collected one from past the arc and Carrillo two inside the arc. Lathrop tallied 16 points in the final stanza, nine form junior Peyton George.

Crimson Bears senior Alyx Bohulano followed a shot to score with 20 seconds remaining in the game and cut the Malemutes lead to five points, 53-48, but Lathrop’s George hit two free throws to put a three-possession game on the court for JDHS.

“I am pleased all around,” Casperson said. “Like I said, we got beat. Lathrop had to beat us this time. If we play with this kind of effort and intensity and trust then I think the execution offensively, and those pieces, will start to fall into place and we’ll do better. We’ll score more.”

“Porter (Nelson) was given the player of the game award,” Casperson noted. “Along with him I thought Kai (Hargrave) played his best game in a long time. He was a lot more active in a very physical game, especially with the bigs inside there was a lot of bumping and banging and playing. I thought Alwen Carrillo played more up to his capabilities tonight, distributing the ball, attacking the rim and just kind of causing problems for the opponent and that’s what we have been missing from him the last few games. That is nice to see him sharing that talent again with his teammates.”