College Coach Says Miller is Best He has Coached 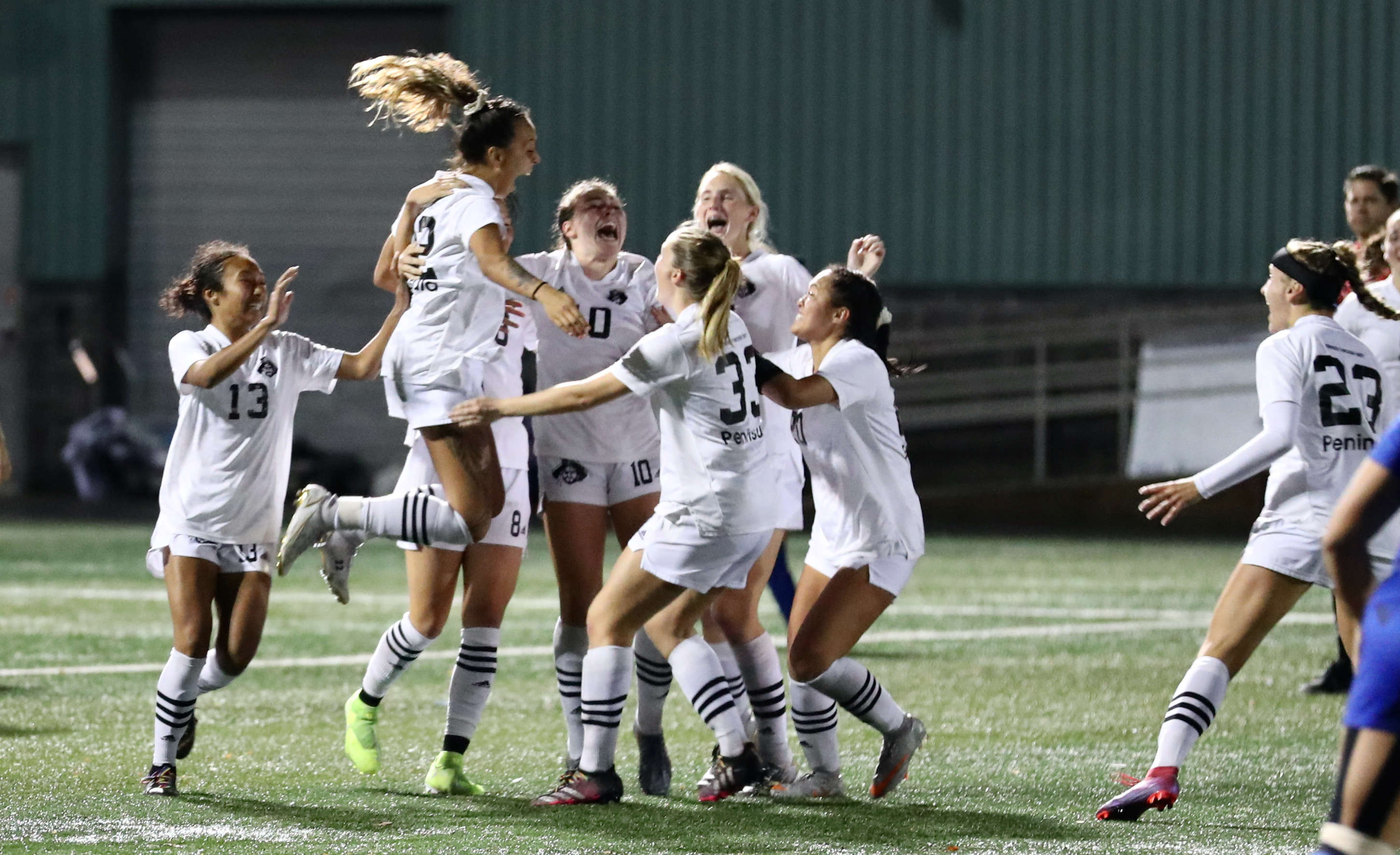 Malia Miller (13) celebrates a goal with her Peninsula College teammates during the NWAC Championship. (courtesy photo)

“First and foremost she is a transcendent player,” Anderson said. “There’s very little she can’t do on the field. She’s fast, she’s quick, she’s strong. She’s a good dribbler, she’s an excellent passer. She works super hard. She’s just a really brilliant player which I’m sure everybody in Alaska who follows high school soccer already knows… Her ability to just shift… it looks like she is going to go by a player on the right side and suddenly she goes by them on the left.. she is one of the most mobile and laterally shifty players, maybe, that I have ever coached. She makes defenders look so silly. But on top of that she’s a really, really kind teammate.”

Anderson said the team has a first year player from Japan that speaks little, if any, English. Miller speaks no Japanese.

“Malia just brought her under her wing,” Anderson said. “Translated for her in some way. Malia was her guide through the beginning of the season until she got better at English. Malia’s teammates love her, she has been absolutely awesome for us.”

Miller said the win felt amazing, “That is what we were looking for the whole year. It is why I came here because I knew everybody was just crazy talented. I knew we were going to have a good shot at it but of course you have to put the work in. You have to get it done and we did. It just felt like a dream come true. Everything that I wanted to happen, happened. There are not any other feelings that are quite as good as that one.”

Miller, a sophomore, and that freshman Japanese teammate Chiaki Takase each had six shots in the game. Miller put a team high four shots on goal and assisted in the game winner. Peninsula outshot Clark 23-10, including a 14-4 advantage in shots on goal, as they won their fifth title in the past 10 years, nine of which saw the team in the finals.

Miller also had the assist on the match winning semifinal goal in the Pirates 2-1 win over Columbia Basin.

“I had a great conversation with Malia in the summer,” he said. “I was concerned about that. I knew she was good. I was concerned about the cohesion piece of it. I told her ‘listen, it is not going to be the Malia Miller show, it’s not going to be all about you.’ It probably has been a lot like that growing up with all the attention she got. She was so cool about it. She said ‘I don’t want it to be about me, I want it to be about the team, that is the right thing.’ When she gave me that answer I just thought this kid has a really good head on her shoulders and she is going to be a great fit.”

Anderson said it was seamless because of how humble Miller is.

“To have the accolades that she has, probably all the way growing up, yet to be so grounded and humble and really defers to her teammates,” he said.

Throughout her career, and at Bellevue, Miller played right in the middle as an attacking mid or forward. At Peninsula she has been used typically on the left or right wing. Miller said that transition was difficult.

“I’m not going to lie, that was pretty tough,” she said. “It did hurt me a little bit. I have never played out there. I do think I am decent enough to where if I have to step up somewhere and play a different position, as long as it is not center back maybe, I can do it. I think that it was a good experience for me to get to play in that new position because at the next level who knows, I may not play in the middle. It is just good to have an open mind set of where I might be playing.”

Anderson said Peninsula was so talented that Miller first played off the bench.

“She could have been a starter but there was no sense replacing the starter in that position who had been here for three years,” he said. “Malia played the same number of minutes as those players. The ability of the players to put their attention to one common goal and not get wrapped up in the individual ego, that to me is the real special piece.”

Among Miller’s accolades at JDHS are four time all state tournament selection, two Division II state titles, and a DI third and fourth place finish, Crimson Bears records of 105 career goals, 240 career points (105 goals, 30 assists), 43 season goals (also scored 29 one season), and 102 points in a season (43 goals, 16 assists) and the all-time state goal scorer in Alaska. She is also second in JDHS career assists with 30 (Taylor Bentley 41) and individual season assists with 16 (Bentley 17). She was selected the Gatorade Alaska Girls Soccer Player of the Year as a senior. Miller said those accomplishments fueled her more.

“To still try and be at the top,” she said. “Try and play my best. That was something I definitely tried to live up to. I never want the standard to drop for myself.”

At Bellevue, Miller scored 17 points in 17 games to earn All-NWAC honors and finished with four goals and nine assists as she adjusted to college life that included six a.m. weight training, then class, then homework practice later in the day and more homework.

“As time goes on and you get used to the schedule it gets easier,” she said. “The biggest thing was the change of pace. Having a group of people, not always, but if you are lucky like we did this season at Peninsula, having a group of people that all have the same mind set. I would say the competitiveness is a lot higher in some ways.”

Last year COVID limited league play to friendlies and did not count as a year of eligibility. Miller tore her lateral meniscus just three games into her Bellevue season. She would transfer that summer to Peninsula. Miller was unable to train but was able to work back into shape.

“My rehab wasn’t too bad,” Miller said. “I just had to take a month off. I didn’t have to do any physical therapy, I just had to rest it.”

Peninsula coach Anderson said that COVID refocused the team on what they love about soccer.

“It isn’t about beating somebody else,” he said. “It isn’t about winning a game or getting patted on back. It is really about being with your team and building and growing. It was weird. We trained all through the winter, some cold, cold days, pretty miserable sometimes… it was nice to sort of bring the girls back away from competition but more focus on their love of the game. We developed some really strong bonds. That weird COVID season turned out to be a blessing in disguise.”

Miller said she transferred because “The coach had a different vision for the team and didn’t have the same mindset I wanted and Peninsula did. I decided that I wanted to come work hard for this program and give it everything I had. I thought it would be more beneficial to me and I felt I could help other people too and build better relations.”

Miller knew Peninsula would be good as they had beaten Bellevue 4-0 in the 2019 conference tournament. She said,  “I was just hoping that I could bring some more of that championship spirit to the team because I felt like I was on the same page as far as everyone else. Just wanting to get better and get a ring for this last year that we had. We have a lot of super sophomores on this team. I think it just meant a lot to all of this to win this last year. I am still learning every day. I think coming here I learned a lot more just being around so many good players every day whether it is training, or games or just watching film sessions. Everybody has great knowledge of the game and it is just cool that I get to share it with so many other people.”

Anderson said it was a treat when he opened his email inbox and saw a message from Malia Miller on there.

“I thought ‘oh my gosh, I hope this is what I think it it,’ because sometimes we get recruited by the player too, which is awesome,” he said.

Miller totaled 12 points this season in 16 games for Peninsula, scoring four goals and getting four assists and being noted by Anderson as one of their prime pieces.

“I think she may have deserved the Player of the Game in the final,” Anderson said. “You could make a case that she was the MVP of the final four. She got the assist on the game winning goal and she was brilliant in the final. She played probably 75 minutes in the final. But really I just really admire her humility. It is not about her… you look at all her high school accolades and you would think it would go to her head, gosh it would go to mine… and she is just very, very deferential when you praise her. She just wants to get out and play. She’s funny. She’s kind. Those are the things I’ll remember about her. Along those same lines I think her best quality is her passing ability. She has all these goals, and that’s what she is known for, but I think she is a better set up player than she is a goal scorer. She probably passes more than she should some times.”

Miller’s former high school coach Matt Dusenberry was on hand to watch the final and she said that was fun.

“I love having my high school coach there,” Miller said. “He was there for the quarter final too when the Peninsula team beat me 4-0. He came and he drove all the way out to Peninsula to watch that game as well. He’s always there to support me after my games. Still analyzing, still coaching, that is what he does best. It is really fortunate to have him there even a few years after I’ve graduated.”

Coach Anderson and Dusenberry have formed a friendship over the years.

“Particularily working with Malia,” Anderson said. “And he has a player he wants me to keep a close eye on.”

Miller’s community college eligibility is done and she will hope to play at a four-year college next season.

“I am not sure where yet,” she said. “Hopefully somewhere warmer than Washington. No preference for schools. Maybe somewhere down south or on the west coast, somewhere warm.”

Miller was asked what advice she would give to young players in Juneau.

“Just don’t stop,” she said. “You might think that you are maybe at your best, or the best, but there is always room to improve and there is always new goals to chase and don’t ever be satisfied with what you do.”

“I just got through emailing a top division school about her,” he said. “She is so talented and such a good teammate that lots and lots of schools are going to be interested in her.”

Anderson reflected on another memory of Miller.

“For me, really, it was just to see her get happy,” he said. “Because when she came in she wasn’t particularly happy. She transferred because she wasn’t happy. It was just fun to see, she has a really charming smile, and it was fun to start to see that more and more. And to just see her light up.”

Above - The Peninsula College women's soccer team pose for a title photo.