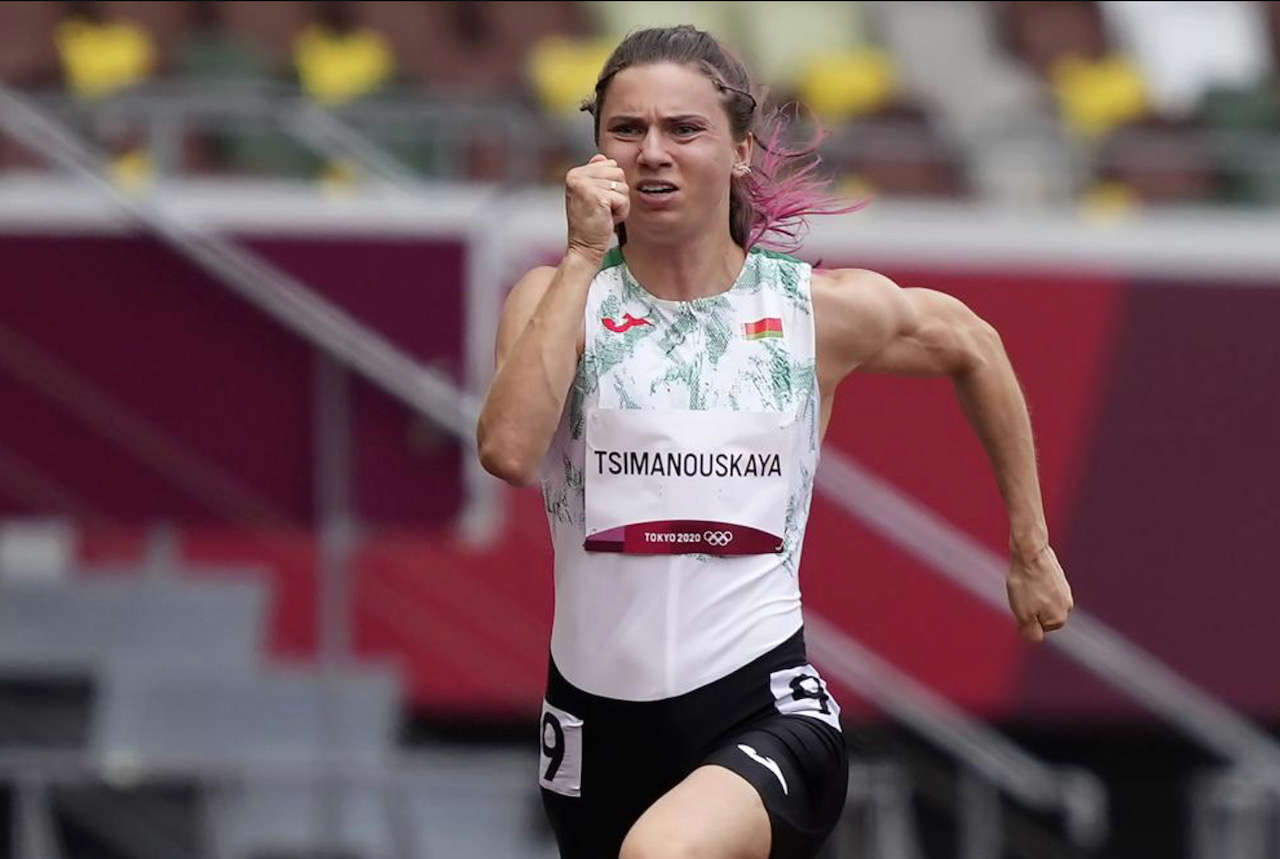 Krystsina Tsimanouskaya, of Belarus, runs in the women's 100-meters at the 2020 Summer Olympics, in Japan, Friday, July 30, (AP Photo/Martin Meissner)

MOSCOW (AP) — A Belarusian Olympic sprinter who had a public feud with officials from her team at the Tokyo Games said Tuesday that they “made it clear” she would face punishment if she returned home to an autocratic government that has relentlessly stifled any criticism.

Waiting to leave Japan to seek refuge in Europe, Krystsina Tsimanouskaya said she hopes she can continue her career, but for now her safety is the priority. After she criticized the management of her team on social media, she accused officials of hosting her to the airport and trying to put her on a plane back to Belarus.

In the dramatic standoff, several countries offered help, and Poland granted her a humanitarian visa Monday. She plans to fly to Warsaw later in the week.

Team officials “made it clear that, upon return home, I would definitely face some form of punishment,” the 24-year-old sprinter told The Associated Press in a videocall interview from Tokyo. “There were also thinly disguised hints that more would await me.”

She added that she believed she would be kicked off the national team. She hopes to be able to continue running once she has reached safety.

“I would very much like to continue my sporting career because I’m just 24, and I had plans for two more Olympics at least,” she said. But “for now, the only thing that concerns me is my safety.”

Asked what made her fear she would be in danger at home, Tsimanouskaya said that “the key phrase was that ‘we didn’t make the decision for you to go home, it was decided by other people, and we were merely ordered to make it happen.’”

Reached by phone Tuesday, Dzmitry Dauhalionak, the head of Belarus’ delegation at the Games, declined to comment, saying that he has “no words.”

In the interview, Tsimanouskaya also expressed worry for her parents, who remain in Belarus. Her husband, Arseni Zdanevich, told the AP that he decided to leave the country when Tsimanouskaya told him she wasn’t coming back.

“It was all very sudden. I only had an hour to collect my things,” Zdanevich said from Ukraine, where he said he feels safe even though police are investigating whether a Belarus activist's death there was murder. He hopes to join his wife in Poland, which is home to a significant Belarusian community.

The couple’s fears reflect the lengths the Belarus’ authoritarian government has at times gone to in its crackdown on dissent, including recently diverting a plane to the capital of Minsk and arresting a journalist aboard. President Alexander Lukashenko maintained that a bomb threat against the flight forced it to change course, but European officials denounced the move as an act of air piracy.

Lukashenko appears to have a particular interest in his country’s Olympic team: He and his son, Viktor, have led the Belarus National Olympic Committee for more than 25 years. Both were banned from the Tokyo Games by the IOC, which investigated complaints from athletes that they faced intimidation during the crackdown on anti-government protests over the last year.

The current standoff began after Tsimanouskaya’s criticism of how officials were managing her team set off a massive backlash in state-run media back home, where the government has cracked down on dissent since a presidential election a year ago triggered a wave of unprecedented mass protests.

The runner said on Instagram that she was put in the 4x400 relay even though she has never raced in the event. She was then barred from competing in the 200 meters.

Tsimanouskaya waged — and lost — a legal fight to run in that event. The Court of Arbitration for Sport said in a statement that it denied Tsimanouskaya’s request for an interim ruling that would have allowed her to run at the Olympic Stadium on Monday. The heats were held in the morning and the semifinals were in the evening.

On Tuesday, Tsimanouskaya called on international sports authorities “to investigate the situation, who gave the order, who actually took the decision that I can’t compete any more.” She suggested possible “sanctions against the head coach who approached me and who deprived me of the right to compete in the Olympic Games.”

At the same time, she said that “the athletes aren’t guilty of anything, and they should keep competing.”

Athletes seeking asylum at global sporting events is nothing new — such requests were especially frequent during the Cold War but they have also happened occasionally in the decades since.

But Tsimanouskaya’s circumstances appear to differ from the typical situation, though some, including her head coach, have suggested she was planning something all along. Tsimanouskaya dismissed that, saying she only spoke out when she learned she would be participating in an event she had never competed in.

“Everything that is happening now absolutely wasn’t in my plans,” Tsimanouskaya said.

European leaders have condemned her treatment. German Foreign Minister Heiko Maas told the daily Rheinische Post that “the rulers in Minsk have shown with their attempted kidnapping of Krystsina Tsimanouskaya that they scorn their own athletes and with this also the Olympic principles.”

Maas called Lukashenko’s regime “politically and morally bankrupt,” adding that the overwhelming support for the sprinter showed that “the spirit of friendship and respect is alive. Sportsmanship and solidarity are stronger than the violence which Mr. Lukashenko uses to cling to power.”

Still, the athlete declined to link her problems to the larger struggle in Belarus.

“I don’t want to get involved in politics,” she said. “For me, my career is important, only sports is important, and I’m only thinking about my future, about how I can continue my career.” 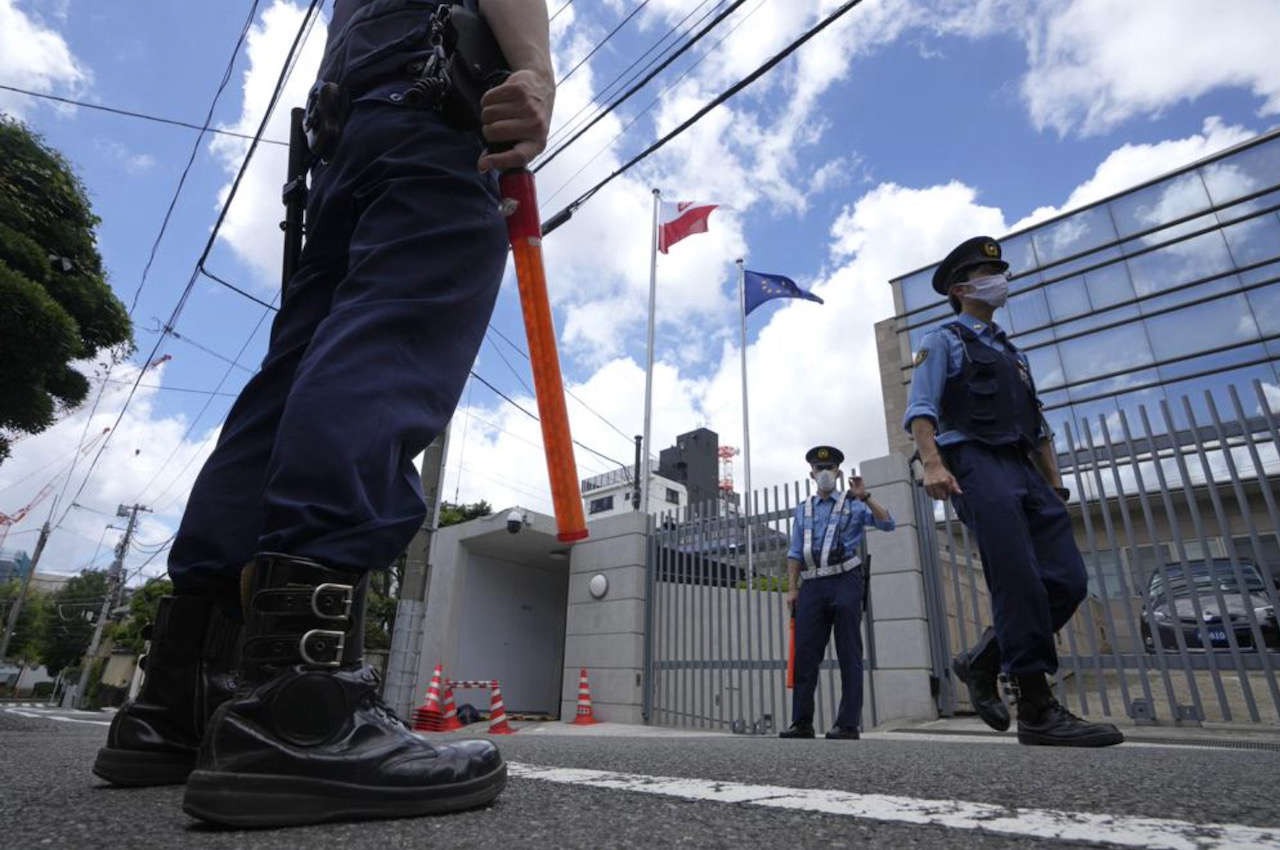 Above - Police officers guard outside the Poland Embassy on Tuesday, Aug. 3, 2021, in Tokyo, Japan. Poland granted a visa Monday to a Belarusian Olympic sprinter Krystsina Tsimanouskaya who said she feared for her safety and that her team's officials tried to force her to fly home, where the autocratic government was accused of diverting a flight to arrest a dissident journalist. (AP Photo/Shuji Kajiyama)