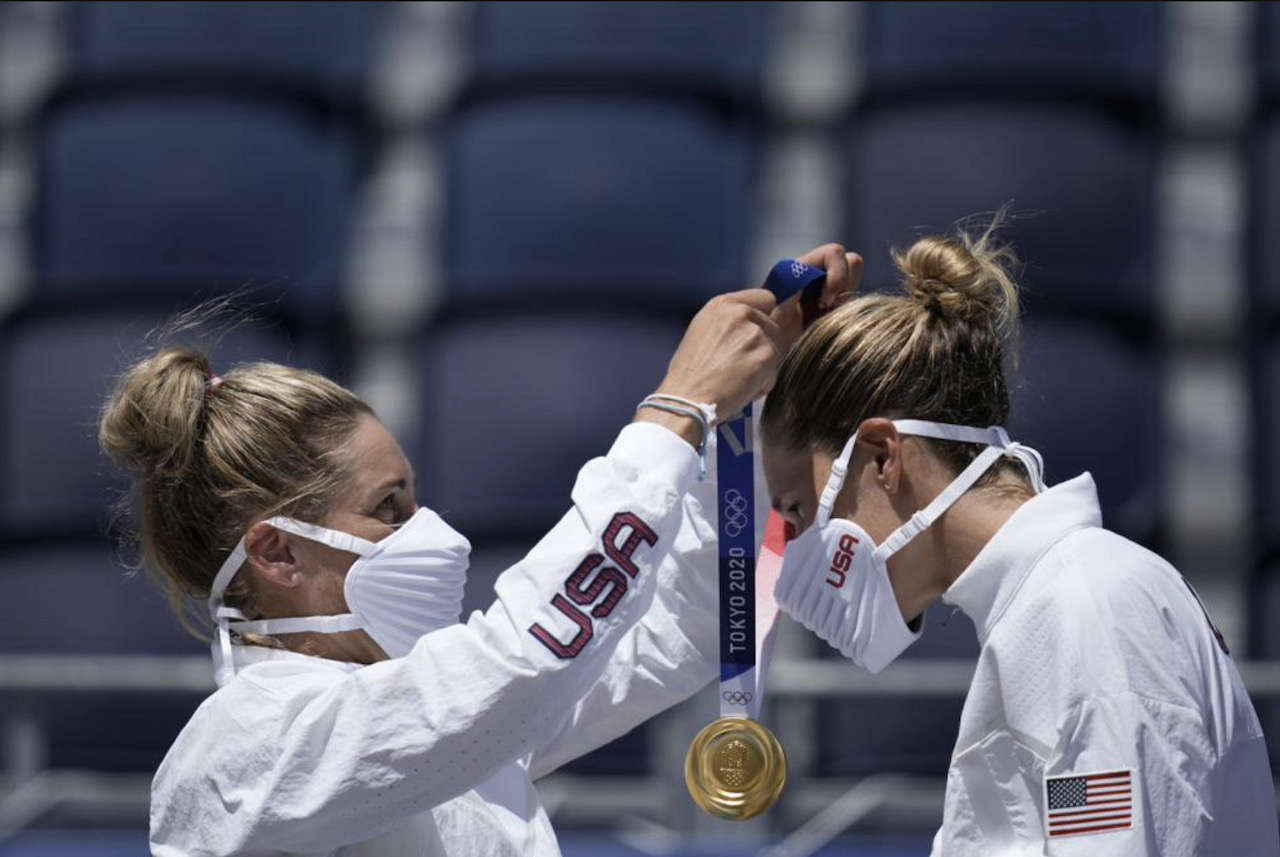 April Ross, left, of the United States, places the gold medal around the neck of teammate Alix Klineman, after winning a women's beach volleyball Gold Medal match against Australia.

TOKYO (AP) — April Ross won the Olympic gold medal that completes her set, and when she stood on the top step of the podium at the Shiokaze Park beach volleyball venue on Friday she had with her the perfect person to hang it around her neck: teammate Alix Klineman.

“I know that was a product of COVID, but it actually feels really special when you’re up there,” said Ross, who received her third Olympic medal from her third Olympic partner after a masked IOC official presented it on a tray because of pandemic protocols.

“I was like, ‘We get to award the medals to each other,’” said Ross, who won silver in London and bronze in Rio de Janeiro. “In my head, I was thinking, ‘Thank you, Alix.’”

In the bronze medal match earlier Friday, Joana Heidrich and Anouk Verge-Depre of Switzerland cruised to a straight-set victory over Latvia.

Klineman, a first-time Olympian, never let her new prize out of her grasp while talking to reporters. She said she had watched individual sports, where winners put their medals around their own necks, and was excited when she realized she could do that for Ross after working four years together to get to the Olympics, and then win it all.

“I feel like we’ve both just tried to support each other and give this partnership as much as we have,” she said. “And so it was a really special moment.”

Artacho del Solar said the four-year qualification process that stretched into five because of the pandemic was a struggle.

“Nothing was easy. These weren’t handed to us,” she said.

In this case, literally so.

“I think it’s one of my favorite moments, for sure,” she said. “It’s special to hand this medal to T, with what it meant to us, and have that little cute moment. It’s actually a very nice touch, despite the reason why we’re doing it.”

The silver for Australia was its first beach volleyball medal since Natalie Cook and Kerri Pottharst took gold on Bondi Beach in 2000. But they were never really close against the Americans, who tied for the top spot in the Olympic qualification points race and lost only one set in seven matches in Tokyo.

Klineman and Ross needed 20 minutes to claim the first set. They fell behind 2-0 in the second before scoring 10 straight points to pull away.

That silenced the chants of “Aussie! Aussie! Aussie! Oi! Oi! Oi!” from the Australians in their bright yellow shirts and brought out the cheers of “U-S-A!” from those in the red, white and blue. It was the biggest crowd yet at Shiokaze Park — about 60 people in the temporary stadium that seats 9,600.

With so few fans in attendance, Ross said, the cheering felt “more personal”; after a match earlier in the week, Canadian player Melissa Humana-Paredes took time to thank their supporters — listing each one by name.

“We’re just really grateful that the Olympics happened,” Ross said. “We were definitely embracing whatever atmosphere was there. It meant a lot to me to hear our delegation start chanting ‘U-S-A!’ against the Aussie cheer. It felt more personal, but we still felt the gravity of the match and how big it was.”

Australia survived three championship points before Artacho del Solar served into the net to seal the U.S. victory. After a long hug, Klineman went to the bench to douse herself in water, then the pair went over to the stands and posed with an American flag.

“I still can’t fathom that it worked out the way it did,” said Ross, who played with Jen Kessy in 2012 and Kerri Walsh Jennings in 2016. “It’s kind of a fairy tale story, going out there to try and get my gold medal. And the fact that it actually happened feels really special and surreal.”

The Swiss cruised to a 21-19, 21-15 victory over Tina Graudina and Anastasija Kravcenoka of Latvia in the third-place match.

Graudina was the first person to make the Olympics after coming up through an NCAA beach volleyball program that started in 2012. She played at Southern California, where she was the 2019 national player of the year and led the Trojans to the 2021 national championship. 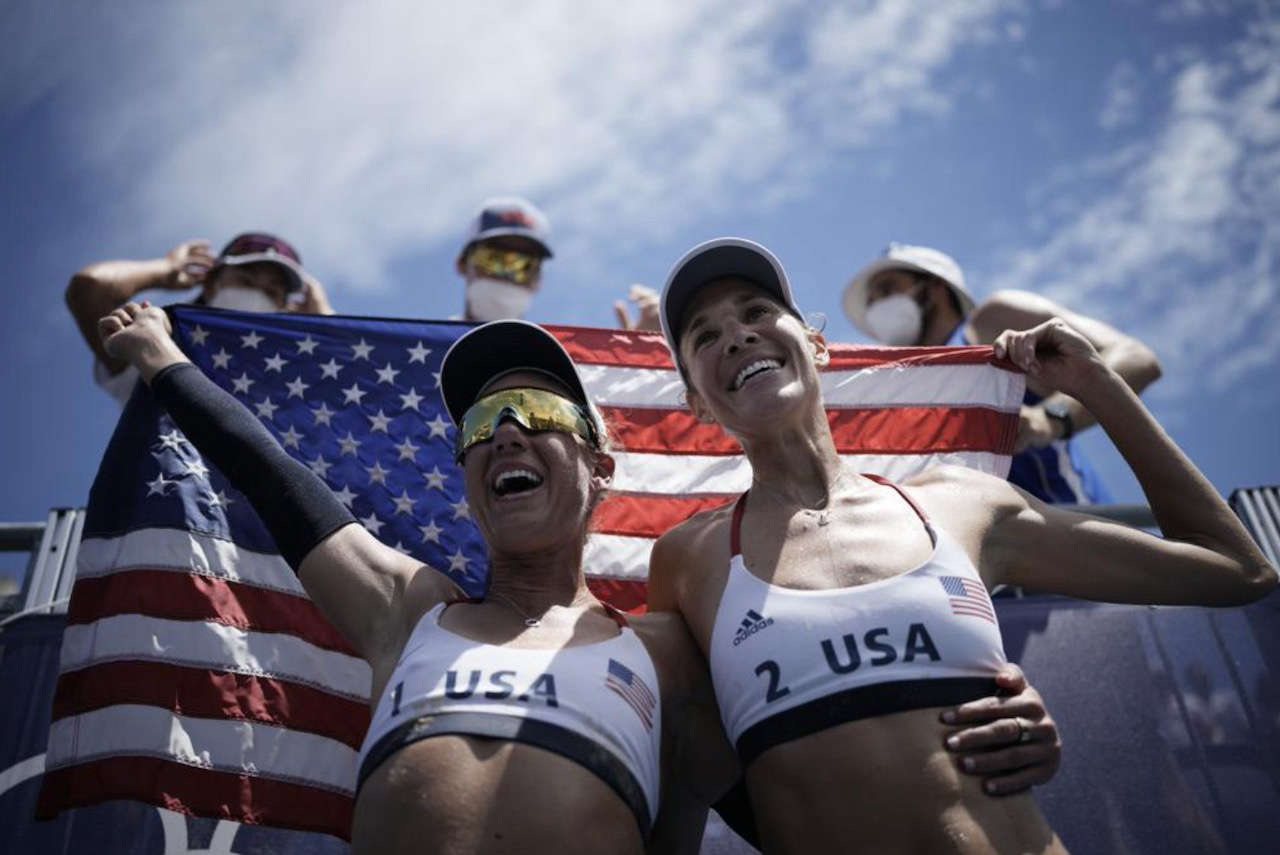