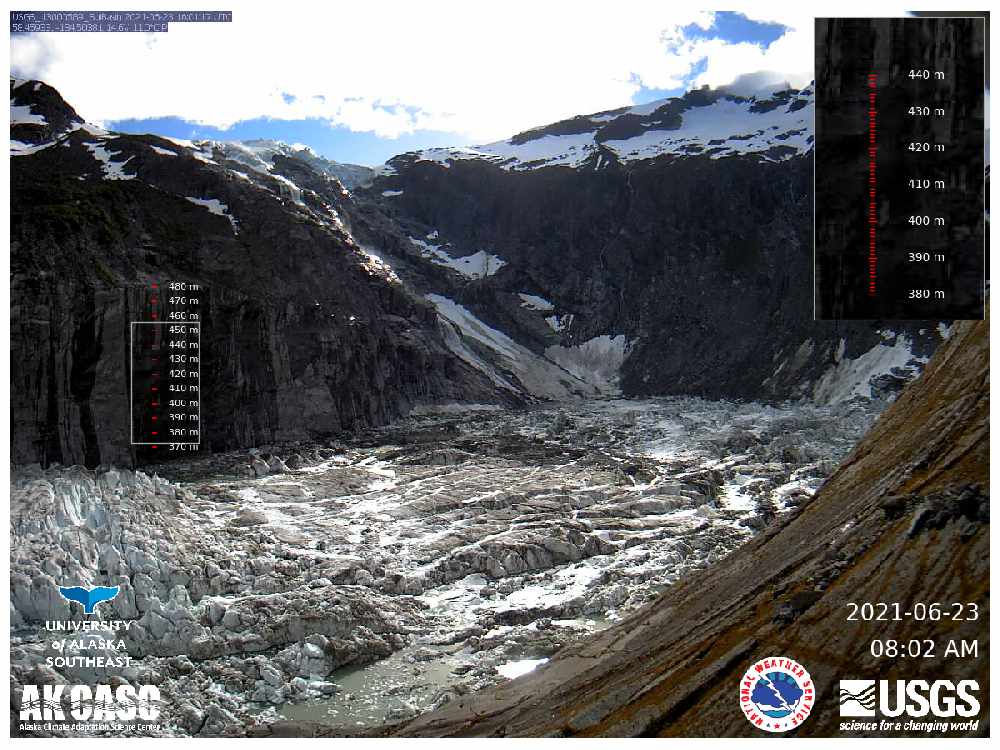 Photo from camera that is placed at the basin entrance and faces northeast into the basin on June 23rd. (Photo Credit: NWS Juneau)

Juneau, Alaska (KINY) - The National Weather Service in Juneau has been monitoring Suicide Basin recently and has seen changes in the water level.

Nicole Ferrin, Meteorologist at the Weather Service, was asked what they have been watching for, "We've got a webcam set up there and we use that to tell if the water levels look like they're rising or falling, and over the last couple days with each new webcam image we've seen a slow, decrease in the water level, indicating that the water is draining into the Mendenhall basin."

While most releases happen later in the summer, the Weather Service says they can happen as early as the end of May. Ferrin was asked late June is still considered early, she said that late June is alittle early. "Usually the basin takes some time to get the snowmelt going with such a cold and rainy spring that we've had the snowmelt hasn't really got into that basin yet, so it's not as full as it normally would be when it drains," she said.

The Weather Service said river flooding is not expected currently, but Ferrin was asked if there might be any activity that could change the status, she said that they have seen the trace on the Mendenhall lake level, and it rose, but that the rise was from rainfall. She added that "It's been steadily falling over the last 24 hours so that's showing that the water draining out of the basin hasn't had much of an impact, and basically the initial event for what water is draining out a bigger rise in the lake level over the next two days will be from the heavy rain we expect tonight."

Ferrin commented that the basin will need some hotter days for the basin to refill, and may take till later in the summer for snowmelt to get into the basin.