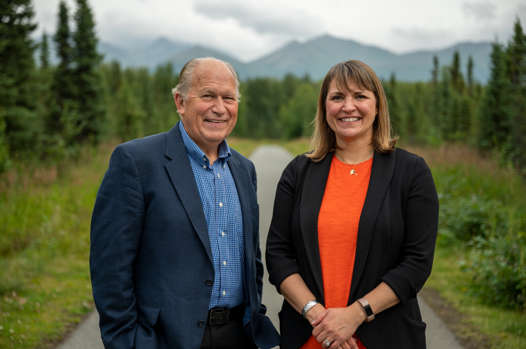 Juneau, Alaska (KINY) - In a release Tuesday, Former Governor Bill Walker and Former Labor Commissioner Heidi Drygas announced their candidacies for Governor and Lt. Governor. When asked what motivated his decision, he said that the motivation was built over the years as "we watched what was not happening, and what was happening."

In 2018 Walker had dropped his bid for reelection after the resignation of Lt. Gov. Byron Mallot.

Walker said his motivation to run was built over the years as he watched what was not happening, and what was happening.

"The instability that was being created by some of the decisions, some of the cuts that didn't seem to be appropriate, concerns about the Alaska marine highway system, university system, just general services across the state, PCE was certainly one," he said. "it just continued to grow and I just became worried about where we're headed."

During his term in 2016, he decided to reduce the size of the dividend Alaskans received from the state's oil-wealth fund amid budget deficits. He stressed that it was an extremely difficult decision. He was asked for his thoughts about the status of the PFD now.

"Each legislature since then has basically supported the decision, acknowledging that we have to have a sustainable dividend going forward in order to protect the fund itself," he said. "It was extremely difficult because the disparate impact on Alaskans across the state, but it was one that was necessary to protect the fund going forward. I mean, we have, the Permanent Fund is the golden goose like oil used to be and it needs to be protected."

Walker was asked about his fiscal plan for the state, he said his plan will be a continuation of what they ran out of time to implement, citing that his administration reduced the budget by 44% after numerous town halls in the state.

"I don't think that that's the answer to go in and say we're going to slash the budget, and we certainly wouldn't be bringing folks from outside of Alaska to do that as we've seen in this administration," he said. "The fiscal plan will be balanced. and it will be very sensitive to the different income levels and Alaska, the higher cost of living in rural Alaska. The key is it's got to be balanced, it's got to be sustainable, but not pulling any one lever too hard and making sure that does not hurt Alaskans in the process. So it's really a combination of things that, that need to be on the table, not just a single issue."

Walker's running mate Heidi Drygas, was the state's Labor Commissioner under his Administration from 2014-2018. She was asked what brought her into the ring, she said "because the Governor asked."

"The governor called and told me that he was considering running for election and he asked me to consider joining him in that effort, and it's not something I had thought about independently before," she said. "Both of us has seen what has happened in the last three years. It's been difficult to watch."

Drygas said she is primarily interested in bringing jobs back to the state, citing that in the last year the state lost 30,000 jobs.

"We need to rebuild Alaska, rebuild Alaska in so many ways, rebuild our infrastructure, bring back business, new investment, jobs, opportunities. We have so much potential in the state and we're squandering it right now, Alaska lacks vision, and I think we can bring that back to Juneau."

Walker joins incumbent Gov. Mike Dunleavy and Libertarian William Toien in the 2022 race. According to the Associated Press, Former state Rep. Les Gara, a Democrat, has said he’s weighing a run for governor.

Walker and Drygas were interviewed Tuesday following the announcement.