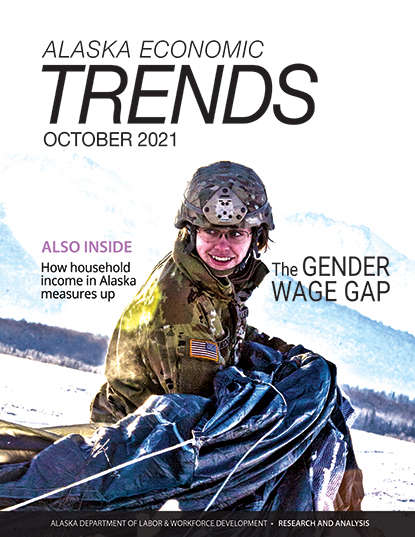 Juneau, Alaska (KINY) - The gender wage gap in Alaska has improved although a disparity still exists.

That subject is the featured article in the October edition of Alaska Economic Trends published by the State Department of Labor and Workforce Development.

Economist Karienne Wiebold of the department's Research and Analysis Unit  talked about the article she prepared while a guest on Action Line.   "When we looked at the difference between men and women's average annual earnings we saw that women earned 72 cents on the dollar compared to men and we saw that although men and women participate in the workforce in nearly equal rate, 49 versus 51 percent, that men earned more in almost 80 percent of over 800 occupations that we looked at here in Alaska."   Wiebold added that men earned more at every age and education level, and although women represented 49 percent of the state's workers, they received about 40 percent of the overall wages.

Even though a disparity persists, she said  there's been improvement.   "We can look back to the early nineties and see that the earnings ratio, so that average wage of men and women compared, was at 62 percent in the nineties and has been gradually increasing.  We saw a lot of stagnation through the 2000's where it kind of leveled off at 65 to 67 percent, but it has been improving over time."

Alaska's rank nationally has improved, according to the economist.  "We are more equal in 2019 than we were in 2015.  We've moved from 33rd to 10th, but does that represent any great gains for Alaska workers overall?  That's questionable.

The gain by women can be attributed in part to men's losses during the state recession.  Between 2014, right before the recession, and 2016, women's average earnings grew from 67 percent of men's to 71 percent.