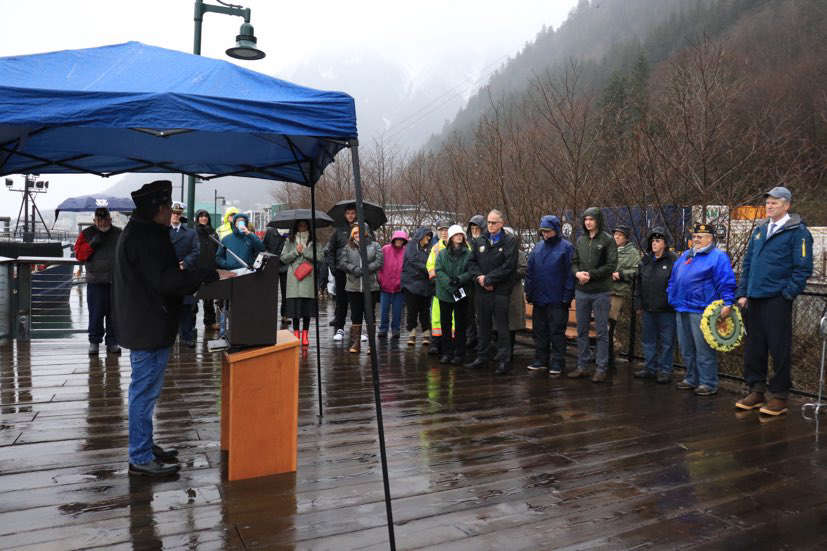 The event, marking the 80th anniversary of the ship's sinking, took place Sunday at the USS Juneau Memorial at the Seawalk on South Franklin at 1 p.m.

"We were honored to have a battlecruiser, a light cruiser named after USS Juneau. The USS Juneau served distinguishably. I'd just like to mention that they earned five Battlestars for her participation in the Solomon Islands VLAN, Falsey Tunnel all raid on five October 1942, the Battle of Santa Cruz islands, 26 October 1942, and the Naval Battle of Guadalcanal 12th of November 1942. December 7, 1941, was the bombing of Pearl Harbor. And our country committed itself full-heartedly and threw itself into the war. And many people feel the Battle of Guadalcanal was the turning point of the Pacific."

Docks and Harbors Port Director Carl Uchityl spoke to the history of the memorial.

"On July 5th, 1987, the USS Juneau memorial at the former site near the visitor center was erected by the City and Borough of Juneau with contributions from the Juneau Festival Association, VFW Post 5559, American Legion Taku Post 25, Rhinestone Construction and the citizens of Juneau and Douglas. The memorial featured a flag standard which is the flagpole, a plaque describing the sinking event, and two plaques with the name to the men lost in battle. That original memorial needed to be removed for the construction of the new visitor center. With the new building, covered shelter, planters, and new art, there was not an appropriate location to reinstall the memorial. It was determined that this location along the seawalk was more fitting. This new memorial features a salvage flag standard and the plaques from the original memorial, and was dedicated 10 years ago, on November 13th, 2012."

Uchityl said the USS Juneau was sunk during the battle of Guadalcanal, and on board were five brothers.

"The USS Juneau was a U.S Navy Atlanta class light cruiser built by federal shipbuilding company Kearny, New Jersey. It was launched on October 25th, 1941, with Mrs. Harry Lucas, wife of the Mayor of the City of Juneau attendee. The ship was commissioned on February 14th, 1942, with Captain Lyman Swenson in command. The USS Juneau sank in the Battle of Guadalcanal on November 13th, 1942. In total, 687 men including the five Sullivan brothers perished. Only 10 men survived." 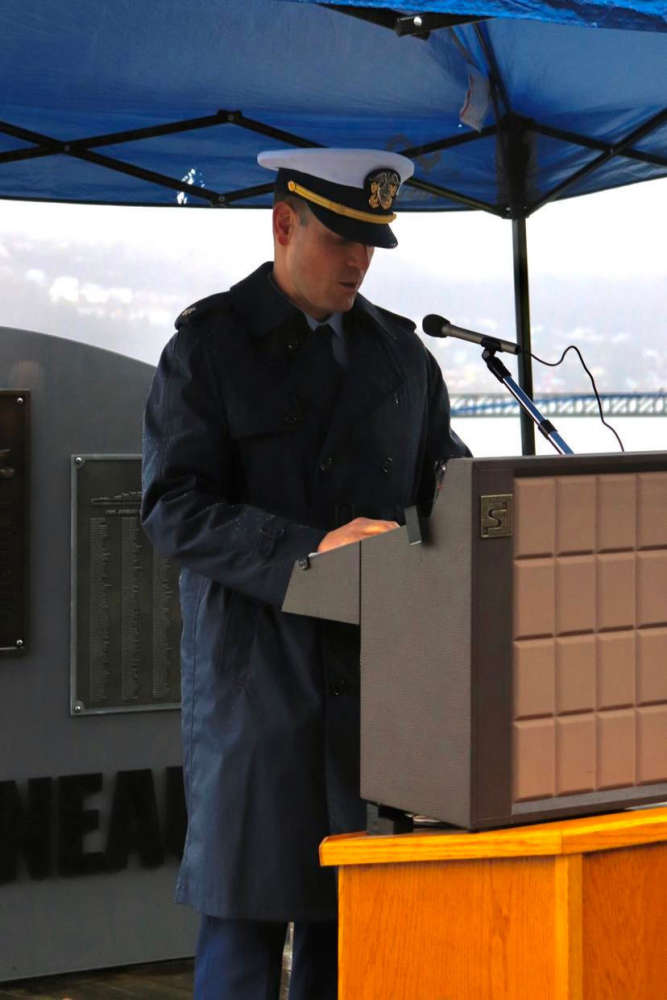 Above: Lieutenant Commander Chris Sutton of the US Navy, the chaplain for the 17th US Coast Guard gave the invocation and benediction. Below: Gov. Mike Dunleavy speaks about the USS Juneau. 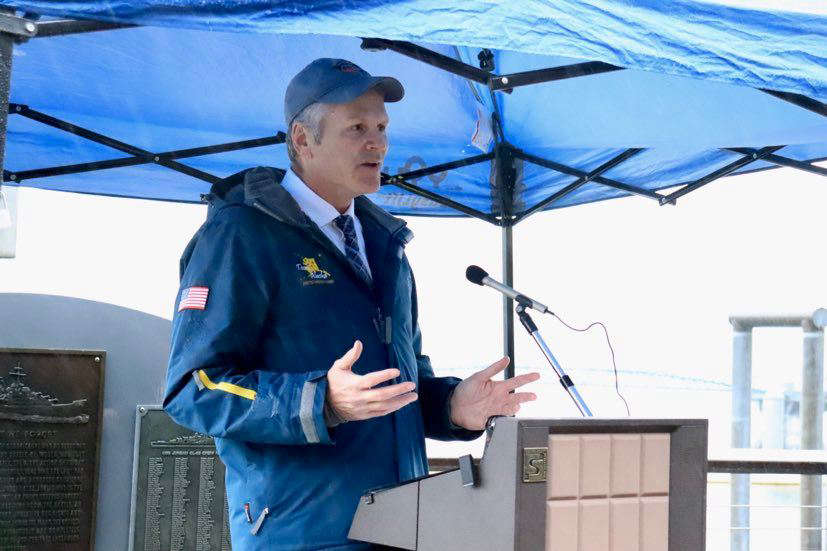 Gov. Dunleavy attended the memorial and gave the keynote address.

"This fighting ship named after the great state of Juneau took part in a war many years ago, the 80th anniversary. When you think about if you could put yourself in the place of the Navy sailors on that ship, a lot of those kids were 17 years old. 18 years old, 19 years old. During this pivotal battle, because these were dark times during World War Two, we had suffered a major defeat in Pearl Harbor. We didn't know what the outcome was going to be. And our sailors and our soldiers didn't know what the outcome was going to be. But they heeded the call. And the Juneau was in the South Pacific, as was mentioned the Santa Cruz Island island, Guadalcanal and they were screening for at least two aircraft carriers that were sunk at that time, the Hornet and the Wasp. They rescued about 1600 men off of one of those sinkings." 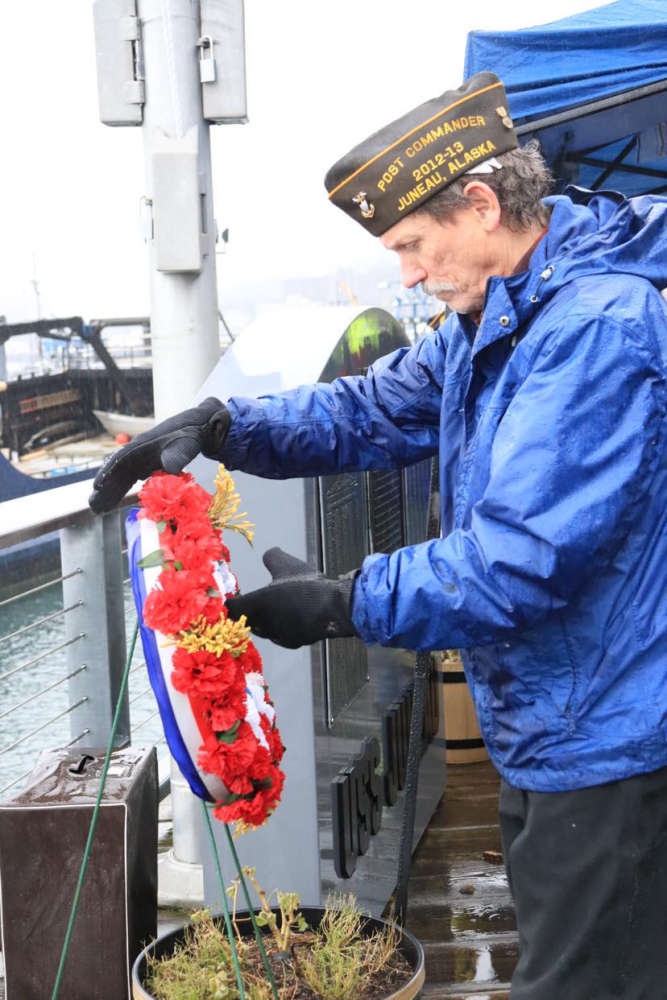 Above: VFW Dan McCrummen lays a wreath in remembrance. Below: Mitchell (right) observes a moment of silence in the rain. 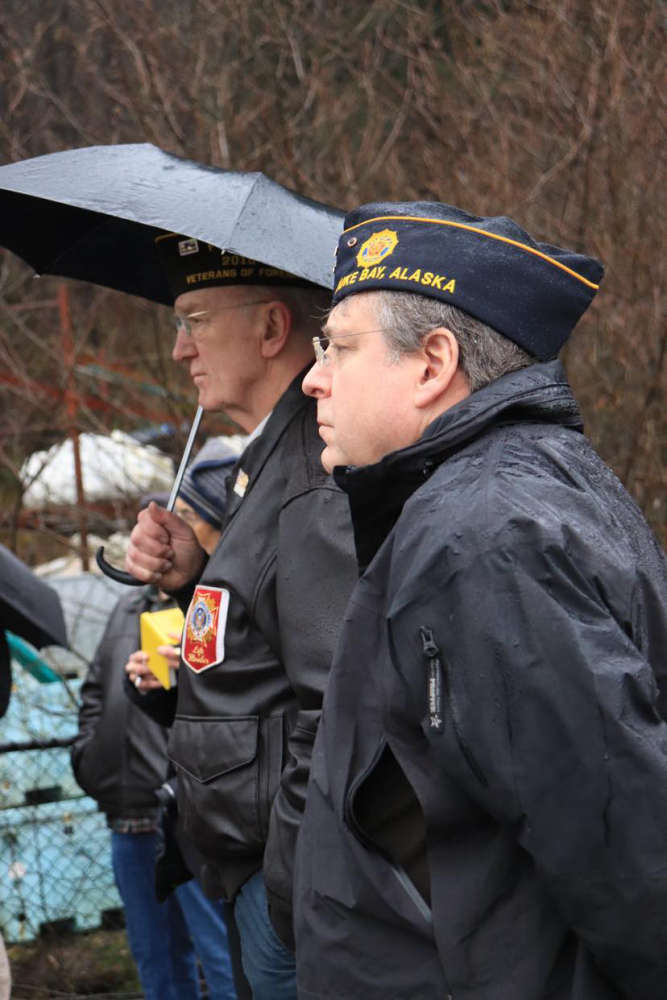