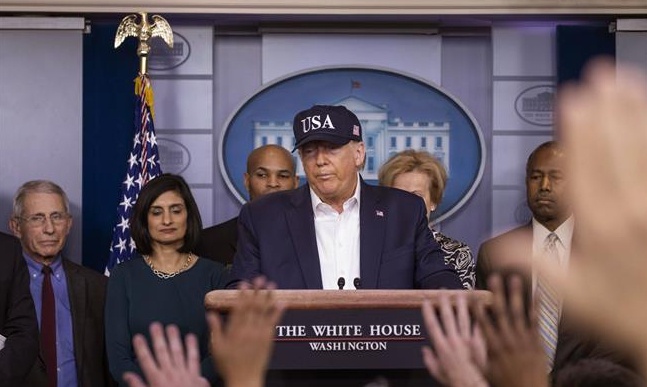 President Donald Trump speaks during a news conference about the coronavirus in the James Brady Briefing Room at the White House, Saturday, March 14, 2020, in Washington.

Washington, DC (AP) - President Donald Trump announced Saturday that the United States will broaden its European travel ban, adding Britain and Ireland to its list, and was considering imposing restrictions on travel within the U.S. to areas hit hard by the coronavirus spread.

Under the restrictions on European travel, American citizens, green card holders, and others are still allowed to return home to the U.S. but will be funneled to 13 airports and be subjected to health screenings and quarantine orders.

“If you don't have to travel, I wouldn't do it," Trump said. After days of reluctance, he also said he had taken the coronavirus test following several interactions with people who are infected. The White House began testing the temperatures of everyone who's been close to Trump; he said his own temperature was normal and he was feeling fine.

Early Saturday the House approved legislation to provide direct relief to Americans suffering physically, financially and emotionally from the coronavirus pandemic. The Senate still must vote on the package. Trump has thrown his support behind it.

On Friday, Trump declared a national emergency, unleashing as much as $50 billion for state and local governments to respond to the crisis.

The new travel restrictions come as Britain has seen its death toll from the virus nearly double from the day before to 21, and the number of people infected rise to over 1,100 from about 800 the previous day. Ireland had 90 confirmed cases and one death by Friday. The Irish government hasn't released any updated figures since.

The U.S. said earlier in the week a 30-day ban on flights covered only the 26-nation Schengen area, the European Union’s border-free travel zone, which excludes Britain and Ireland. Vice President Mike Pence said the restrictions on Britain and Ireland would go into effect midnight on Monday night.

Pence added that administration officials were “considering a broad range of measures” for potential domestic travel restrictions but no decisions have been made.

Britain has taken a different approach as countries across Europe and around the shut schools and universities, scrap sports tournaments and shutter bars and restaurants. The British government hasn’t yet restricted everyday activities of residents by banning large public gatherings or suspending transit networks. However, domestic media outlets reported on Saturday that authorities were considering banning gatherings of 500 or more people as early as next weekend.

Britain’s strategy is based on the presumption that most people in the country will eventually get the virus, and severe measures to contain it are unlikely to work. Patrick Vallance, the British government’s chief scientific adviser, has said the U.K. was “about four weeks or so behind Italy,” where more than 15,000 infections and more than 1,000 deaths were recorded in only three weeks.

Schools in Northern Ireland were operating as usual but across the border in the Irish Republic, schools, colleges, daycare centers and cultural institutions were closed.

Trump also announced a range of executive actions, including a new public-private partnership to expand coronavirus testing capabilities with drive-through locations, as Washington tries to subdue the virus whose spread is roiling markets, shuttering institutions and disrupting the lives of everyday Americans.

But he asserted “I don't take responsibility at all" for the slow rollout of testing.

The House passed the bill after midnight on a bipartisan vote, 363-40.

Trump tweeted his approval, all but ensuring that wary Republicans would join with a robust vote. “Good teamwork between Republicans & Democrats as the House passes the big CoronaVirus Relief Bill," he tweeted Saturday. "People really pulled together. Nice to see!”

The crush of activity capped a tumultuous week in Washington as the fast-moving virus left ordinary Americans suddenly navigating self-quarantines, school closures and a changed way of life.

Trump took a number of other actions to bolster energy markets, ease the financial burden for Americans with student loans and give medical professionals additional flexibility in treating patients during the public health crisis.

Central to the aid package from Congress, which builds on an emergency $8.3 billion measure approved earlier, are the free testing, sick pay and family leave provisions.

Providing sick pay for workers is a crucial element of federal efforts to stop the rapid spread of the infection. Officials warn that the nation’s healthcare system could quickly become overwhelmed with gravely sick patients, as suddenly happened in Italy, one of the countries hardest hit by the virus.

The ability to ensure paychecks will keep flowing — for people self-quarantining or caring for others — can help assure Americans they will not fall into financial hardship. The legislation also offers three months of paid family and medical leave. Small and mid-sized employers will be reimbursed through tax credits.

Both Treasury Secretary Mnuchin and Pelosi promised a third coronavirus package will follow soon, with more aggressive steps to boost the U.S. economy, which economists fear has already slipped into recession.

The financial markets closed on an upswing after one of the worst nosedives since 1987.

For most people, the new coronavirus causes only mild or moderate symptoms, such as fever and cough. For some, especially older adults and people with existing health problems, it can cause more severe illness, including pneumonia.

The vast majority of people recover. According to the World Health Organization, people with mild illness recover in about two weeks, while those with more severe illness may take three to six weeks to be over it.

Trump on Friday also told people to expect the imminent rollout of a web site "facilitated” by Google that would guide users through a series of questions to determine whether they should be screened for the virus. If testing is recommended, users would be directed to a local testing location, which could include parking lots at Walmart, Target, Walgreens and other chains.

“It's going to be very quickly done, unlike websites of the past," Trump said in a thinly-veiled dig at the Obama administration's disastrous rollout in 2013 of its online health care marketplace.

But how quickly is in question. Google said the website, from its life science division Verily, is still “in the early stages of development." Verily first plans to roll out testing out in the Bay Area of San Francisco, with the hope of expanding more broadly over time, the company said in a statement.

The Pentagon and State Department announced new guidance aimed at limiting movement of its personnel and promoting social distancing in hopes of reducing the impact of the pandemic on the agencies.

The State Department announced it has begun rotational and telework schedules and issued general guidance calling on domestic and overseas personnel to engage in “mission-critical” travel only.